Patrick Hall has learned during his fitness career to give the people what they want. In his most recent reincarnation of Hybrid Fitness, that means Ninja Warrior obstacle courses for kids.

Three years ago, Hall converted his downtown gym into a Ninja Warrior training center after he appeared on the fifth season of the popular “American Ninja Warrior” TV series. He switched the all-ages fitness center, at 475 Ellicott St., late last year into a spot just for kids and teens. This weekend, he’ll open a second Hybrid Ninja Academy in Lancaster.

“The demand for kids’ Ninja Warrior just exploded,” he said. “It became very difficult to juggle the needs of the adult obstacles and the needs of the kid’s obstacles. I found myself during the course of a couple of hours having to reconfigure the downtown gym.”

An open house will take place from 5 to 8 p.m. Saturday, June 3, at the suburban gym, 2500 Commerce Parkway. Children ages 4 into their late teens are welcome to try the new obstacles. One child will win a free family all-access annual membership to both gyms, valued at $1,100. For more info and rates, see hybridfitnessbuffalo.com. 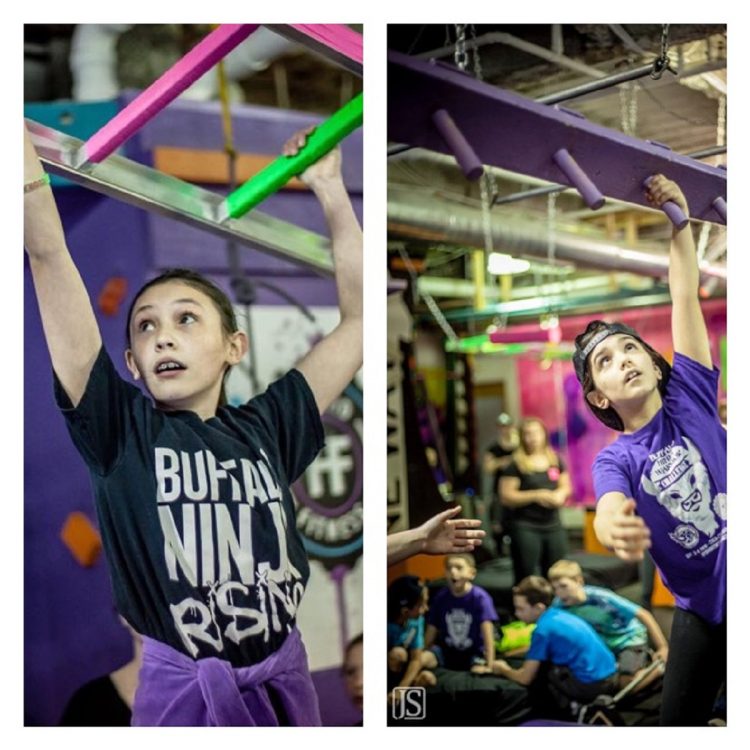 About 200 kids competed last year in the finals. Hall's daughter, Sydney, 11, came in ninth in the 9- to 12-year-old category. Grace Santiago came in fourth in the country for 6- to 8-year-olds. Grace wears a baseball hat sideways and calls herself the Hip-Hop Ninja.

"Our travel team went to a national competition in Philadelphia and kids knew of the Hip-Hop Ninja through Facebook," Hall said. He added that his gyms serve kids who want to compete or just have fun.

"We’ve seen a big fusion of kids from other sports who’ve started to become Ninjas because of how fun it is and how individual the success can be," Hall said.  "There are definitive measures of success that children can feel."

Nora Santiago said Grace, her daughter, has thrived in the gym – along with others who have caught the Ninja bug.

"It’s a natural outlet for children," she said. "Think about what kids love to do in the middle of the school day: go play on the playground. What is this but a glorified playground? Kids are more suited coming into this than a grownup coming in.”

"Rich is someone who knows how to build," Hall said, "so we collaborated on the design and what to work."

"We held 254 Ninja Warrior kids birthday parties downtown last year," Hall said. "A lot of calls came from parents in the suburbs who wanted something a bit closer. A lot of those calls came by way of Lancaster and Clarence."

The ceilings in the new 3,000-square-foot warehouse space are 16 feet. It has the feel of an open indoor playground.

"The downtown gym has 12-foot ceilings," Hall said. "The new gym is about 50 percent bigger. We have a parking lot here, too. We’ve taken those staple Ninja Warrior obstacles and scaled them for the kids. Another thing the space has allowed us to do is really build for kids and give them the level of satisfaction and feeling of achievement."

The new Hybrid Ninja Academy in Lancaster has obstacles that will be familiar to those who watch "American Ninja Warrior" on NBC. Many of them have been scaled down for kids.

"A 6-year-old can run up the shortest Warp Wall – something that might be a decade away from the wall used on the show," Nora Santiago said.

She also likes the sportsmanship and inclusiveness in the Ninja gym.

"The best thing about Ninja as a parent," Santiago said, "is that if you watched the show you would notice that all the top stars are always cheering each other on.

"You want somebody to beat an obstacle. That is replicated in the gym with these kids. You can feel when a kid is about to have a moment, and everybody will stop and watch them and start cheering them on. Even when you get into a competition and know a person might beat you, you still know that every kid is there cheering everybody else on. It’s such a great community. It builds everybody up in such a great way because it’s always the person against the obstacle, the person against himself."