NASHVILLE -- Pete Weber was one of the most familiar voices in Buffalo sports through most of the 1980s and '90s. For the past 19 years, he has held the same stature with folks here in Middle Tennessee.

Since the franchise began in 1998, Weber has been a play-by-play man for the Nashville Predators on either television or radio. Through the wild early days of a fledgling team and through the dark days of 2007 when it seemed a move to Hamilton, Ont., was imminent, Weber has been the constant.

He's in his usual spot behind the mic this week as the Predators play in the Stanley Cup final for the first time in their history. They trail the Pittsburgh Penguins, two games to none, heading into Game Three Saturday in Bridgestone Arena, and Weber is more than ready for the team's first home game on hockey's highest stage.

What will it be like Saturday night in the place known at the start of every Weber broadcast as "Beautiful Downtown Music City USA?"

Just for kicks, Weber has a decibel reading in his booth.

"I know I might as well just put a 747 jet engine in my garage and rev it up, because that's what the noise level is going to be like inside the building," Weber said this week.

The Guinness Book of World Records is reportedly going to be watching for the all-time indoor arena decibel record of 130.4 to be broken. Weber said Preds fans pushed 129 during Game Six of the Western Conference final against Anaheim and will be going for the mark set in February by basketball fans from the University of Kansas.

"By Saturday, most Middle Tennessee voices will be recovered to regenerate such force," he said. "I've had the meter since our Chicago series in 2010. It's to the point I'm grateful I wear a headset during the broadcast."

Weber, 66, is an Illinois native and Notre Dame grad who spent 13 years as the play-by-play man for the Bisons but also served stints as the Sabres' radio man and a Bills analyst/host during the Super Bowl years. He was also a host on WEBR Radio and the Empire Sports Network.

He has loved his time in Nashville but nothing prepared him for the elation he felt when the Predators wrapped up the West title. He had no call planned and simply intoned, "Sit down if you need. The Nashville Predators are going to the Stanley Cup Final."

If the Preds rally in this series to win the Cup, Weber won't have anything planned either.

"I did that once when we finally won a playoff series the first time in 2011 against Anaheim," he said. "I had to call upon Rocky and say, 'Yo Adrian, they did it.' That was an incredible night too. It's hard to believe that's six years ago now.  But if they win, I'll just have to go from the heart."

"Sit down if you need. The Nashville Predators are going to the Stanley Cup Final" - @petewebersports to all you #Preds fans out there! pic.twitter.com/6Umrn4jYlg

Weber admitted as the final seconds ticked down and the Predators scored two empty-net goals, he was flooded with thoughts of the last 18 years. And speaking of the heart, it included the heart attack he suffered during a morning skate in 2014 in Minnesota.

"The first thought I had was 10 years ago, to how close this came to not happening and to the team leaving," he said. "What a shame that would have been had all this been short-circuited at that point in time. To those of us who have been here since 1998, there was a lot of post-game picture posing in the dressing room around the Campbell Trophy and that was kind of fun. A lot of knowing glances about what everyone had been through to get to this point."

One of those originals is former Sabres forward Brent Peterson, a longtime assistant coach with the team who has transitioned into Weber's radio analyst the last two seasons as he wages a very public battle with Parkinson's Disease.

"It's a privilege to work with him," Peterson said. "He has a great command of the English language, and his voice can go from 0 to 60 in two seconds. A guy is skating down the wall and all of sudden Pete can go to the top of his lungs, 'And he scores!' You have to listen to him every day to really appreciate it."

Weber's career outside of the NHL is quite a trail. He has called games for the Seattle SuperSonics, Notre Dame, the University at Buffalo and USA Hockey for Mutual Radio at the 1984 Sarajevo Olympics. He was an analyst and host of Bills broadcasts during the Super Bowl years and called Triple-A baseball in both Albuquerque and Rochester.

In Buffalo, he's best known as the voice of the Bisons from 1983-1995, carrying the franchise through the halcyon days where fans rediscovered War Memorial Stadium (especially during its 1987 farewell season), and were enthralled by the 1988 opening of Pilot Field.

He is an encyclopedia of Buffalo sports, with a digitized collection of audio from his work that you can spend hours going down the wormhole listening to.

"One thing about Pete is that he has a photographic memory that's amazing," Peterson said. "He looks at the lineup once and he can remember it all, and I seem like I have to look at it all day to remember one guy."

The job in Nashville reconnected Weber with another original Predator in Gerry Helper, now the team's senior vice president and senior advisor. Helper worked in the Sabres' media relations office from 1979-1986. Weber worked as an analyst for the Los Angeles Kings from 1978-81 before staying in Buffalo for good in the early '80s.

Helper was familiar with start-ups, having come to the Preds from the Tampa Bay Lightning's 1991 expansion season. He knew hockey and broadcasters and essentially became the keeper of tapes and resumes. The pairing of Weber and longtime NHL player and coach Terry Crisp became an instant hit and lasted for 17 seasons. 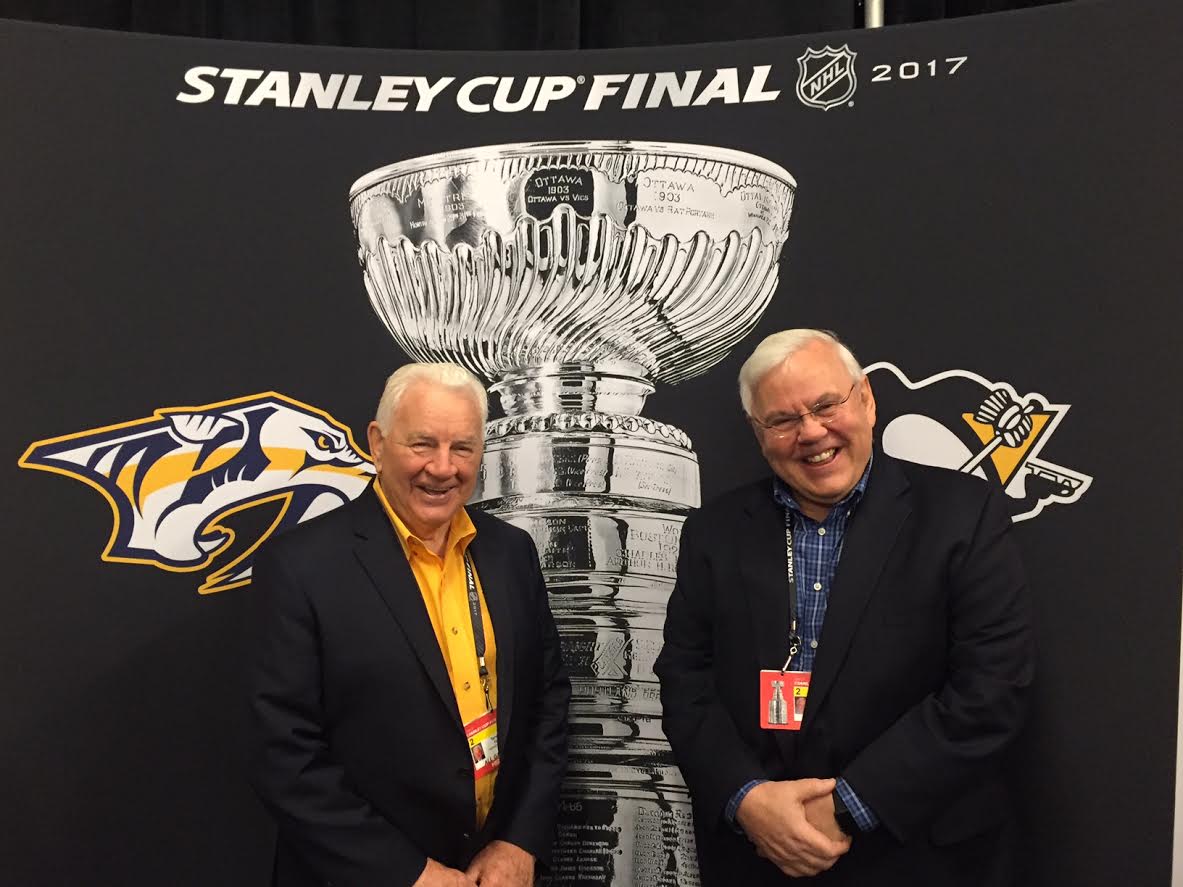 "We wanted to have the right personality to be a bit of a preacher and someone who understood it was more than showing up to do the games," Helper said. "In an expansion situation, your broadcasters are often going to be a constant for the first several years, at least until you start getting players who are going to be setting down roots. They're the constant link with your fan base. And I knew Pete's personality was such he could handle anything. He's unflappable."

Weber got the job thanks mostly to a whim. He met his wife, Claudia, in 1985 at a Sabres game in Memorial Auditorium and courted her over summers in War Memorial Stadium with late Bisons host Frank "Fremo" Vallone providing bullhorn warnings to him when she would arrive. Claudia's parents live in Knoxville, roughly a three-hour drive from Nashville.

"I was upstairs in my home office in Kenmore reading that high-speed Prodigy service and saw that provisional franchises had been awarded to Nasvhille, Atlanta, Columbus and St. Paul," Weber recalled. "I said to Claudia, 'Boy, with your family in Knoxville wouldn't this make holidays a lot easier?'"

In the early days of the franchise, Weber did any rubber chicken dinner the team could put him on to pump the Preds. He also joined Crisp in hosting what the team called "Hockey 101." They were classroom sessions designed to teach Tennesseans who grew up on college football and NASCAR the finer points of hockey.

Weber and Crisp were the voices of the team until changes were made in 2015 and Weber was moved to the radio side as the broadcast was split. Fans were initially unhappy but Weber immediately thought of a positive: He would no longer be forced to the sidelines after the first round in favor of NBC if the Preds advanced.

"Aside from the fact I truly love radio, that was the biggest selling point for me," he said. "That was huge for me. The Penguins did the same thing with Mike Lange, and both of us are grateful to be able to still call these games in this series." 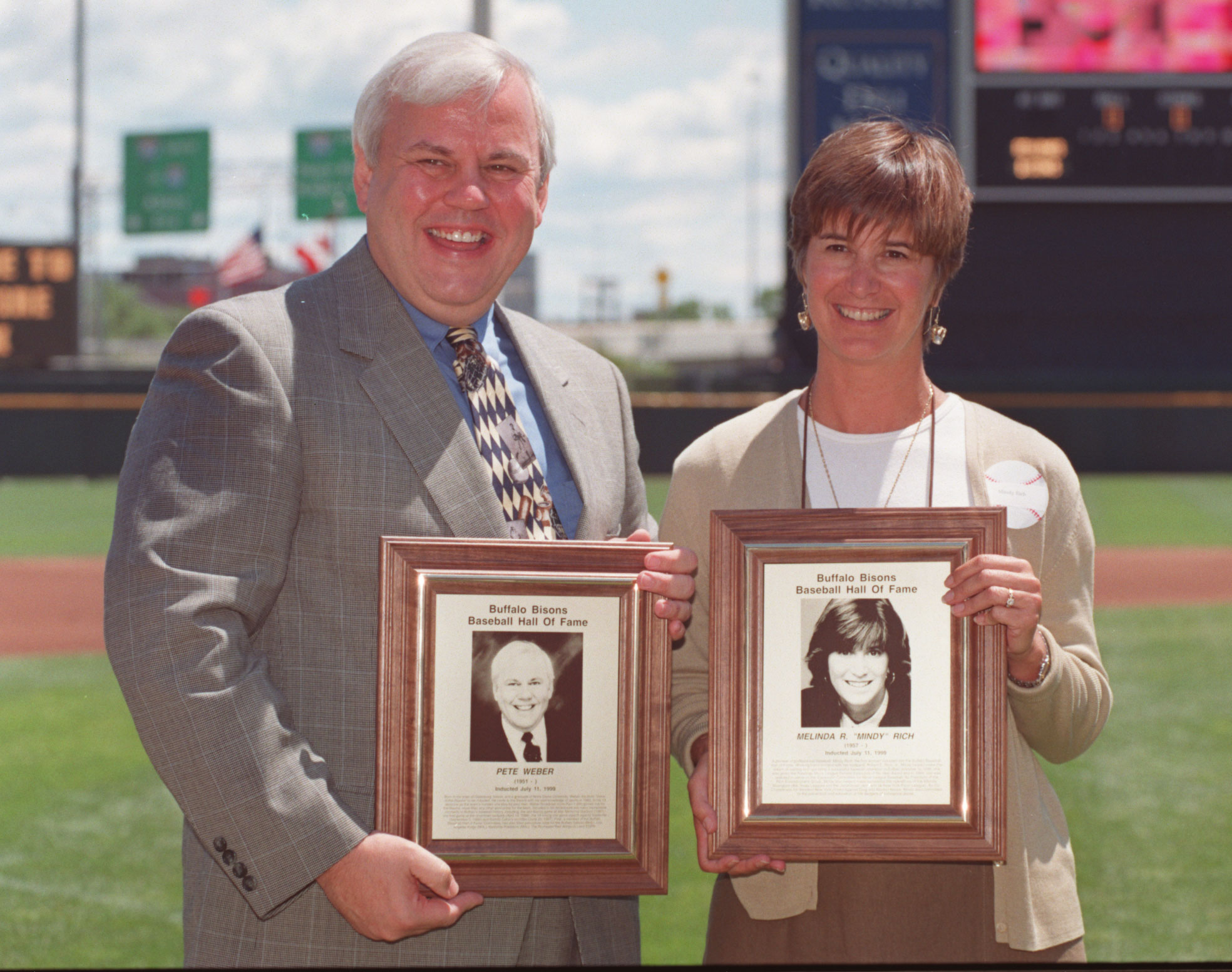 Weber and Mindy Rich are inducted into the Buffalo Baseball Hall of Fame in 1999 (Harry Scull Jr./Buffalo News file photo).

Weber, who was inducted into the Buffalo Baseball Hall of Fame in 1999, spent Sunday night at PNC Park watching the Pirates-Mets game and visiting with Mets manager and former Bisons skipper Terry Collins as well as Pirates announcer Greg Brown, his sidekick with the Herd from 1989-1993.

Any sidekick becomes a friend of the gregarious Weber. Last week, he and Crisp toasted the 28th anniversary of Crisp's 1989 Stanley Cup championship as the coach of the Calgary Flames. Weber first met Peterson as a player in 1981 with the Sabres while doing intermission interviews. They became friends when Peterson joined the Predators as an assistant coach in 1998.

"He's a guy we've been through a lot with," Weber said. "I'll never forget his news conference 15 years ago when he revealed his diagnosis and what he's gone through. We've become such close friends and it's been a delight to be able to work with him and have this experience."

"It's my first time to the final as a player or a coach or broadcaster and his first time too," Peterson said. "That makes it very special. Pete makes it so much fun and I try to make it fun too. You can't get too serious on this thing. I know if you lose, it's people's jobs. But what we're doing is embracing the moment, and it's been fantastic for Pete and I."