It's not just nearly three feet of extra water that's washed ashore off Lake Ontario, wrecking properties along the waterfront in Niagara County.

Nearly three feet of extra politics has washed ashore, too.

According to politicians as ideologically opposite as Rep. Chris Collins and Gov. Andrew M. Cuomo, all that flooding is happening, at least in part, for a man-made reason: an international regulatory body's decision to allow Lake Ontario to get just a bit more full during wet times to protect the region's wetlands.

They blame Mother Nature, and the torrent of rainfall let loose on the region all spring.

In other words, one of the defining disagreements of 21st century America – one that puts politicians on one side and scientists on the other – has arrived in Western New York.

Just as President Trump Thursday withdrew from a worldwide agreement on climate change, Collins in particular wants the IJC to abandon Plan 2014 despite what the scientists who wrote it say.

"While we don't agree on much, I share Governor Cuomo's opinion that the IJC blew it with Plan 2014," Collins said. "Now we need to work cooperatively at all levels of government to get this plan stopped once and for all."

The debate over Plan 2014 intensified this spring amid a backdrop of flooding both along New York's Lake Ontario coastline and up the St. Lawrence River in Montreal.

No one can debate the extent of the damage. Cuomo has already set aside $7 million to repair damaged homes along Lake Ontario, where all that water has submerged docks, eroded breakwaters and left some waterfront homes as islands, surrounded by unwanted moats. Meantime, Radio-Canada reported that more than 2,700 homes have been flooded in the Montreal area.

Cuomo and Collins both blame the International Joint Commission – the binational body that oversees the waters shared by the United States and Canada – at least in part for the flooding.

That plan gives an international board an entirely new way of regulating water levels in Lake Ontario. Two dams in the St. Lawrence make Lake Ontario – the basin into which the rest of the Great Lakes drain – the only one of the Great Lakes whose level can be regulated at all. And Plan 2014 aims to do a better job of that by allowing for higher highs and lower lows than the plan it replaced.

The new rules call for the board that manages water levels to allow Lake Ontario to be 2.4 inches higher during the wettest times and eight inches more shallow during dry times, all because that natural cycle of wet and dry times helps preserve the region's wetlands. Plan 2014 also gives the board that sets lake levels less leeway in determining how high the water should be, instead setting them by prescribed formulas. 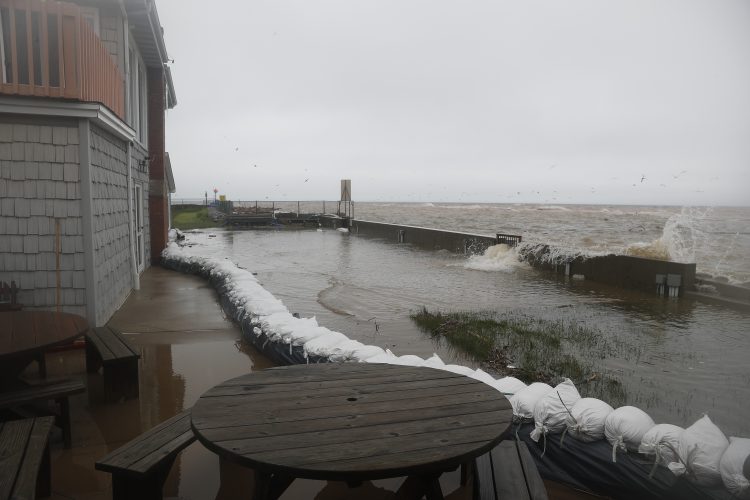 Sandbags are set out around the Olcott Yacht Club to hold back flooding by the marina. (John Hickey/News file photo)

Implemented in January, Plan 2014 clearly is not working, Collins said.

“Plan 2014 increases the frequency of raising and lowering the water levels in Lake Ontario, and this fluctuation in levels has proven detrimental to the businesses and homeowners along the shoreline," Collins said. "Higher highs and lower lows have always caused problems and this plan only makes matters worse."

Cuomo, a Democrat, isn't a fan of the IJC either.

"There’s no doubt that the IJC blew it," Cuomo said, earlier this week. "I mean they blew it. I don’t see how you can’t debate that. And I understand that they have a lot of concerns that they have to deal with, and they’re dealing with Canada and Montreal and St. Lawrence. I represent the people of the State of New York. And the people of the State of New York are getting the short end of the stick, right? And their homes are getting flooded."

For example, when told that U.S. politicians blamed Plan 2014 for the flooding, Gail R. Favari – secretary of the Canadian Section of the International Lake Ontario-St. Lawrence River Board – laughed.

"That's what politicians do," she said, meaning they cast blame.

But she and several other scientists cast blame, too – on the weather.

They noted that it was a weird winter and a wet spring, and said those two odd seasons combined to wreck the Lake Ontario beach summer.

Remember all those warm spells following cold spells during the winter? The same thing happened around the St. Lawrence River, which serves as a funnel channeling the water from Lake Ontario out to sea.

As a result, the St. Lawrence froze over and thawed out five times between January and March – a situation that Keith Koralewski, an Army Corps of Engineers water management expert and adviser to the board that sets the lake levels, called "unprecedented." 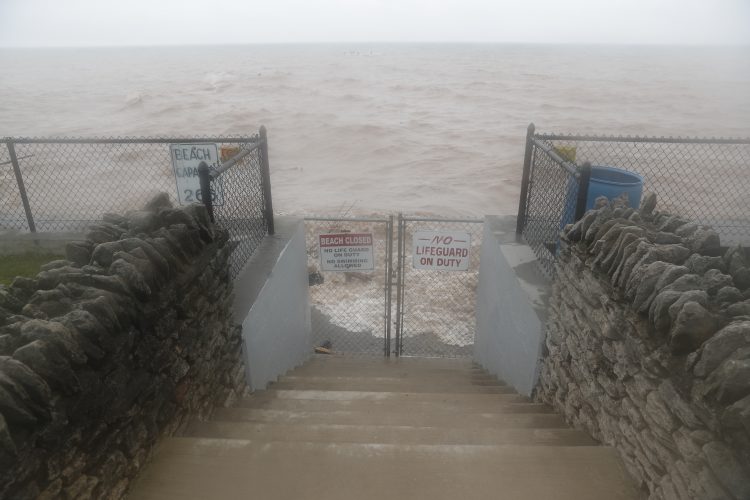 Waves break at a gated entrance to the lake at Krull Park in Olcott. (John Hickey/News file photo)

That situation complicated matters for the water management experts to try to regulate Lake Ontario. Favari said water managers like it when the ice on the river freezes solid and deep. When that happens, the river acts "like a pipe" that can swiftly carry excess water from the lake out to the Atlantic, she said.

Critics of Plan 2014, such as Anthony McKenna, an engineer who chairs the Niagara USA Chamber Legislative Committee, argue that the water control board could have pushed more water out the St. Lawrence under its old regulatory system, but that it had its hands tied by the new regulations early this year.

But Favari and Koralewski said that even under the old regulatory system, the water control board would have diverted no more water up the St. Lawrence in February or March, just because it would have been dangerous to do so. That's because when the St. Lawrence freezes and thaws and refreezes again, sending more water up the river could create ice jams that would send flood waters pouring over the riverbanks.

Due to those conditions along the St. Lawrence, the water control board had no choice but to allow Lake Ontario to get about a foot higher than normal by the end of March, the board said.

And then the rains came, and came again.

April proved to be 150 percent wetter than normal in parts of the Lake Ontario and Ottawa River basins, the water control board said.

All that water poured not just into the lake, but also into the Ottawa River, which links up with the St. Lawrence south of Montreal. The result: flooding along the Ottawa River in late April and the Montreal area in early May.

With the worry about ice jams abating as the weather warmed, the water control board finally increased water flows into the St. Lawrence on April 24, but only to a limited degree because flooding concerns were already increasing in Montreal.

If the board had really turned on the spigots in the St. Lawrence, "there would have been catastrophic flooding in Montreal," Koralewski said.

Then came May – a month where some parts of the Lake Ontario region got three times as much rain as usual. The result: Lake Ontario rose to 33 inches above the norm, flooding the shoreline, while thousands of Montreal-area residents had to be evacuated.

A year after wilting under dry heat, crops threatened by too much rain

"There was nothing the regulators could have done" to stop the flooding, said Bill Warick, a Buffalo native, former Army Corps official and now a consultant who spent years working on Plan 2014 for the IJC. "I know the IJC didn't blow it. It was unavoidable."

Warick said this year's wet weather appears to be part of a long-term cycle that also brought flooding to the lake in 1993, 1973 and 1952.

McKenna, the chamber of commerce official, disagreed, saying this is the greatest flooding he had ever seen and that Plan 2014 must play a role in it.

"They were warned by a number of us" that the plan didn't give regulators enough flexibility to prevent flooding, said McKenna, whom Collins' office cited as a source on the issue.

Meantime, Cuomo's Environmental Conservation commissioner, Basil Seggos, offered a slightly different take on things, saying the water control board should have acted to prevent the flooding.

"They still have the opportunity to make extreme diversions (of water) under extreme conditions," said Seggos. He also said the federal government should have provided some money to mitigate the annual damage that the IJC predicted would happen along Lake Ontario's southern shoreline.

When asked about the great lake flooding debate, Rep. Louise M. Slaughter, D-Fairport, an epidemiologist before entering politics, took the side of scientists once again.

"The Army Corps and IJC have been clear that there would have been similar (water) flows under the old plan and that under the new plan water levels are possibly an inch lower," she said. "Present water levels are due to the extraordinary rainfall, melting snow, and the fact that Lake Ontario acts as a drain lake."

She added: "Anyone who blames current conditions on the new plan is playing politics."