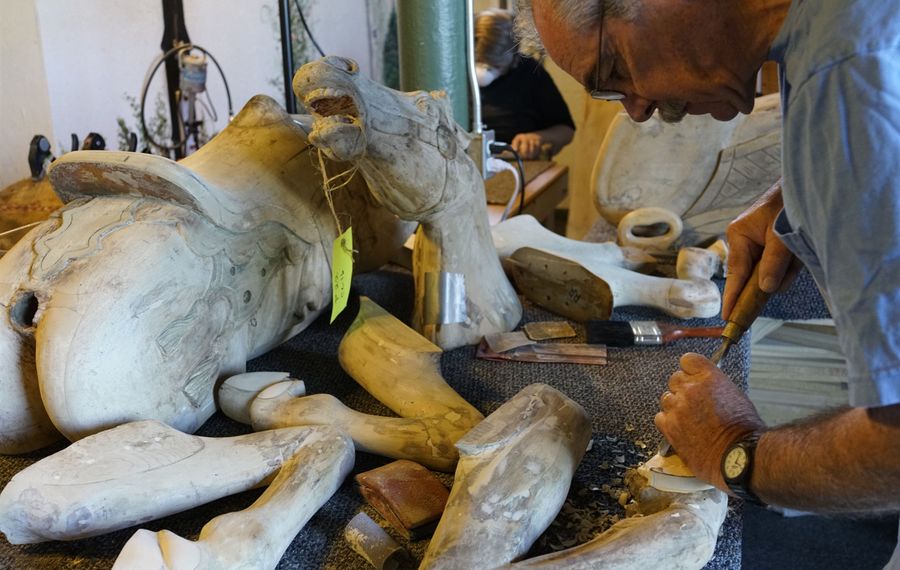 After 93 years, the animals in the park-style carousel coming to Canalside in 2018 are back in North Tonawanda, a few blocks from where they were built.

On Thursday, a dozen volunteers for Buffalo Heritage Carousel were at work restoring three of the 31 Spillman Engineering Co. animals that until recently had been stowed away in storage since 1956.

"They will leave this building just like they left the factory down the road here in 1924," said Patrick Stanczyk, a master carver and carousel restoration specialist.

He's responsible for repairing the wooden animals and preparing them for final painting.

"The construction will be better because of the epoxies we use," he said. "The figures will have the primers, the base coat and top coat and look exactly like they did in 1924."

The menagerie was going to be restored at a carousel restoration company in Ohio, but delays in getting started interfered with the company's other commitments, leading to a change of plans.

Now, the horses are being repaired under Stanczyk and partner Rose Hirsch's guidance, and readied for the final decorative coat of paint. That will be done throughout the year by Rosa Patton, a National Carousel Association-recognized carousel restorer. She will be in town about once every two months to work on the animals and instruct volunteers. The first six animals are expected to be painted during the first week of August. 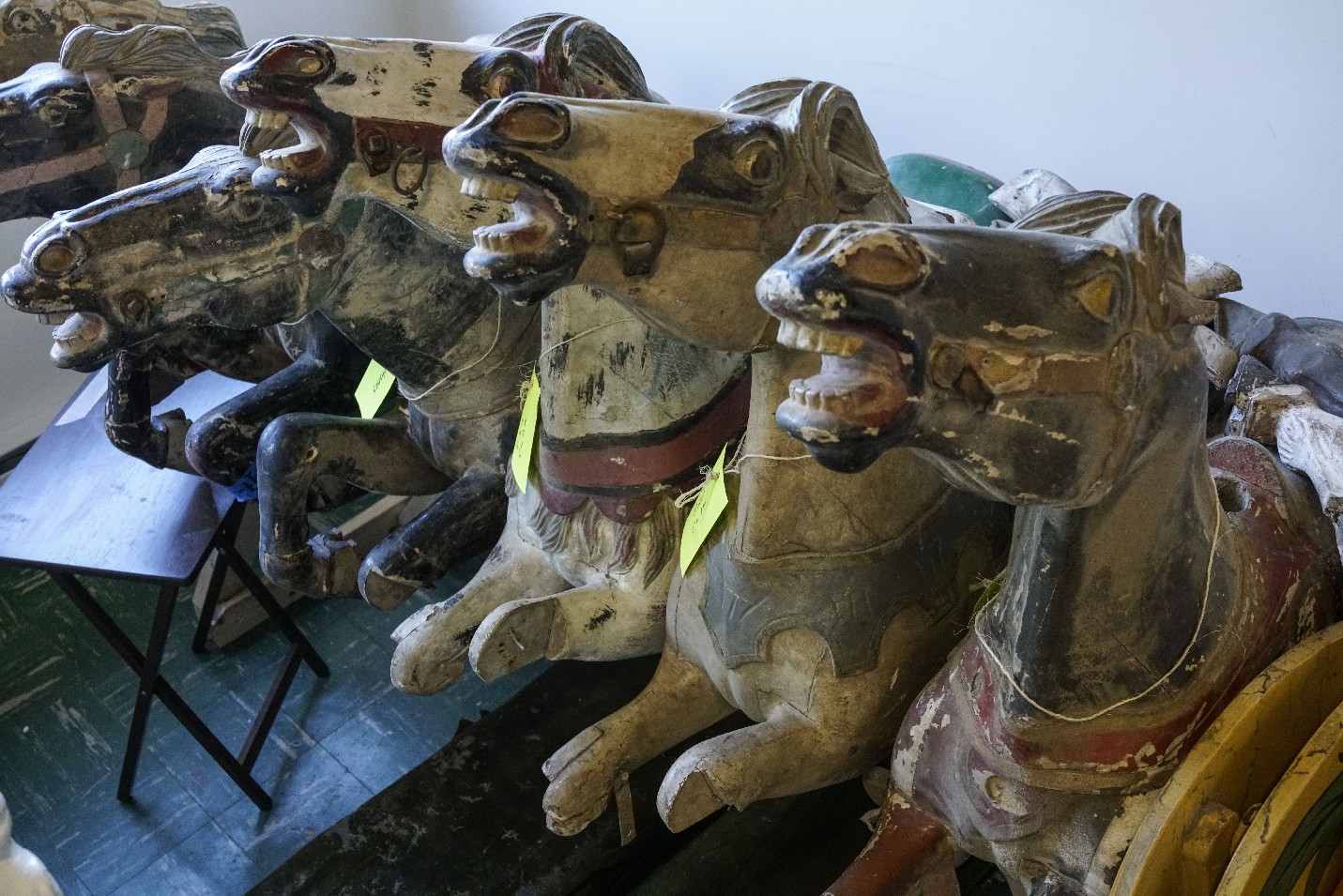 The carousel horses waiting to be restored. Click on the photo to view more images. (Derek Gee/Buffalo News)

The mechanicals, rounding board and scenery panels are being repaired at Carousel and Carvings in Marion, Ohio. The company will also repair a rare rocking chariot and create an Erie Canal barge chariot to go with Sal the Mule, a Herschell-Spillman piece acquired from a collector.

Despite the decades of storage, only one of the wooden animals had dry rot. Overall, they're in good condition, Stanczyk said.

"The wood itself is in very good shape," he said. "The joints are compromised."

Work on the animals begins in a stripping booth, a small room where hide glue and nails or screws used to assemble them are removed. Heat is used, but no chemicals. Workers use respirators, wear body suits and take other precautions in case the animals contain lead paint.

Next, they remove the paint by sanding the animals down to their natural wood. Re-carving occurs if a piece is missing.

"We pride ourselves in saving every bit of possible original wood, where most companies will replace them because it's easier," said Stanczyk, a retired senior engineering technician at Moog.

The animals are then reassembled using epoxies and sanded again. The process for each animal takes about two weeks, and then they are ready to be painted, he said. 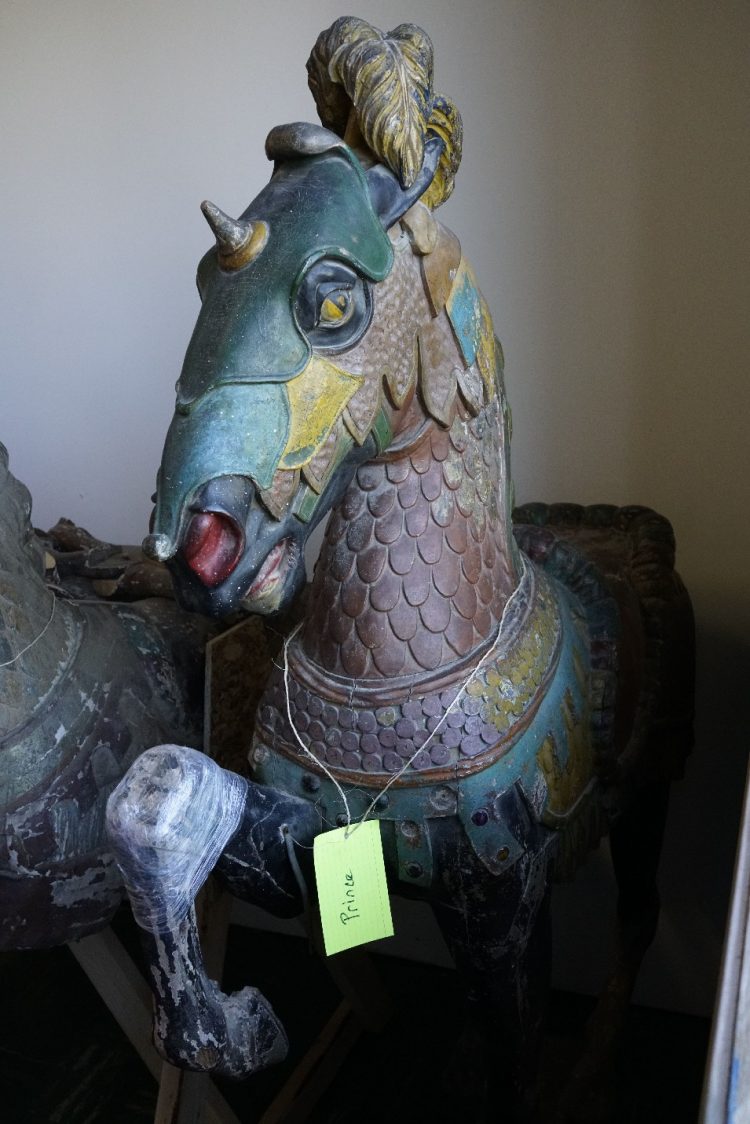 The original paint on the horses will be stripped and restored. Click on the image to view more photos. (Derek Gee/Buffalo News)

Six coats of primer and paint – three coats of alcohol-based bin, two coats of oil-based primer and one coat of Dover White paint – are applied to protect and seal the wood before the decorative paint can go on.

A color card used by Spillman Engineering in 1924 allows each figure to be painted in its original colors.

Worksheets are filled out to carefully document the work done on each animal.

Several women were busy on Thursday sanding two horses that had received a coat of prime in the paint area. Linda Chaffee was sanding the horse's tongue, while Helen Ronan, Christine Kasprzak and Kathy Kwiatkowski sanded the body and looked for rough patches.

"This is going to be part of Buffalo for a long time," said Michelle Schmitz, also of the Buffalo Snowbirds Decorative Painters. "There is going to be so many people who enjoy this for generations, so it's really exciting to be a part of that. And we all love to paint, so it's an awesome opportunity for all of us."

In the woodcarving area, a decorative horse that will eventually resume its place on the carousel's outside row was disassembled.

Jim Ronan, a volunteer, used a chisel to repair a damaged hoof.

"Bringing back something like this is fantastic," Ronan said.

"After they've stripped it, there's always so much debris," Marasco said. 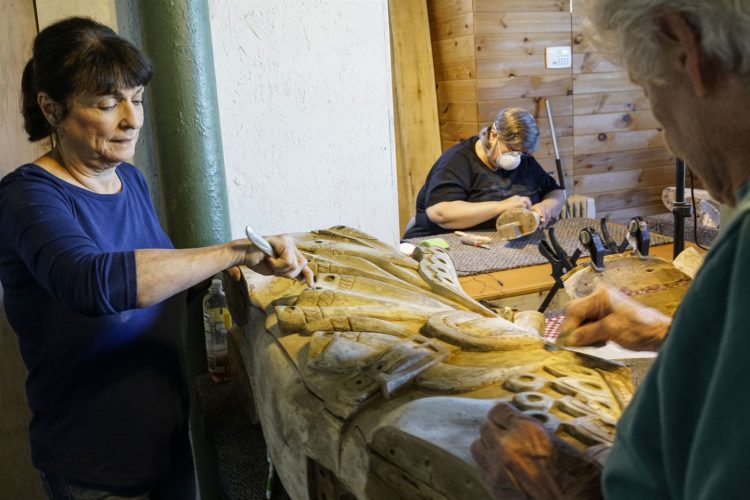 Volunteers from the Buffalo Snowbirds Decorative Painters sand down coats of primer. Click on the photo to view more images of the work on the carousel.
(Derek Gee/Buffalo News)

The menagerie has 26 original horses. Nearby, the lion and tiger, with their weight massed on top, were stored upside down to relieve pressure on their legs prior to being hand-stripped. A deer, in need of a missing rack to mount on its head, stood near them, while a giraffe leaned against the wall.

"How many places have a giraffe?" asked Stanczyk in wonderment. "He'll get his spots back, too."

A vintage sea dragon will also be taking the place of the handsomely carved lead horse, which will be put on permanent display.

"This is so wonderful," said Laurie Hauer-LaDuca, Buffalo Heritage Carousel's president and the person who located the 1924 carousel. "It couldn't be a better process to be a part of."

Seeing them back in North Tonawanda was a dream come true, she said.

"The level of detail in these pieces is really quite extraordinary," Hauer-LaDuca said. "Having looked at figures for over 30 years, the amount of detail and three-dimensional carving on these pieces compared to what you would see on a portable machine or early park machine is incredible. I have never seen carvings like this."

The machine, with its three rows of horses, will be only the 10th park-style carousel in operation in the nation. The rare deluxe model was made by the Herschell-Spillman Co., a pre-eminent carousel maker, or its successor, Spillman Engineering.

"To have a complete carousel from 1924 that we have the opportunity to restore is just not going to happen again," Stanczyk said. "There just aren't that many around to do it."