PITTSBURGH – Once you get past the consternation over offside challenges and a multitude of deals percolating around the expansion Vegas Golden Knights, one of the chief chatter points at the Stanley Cup final is the Sabres' coach search.

New General Manager Jason Botterill wants a coach in place by the draft June 23 in Chicago, and TSN reported Wednesday that Botterill interviewed San Jose assistant and former Sabres defenseman/pugilist Bob Boughner on Tuesday. There will be other interviews but many observers feel it could be a two-horse race – and both horses are in this series.

One is Pittsburgh assistant and longtime NHL rat Rick Tocchet, with whom Botterill is obviously familiar from the GM's last seven years here. The other is Nashville aide and Hall of Fame defenseman Phil Housley, the Sabres' No. 1 pick as an 18-year-old way back in 1982.

Players on each side in the series have been asked multiple times the last four days about both coaches, by The News and several other outlets. Naturally, everyone is quick to throw plaudits toward their guy. There's no way, however, to know what Tocchet and Housley are thinking.

As a general rule, teams in the Cup final rarely make their assistant coaches available to the media. Neither Housley nor Tocchet has been available during this series, as the teams understand conversations would immediately turn to post-series coaching jobs.

“Any time your name gets thrown out there, it just shows that a lot of people have respect for the work you’ve done,” Housley said last month in an interview with the St. Paul Pioneer Press. “Everybody has goals in life, whether you’re a player or a coach. I have those inside of me and what I want to do, but right now I’m really enjoying coaching in Nashville."

Tocchet would almost certainly be interested in the Buffalo job and working with Botterill. Housley is also being pursued by the Florida Panthers, which could give him another option for his first NHL head coaching gig. Tocchet was 53-69-26 in two years as the head coach of Tampa Bay, replacing Barry Melrose 16 games into the 2008-09 season and getting fired in 2010 when there was an ownership change.

This will be Botterill's first landmark decision and he can't get it wrong. The patience of the fan base and the Pegula ownership has clearly thinned over six straight years of no playoff hockey. Just ask Dan Bylsma.

Housley would be a popular choice, with a former Sabres great leading the franchise as it heads to its 50th anniversary season in a couple of years.

"He's detailed. He runs good meetings and he has the attention of the players," Predators coach Peter Laviolette said Wednesday prior to Game Two. "I think his game, his background, the player that he was, the hockey sense that he has, the way that he's able to communicate to the players, is one of his biggest assets. He's a smart guy that does a very good job communicating that." 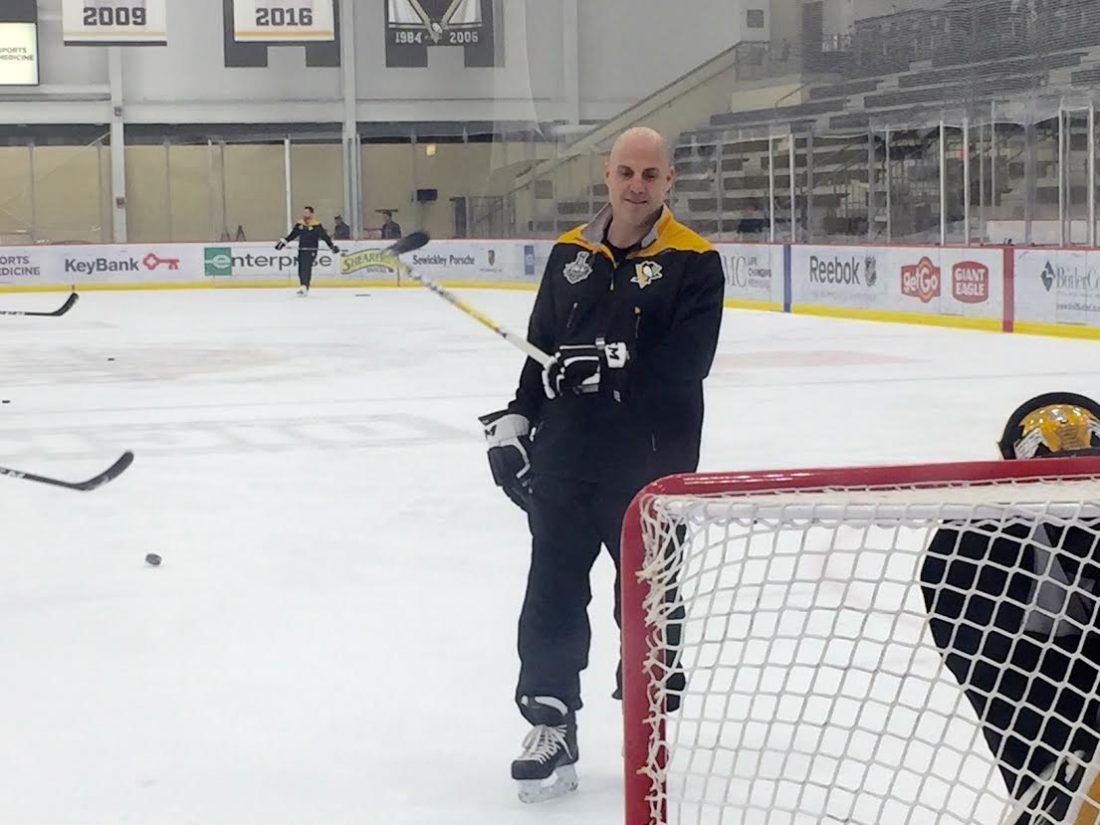 From this view, the hiring of Tocchet would not draw much enthusiasm.

Fans would not be all that enthused by the hiring of a longtime player for the hated Philadelphia Flyers. In addition, Tocchet might cross the line of Terry Pegula's "character" qualifications after pleading guilty to conspiracy and promoting gambling in 2007 for his role in a New Jersey ring. He was sentenced to two years probation in exchange for the plea. And Botterill runs the risk of continuing the over-Pittsburghing of the Sabres that started with Ted Black, Ken Sawyer and Craig Patrick, and continued with Dan Bylsma and now his own hiring.

Tocchet is very tight with Penguins winger Phil Kessel, who had plenty of good things to say when asked on Media Day.

"He is my favorite assistant coach of all time I've ever played for," said Kessel. "He understands what it's like to play the game, to be a player. He just gets it. He's been there, played a long time. Coached as a head man and an assistant. He makes it fun. He'd make that transition easily. If he gets that opportunity there, it would be unbelievable for him. I don't want to see him go, right? Because he's a great guy and a great coach."

Housley directed the 2013 United States team to a gold medal in the World Junior Championships and who did he choose as his captain? Wisconsin defenseman and current Sabres stalwart Jake McCabe.

“I’ve got to give a lot of credit to Phil Housley,” McCabe said in December when USA Hockey was holding its World Junior camp in HarborCenter. “He saw a lot in me, enough to name me captain of the team. It caught me by surprise and really opened my eyes to the type of player I could be.”

The Predators' stars were not born when Housley started his NHL career with the Sabres in 1982, and were still young when he finished with Chicago and Toronto in 2003.

"I didn't see many games with him when I was little in Switzerland but I had definitely heard of him," said Roman Josi. "So I looked him up. He's got some pretty good stats and had some good moves."

In addition to his World Junior role, Housley served as an assistant at the World Cup of Hockey last fall and American coach John Tortorella was known to be impressed with Housley's work, particularly as he ran the club's power-play practices.

"That really helped me,” Housley said. “You work with other people there and see how they coach and how they address the players, and I’ve tried to just consume all of that knowledge and use it. It’s been a great experience, and I think it can help moving forward.”

"He's one of the best defensemen ever to play. He commands your respect right away," said Nashville blueliner P.K. Subban. "When you have a guy like back to come to the bench to, you want to soak in everything. I just want to be a sponge to take in everything he says and does."

"You watch him practice, and he's still got a little bit," said a smiling Subban. "You can still learn something from how he plays. He's really smart and the information he gives to us as to how to manage our game is great. 'Howie' is really really smart about knowing when to say something and when not to. Howie has a wealth of experierence and knowledge and knows how to use it. That's what makes him such a great coach."

Phil Housley is officially a member of the Hockey Hall of Fame. #HHOF2015https://t.co/yDWB9z8l54

The Predators hired Housley after the 2012-13 season to help groom their young defensemen and he's made particular impact with Ryan Ellis and Mattias Ekholm, helping Nashville's top four emerge as perhaps the best in the NHL. Imagine what he might do for Rasmus Ristolainen.

"He's been terrific," Ellis said of Housley. "Since day one he's come here. He gets the game. He's an elite player. Whenever you have a Hall of Famer telling you what he thinks you should do, it's pretty easy to listen to him. He sees the game like how our D want to play the game and what we're trying to do. It's great to have someone who gets the game like you do."

"Today's game is a lot different than when I played 14 years ago," Housley told NHL.com earlier in the playoffs. "In saying that, each player has his own individual characteristics. They're very mobile and we encourage them to be part of the attack as much as possible. That hasn't changed, and I think that's what separates our guys because they are mobile, they can get up in the rush, their offensive instincts and reads have really gone in a great direction as far as their development."