Reusing Buffalo's abandoned grain silos is something talked about but rarely done.

Now, the most challenging project so far has been completed: Buffalo RiverWorks this past weekend opened a $2.2 million brewery in silos that were once part of the Wheeler-GLF grain elevator.

"We were able to salvage these silos to create what we think is the first brewery built inside a silo in the world," said William Casale, general manager for the Pearl Street Family of Companies, which includes Pearl Street Grill & Brewery and the Pan-American Grill & Brewery.

"I think the uniqueness of it is going to be worth it in the long run," Casale said.

"The grain elevators more than anything else in Buffalo are our defining image on the world architectural stage," Fisher said.

"We have the largest extant collection of them in the world," said Fisher, who did her graduate thesis at the University of Washington on the reuse of grain elevators. "The brewery is perfect, because it's that marriage of grain and the Great Lakes beer comeback happening in New York State with the push to have more local beer production."

Abstract Architecture, Kromac Design and RiverWorks employees overcame the engineering challenges. They used four of the six silos that sport vinyl Labatt brewing logos. The biggest challenge was cutting through rebar-reenforced concrete to open up space. A second floor was added inside the silos, and all of the work had to be done without the benefit of utilities, mechanicals or plumbing. 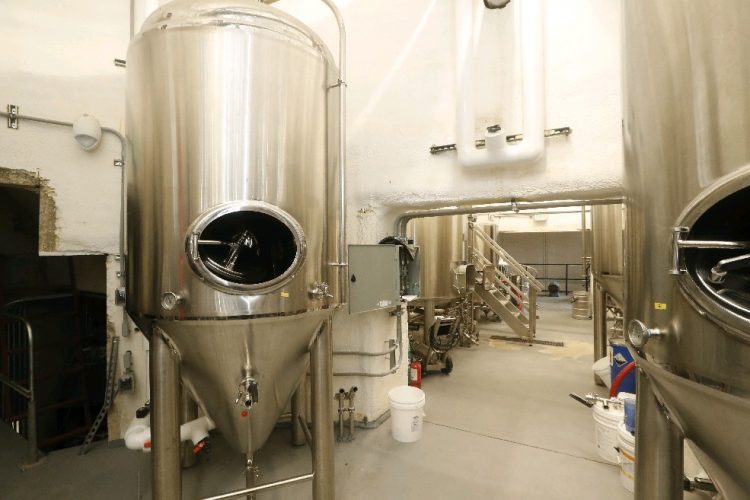 Cutting through rebar-reenforced concrete to open up space and fitting in large tanks were among the challenges to opening a brewery inside silos at Buffalo RiverWorks. (John Hickey/Buffalo News)

The brewery, which will serve eight craft beers, is the latest addition to a complex that in its first full year of operation in 2016 drew around one million people, Casale said.

The grain will come in at ground level, then augured up to a second-floor space to be cracked in a mill. It is then moved into the brewhouse in a second silo, where it goes into a grist case and mixed with hot water in a mash tun. After the liquid is drained, it is pumped into a kettle where it will be boiled and mixed with hops.

The hot liquid batch is then chilled in heat exchangers and pumped into one of eight fermentation tanks in the first silo. 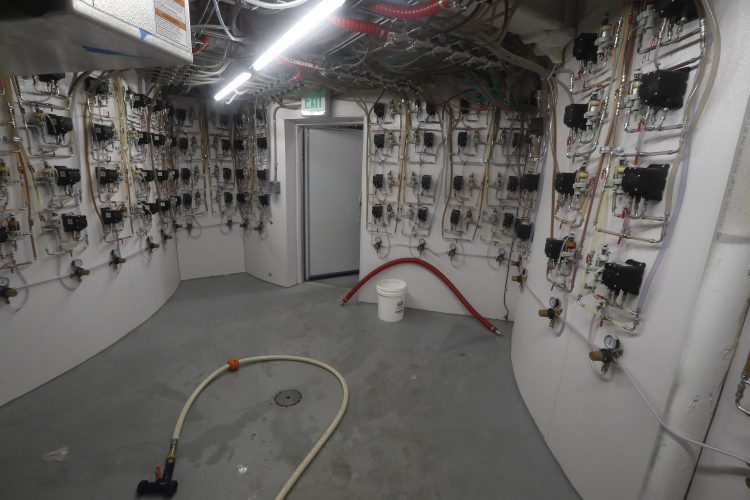 This is the pump room for RiverWorks' new brewery. (John Hickey/Buffalo News)

Ironically, a grain silo had to be installed to store the base malt used in all the beers.

Creating a distillery in the silos is also being considered, Casale said.

Outside in the beer garden, the remains of silos demolished in 2011 over preservationists' objections are now seating areas bathed at night in colored LED lights. The surroundings include a water feature and two gas-fired pits. 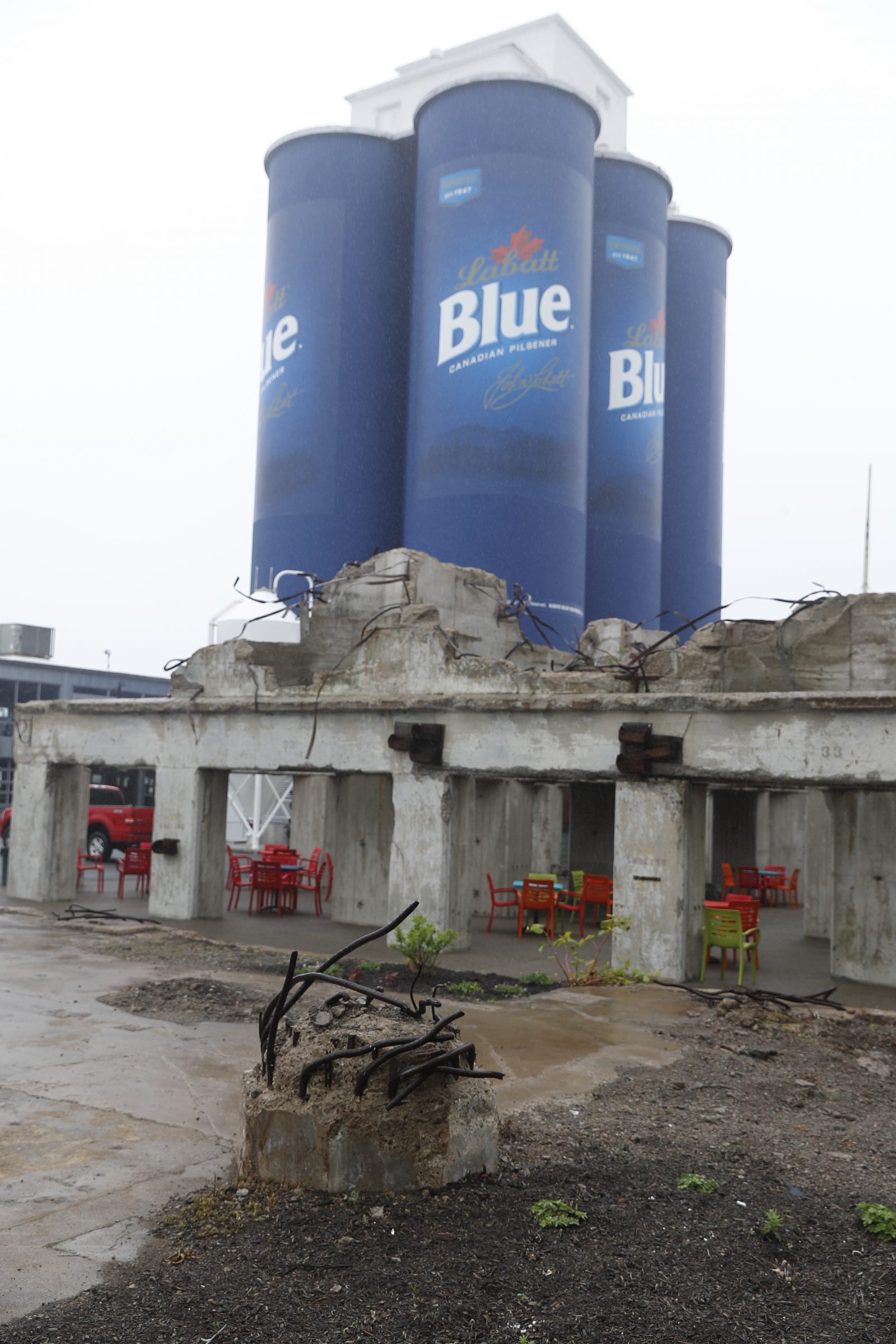 Nearby is "Medusa's Front Porch" – with shards of steel left to stick out of concrete columns.

Later this week, hanging flower baskets will adorn the seating area, along with vines in cedar planter baskets and in old buckets from grain elevators.

New activities are planned for this summer at RiverWorks.

Indoor rock climbing began in other silos this weekend. The progressively harder climbs are at heights of 35, 40 and 50 feet. Rock climbing will be extended outside later this summer. 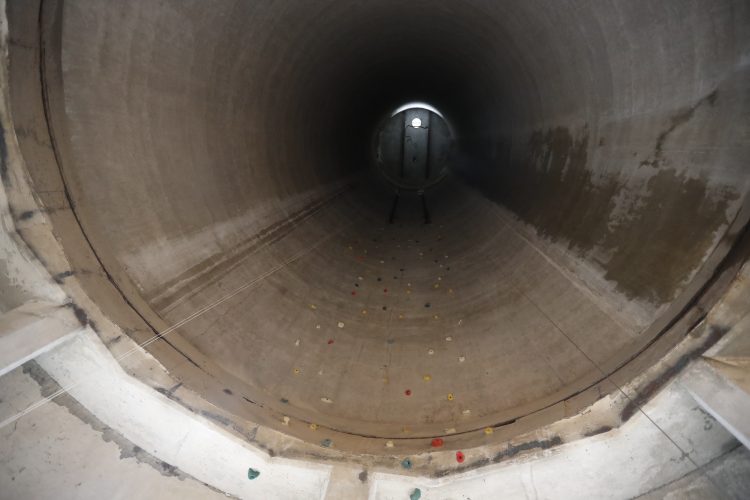 A climbing wall inside a silo. (John Hickey/Buffalo News)

The top of the silo will also have an observation deck.

Other projects are also under consideration. They include adding museum-like text panels to the silos to enhance brewery tours that will be held, improving the entrance's appearance and installing new signage at 333 Ganson St., and constructing a small amphitheater in a former rail barn.

"It never stops. It's one thing after another," Casale said.

"We're an entertainment-adventure complex first," he said. "The bar and restaurant are an enhancement to what we do, but the numbers are off the charts. We've had a great first full year, and we're hoping to double that over the next two years."