More than nine months after Rio, the pain is still there. When Jenn Suhr was reminded of her brief, anguished moments in the interview area after the women's pole vault final, it all came rushing back to the surface.

"I try not to think about it," Suhr said by phone last Friday, her voice rising. "It's still ... man, it's still hard to talk about it. That was devastating."

Suhr was sobbing, as she had last August after competing with a nasty respiratory ailment and struggling to a seventh-place finish in Brazil. Her hopes for a repeat gold medal having vanished, she broke down in the "mixed zone" that day when she talked about  letting down the folks back in Buffalo.

"But you've got to pick yourself up and keep going," Suhr said.

Picking herself back up is what Suhr does best. Whether it's the myriad injuries endemic to pole vaulting, or battling celiac disease, or fighting back the advance of a younger generation of female vaulters, the Fredonia native has always managed to persevere and remain at the apex of her sport.

Suhr entered the 2017 season with a new-found determination, borne of the knowledge that she still had the power and speed that had made her a 17-time national champion and a two-time Olympic medalist.

In January, she posted the world's top indoor jump this year, going 4.81 meters (15 feet, 6 inches) at the Doug Raymond Invitational in Ohio. In April, she cleared 4.83 meters to win an event in Austin, Texas,  the best vault in the world by a woman this year outdoors.

Suhr, who turned 35 in February, will compete next weekend at the Adidas Boost Boston Games, which will be conducted on the Boston Common in the center of the city. She's looking ahead to the U.S. outdoor nationals in late June, then the World Championships this August.

Fighting through illness to compete, Suhr comes up short

"It's hard to believe at 35 she's in the world lead," said Rick Suhr, her husband and coach. "Most people's careers are done about 30. People are retiring left and right. The gold medalist in the decathlon (Ashton Eaton) retired. I'm like, 'Gee, he's a lot younger than her.'"

Eaton is 29. Suhr, who didn't take up the pole vault until 22, keeps plugging along. It's not without its pitfalls. Early this year, she had to pull out of the Boston Grand Prix indoors with muscle tightness. She withdrew from the U.S. indoor nationals to protest unsafe conditions in the pole vault. Rick said he could come up with 40 reasons for their decision. 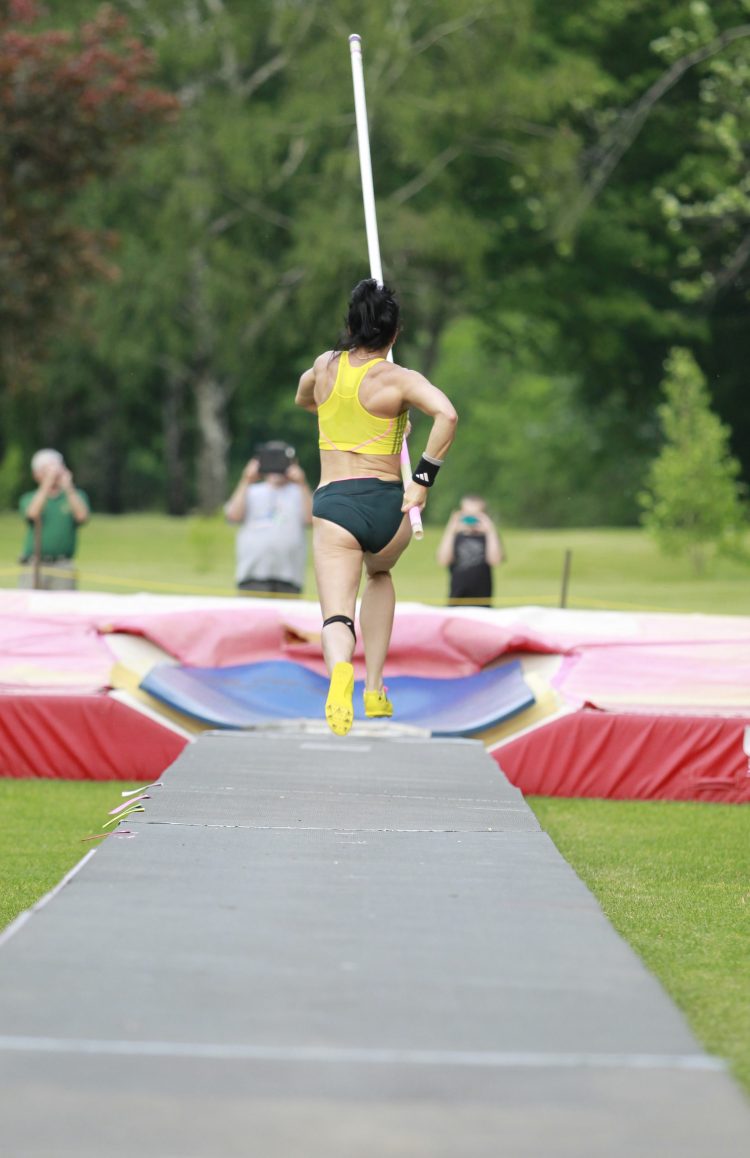 She admits there are times she wonders why she's still doing it. The politics can be tough, not to mention putting her body through those punishing workouts at an age when many women have already settled down to start their families.

"I have to not think about age," Jenn said. "Because if you do -- holy cow, my mom had three kids and one of them was 17 when she was my age? If you start thinking about age and you put a number on it, it's like 'Wow, maybe I shouldn't be doing this'.

"But then you think about your pole, the speed you're coming through, the weight you're lifting instead of putting a number on it. That helps. Any time I think I shouldn't be doing this anymore, I go in the weight room and realize, 'Wow, I can't believe I just benched more than I ever have.'"

Look at Tom Brady, still an elite quarterback and coming off another Super Bowl win as he closes in on 40. Athletes can remain strong and competitive at greater ages these days. Suhr said it helps that Rick doesn't have rigid training methods, that he modifies it from year to year.

"So every year, things are changing and we keep evolving," she said. "This year, we switched to Altius poles, which are lighter. They're a more reactive pole and it's working out well for me. The lightness has changed my run, so I'm running better and in more control. My feet are faster."

One big change for the Suhrs is not attaching too much significance to a single event. They felt they put too much stock in the Rio Olympics. Jenn was ready, as she had in London, but they found that circumstances – in this case, a mysterious illness – can scuttle your plans.

"Anything can happen on one day," Rick said. "To consistently be top three in the world, year after year after year, going on 12-13 years now, that to me is more impressive than anything. People say (Yelena) Isinbayeva is the best. But she didn't even stay in there like Jenn did.

"Isinbayeva never jumped over 4.90 after age 30," he said. "No one else has jumped 4.90, which is basically 16 feet, at 30. Jenn is 35, and I think she's done it more times after the age of 30. So to me, it's more impressive. It shows the consistency and ability to be there every year. Just being able to deal with the mental part of the game is difficult."

Suhr knows what it's like to fall violently ill a few days before competing in the Olympics, to wake up coughing blood on the morning of the final, to vomit in the warmup pit and have her muscles seize up before a jump.

After that, no obstacle seems insurmountable, including the toughest bar of all – age. A year ago, during a pre-Olympic press gathering at her Churchville training site, Jenn needled her husband for suggesting she was in the twilight of her career.

Rick says Jenn isn't going to be at it forever. But he said he has seen no decline in her speed or power. She has the best jump in the world, right? It would be nice to win her first outdoor world championship this summer. It's in London, where she won her gold medal in 2012.

"Well, after winning the Olympics, nothing could mean that much," she said. "It's a big meet for your shoe company and financially, but after the Olympics it's hard to put another meet up at that level."

She has 17 national titles, the most of any active track and field athlete. But it's world titles that get the most acclaim. That's why Isinbayeva, the Russian who won two Olympics (she beat Suhr at the 2008 Games) and still holds the world record, is generally considered the best female vaulter.

"I don't think people are ever gonna appreciate how good Jenn actually was," Rick said, "because it's a sport dominated by one-hit wonders and drug abusers. Jenn just toes the line and is good all the time and consistent. She's the Rodney Dangerfield of track and field."