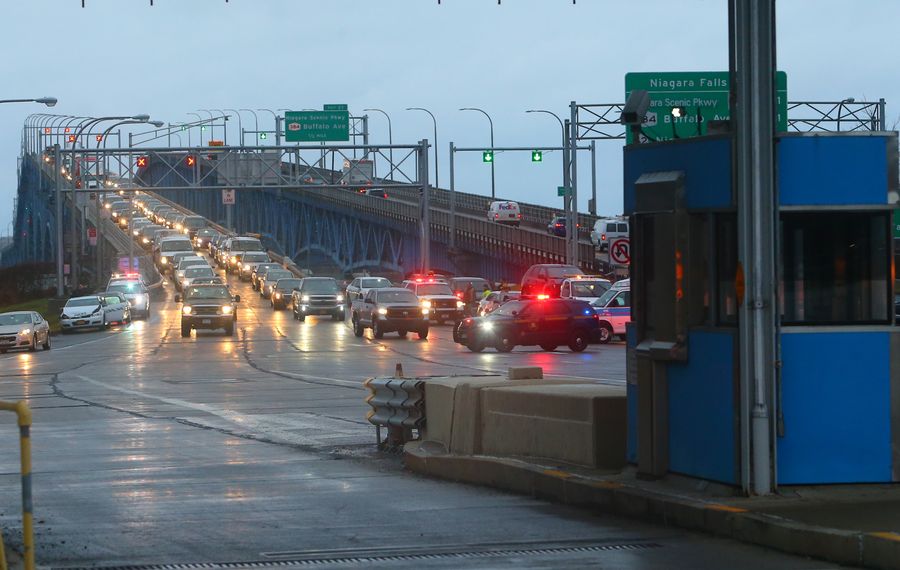 Grand Island bridge tolls are not just taking money from pocketbooks and time spent idling in traffic but could also be taking a toll on people's health.

The group WNY for Grand Island Toll Barrier Removal took a new tack on Thursday – with an educational summit to talk about how idling traffic at toll barriers affects toxicity in the air.

The group is pushing for an end to toll booths or a cashless system to stop traffic from backing up.

And, for some, it really does matter which way the wind blows.

Davis noted that winds off of Lake Ontario are funneled southwest along the Niagara River, between the state and the Canadian border, before they hit the Buffalo Harbor.

"All of that pollution from when traffic backs up over the bridge really affects the city," Davis said. 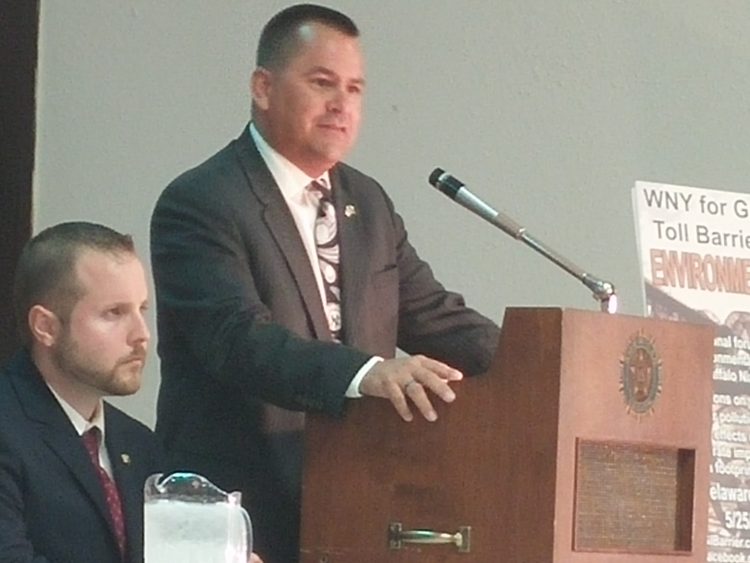 "All of that pollution from when traffic backs up over the bridge really affects the city," said City of Tonawanda Mayor Rick Davis. At left is Brian Michel, co-chairman of WNY for Grand Island Toll Barrier Removal, who attended a meeting Thursday evening to discuss the effects of traffic at the Grand Island Bridge.  (Nancy Fischer/Buffalo News)

He said in 2006 he worked with Jackie James Creedon of the Citizen Science Community Resources and the Clean Air Coalition to set up an EPA air-monitoring station in that area, which has been measuring levels of benzene.

Creedon, who helped lead the successful lawsuit against Tonawanda Coke, in which the company was convicted of 11 counts of violating the Clean Air Act, said she has supported efforts to remove toll booths from the Grand Island bridge for nearly 10 years.

Davis said the monitoring was put in place to detect plant exhaust from Tonawanda Coke, but some believe it also could be picking up benzene from the Thruway whenever that backs up.

He said their monitoring efforts since 2007 have resulted in lowering benzene 70 percent. But, he added, "It's still not enough."

"There's no reason in this day and age why we can't have cashless tolls here to prevent (benzene) and the smell. Anybody who has gone over the Grand Island Bridge will notice the stench," he said.

Dale Jerge, a panelist at the event from Industrial Hygiene and Occupational Health, said is was difficult to determine the risks that could be attributed just to vehicles on the bridge, but he said from an engineering control standpoint, if they could eliminate the risk it would be one positive step.

According to an air quality review that was released by the New York State Department of Environmental Conservation, the air-monitoring station at the bridge found elevated levels of cancer-causing chemicals like benzene, as well as formaldehyde and acetaldehyde, which can be found in tailpipe emissions.

Brian Michel, co-chairman of WNY for the Grand Island Toll Barrier Removal, pointed to the report and statistics that found the elevated level of toxins detected in the air. He said the study noted benzene levels at the monitoring site on Grand Island were 31 percent higher than the average recorded across the rest of the state.

"We came here for solidarity to removing the tolls, but we are kind of shocked that there are only about half a dozen people here," said Frank Pusateri, a Grand Island resident, who attended the meeting with his wife, Monica.

Pusateri said he has felt the immediate health effects, and that if he had the choice to do it over he would not have chosen to live on Grand Island.

"I'm not against paying tolls, but in this day and age they should be removed," said Pusateri, who said he favors a cashless tolling system.

"I don't know what degree our health is impacted, but it seems to me there should be a more efficient system these days than just sticking your arm out the window and paying a dollar," said Pratt.

Grand Island Town Supervisor Nathan McMurray said they often talk about economic impacts of the tolls, but he said there is also a health impact from the stop-and-go traffic to the antiquated way tolls are collected.

McMurray has noted that several bridges downstate have received cashless tolling systems, but there is no date and no word when that might come to Grand Island.

Jennifer Givner, a spokeswoman for the New York Thruway Authority, also did not give a date and said that they were "continuing to examine" the whole system of electronic tolls.

Givner had no comment on health concerns, saying it was a DEC matter.