For centuries, the wild beauty and strategic location of the Niagara County shore of Lake Ontario has drawn vacationers, residents, anglers and armies.

But every once in a while, proximity to the mighty lake becomes a hazard.

That was the case this spring, when high water levels and wind-blown rainstorms washed away land and trees, swamped docks and pushed debris up onto beaches along the southern edge of the lake.

There has been one significant loss. In Newfane, the beach at Krull Park will remain closed for the season because the approaches to the beach collapsed under the relentless wind-driven water. The boat launch at Golden Hill State Park and the southern one at Fort Niagara State Park have been closed to all but small crafts such as kayaks.

But many of the resilient occupants of the shore have worked to isolate the impact of the damage, and businesses are ready for a busy Memorial Day weekend.

Unfortunately, the announcement that the Krull Park beach is closed has led people to think that the rest of the town was affected too, said Gina Guido-Redden, a member of the all-volunteer Newfane Tourism Advisory Board.

"Many in the region have called to express concern and offer help," she said in an email. "We regret that the beach will remain closed for the season, but are happy to announce that all of our other attractions are opening on schedule." 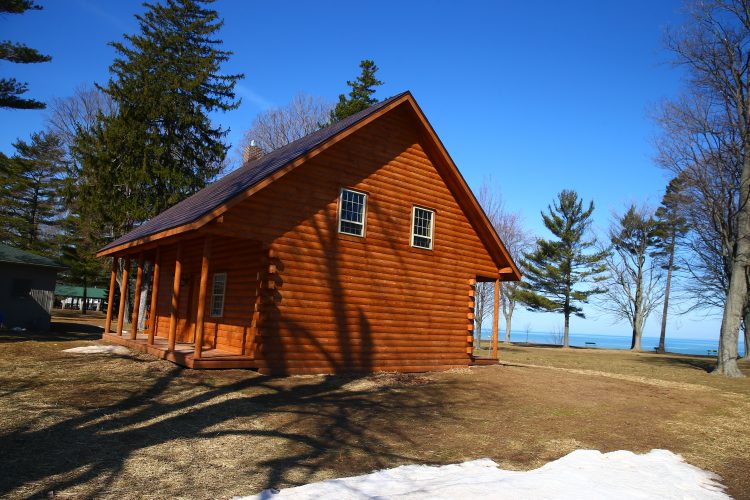 Despite shoreline damage that has closed the Krull Park beach for the season, Ye Olde Log Cabin in the park is one of the many Olcott attractions that will be open for visitors. The reconstruction of a pioneer cabin will have its grand opening June 10. (John Hickey/Buffalo News)

That includes other amenities at Krull Park, including the splash pad and Ye Olde Log Cabin, said Guido-Redden. Other lakefront attractions that are unaffected include the Olcott Beach Carousel Park, Lake View Village Shoppes, the Town of Newfane Marina, Fisherman’s Park and the Burt Dam.

Across the rest of the shore, damage ranges from some lost trees at Old Fort Niagara to debris in the marina and restricted boat launching at Golden Hill State Park. But as most people assessed and repaired damage, they expressed concern about similar events in the future.

Some residents and business owners have blamed the International Joint Commission's water-level management policy for contributing to the high water, but the commission says it was caused by the prolonged rainfall. In its mid-May report, the commission said that after "one of the wettest months of April on record, the first week of May 2017 was the wettest recorded since 1900 in terms of total inflows to Lake Ontario from Lake Erie and from widespread, heavy rainfall on the lake and across the Ontario drainage basin."

On May 14, Lake Ontario’s level hit 248.8 feet, "which is above the highest water level since the U.S. and Canada began keeping coordinated records in 1918," said Frank Bevacqua, public information officer with the International Joint Commission. He said the previous record was 248.75 feet in June 1952.

Three days later, on May 17, Lake Ontario was at 248.9 feet, which is 33.1 inches above its long-term average level for this time of year.

The International Lake Ontario-St. Lawrence River Board of the IJC said that if drier conditions continued, the lake's water level was expected "to peak and begin to gradually decline. However, owing to the huge surface area and large volume of water on Lake Ontario, it will take several weeks to significantly reduce levels, and longer to return to more average water level conditions."  The Board advises continued caution and preparedness for sustained high water levels in the weeks to come.

At Old Fort Niagara in Youngstown, Executive Director Robert Emerson said the property has experienced the second collapse of part of the lake bank since 2015, which he blamed on high water. 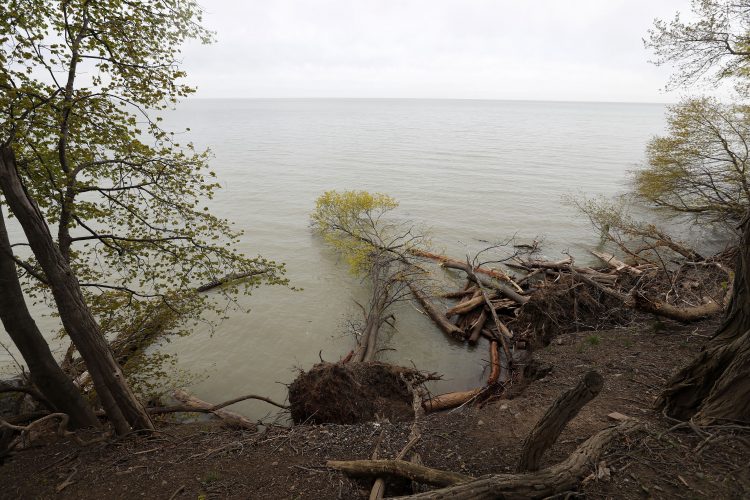 Old Fort Niagara staff documented a loss of trees and soil at the edge of Lake Ontario in early May. But the fort's executive director said most visitors will not even notice the damage. (Mark Mulville/Buffalo News)

In early May, the staff inspected the property and found that "a large section of the bank east of the fort, including big trees, has washed into the lake," Emerson said.

Although some visitors came to the Fort to see the damage, Emerson said it was difficult to see from the Fort's grounds and would not normally be visible to visitors. "There are some trees missing outside the fort, in an area that visitors don't normally go to," he said. "You can't even see it from any public area of the fort. There is absolutely no impact on site accessibility or safety."

The French Castle, built in 1726, stands about 15 feet away from the lake but behind a sturdy two-level stone sea wall that dates back to the 1840s, Emerson said.

So far, the lake water has only come up to the first level of the wall, Emerson said. As the water level stabilized, he said, "Our bigger concern is the long-term integrity of this sea wall. We have reached out to the Army Corps of Engineers, and we're waiting for them to get back to us. They did a study a few years back when this was more of a theoretical problem."

Now, Emerson said, "We're looking to them for some long-term solution. No doubt whatever that solution is will involve some pretty serious funding, so that's going to be another challenge. We've done about as much as we can do at this point."

High water levels closed the southern launch at Fort Niagara State Park to boats, said Angela Berti, spokesperson for the State Office of Parks, Recreation and Historic Preservation. While car-top boats, such as kayaks, may launch there, she said, "All boaters should be prepared to launch in high water conditions."

At the U.S. Coast Guard Station, whose building is located at the base of Fort Niagara, close to the river, "We got a little water intrusion here" in early May, said Senior Chief Petty Officer Adam Pedzich. "Like everybody else, we are dealing with it."

The station, built in the 1880s, "is one of the older stations in the Great Lakes," he said. "Like a lot of people we are having some minor basement flooding issues in our boathouse, so we have some sandbags and some pumps."

The building contains offices and crew quarters, but the water flooded only the basement, which was used for storage, Pedzich said. "We've got sump pumps and some extra pumps down there, and it's dry down there now."

Pedzich stressed that the station's mission, to provide search and rescue services from the base of Niagara Falls to Thirty Mile Point in Somerset, has not been affected. "We're ready to respond, we have our boat ready to go. We do have a dock, so our boats aren't in the water right now, but we can trailer the boat and launch it wherever we need to."

Four Mile Creek State Park in Youngstown and Wilson-Tuscarora State Park in Wilson were both described as "open for business" by Berti, who said, "We are preparing for a busy Memorial Day weekend."

“New York State Parks is actively monitoring high water and shoreline erosion at its facilities on Lake Ontario," she said. "The agency will assess impacts as the water recedes.” 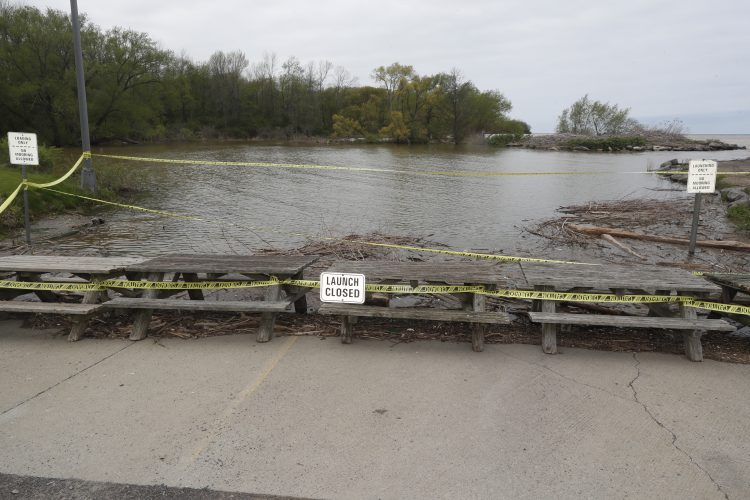 The boat launch at Golden Hill State Park, flooded and filled with debris, has been closed temporarily to all but small car-top craft, such as kayaks. (John Hickey/Buffalo News)

Golden Hill State Park in Somerset, a popular campground that contains the majestic Thirty Mile lighthouse, lost some ground near the lighthouse, said Renee Campbell, park manager. "That is being addressed pretty quickly, and it's not in dire straits," she said.

A trail used mostly by maintenance workers and some property adjacent to the mysterious abandoned Twin Locust Lodge ruins at the edge of the water was lost, she said.

The boat launch was not only swamped by high water, but the water and shoreline were filled with debris, including many large branches and tree trunks. Yellow caution tape warned visitors that they should not try to enter the area.