As pedestrians approach the University at Buffalo's soon-to-be-completed Jacobs School of Medicine and Biomedical Sciences from the west, a flash of color cuts through the construction dust swirling around the $375 million building.

Viewed through the windows of the newly renovated Allen-Medical Campus subway station on the ground floor of the new building, that small visible sliver of Shasti O'Leary Soudant's new sculpture "Gut Flora" is head-turning.

Inside the stark white space, where the sculpture's technicolor tentacles reach from floor to ceiling, it is jarring. In photographs that have circulated on social media, the serpentine sculpture appears so vibrant and otherworldly that some have mistaken those images for digital renderings.

On Monday morning, two days after the sculpture was completed, a steady flow of subway passengers gazed in wonderment at the sculpture while riding the escalator. Some of them paused before leaving the station to take it all in.

"I was worried about people looking at it and going, 'Oww, my eyes, my eyes!' " said O'Leary Soudant, who was commissioned to create the installation by a committee made up of Albright-Knox Art Gallery public art curator Aaron Ott, University at Buffalo Art Gallery Curator Rachel Adams and Buffalo artist and collector Gerald Mead, with input from the Niagara Frontier Transportation Authority.

"In its monumental aspect, it is overwhelming," O'Leary Soudant said. "It's definitely waving over you with color. But so far, all of the reaction I've gotten has been positive." 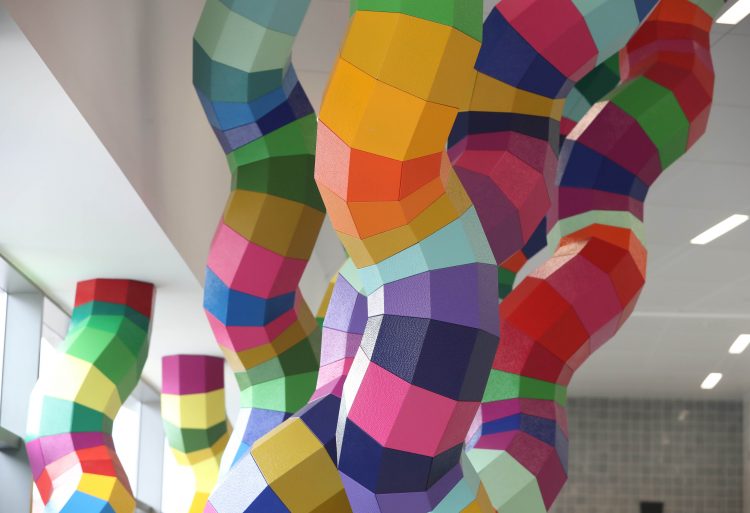 Desiree Ransom and Nyree James took a moment to look at the piece on their way to school Monday afternoon. Both said they were impressed by the way the sculpture's color stood out against the white surroundings of the new metro station. And it helped that the piece included heavy doses of their favorite colors, purple and pink.

"It's pretty cool to me. I just want to know how long it took to do it," said Ransom, a senior at Buffalo Academy of Science Charter School. "It's like a rainbow tree." 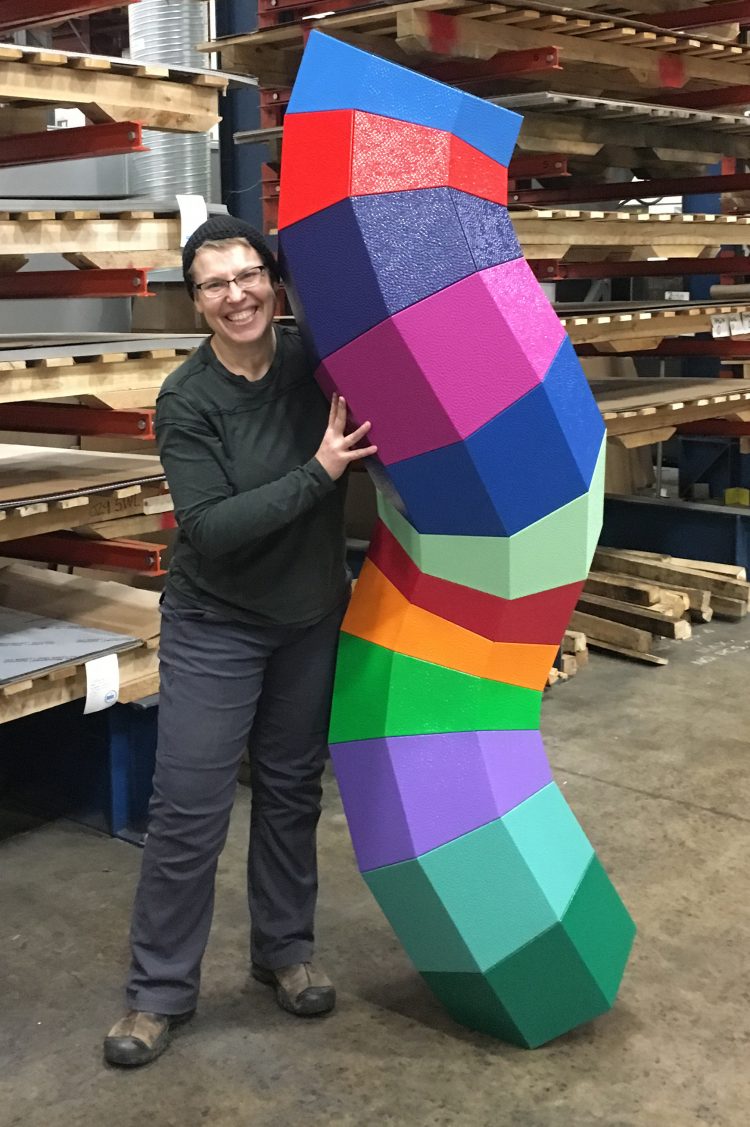 Buffalo artist Shasti O'Leary Soudant poses with a piece of her sculpture "Gut Flora." (Photo courtesy of the artist)

O'Leary Soudant, who also created a high-profile public art project at 500 Seneca Street and whose work is in the collection of the Albright-Knox Art Gallery, said that there are no wrong interpretations of the work.

But her intention for the piece, which is modeled on the bacteria that live inside human intestines, is specific to its location in a transportation hub that will serve the Buffalo Niagara Medical Campus.

"I started to think about Buffalo as a larger body, like a corporeal entity where the streets and the subway lines and the tunnels and the bridges – all of the thoroughfares – are part of the circulatory system of the City of Buffalo," she said.

It's no mistake that the snaking structures, she said, "bear a resemblance to the structure of DNA. These fundamental parts of our bodies, these fundamental expressions, are translated into the colors that we have here."

The 25 vibrant colors were achieved by powder-coating 242 individual pieces of stippled stainless steel, a material trademarked by the Buffalo company Rigidized Metals. The pieces, which weigh only about 200 pounds each owing to the lightweight material, are held together by 15,500 nuts, bolts and washers.

The pieces are fastened to the structural beams of the building and snake through perfectly cut holes in the station's ceiling and floor tiles, giving visitors the sense that the strands run through the entire building – and possibly through the earth below and infinitely up into space. 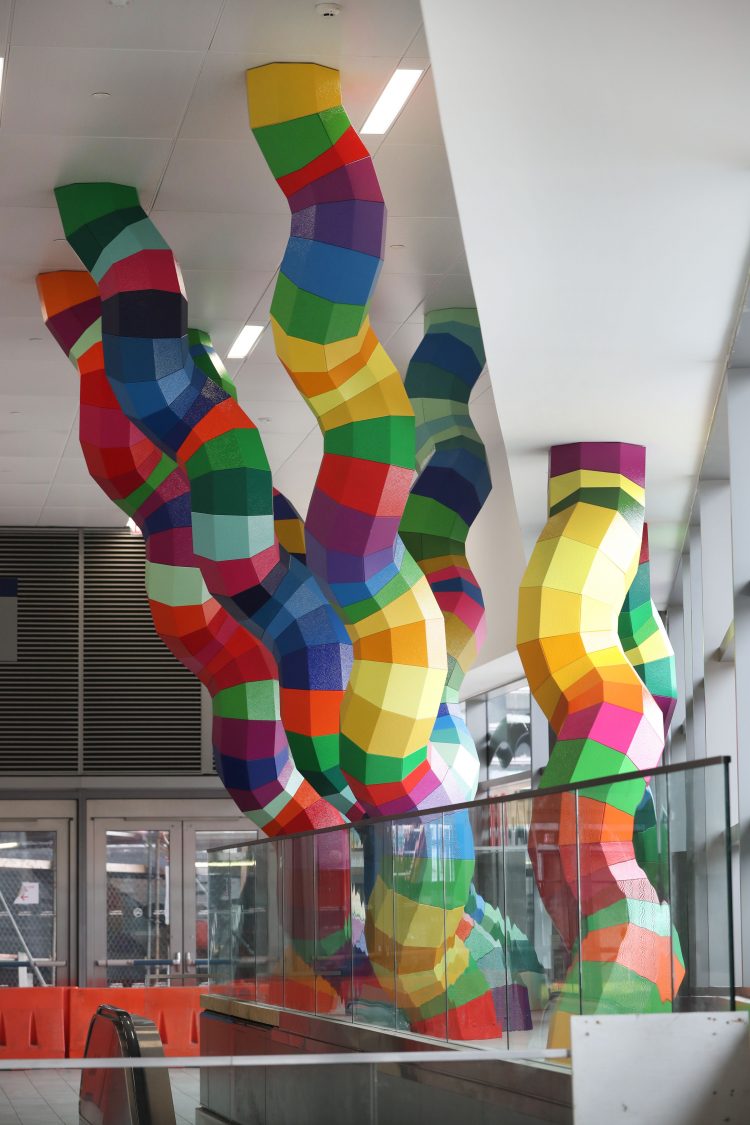 O'Leary Soudant, who worked with a large crew to install the piece over several sleepless nights, said that the best time to view it is in the early afternoon, when sunlight shines into the space and illuminates it like a light box. This has the effect of making the colors even more vibrant and bringing the point of the piece home.

"You can see that each of these strands, each of these threads of bacteria has a different expression. That is sort of to signal the idea that the diversity of that culture is a contributing factor to the health of the overall larger being," she said.

"It is a garden of beneficial bacteria. One of the reasons we grow gardens in the first place is so that we can see these colors."