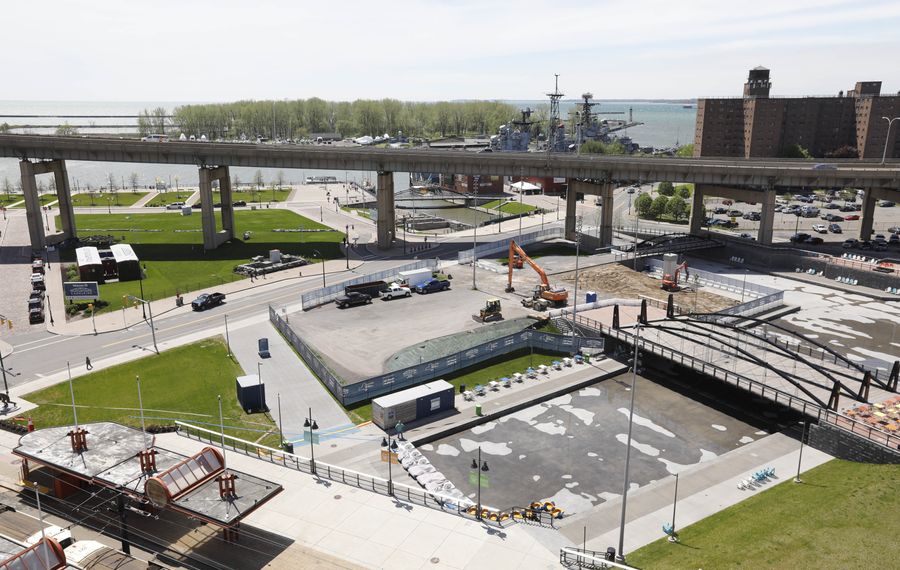 Don't get used to all that open space at Canalside.

After mostly incremental changes, bigger projects are planned to make Canalside into the vibrant, historically themed downtown waterfront envisioned a decade ago. That plan called for buildings with residences, restaurants, shops and bars along cobblestone streets.

"Ultimately, most of the green space that you see at Canalside is slated for development," said Sam Hoyt, an Erie Canal Harbor Development Corp. board member. "It has been the plan that we were going to have waterfront access with the boardwalk, the amenities at the water's edge and the green space nearest the water. The other parcels have always been designated as a development site, and to recreate the historical canal presence that once was there."

Those plans are expected to take a big step forward this year, starting in June.

The popular grassy area by the boardwalk will remain untouched. But the City of Buffalo will solicit proposals from developers for an area on both sides of the Skyway where concert crowds now gather.

The Erie Canal Harbor agency will solicit proposals to develop what is now a large hole in the ground north of the ice skating canal where Memorial Auditorium once stood.

Those are the two largest tracts of land to be developed. But first, the waterfront agency will ask developers in June to submit proposals to build one to three buildings near the canal and future children's museum, now under construction.

"There is a real sense now that this will be a neighborhood," said Tom Dee, president of Erie Canal Harbor Development Corp., the state agency overseeing the waterfront.

"We want streets activated with buildings, with retail at the ground level and office and residential above. We would love, love, love residential," Dee said.

"The ultimate goal is this creation of a great neighborhood, with plenty of green space. Imagine living in that zone," Dee said. "We have great districts throughout Buffalo, and now we'll have one right along the waterfront and accessible to everybody."

The time is coming for Canalside to become a place where people live, work and play, said Brendan Mehaffy, who heads the city's Office of Strategic Planning. It's not just a place to go for concerts, Zumba workouts and walks along the boardwalk.

He said the city plans to develop its parcels, bounded by Marine Drive and Main, Perry, Prime and Lloyd streets.

"We've been building toward this for a long time," Mehaffy said, citing the state's 2004 master plan. "The land is very attractive for development ... and in the near future, the city intends to identify partners for developing the land.”

There's even more ahead for Canalside.

Benderson Development expects to break ground in 2018 on a four- or five-story building across from The Buffalo News, between Washington and Main streets and near the East Canal fountain. The concept calls for apartments on the top floors, with offices on the second level and restaurants on the ground floor, along with underground parking.

Benderson constructed nearby One Canalside in 2014. That seven-story building is home to Courtyard by Marriott, Phillips Lytle law firm and a Pizza Plant.

The new development waited while a plan to move underground utilities was finalized.

"We have interested parties we are speaking to, and good things are going to happen," said Eric Recoon, Benderson's vice president of development and leasing. "It will certainly be something we would hope to be in the ground with by this time next year. The goal would be to open two years from now."

Explore & More Children's Museum and a vintage 1924 carousel are also coming to Canalside. Both plan to open in the second half of 2018.

Almost everything remains in the design and planning phase, so some changes could still occur, Dee said.

Other factors could affect what happens on the waterfront.

Pegula Sports and Entertainment is interested in building at Canalside. A consultant was hired to offer advice on real estate investments within the area.

"Pegula Sports and Entertainment is fully committed to the Canalside district and heavily interested in its growth," spokesman Don Heins said in a statement. "If an opportunity arises that would be in the best interest of our company and the community, PSE would be open to playing a greater role in further Canalside development."

Developers are eyeing the DL&W Terminal – located behind KeyBank Center – for a public market and other uses. The state has budgeted $20 million from the Buffalo Billion II program for the redevelopment of the terminal.

"Timing is everything when it comes to real estate development," Hoyt said. "With the advancements taking place with HarborCenter and the other movement down there, everybody believes the time is right to do the DL&W Terminal.

"We anticipate good news for the DL&W in the very near future," Hoyt said. "Gov. Andrew Cuomo put $20 million in his budget this year to help expedite the next phase. We're hopeful you will be hearing exciting news about a long-term commitment."

"I can tell you it's extremely real," added Robert Gioia, the agency's president.

Adding to the construction activity will be the reopening of a 1.2-mile portion of Main Street between Tupper and Scott streets to allow vehicles to share the Metro Rail track bed. Work could begin as early as 2018.

This year also marks the involvement of Be Our Guest, a subsidiary of Rich Products that will manage, maintain and program Canalside. And new signage is expected to come to Canalside and the surrounding area in early 2018.

History in the mix

HHL Architects – known for its work in historic preservation, including the Martin House Complex, Artspace Buffalo and the Market Arcade Building – is working on design plans for historic structures proposed in the 2004 master plan.

A historic Union Steamboat Co. facade for a relocated concert stage and ghosted pavilion are both being developed on the boardwalk, near the bowstring truss bridge. Recreation of the Union Block building, on the western side of the Commercial Slip, is also planned. Bathrooms, an information booth and police substation could wind up at either location, with construction bids expected in 2018.

"We are booming with work," Dee said. "It's always a mystery when people say there is not much going on."

Then and Now: Canalside

Rep. Brian Higgins has repeatedly criticized the waterfront agency for not accomplishing more.

“It is encouraging to see ECHDC finally moving to activate their 2013 Master Plan for Canalside," Higgins said in a statement to The Buffalo News.

"Notwithstanding the critics we have, there is great progress," Gioia said. "I think the record is very clear on the progress both on the Inner Harbor at Canalside and the Outer Harbor, all done with a robust team that's the equivalent of 6 1/2 people."

Homes in the area now branded as "Canalside" were cleared out in the 1960s as part of urban renewal.

A master plan, built on previoius plans, was developed for the downtown waterfront in 1999. It was met with public criticism and a lawsuit in federal court by preservationists led by Tim Tielman, now executive director of the Campaign for Greater Buffalo. That led to the Erie Canal Harbor Master Plan, a more history-based approach approved in 2004 after considerable public input.

The plan anticipated economic development at the same time it made access to the water and respect for the site's history a cornerstone, according to Peter Flynn. His firm, Flynn Battaglia Architects, was the lead consultant on the master plan, which earned a Waterfront Center "Excellence on the Waterfront" award.

"We settled on a two- and four-story development plan that would have buildings reflective of a dynamic urban-scaled development zone, with various mixed uses ranging from commercial and office to possibly some residential," Flynn said.

The public played a key role in the plan's adoption.

"Public sentiment helped to focus attention on the history of this site and has driven all design solutions presented in this master plan," the plan's conclusion stated. "This master plan provides clear direction on how this site should be interpreted and treated," it said.

Later plans extended the borders of Canalside to the former Memorial Auditorium site.

A project plan in 2010 and updated in 2013 gives more specificity to concepts laid out in the master plan. It envisions private investment in commercial, residential and entertainment establishments at Canalside.

The document also includes proposals that may or may not come to pass, including a public market and one-story underground parking ramp on the site where the Aud once stood and a boutique hotel where Clinton's Dish is located.

Dee said the waterfront agency isn't required to do everything in the plan.

"We're not bound by it, and if we don't think it's a good idea we won't do it," Dee said. "Timing is so important. As things change and evolve, we can adjust the plan as we go forward and get public input."

Hoyt said the agency is looking forward in June to moving forward on its plans and gauging developer interest.

"A village-like setting that has a lot of retail, restaurants, entertainment and residential, with architecture that reflects history but doesn't necessarily replicate it, is the way to go, and when we frame and write the request for proposals, that's what's going to be encouraged," he said.