The U.S.-Canadian agency that controls the flow of water out of Lake Ontario is increasing the flow in the face of record high water levels.

But the move comes too late for many property owners whose land has been damaged by erosion and flooding this spring.

Juanita Haight Erwin of Tonawanda, co-owner of Haight's Park, a farm and campground on Lower Lake Road in Somerset, said Friday that two cottages rented to visitors for decades can no longer be used because they aren't safe.

Some of the 25 trailer sites on the campground also have to be moved away from the bluff overlooking the lake, and that means they will no longer be in the shade.

About a dozen large trees near the bluff have fallen into the lake, taking large chunks of land with them, so there isn't as much shade as there used to be.

John Hart, who has lived at the farm for 49 years, said the question of whether the weather or the International Joint Commission's policies are most to blame for the damage is not relevant.

"When you're down here every day and see dirt falling in the water, it's too late," Hart said. "It's too late to blame someone. It's time to put a plan together, because this is everybody's property."

He said if the state allows lake shore repairs, as the Department of Environmental Conservation is touting under a new emergency permit program, they have to stick with the effort.

"They need a maintenance program," Hart said, as he watched waves crash into the shore Friday, beneath the exposed roots of trees that are in danger of being the next to fall into the lake. "It's not something you can put down and walk away from."

State property will be repaired as fast as possible. Like Haight's Park, Golden Hill State Park in Somerset has lost about 30 feet of land this spring, bringing the bluff near a split-rail fence surrounding the historic Thirty Mile Point lighthouse.

"The damage is about 40 feet from the lighthouse," park manager Renee Campbell said. "We are scheduled to get some new rip-rap."

Those repairs may come in the next week or so, but the state park already has lost a maintenance driveway to its boat launch, while 4 feet of water submerged an island near the park's marina.

However, a deep foundation in bedrock should protect the 60-foot lighthouse, built in 1875 and still in use.

"All the reports we get are, we should be OK," Campbell said.

Most of the 209-acre Haight farm, which includes about 1,500 feet of lake frontage, is rented to a dairy farmer, but the campground provides most of the money to pay expenses and taxes to keep the property in the family, as it has been since 1911.

"Those trailers used to sit well back from the lake, and now the erosion has brought the lake bluff right up to the trailers," said Rob Erwin, Juanita's husband. 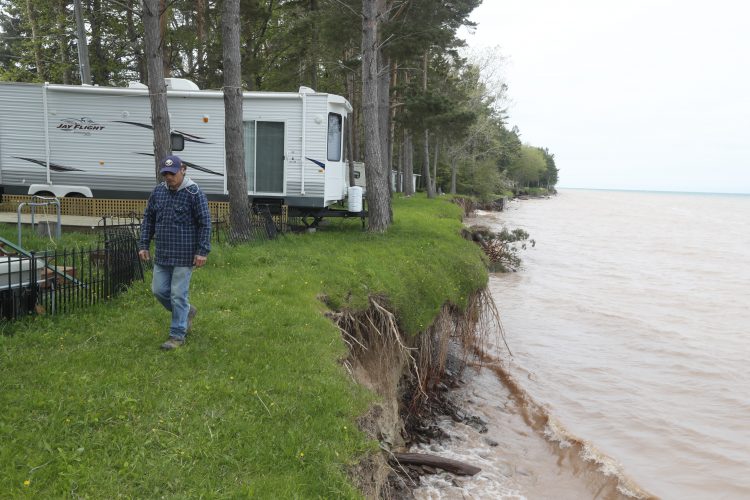 Haight's Park, a farm and campground at 9225 Lower Lake Road in Somerset, has suffered heavy erosion. Some of its trailers have to be moved and two of its cottages have become too unsafe to rent. Caretaker John Hart walks along the damaged shoreline on Friday May 19, 2017. (John Hickey/Buffalo News)

"And also to the very front of the north walls of the two cottages that sit on the bluff," added Juanita, whose grandfather originally bought the property and gave his name to Haight's Park.

"Those cottages are not going to be rentable unless and until we can move them away from the bluff," Juanita Erwin said. "Where we used to have a straight east-west bluff, there's a giant C-curve."

This is opening weekend for the campground.

The International Joint Commission, the binational Great Lakes agency, announced Thursday that the Lake Ontario outflow rate is being increased in response to the highest water levels ever recorded since reliable record-keeping began in 1918. The old record, which was broken Sunday, was set in June 1952.

The lake remains 33 inches above normal for this time of year.

The International Lake Ontario-St. Lawrence River Board, which has its hands on the spigot, has been trying to balance the complaints of New York State property owners against the flood threat in Montreal, where the water level was 55.5 inches above the seasonal average on Wednesday.

There has been flooding in some areas of western Montreal and on islands in the St. Lawrence River this spring. Part of the reason for the high water there is the strong flows from the Ottawa River, and those flows have now slackened, the IJC's statement said. 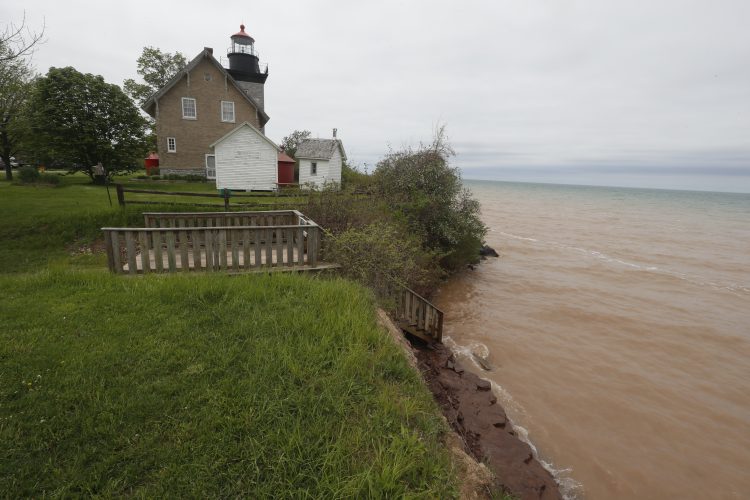 After one of the wettest Aprils on record in the Great Lakes region, the lake just kept rising, but the weather has become drier in the last several days, and with the adjustments being made in outflows past a dam in the St. Lawrence, the lake should start to fall slowly over the next several weeks, as outflow exceeds inflow from the Niagara River and the rains.

Whatever happens for the rest of the spring, the damage along the lake shore remains.

Krull Park Beach in Olcott will be closed all summer. Piers have been submerged at Olcott and Wilson. Erosion removed a major chunk of soil near the oldest building at Old Fort Niagara in Youngstown. Waterfront businesses and homes from Youngstown to Olcott have been flooded at times.

The four House members who represent portions of the Lake Ontario shore, including Rep. Chris Collins, R-Clarence, recommended Thursday that the state should ask for aid from the Federal Emergency Management Agency. That can be done if Gov. Andrew M. Cuomo asks President Trump to declare the lake shore a disaster area.

A Cuomo spokesman said there hasn't been enough damage to public property yet to qualify for a disaster declaration.

"The ones who have a home threatened, those are the ones my heart goes out to," Hart said. "How can we help them get back and recover? That's a good, positive thing to think about."

Homeowners anxiously watch as Lake Ontario eats up their property