Richard Fink was an All-High first baseman who weighed about 165 pounds when he played for the Bennett High School baseball team during the mid-1970s. He spent the 1980s and ’90s playing Muni and suburban hardball with teams based near his Getzville home, as well as pickup basketball up to three times a week.

Fink, 62, has worked the last three decades as a legal process server. Over the years, he spent a growing amount of time behind a desk or the wheel of a car. He ate lots of food on the go and enjoyed his share of the standard Buffalo diet: breakfast sandwiches, chicken wings and pizza.

The nearly 6-foot-tall Fink weighed 215 pounds when a case of pneumonia knocked him off his feet for two months early last year. He packed on another 15 pounds as he recovered.

Meanwhile, his blood sugar level crept into the diabetes range.

“I’ve played sports my whole life, so when you’re diagnosed with diabetes it’s a shock,” he said.

Fink was not at all comfortable joining the legion of 115 million Americans – roughly one in three – with diabetes or prediabetes. His primary care doctor put him on the oral medication Metformin and helped him understand the dangers unaddressed high blood sugar levels can bring: poor circulation that boosts the risk of blindness and kidney failure, heart attack, stroke and limb amputation.

“If scientists tell you that you can go blind looking at the sun during an eclipse, you don’t look. It’s an immediate reaction,” he said. “But if it comes down to eating or other choices, it’s OK, because nothing happens immediately to you. But then, 20 years later, that accumulation of poor eating habits and behavior, it catches up with you. The bill comes due.”

Fink decided to beat back diabetes. Here’s how.

Start with a plan 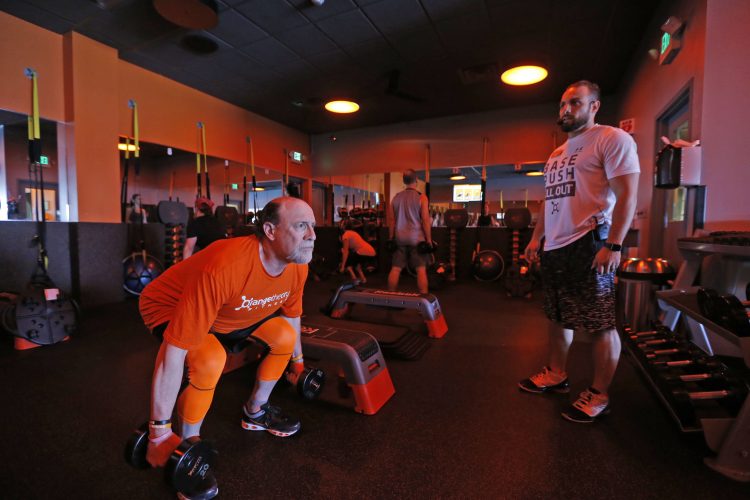 Richard Fink, left, pledged to amp up his weekly workout regimen and change his diet after he was diagnosed with diabetes. (Robert Kirkham/Buffalo News)

“The best thing someone can do when they get diagnosed with diabetes or prediabetes is to lose weight,” he said. “It’s the essential key to ridding yourself of diabetes.”

Fink had long been interested in the training regimens of top athletes, even though he didn’t always follow them himself, so he started from a place he understood: He needed to burn off more calories than he consumed.

Research shows that losing 15 percent of your body weight can lower the risk of Type 2 diabetes by more than 50 percent, according to the American Diabetes Association.

That kind of weight loss needed to start with a new mental approach, Fink reasoned. He started to make better, more educated health and fitness choices going forward – every day – and not get too discouraged if he slipped up occasionally. 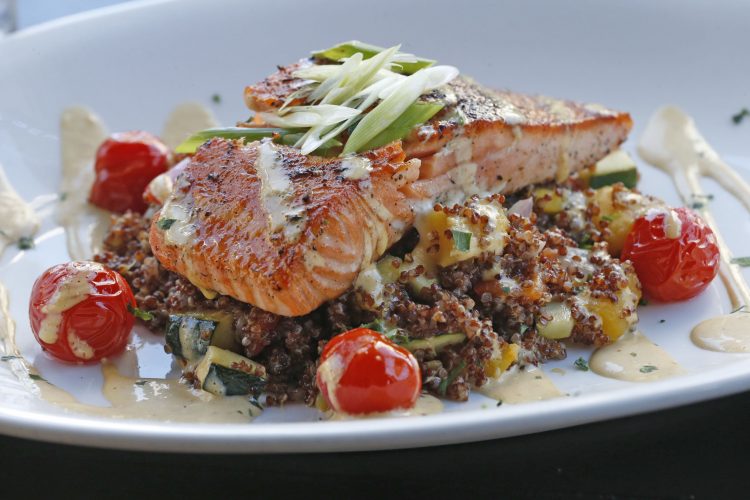 A Mediterranean diet including plenty of chicken and fish has been part of Richard Fink's nutrition plan. (Robert Kirkham/Buffalo News)

“Diet and exercise has to be part of any diabetic regime, no matter what,” said Dr. Howard Lippes, a Williamsville endocrinologist.

Fink was determined to add more exercise to his weekly regimen. For him, the remnants of his past made this the easier part. “The more important thing to remember is that you cannot out-train a bad diet,” he said.

He pretty much knew how to eat right, but the new numbers in his life underlined that he didn’t make the best choices often enough. He turned decidedly to a Mediterranean diet. He gave up cereal, white breads and other processed foods made with simple carbohydrates and added sugars. Simple carbs – as opposed to their more complex kin, found mostly in vegetables – raise blood sugar levels, which promote body inflammation that fuels many chronic diseases, including diabetes, the seventh leading cause of death in the U.S.

Fink fed his better habits with information gleaned from books, magazines and (shameful plug intended) WNY Refresh. He tends to eat eggs for breakfast, a light, chicken-based meal for lunch and dinners rich in chicken, fish, fruits and vegetables. He drinks plenty of water. He has never smoked – anything – and doesn’t drink alcohol, which in excess also promotes disease.

“Do I still love wings? Absolutely,” he said. “Do I still have them once in a while? Sure, but I have changed to a lot of healthy eating. You need to have chicken and fish and salads, and be careful on dressings and toppings. You’ve got to read labels, too. I never thought I needed to. The more informed you can become, the better.” 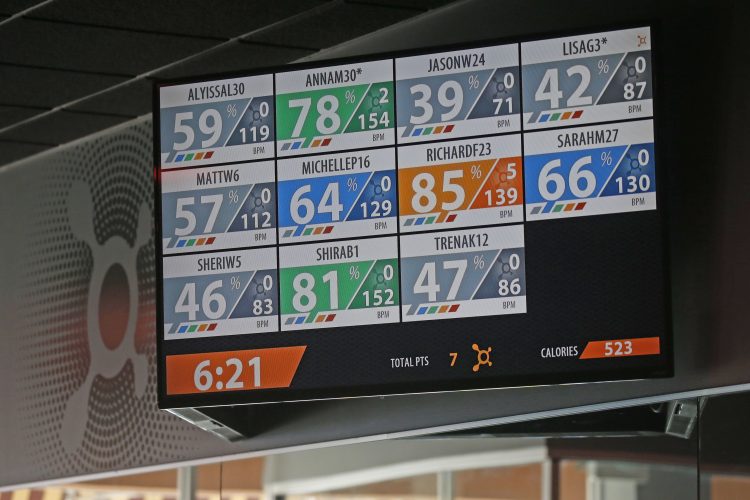 Each member who takes group classes at Orangetheory wears a heart rate monitor to let them know when they approach their maximum heart rate. (Robert Kirkham/Buffalo News)

“There are plenty of days I don’t want to work out,” Fink said, “but those are the days that are most important. You have to force yourself to do what you need to do to burn calories, and drive by places where you shouldn’t be eating.”

Fink turned to Orangetheory in Amherst to burn calories. He takes a late afternoon class five to six days a week in which workouts vary, keeping things interesting and targeting different muscle groups. Trainers help guide his fitness and exercise form during hourlong workouts split between challenging treadmill work and circuit training that includes rowing machines, free weights and TRX resistance bands. The workouts focus on “splat points” – one point for every minute in the Orange zone, 84 to 90 percent of your maximum heart rate. You want you to get 12 to 20 points per session to develop an “afterburn” that keeps you shedding calories for a day or so after your workout.

“When I go for my workout, I burn 800, 900 calories,” Fink said, “so technically, after my workout, I haven’t eaten because I’ve burned off breakfast and lunch.”

Your heart is a muscle that Fink compares to a Lamborghini. “If you walk every day, that’s good, but it’s like driving that car at 25 miles an hour,” he said. “You’ve got to open that up, raise that heart rate every once in a while, to make sure you’re working it.”

It’s important to check with your doctor before starting an exercise routine.

A new way of life

Fink has learned since last spring that hard, consistent work can pay off. “Being healthy is a second job,” he said.

He has lost 30 pounds since last year and his A1C level is down to 5.4 – below the prediabetic and diabetic range. He is taking a quarter the dose of his original diabetes prescription – and looks to soon get off it completely. He aims to stay this way.

“You can’t say, ‘I got rid of it, so I can eat doughnuts again.’ You don’t want to do that,” he said. “You can blow a whole workout with foods like that. You have to combine exercise with diet. People say they can’t lose weight. Don’t say you can’t. Say you’re not going to make the effort. If you’re not making the effort, who are you cheating?”

The ABCs of diabetes

Type 1 diabetes: Normally diagnosed in children and young adults. The body does not produce insulin, a hormone needed to convert sugar, starches and other food into energy the body’s cells need for daily life. Only 5 percent of people with diabetes have this form of the disease, which is treated with insulin therapy.

Type 2 diabetes: Almost 30 million Americans have Type 1 or 2 diabetes; Type 2 is by far the most common form. The body does not produce enough insulin, or the cells ignore the insulin, and glucose builds up in the bloodstream instead.

• It is more common as a percentage among African-Americans, Latinos, Native Americans and Asian Americans. Roughly one in four Americans age 65 and older has diabetes.

• More than 80 percent of those with Type 2 diabetes are overweight.

• Complications, which can vary widely and by degree, include glaucoma, cataracts and other eye problems; numbness in the feet; skin infections and skin disorders; hearing loss; depression; and high blood pressure, which raises your risk for heart attack, stroke and kidney disease.

• High blood sugar can overwork the kidneys, causing them to stop working properly. When diagnosed early, kidney disease can be slowed with treatment; when diagnosed later, kidney failure usually results.

Prediabetes: An estimated 86 million Americans have prediabetes. Before people develop Type 2 diabetes, they almost always have “prediabetes,” or blood glucose levels that are higher than normal but not yet high enough to be diagnosed as diabetes.

• Recent research has shown that some long-term damage to the body, especially the heart and circulatory system, may already be occurring during prediabetes.

Fasting Plasma Glucose: Levels of milligrams per deciliter of blood glucose after fasting at least 8 hours.

Oral Glucose Tolerance Test: Levels of milligrams per deciliter before and 2 hours after a sweet drink; most often used to test for diabetes during pregnancy. 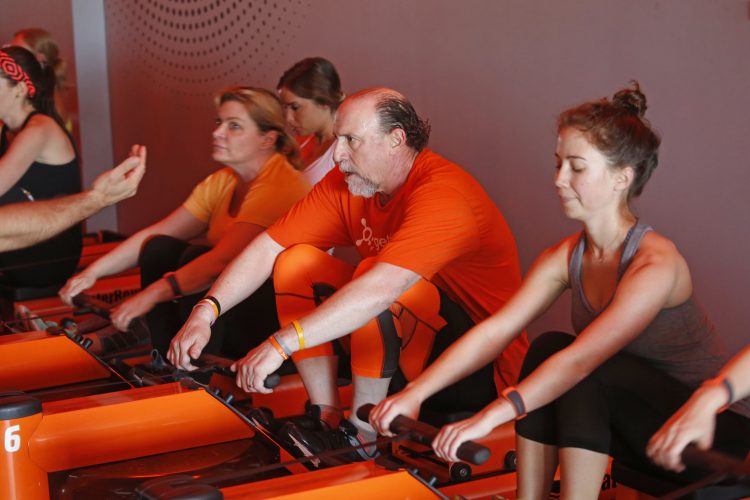 Exercise and a healthy diet are key to preventing prediabetes and diabetes, as well as better managing them. (Robert Kirkham/Buffalo News)

• Regular exercise and a healthy diet void of processed foods can help.

•  Medications and dialysis are treatments that may be required.

• “What to Expect When You Have Diabetes: 170 tips for living well with diabetes,” American Diabetes Association

• “The Diabetes Reset: Avoid it, control it, even reverse it – a doctor’s scientific program,” George King