Eric Fenar is a Type 1 diabetic who exercises regularly, rigorously measures his blood sugar levels and takes other steps to stay healthy.

Still, he says, "In life, it's tough to eat tofu and salad and grilled chicken every day."

He likes Asian food, pizza and beer too much for that.

This is why Fenar has become one of the biggest volunteer pitchmen in the country for an inhalable insulin drug called Afrezza – a drug that has helped the 34-year-old Buffalo public school teacher reach the most stable blood glucose levels he's had since he was diagnosed at age 10.

"There is a little bit of a learning curve," he said, "but now I have the power to fight those high blood sugars. Life is much more flexible."

Fenar discovered Afrezza during one of his routine online searches about better diabetes management. He testified at a 2014 federal Food and Drug Administration hearing to tout the promise of Afrezza for those like himself – before he'd even tried the drug. He met Al Mann, the creator, before the billionaire businessman died in February 2016.

Fenar grew up in Lancaster. He remembers the weekend he was diagnosed with Type 1 diabetes, because he watched on a hospital television set on Oct. 23, 1993, as Joe Carter hit a home run to help the Toronto Blue Jays win the World Series.

His diagnosis meant that his body produced no insulin to help him break down food. It also meant a lifetime of insulin injections and great sacrifices as he kept vigilant watch on his blood sugar levels – or so it seemed at the time. 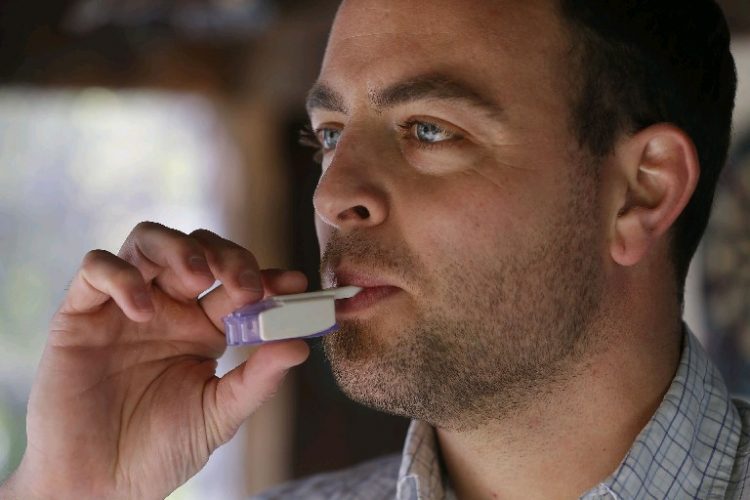 "I want people to be aware of this option," Eric Fenar says. "This is what I needed: a faster insulin."

"My family has always been up to date on the latest technologies," he said. "I was up to date on the shots for two years and mom read about the insulin pump. Back then it was only for people 18 and over. At this point, I was about 12."

His mother, Susan, a nurse, convinced doctors and health insurers that Fenar was capable of using a pump to monitor his glucose levels and give himself insulin without dispensing a potentially fatal overdose.

Years later, he started to use a Dexcom, a Bluetooth-compatible device that reads blood sugar without the need to do a finger-prick blood test. This allowed him to use his pump, or an injection, to push the correct amount of insulin into his bloodstream.

The challenge, Fenar said, is the lag time that comes with injectable insulin. It can take 45 minutes to an hour for the effect to take hold – causing damage from high blood sugar and running the risk of an insulin crash or overflow, particularly an hour or so before or after meals.

Dr. Howard Lippes, a Williamsville endocrinologist, assistant clinical professor with the University at Buffalo medical school and owner of R&B Medical Group, prescribes the inhalable drug to about 15 to 20 percent of his Type 1 adult diabetic patients.

Some use it regularly, others intermittently "to correct high glucose," he said. "There are pros and cons. It's not better. It's different."

Lippes doesn't count Afrezza's inhalability as a big advantage, "given the ease of today's insulin pen devices, which are simple and painless," he said. But he and patients who use it appreciate the speed in which it can control blood sugar levels.

For example, those like Fenar who enjoy pizza. When someone without diabetes eats pizza, or other food or drink loaded with carbs, the pancreas starts making insulin right away to compensate for the spike in blood sugar, which can cause inflammation and damage the cardiovascular system.

"If you're diabetic and eat a meal, you've got to give the insulin a running start if you want to catch the blood sugar before it goes up," Lippes said. "The timing of the meal can be a bit daunting. The Afrezza works really quickly, so that is an advantage for some patients."

It also has a shorter "tail" than injectable insulins, leaving the bloodstream faster so the danger of a lingering low blood sugar reaction diminishes, the doctor said.

Lippes prescribes Afrezza almost exclusively for those with Type 1 diabetes. It costs about the same as injectable insulin and is covered by most health insurance plans, he said.

Those with a cough or cold may not want to use it, Lippes said, and it is not recommended for those with asthma or chronic lung diseases like COPD. Its use is discouraged by those who smoke, "not that any diabetic should do that," Lippes said.

A small percentage of patients who try Afrezza get a throat irritation or cough, though the majority of patients tolerate it well.

Despite its advantages, the inhalable drug has yet to reach a critical mass in the diabetes drug industry.

Creator Mann ran 17 companies that helped improve pacemakers, cochlear implants and insulin pumps. He put $1 billion of his own money into Afrezza before he died, at age 90, and also was at work on developing an artificial retina.

Lippes blamed lagging Afrezza sales on the relatively small size of the drug-making company, MannKind, as well as the first inhalable drug, Exubera, which Pfizer introduced more than a decade ago, then pulled from the market in 2007. In that case, the inhalation device was so big, it couldn't fit into a purse – and looked like something you'd use to smoke illegal drugs. It proved too cumbersome for most who tried it, Lippes said.

He described the Afrezza inhaler as "a little whistle device," which dispenses powdered insulin in 4-, 8- and 12-unit doses. 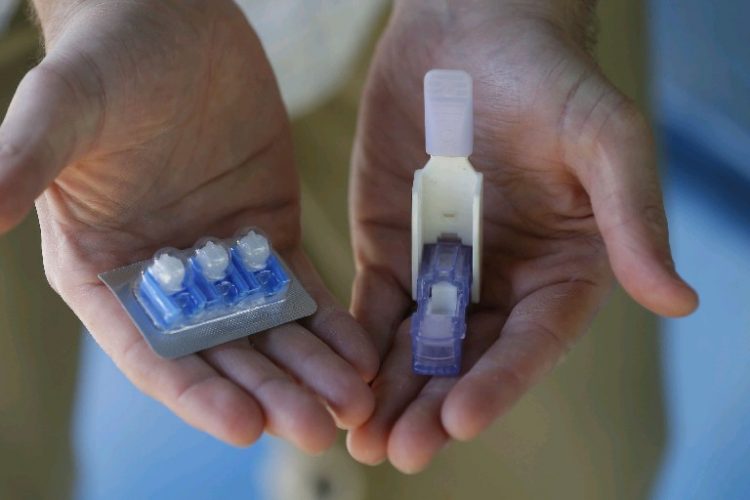 The Afrezza inhaler is a whistlelike device, which dispenses powdered insulin in 4-, 8- and 12-unit doses.

Fenar needs a basal insulin injection once a day, to keep his sugar levels stable while he sleeps. Otherwise, he has found reliability in the drug and delivery method he advocates.

"With Afrezza, I was able to get off my insulin pump," he said. "I used to carry what I called a diabetic man purse," with extra pump supplies and extra insulin. "Now, when I leave the house, I have a tenth of what I used to carry. I'm not connected to anything. And for my insulin needs, I take Afrezza.

"I want people to be aware of this option. This is what I needed: a faster insulin."

For Lippes, the drug represents one of several exciting new changes in diabetes treatment.

The next, he said, is the sensor augmented insulin pump. Medtronics Corp. – which recently hit the market with its variety, the 670G Pump – refers to it as "the artificial pancreas."

"It's not quite there yet," Lippes said, "but we're on the threshold of big changes with these new glucose sensor devices that can tell the insulin pump what to do in real time. … I have patients lined up to get it."