Let us salute the festive lines of summer.

Lines for the Viper at Darien Lake, as you watch the train whirl and listen to the screams. Lines for a concert at Canalside, as you chat with your neighbors while waiting to get frisked. Those are just two summer lines we've encountered on our 100 Things journey. Lines don't have to be a pain, like the line at the DMV. They can be gatherings, celebrations, parades.

Today brings us to the most colorful line of all, the line at Anderson's Frozen Custard.

We mean the flagship Anderson's, on Sheridan Drive. What history is here. Everything a Western New Yorker would want is within reach. Ted's Hot Dogs is just about across the street. Duff's, is just down a bit.

Anderson's gets traffic every time of year. In winter, a sleepy afternoon might suddenly turn busy because it starts snowing, and when it is snowing, Anderson's offers half-price cones.

But with the first tease of summer come the first real lines. 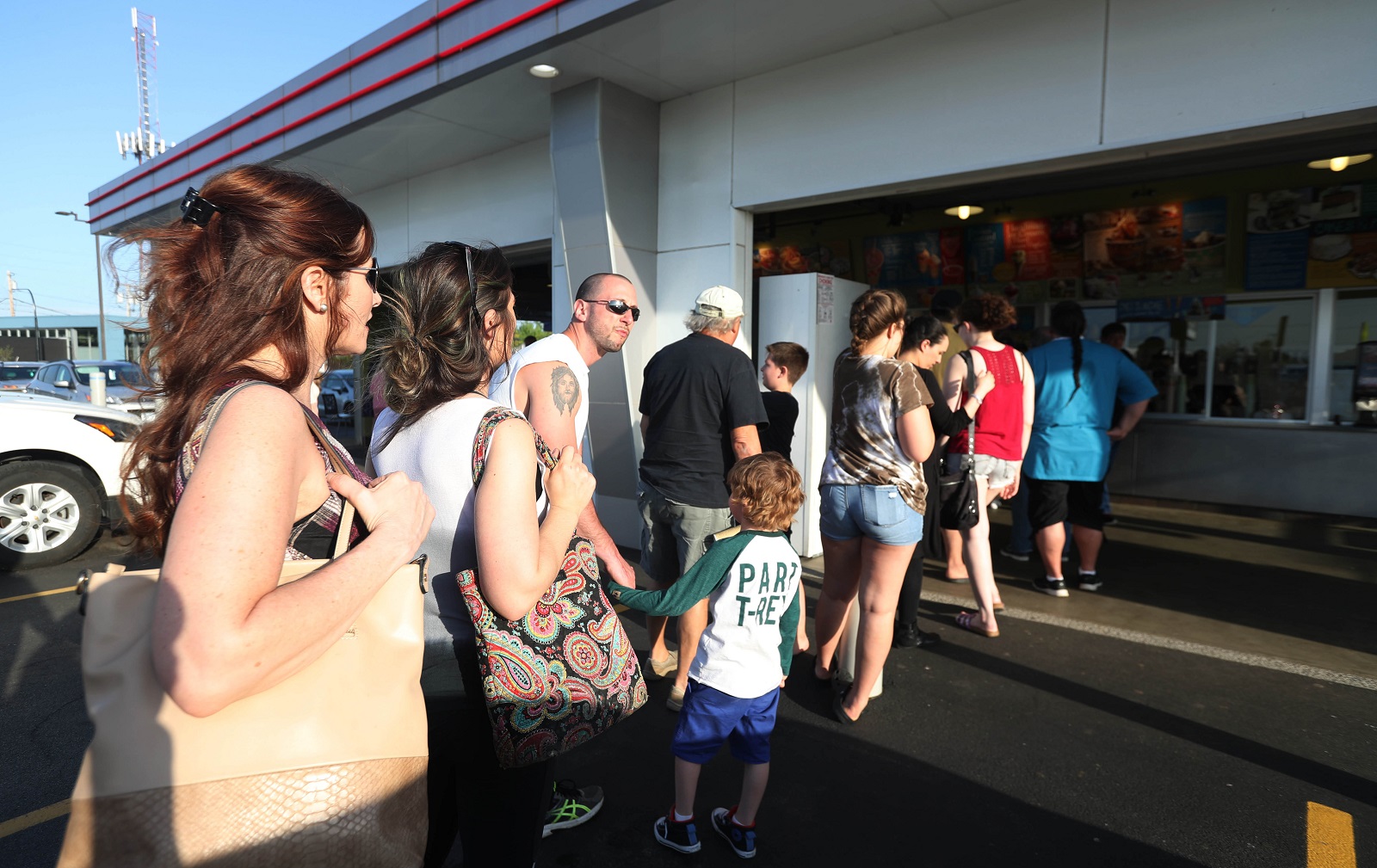 The line extends out into the sun, which makes waiting more bearable. (Sharon Cantillon/Buffalo News)

Folks flock here in flip-flops, sneakers, strollers, wheelchairs. On a recent warm evening a kid's bike lay on the ground, just tossed there. Strangers talked and laughed. At the head of the line, one woman was ordering for her whole family, reading off a meticulous list.

Carl Rizzo was pulling up with his wife, Pam, in a '76 Cadillac Coupe de Ville.

"We'll probably be here a lot this summer," Carley said. 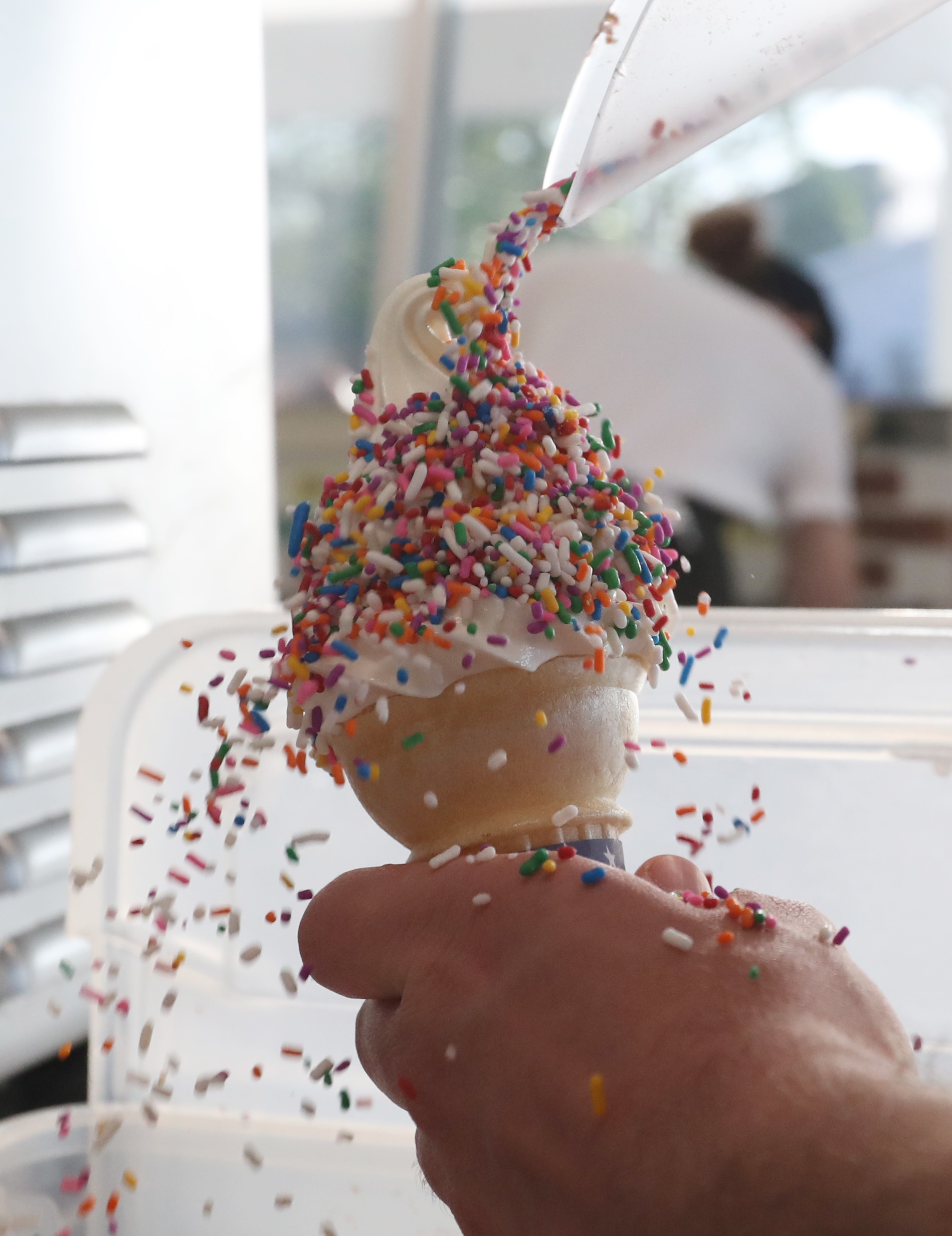 Janet Lopez, of Cheektowaga, usually gets the veggie sandwich. "It's delicious," she said. But tonight, she and her family were here for dessert.

"What is not to like about Anderson's?" she marveled.

The sweet, salty, sticky saga of Anderson's began in the 1940s. Carl Anderson, a lawyer who grew up in then-rural Amherst, had enlisted in the Navy when World War II broke out.

After the war, he and his Tonawanda wife, Greta, founded an ice cream shop in the Bronx. They ran it for a season, and it did well. But both wanted to return to the Buffalo area.

And they did. Initially, they set up shop on Kenmore Avenue and Claremont. A podiatrist's office is there now.

"Within three years, they were busting at the seams, so they bought a lot on Sheridan Drive," said Holly Anderson, one of Carl and Greta's five children. It was around 1951 and took them a year to build.

In the '60s, Anderson's began offering its signature beef on weck. Roast beef wouldn't tread on the turf of their friends at nearby Ted's. The Andersons also were friends and occasional collaborators with the Perry family, of Perry's Ice Cream.

Like Perry's, Anderson's is still family owned. Holly and her brother Keith are in charge now. Greta Anderson, now 99, keeps alert watch, continuing to enjoy the sweet smell of success.

"It's not the most creative thing, but vanilla is still the highest seller," she said. "It's such a rich flavor, both in soft serve and hard ice cream. A new flavor we have is Watson's sponge candy. We partnered with Watson's, put their sponge candy in ice cream. That's gone wildfire.

"Chocolate vanilla twist outsells everything. Together the flavors are perfect," she rhapsodized, her voice rising in her enthusiasm. "And we have our signature lemon ice. That was my dad's signature recipe from New York City in the 1940s." 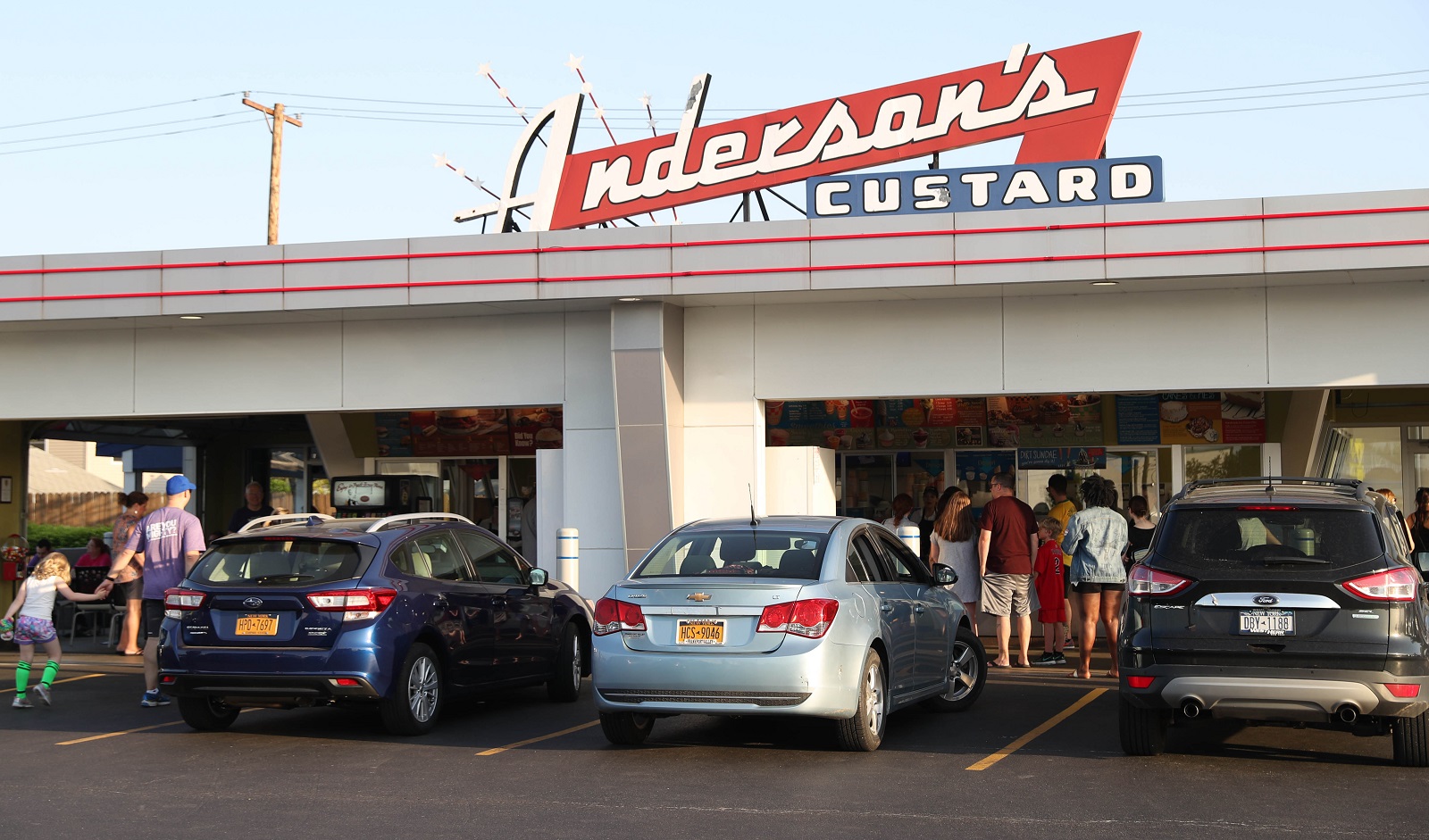 Anderson's location at 2235 Sheridan Dr. in the Town of Tonawanda was built in 1953. It's the oldest of the seven locations in the area which makes it the sentimental favorite. (Sharon Cantillon/Buffalo News)

The lines at Anderson's move a bit faster now than they used to be.

"Back in the day, it wasn't Anderson's unless you were standing in line," Holly Anderson said. "You had lines upon lines. For some reason, you didn't mind it as much. Now, you have to be on your phone. You have to be occupied, doing something."

That's a pity. It's much wiser to put the phone away. Live in the moment. Embrace the line at Anderson's as part of the lazy pace of summer.

Soak up the nostalgia, from the battered bike rack -- no doubt the original -- to the sliding windows. Meditate on sweet quandaries. Soft serve or hard ice cream? Sundae or banana split? Chocolate or vanilla?

On our recent visit, several folks were sitting on the back of a pickup truck, swinging their legs as they licked their cones. Tots spooned their soft-serve out of cups, taking their time so it turned into soup. May I recommend the frozen Greek yogurt? No calorie bargain, sure, but so rich, smooth and creamy.

There comes a time to indulge.