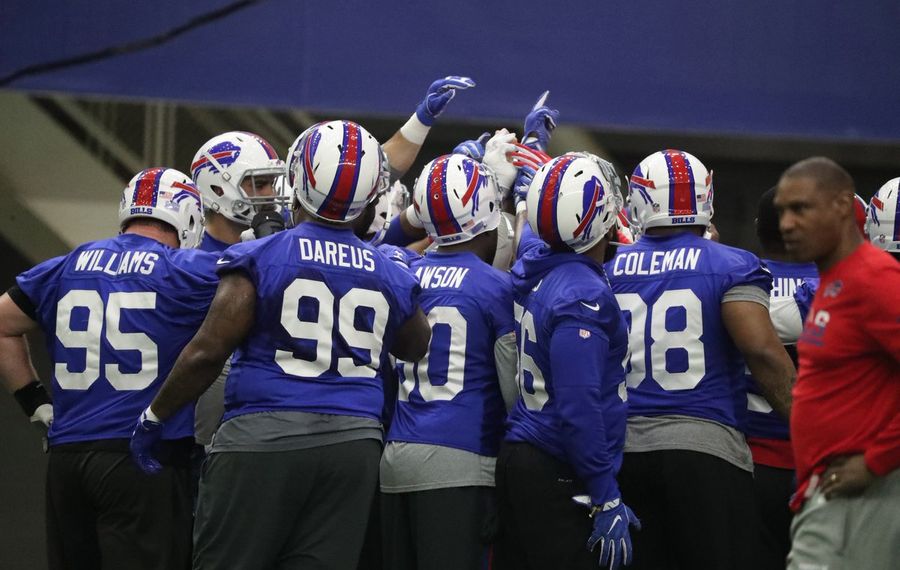 The calendar reads May 18, but you couldn't tell by watching the Buffalo Bills practice Thursday.

An intensity usually reserved for training camp was on display during the team's third organized team activity of the spring, highlighted by a pair of skirmishes inside the AdPro Sports Training Center.

First, defensive end Max Valles and tight end Keith Towbridge exchanged a combination of punches and slaps after a whistle (each still had their helmets on). Then, defensive end Shaq Lawson and right tackle Jordan Mills continued to go at each other well after the stoppage of play, with both players refusing to let go of the other's facemask. On the previous play, Lawson was slow to get up after appearing to hurt his right arm or wrist while being blocked by Mills. Coach Sean McDermott was right in the middle of the two players to break them up.

"It just got a little hostile," Lawson said after practices. "We was competing against each other all day, just trying to get each other better. It's part of practice."

The hostilities were a noticeable part of what was an up-tempo practice. After cornerback Shareece Wright intercepted quarterback Cardale Jones on a deep throw intended for Walter Powell in the end zone, the entire defense erupted and a dance party broke out. Later in practice, linebacker Preston Brown recovered a fumble by tight end Nick O'Leary, and again the defense went crazy.

"He changed the culture as soon as he came in," Lawson said of new coach Sean McDermott. "It's something that we needed here. It's been good ever since. He's holding everybody accountable and making sure everybody is doing what they have to do. We're doing every little thing right."