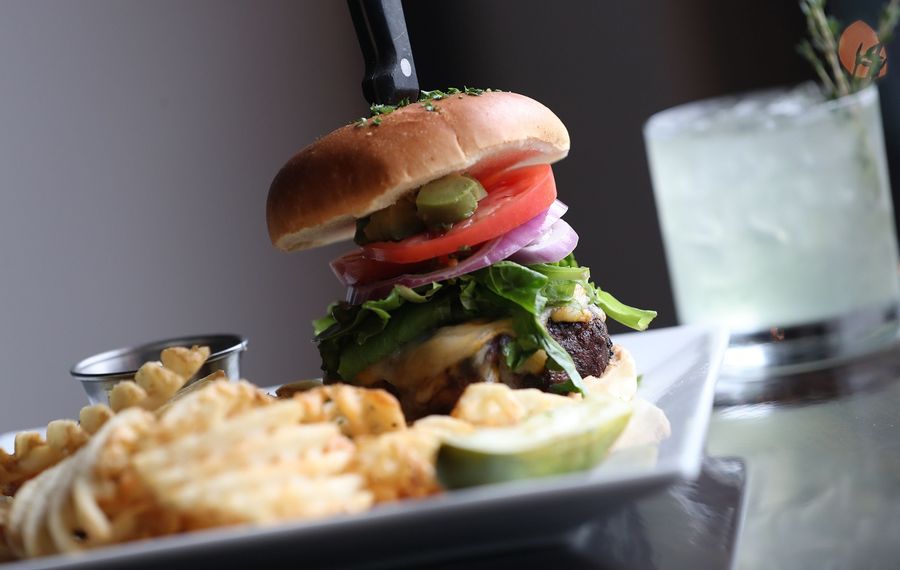 Over the years, I have learned to approach places advertising themselves as a bar and grill with humble expectations. The reason is right there in the name: it's a bar first.

With the bartender sometimes doubling as cook, food options beyond potato chips are a bonus. Bar and grill menus typically emphasize simplicity and familiar territory: burgers, sandwiches, wings and other deep-fried whatnot. At a bar and grill, offering German potato salad with the fish fry rates as a gesture of culinary adventure.

The Burning Buffalo Bar & Grill doesn't stick to the basics, offering a tavern-plus menu with glimmers of ambition. The meatloaf is bison. Potatoes with steak are fortified with crabmeat. A "slammer trio" fish special includes mahi-mahi with jerk sauce and cilantro pesto. Which brings me to how menu-writing is like Olympic vaulting: It's dangerous to choose a higher degree of difficulty if you don't stick the landing.

When we arrived at Burning Buffalo, we asked for a table on the patio. I enjoyed the view of how Hertel Avenue continues to develop into one of the city's most diverse restaurant zones, with new places going in next door and across the street. 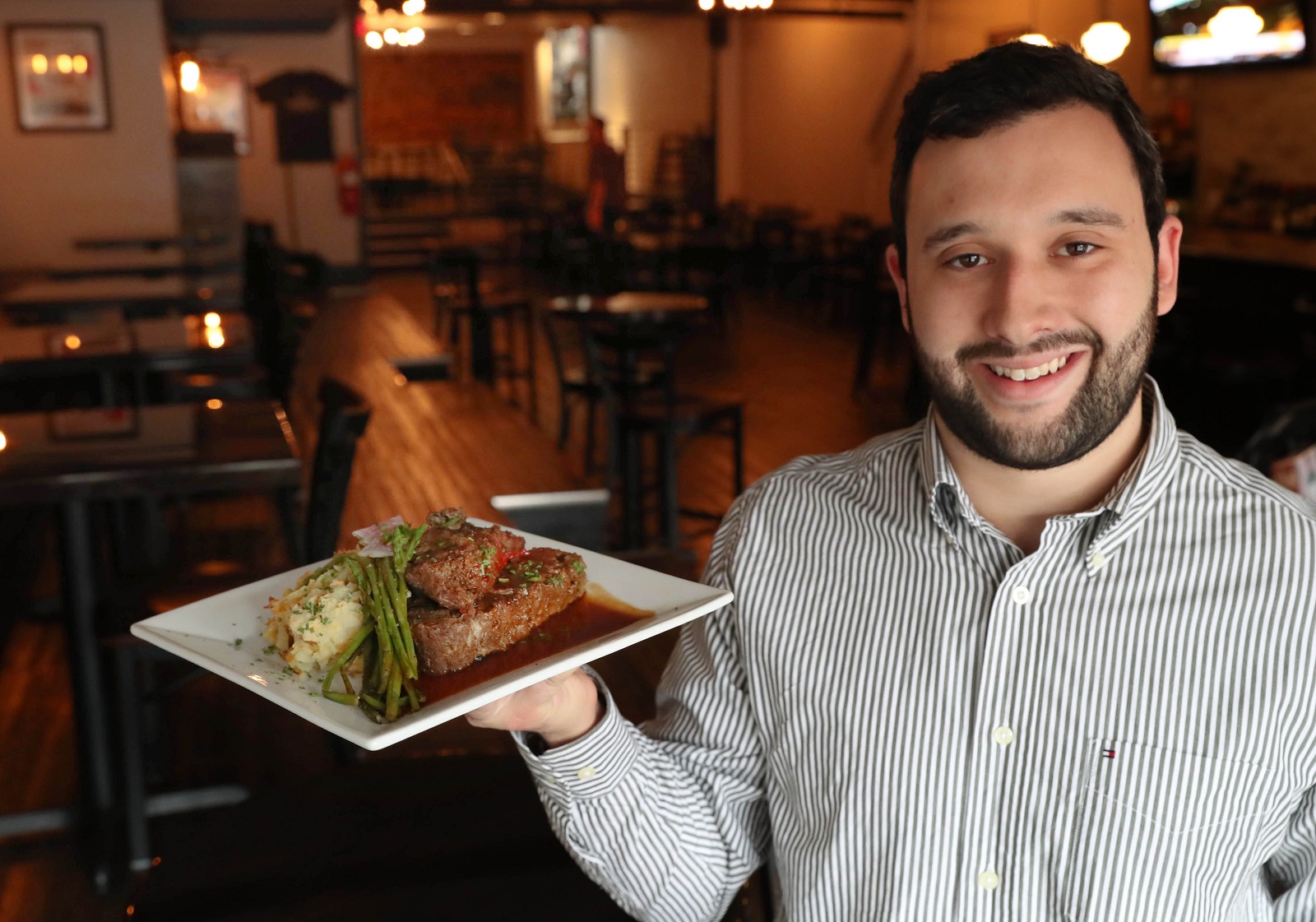 But the wind picked up and tried to topple one of the table umbrellas, so we adjourned to the interior. The room is lighter and shinier than its previous incarnation as the Shadow Lounge, a bar that featured live music. With tables lining the former stage, entertainment options are limited to a pair of television screens flanking the bar.

On entry, I got a big whiff of spilt beer, but that's everyday eau-de-tavern, and it didn’t bother me. As the room filled, the noise level rose, making it clear that a full house would make unamplified conversation difficult.

Menus are promises, casual contracts that restaurants make with hungry people. The more detailed the contract, the harder it is to fulfill.

Waffle fries should be right in a bar and grill's wheelhouse. Dead simple journey from bag to fryer to plate, a salty, crunchy pump-primer for another round of drafts. 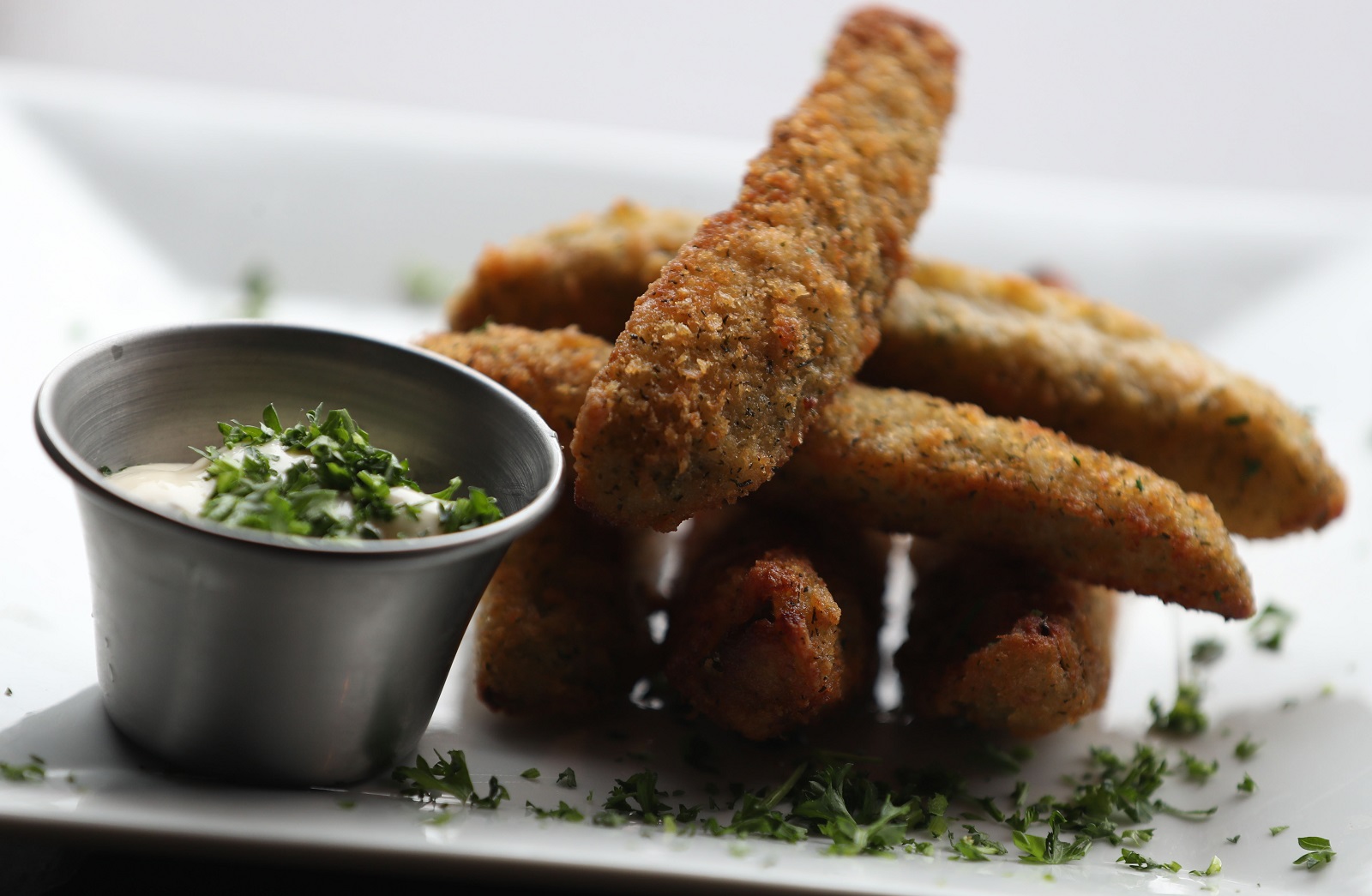 Burning Buffalo's menu promised waffle fries poutine style, with melted Gruyere and stout gravy ($10). What arrived was a plate of pale, corrugated potato disks graced with shreds of cheese that, judging from its scarcity, had been weighed out on a jeweler's scale. It was easy to count the strands because the undercooked fries were not hot enough to melt them all.

Short ribs, properly braised, are one of the most lush cuts of beef. The meat that arrived in the barbecue short rib biscuits ($9) was more corduroy than velvet, dry enough to make me consider a request for supplemental sauce. The biscuits, gilded with golden-brown swatches of cheddar, were flavorful.

Knowing that the chef was Chris Silverstein, who formerly operated the Cajun spot Lagniappes on Allen Street, I was expecting more from the alligator-chicken-crawfish jambalaya ($18). The firm-grained rice carried a spike of heat, and plenty of chunks of chicken breast. But they were woody. Crawfish tails were scarce and tiny, while the alligator was entirely lost on me. 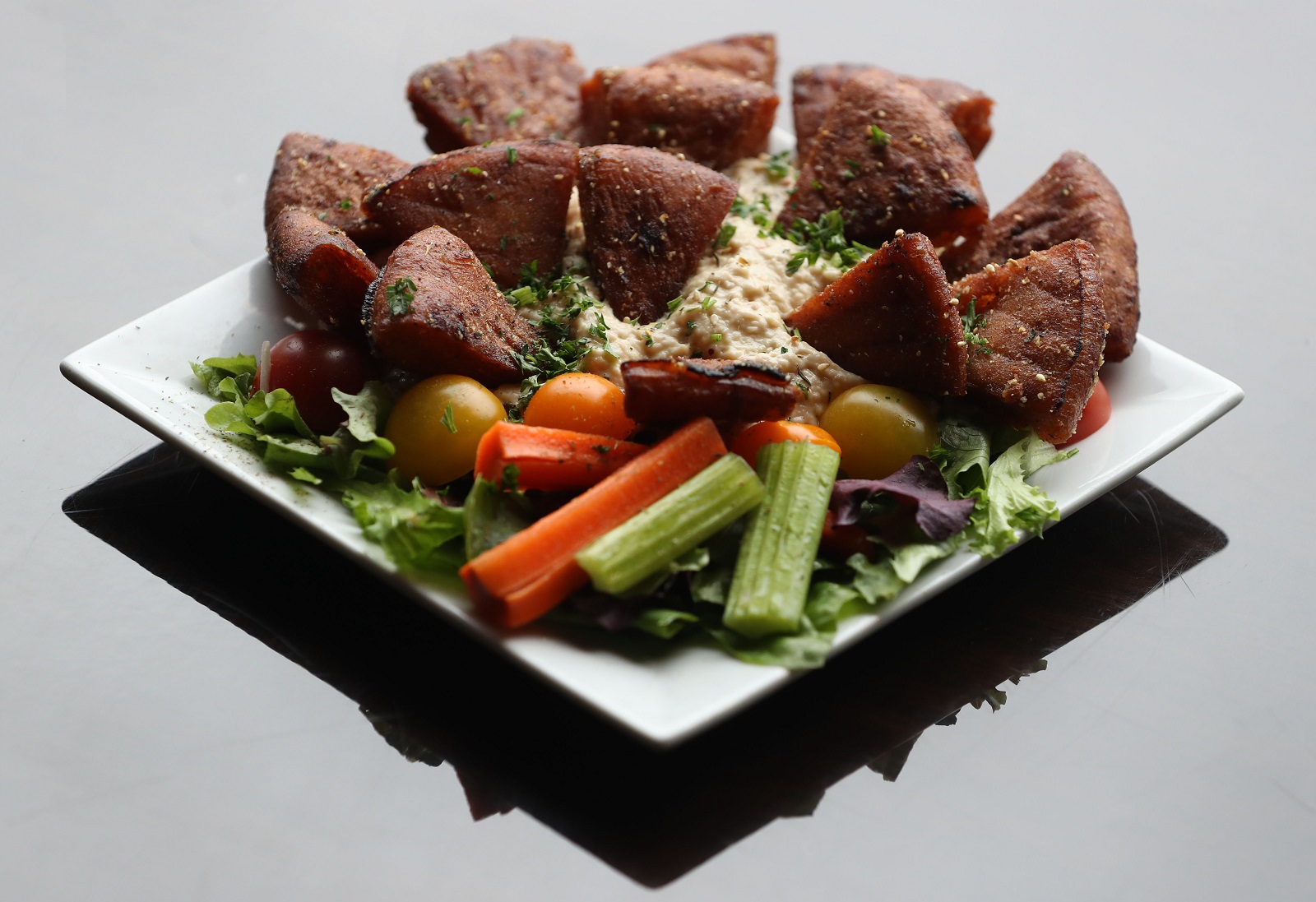 Helping the meal escape dismal territory were catfish fingers ($11), fish strips in a crispy, well-seasoned flour crust, served hot. We dipped them in spicy, smoky chipotle mayonnaise and wished we had ordered a double dose. After an attempt to juice up the tavern menu, the best thing I tried at Burning Buffalo was good old fried fish.

A trio of slammers ($14), three-bite burgers, were all fish: more of that crispy catfish, a decently moist slice of grilled swordfish with a tangy lemon aioli, and mahi-mahi with the allspice accent of jerk sauce. 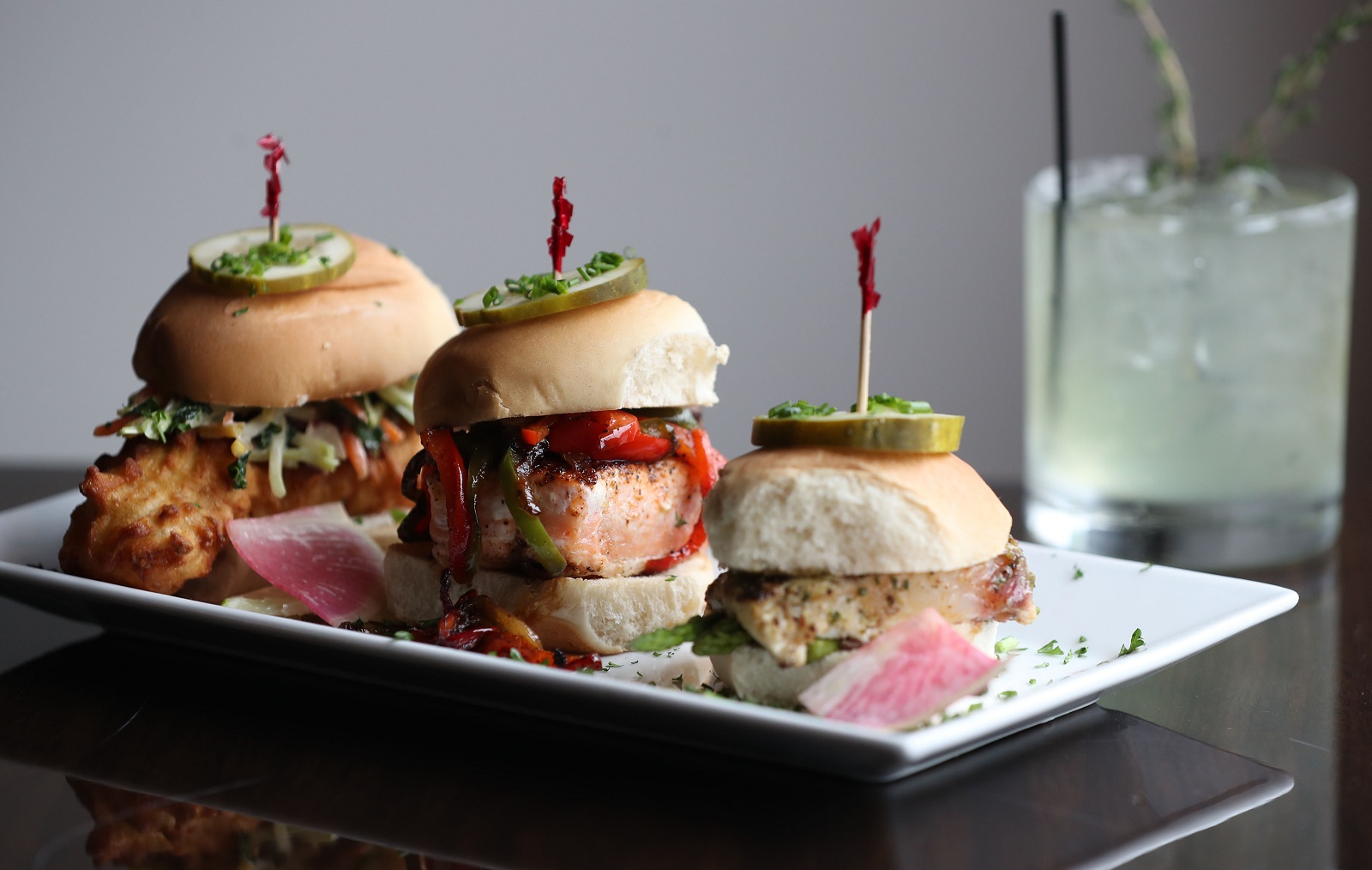 The Slammer Special is a trio which consists of the chef's choice. From left are battered cod with house slaw, blackened salmon with peppers and onions and grilled sea bass with chimichurri and asparagus. (Sharon Cantillon/Buffalo News)

Bison meatloaf ($18) was a plentiful, tasty helping with a sweetly caramelized crust that added welcome texture. Its mashed potatoes partner was satisfyingly lumpy and laced with cheddar. A bouquet of wilted asparagus dragged the plate down. 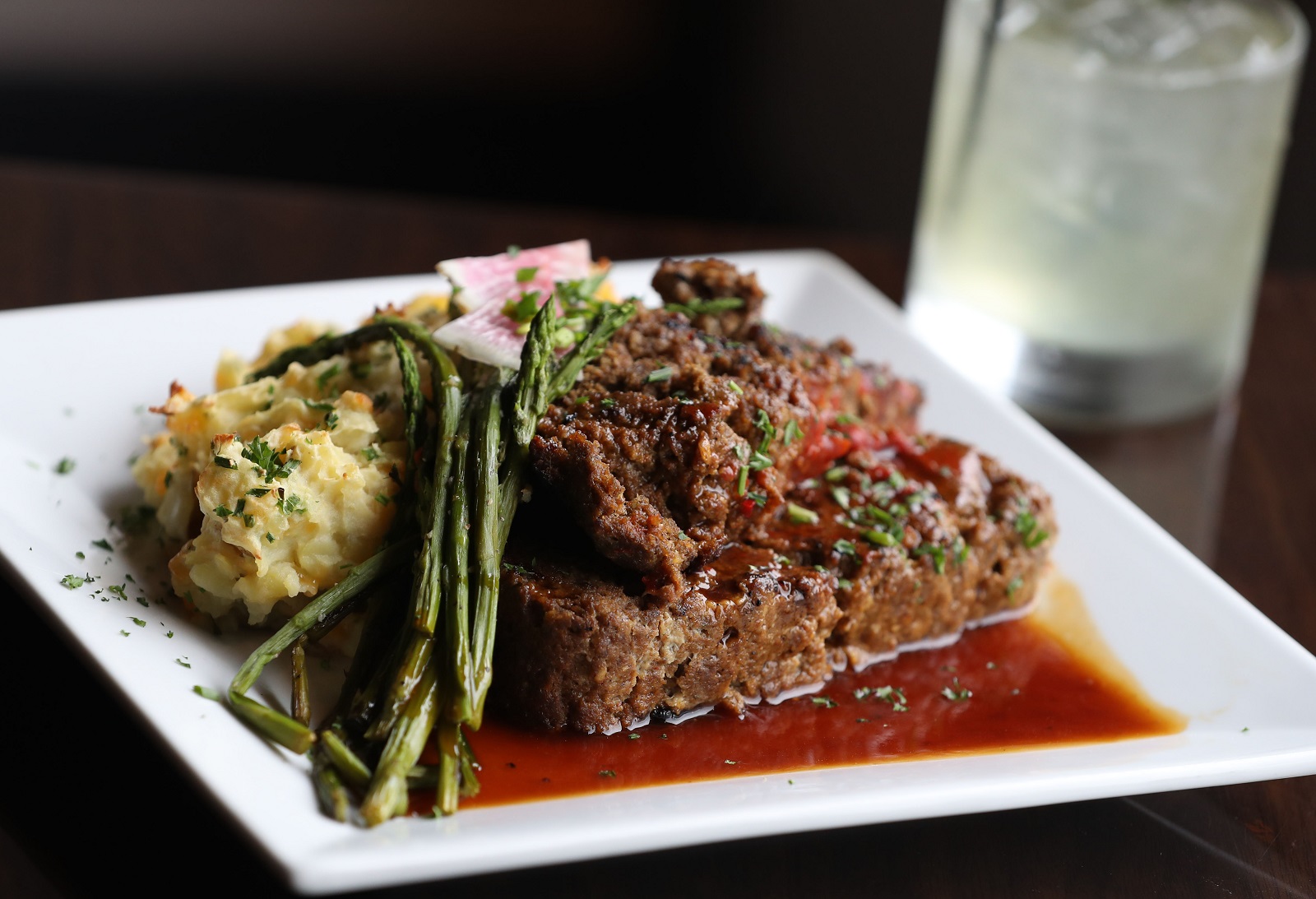 More deflated asparagus joined the steak dinner ($19), filet ordered medium rare and delivered medium well, making it the chewiest filet I've met in ages. Its coat of "voodoo sauce," a Cajun-spiced gravy, jazzed up the proceedings but could not resuscitate the beef. Crabmeat was mixed with the sweet potatoes underneath, creating an uneasy partnership of sea and earth.

When I went for dinner on one of the most competitive streets in an increasingly competitive restaurant town, I expected better. The menu for my dinner at The Burning Buffalo offered fireworks, but too often, the promise fizzled.

Hours: 3 p.m. to midnight Monday through Thursday and Sunday, 3 p.m. to 2 a.m. Friday and Saturday. 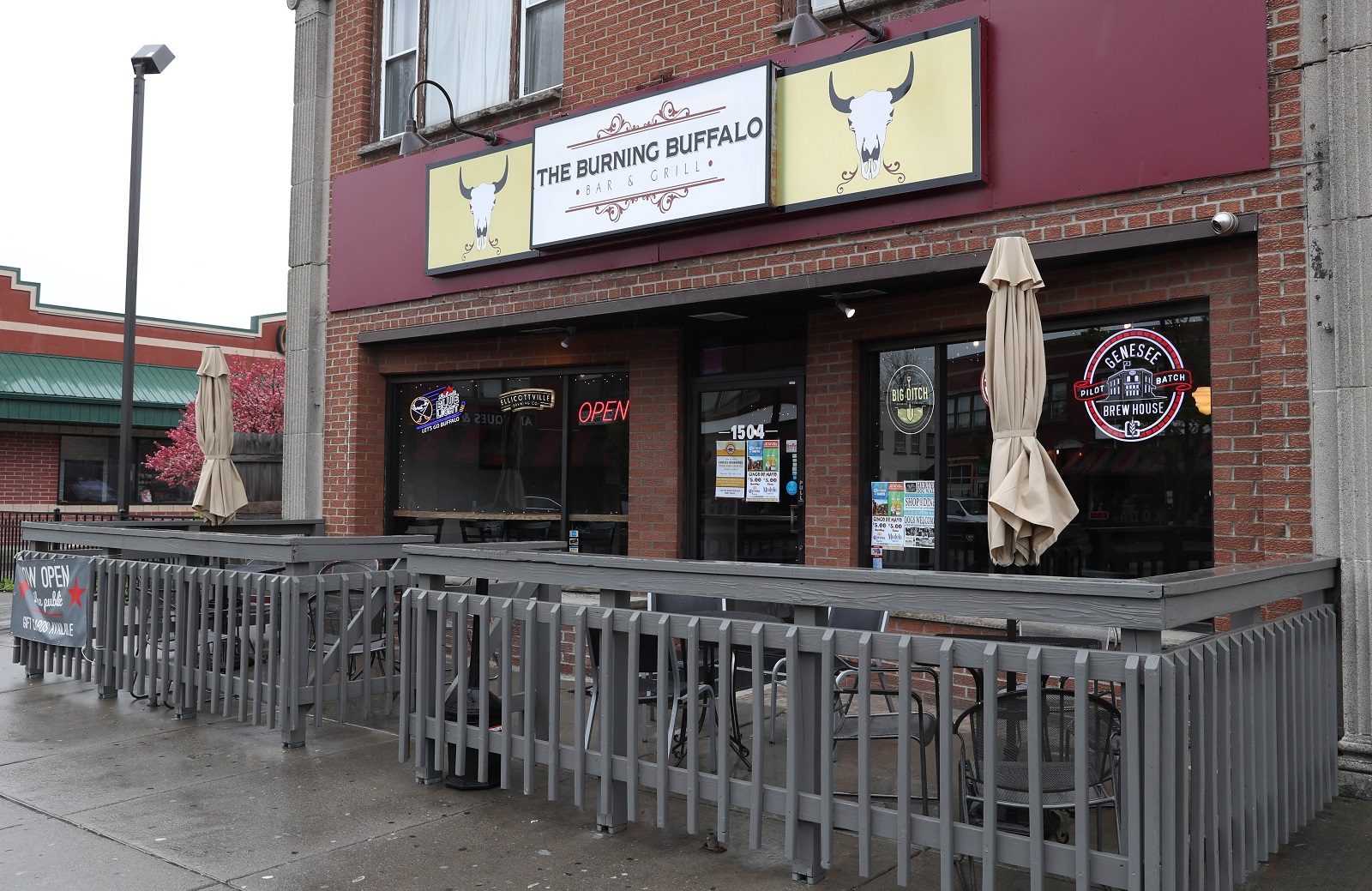