It was a refrain commonly heard throughout our house as a child: “If you keep misbehaving, I’ll send you to Father Baker’s!”

My mother never told me Father Baker had died 50 years earlier and that the orphanage so intimately linked to the iconic priest had closed. Perhaps my grandmother had also failed to mention these seemingly important details to my mother as a child. Regardless, it was the threat from my mother — and a disapproving glance from my father — that was often enough to straighten me out.

Threatening to drop off your child, suitcase in tow, at the steps of Father Baker’s orphanage was common practice, passed down from generation to generation, if you grew up in Buffalo and its neighboring suburbs. But what of the orphanage? How did it start, and whatever happened to it?

The origins of Father Baker’s orphanage, surprisingly, predate the priest. In 1857, St. Joseph’s Orphan Boys Asylum opened in what was then referred to as Limestone Hill, the future site of Our Lady of Victory Basilica. In 1864, St. John’s Protectory, which housed older boys, was built.

[A Closer Look: Our Lady of Victory Basilica]

It was around this same time that Nelson Baker, who worked in his family’s general store in Buffalo, enlisted in the U.S. Army to fight against encroaching Confederate soldiers in Pennsylvania led by General Robert E. Lee. After the Civil War, Nelson abandoned a profitable business venture, a grain and feed store, to pursue the priesthood. It soon led him to Limestone Hill. 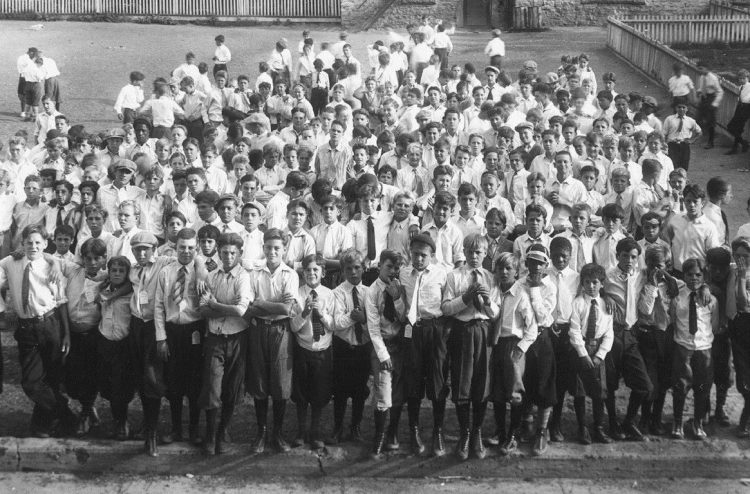 More than 100,000 boys, including this group, passed through Father Baker’s orphanage. (Photo courtesy of Rev. Msgr. Paul J.E. Burkard, president of Our Lady of Victory Institutions)

Upon becoming superintendent of the struggling parish, whose debt had amassed to well over $60,000, Father Baker paid its creditors from his own savings until the parish could pay off the rest. He wrote to countless fellow Catholics, promising their names would be mentioned in prayers if they each donated 25 cents to his orphaned boys.

Some of those very same boys were assembled into a band, and they toured around the city on the back of a flatbed truck with a big “Father Baker’s Boys” banner adorning its sides, bringing much-needed attention and revenue to his orphanage.

Soon, all debt was paid off, a new chapel was constructed, and additions to the orphanage and protectory were built. Later, a home for children born out of wedlock and their mothers was also constructed. It is estimated that more than 100,000 boys passed through Father Baker’s orphanage. During the Great Depression, they slept on mattresses in hallways as more and more children were abandoned by their parents.

Today, however, the orphanage that we were threatened with no longer exists. In its place is Baker Victory Services, which offers a variety of social services, including residential programs, educational programming, services for individuals with developmental disabilities, and foster care. It continues Father Baker’s legacy of compassion from when he very first stepped foot in Limestone Hill more than 130 years ago.