Buffalo's art-world glitterati, if there is such a thing, has rarely gone out of its way to visit Bailey Avenue.

But increasingly, there are exceptions. The Bailey Fights Blight initiative has decorated derelict storefronts and other spots along the avenue in recent years. A new, retina-burning, neon green mural by Team Razor Wire now adorns the south and west sides of the Sunrise Coin Laundry and Dry Cleaners at Bailey and Stockbridge avenues.

[View a gallery of photographs from "Buffalo Works."]

And now, a group of Buffalo photographers will be showing their work in Buffalo Paint & Wallpaper, a family owned business that has operated at 2917 Bailey Ave. since 1983. The one-night exhibition, titled "Buffalo Works" and planned for 6 p.m. to midnight May 19, will feature the work of 10 photographers exploring Buffalo's changing economy.

"Bailey Avenue is the longest street in Buffalo, and one of the least understood," said exhibition co-organizer Chris Hawley. "The Buffalo resurgence narrative has rarely turned its attention toward places like Bailey Avenue, which is why Buffalo Paint & Wallpaper was chosen as the pop up location." 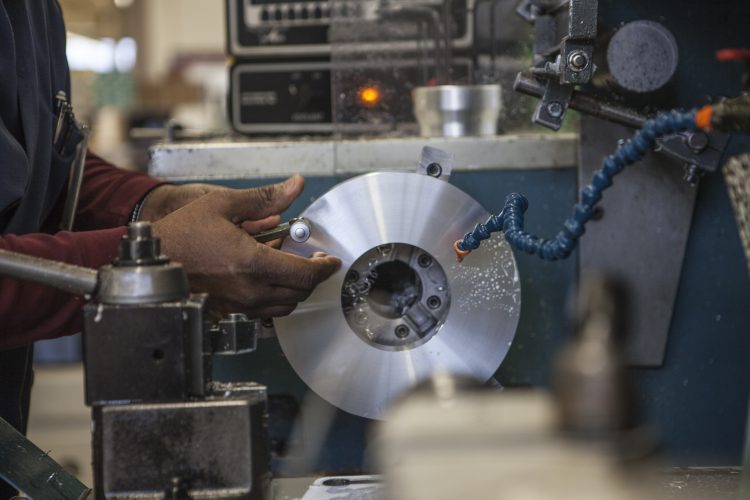 Gordon Sweat, a machinist at Moog in Elma, machining a part. Sweat has worked at the company since 1980. March 6, 2017. Elma, NY (Photo by Brendan Bannon). Click on the photo for a gallery of other examples from the exhibition.

This is the second in a series of pop-up shows at out-of-the-way locations on or near the East Side. The first was held in February in the hidden Saddle Up Saloon on Hubbard Street.

Participants include well-known Buffalo artists and photographers Brendan Bannon, Molly Jarboe, Kate Stapleton Parzych and David Torke, who said that the show will "reveal what is new about the city's economy, as well as the resilience of survivors of its economic transition."