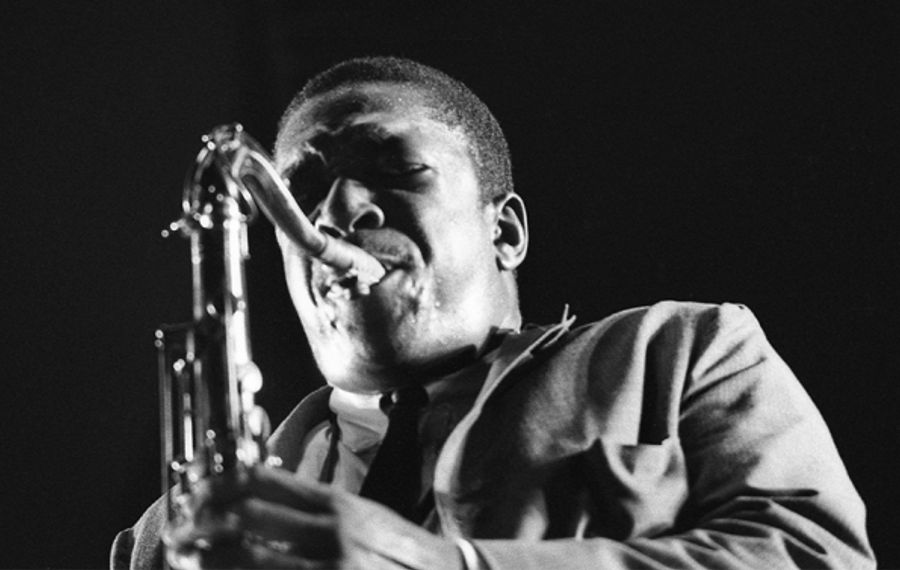 Everyone has a John Coltrane story. Everyone who ever encountered him, that is.

His life was so horribly short (he died of liver cancer at 40 in 1967) and so musically puzzling and disturbing at the end that those tales never get old. All of us who experienced him at all in the flesh (I spent an evening watching him perform at the late and long lamented Royal Arms) have been driving people crazy with the stories for decades.

Jackie McLean, the great alto saxophonist who taught briefly at the State University of Buffalo, used to tell everyone he knew about watching Coltrane performing such intense marathon performances that sweat poured profusely down his legs and caused his socks to disappear into his shoes. That's just about the only story they missed.

John Scheinfeld's "Chasing Trane: The John Coltrane Documentary," which has a limited showing at the Screening Room Cinema Cafe at the Boulevard Mall, is a small miracle. It's the Coltrane documentary most of us never thought we'd see and it's superb. Whether we're hearing his stepdaughter telling moving stories of Coltrane walking many late-night miles to get home to her and her mother or seeing an explosion of film and photos we've never seen before, this is a movie that has nothing but surprises for the most informed Coltrane acolytes. No Coltrane fan should miss it. At the same time, nor should anyone who wants a thorough grounding in one of our greatest 20th century musicians.

None of this was even remotely predictable, even for those who knew many of the stories. To hear his kids--particularly his all-but-unknown stepdaughter with first wife Naima--pay tribute to his fatherly devotion is something we might have guessed but still pushes him even farther toward sainthood than we might have guessed.

To have his own kids tell about overhearing his agonies in the next bedroom while going cold turkey to quit drugs is a bit of stark reality in his life we never thought we'd know.

Coltrane didn't like to talk. His loquacity was musical. He gave one interview in his life --to Marxist critic and historian Frank Kofsky (he died in 1997) who was grateful, ever afterward, to the musician being so frank about his mouthpiece problems. (Non-musicians seldom think to bring up about such things.)

To know a bit about the subject is to wonder about what's omitted from the cornucopia of new information and speculation that's here. One subject some of us never tire of is Coltrane's relationship with drummer Elvin Jones, who may have been, in some ways, the profane voice of his search for the sacred. That isn't explored.

In other words, this is a film that couldn't possibly have answered every open question. But so what? It is so full of things about an American musical giant that it is, automatically, one of the greatest of all jazz documentaries.

Even what we now call "Late Coltrane," i.e. his final difficult music--is handled with grace instead of polemics. One of Scheinfeld's talking heads is Wynton Marsalis who has, in his life, been harsh indeed on the subject of "late Coltrane."

Coltrane always deserved a film like this. So did his audience. What a shock it proves to be when prayers are answered and we finally get the Coltrane movie we wanted.

In jazz, we get used to a place in jazz lives where new information just stops. When the market for information has stalled inside musical history, we start presuming we've seen all the pictures and film footage we'll ever know. And we've heard all the stories we'll ever hear.

Not so, as this incredible film proves in its 99 minutes. There was a ton of new Coltrane material to be unearthed. And even when facts aren't new there are radically fresh perspectives that are irreplaceable.

Who, on earth, ever thought we'd be hearing radical claims for John Coltrane's art made by a former president of the United States? And yet Bill Clinton, sometime saxophonist and, it turns out, an amateur jazz critic of serious chutzpah, compares Coltrane's musical development to seeing a full Picasso career retrospective. He says their art was similarly metamorphic but that Coltrane's tumultuous stylistic changes "took 20 years less time." There isn't a music critic or art critic in the world who'd let that contention stand unchallenged or un-amended. But that's exactly what makes its confident, street hyperbole so exhilarating.

This is pretty close to the Coltrane doc of our dreams. Which is why I can't imagine anyone who ever loved his music missing when it plays over the next week in the Screening Room.

The filmmaker is John Schienfeld, who has made films before about Bing Crosby, Harry Nilsson and John Lennon. The subject matter here has given him access to people he'd likely never have counted on before--the former president, Denzel Washington (who was tapped to read Coltrane's words.)

Even in death, Coltrane retains the power, I think, to remake careers.

Four stars out of four