A development team that hopes to turn a former East Side manufacturing site into a new residential complex will add 25 townhomes to its plan and reduce the number of apartments.

Stuart Alexander and Associates and its development partners want to turn the site of the former Buffalo Forge Manufacturing Plant at 490 Broadway into The Forge on Broadway, a residential community with a focus on health and wellness.

The developers changed the 230,000-square-foot proposal after hearing ideas from the community at meetings held in April at the Michigan Street Baptist Church.

Plans for the $48 million project now call for 159 apartments, retail space along Broadway and 25 townhomes. The 13-acre project is slated to be considered by the Buffalo Planning Board on Monday. It would also include fitness areas, including a "green roof" for gardening, play space and exercise, as well as a bike-share program, walking track and cooking classes for tenants.

"The team was encouraged and inspired by the conversation and dedication to the community," according to a news release from the development team, which also includes Rhonda Ricks' R+A+R Development and Stratford Capital Group's SCG Development.

The team said it wants to "provide housing for many who otherwise are being priced out of Buffalo's growth." 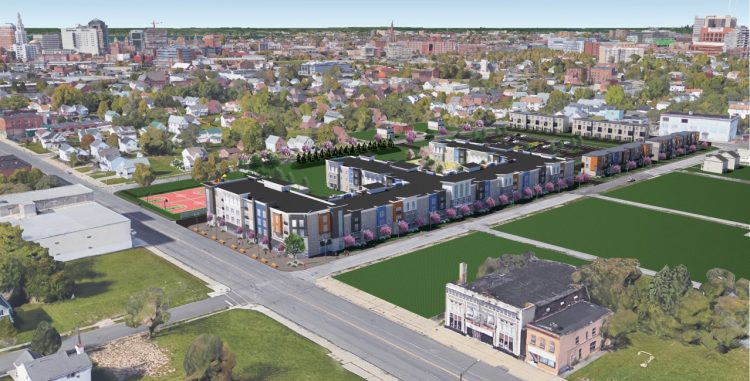 According to public documents, the new plan by Silvestri Architects calls for: 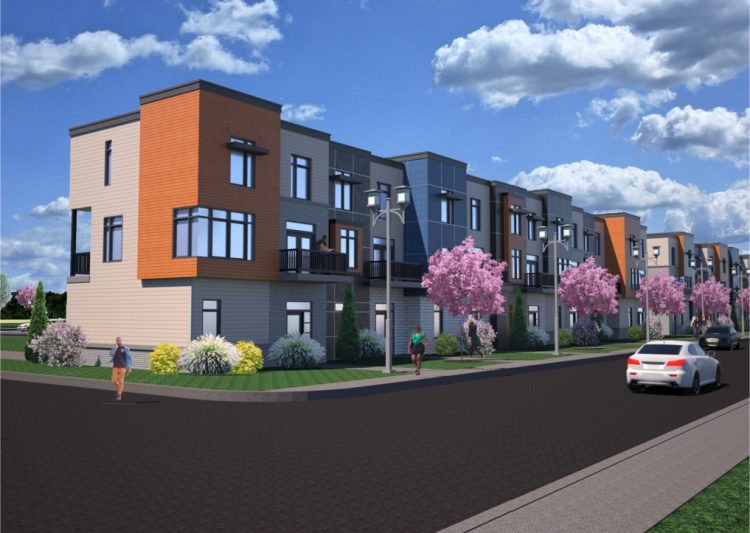 The blue, red and gray facades of the buildings would still feature a mixture of architectural block, brick, aluminum panels and horizontal lap siding.

The overall site would include 255 spaces in three major parking areas, including one beneath the green roof, which would feature two exercise areas and two playgrounds. Three more exercise areas, a jogging path, a landscaped berm along Spring Street and other greenery are also planned, according to the documents.

The property is surrounded by residential neighborhoods, but it's zoned as "flex-commercial," which would normally not allow for first-floor residential space. Rather than seek about seven variances under the Green Code, the developers are pursuing the large project as a "planned-unit development" that allows multiple uses within a single parcel. That must be approved by the Common Council and conducted under a comprehensive plan.

The land, which is owned by Howden International, is under contract to be acquired, but the developers won't close unless they have the required approvals in place. The site is in the Brownfield Cleanup Program, which makes it eligible for brownfield tax credits for redevelopment. Alexander said the developers also will seek low-income housing tax credits and funding from the state Housing Finance Agency. Alexander said officials have not decided whether to seek tax breaks from the Erie County Industrial Development Agency.

If approved, construction would last about 18 months.