Move over, Shark Girl. Have a seat, Scary Lucy.

There's a new statue in town that bears the likeness of Mark Twain, cast in bronze and already seated on its own bronze park bench.

The artwork was delivered earlier this week to the Ellicott Square building, where it will be on permanent display in the interior courtyard of the historic office complex.

For the time being, the statue rests, inauspiciously, in the northwest corner of the lobby, awaiting its eventual dedication space."We're trying to find a nice place in the lobby to put it but, right now, we're building the base for it," said Carl Paladino, founder and owner of Ellicott Development Co., which manages Ellicott Square. 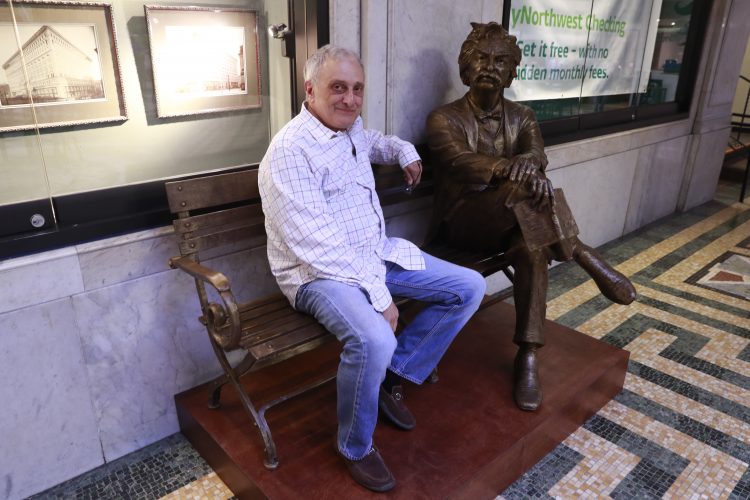 Developer Carl Paladino sits with a new statue of Mark Twain on a bench in the lobby of the Ellicott Square Building. (John Hickey/Buffalo News)

The often brash businessman and Buffalo School Board member was sentimental Thursday when explaining the reason why the statue ended up in the Ellicott Square lobby.

Its presence there is the fulfillment of a promise he made to Irene Liguori, who died at the age of 52 in 2009.

Liguori, a reporter at both The Buffalo News and the former Courier Express, had long planned to establish a museum dedicated to Mark Twain. The 19th century American humorist, novelist and newspaperman was a native Missourian, but resided in Buffalo from 1869 to 1871.

Liguori was an avid fan of the man born Samuel Langhorne Clemens, and she wanted to honor his connection to Buffalo and his legacy.

"Irene was a Mark Twain follower. She formed a group of people who wanted to share with the people in Buffalo what great things Mark Twain did here," Paladino said.

Liguori, along with Paladino's wife, Cathy,and others, held fundraisers in the Ellicott Square lobby in an effort to purchase a mansion on North Street in the city's Allentown neighborhood to house the museum. They raised about $100,000.

Yet, despite the time, energy and thousands of dollars of her resources that Liguori dedicated to her vision, the museum project failed to take off.

Not wanting to see her dream completely unrealized, Liguori made plans for the funds she raised, said her husband, Robert.

"So she donates the money to the (Buffalo History Museum), with a letter to the state, basically saying 'I want the Historical Society to fulfill my dream of cultural tourism and providing information on Mark Twain, and I want a statue designed by Gary Lee Price from Utah placed in the lobby of the Ellicott Square building,' " Robert Liguori recalled.

"She asked me one day, she says, 'Carl, if I get a bronze Mark Twain put together, can I put it in the lobby of the Ellicott Square, because he had offices here at one time?'

The 10-story Italian Renaissance structure was completed in 1896, which was 25 years after Twain departed from Buffalo.

However, Ellicott Square exists on the same site where the Buffalo Express building once stood, according to Robert Liguori.

"Mark Twain's father-in-law, Jervis Langdon, staked (Twain) one-third of the investment in the Buffalo Express when he moved to Buffalo from 1869 to 1871," Robert Liguori said.

"The Buffalo Express was located on the site of the Ellicott Square Building, right there on the corner of Washington and Swan. Carl Paladino and Mark Twain share air space. So Irene was blown away that our dear friends, the Paladinos are there," he added.

The Mark Twain, 52 inches high by 60 inches wide, "is first in a series of life-sized bronze sculptures celebrating 'Great Contributors' of the arts, literature, science, philosophy and music," according to the sculptor's website.

Robert Liguori said he and his girlfriend visited Price's studio and foundry in Mapleton, Utah, where they met the sculptor and his son.

"What they did that was very kind., They agreed to honor the price that they had quoted to Irene in 2005. The cost, with everything going on with copper, had basically doubled. But Gary Lee Price and his son ... honored the (original) deal," Robert Liguori said.

He said an official dedication ceremony is planned for the summer, which will include his and Irene's daughter, Julia.

"What Julia and what I wanted, with the help of my friends, with Carl and his wife, Cathy, and the whole Mark Twain board, we wanted Irene's wish to come true to have a bronze designed by Gary Lee Price in the lobby of Ellicott Square," Robert Liguori said.