Reality slowly disintegrates into a fragmented nightmare in "The Father," a chilling one-act by the French playwright Florian Zeller that opened April 28 in the Kavinoky Theatre.

Zeller's story, set inside the addled mind of a man suffering from dementia, is more frightening than any horror film playing in your local cineplex. It follows Andre (David Lamb) as he travels farther away from himself and his memories, watching his family members turn into strangers and familiar parts of his world vanish into the ether.

The playwright describes "The Father" as "a tragic farce," which is a very French way of saying that, well, so is life.

The overarching effect, directed with confidence and sensitivity by Robert Waterhouse and keenly designed by David King, is pure, unadulterated dread. The walk to the car isn't easy. But that walk -- and the conversation later over drinks or on the ride home -- makes this production one of the season's essential theatergoing experiences. 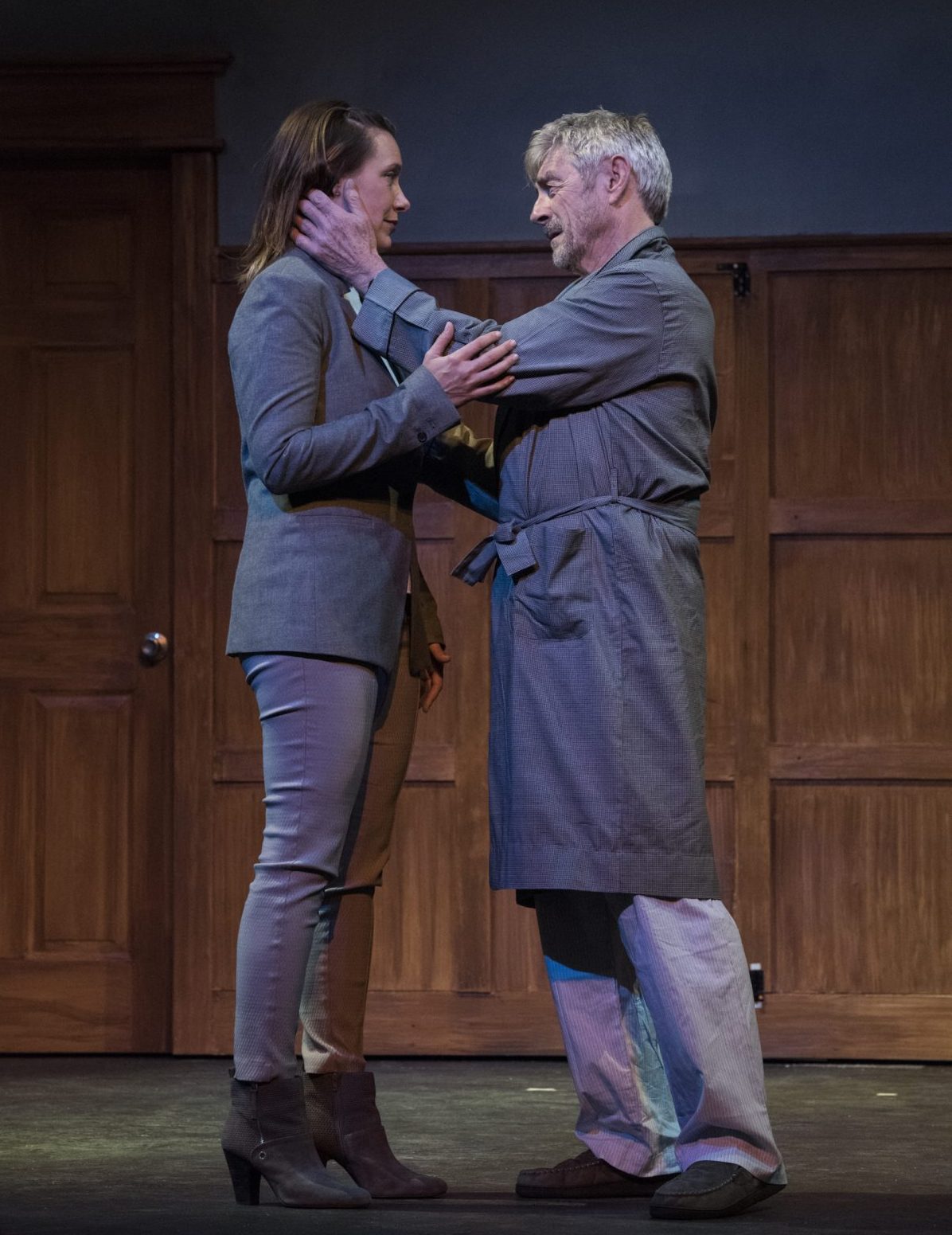 Aleks Malejs and David Lamb appear in the Kavinoky Theatre's production of "The Father."

What distinguishes "The Father" from other plays and films about the subject is its effectiveness in transferring the experience of dementia to the audience. Rather than a chronicle of a man's slide into dementia observed from a clinical distance, Zeller puts us inside Andre's mind. And it is not a comfortable place to be.

Our sense of what's real and what's fantasy becomes fractured almost from the start. Characters who may or may not be Andre's daughter, son-in-law or caretaker appear, vanish and take on different guises with disconcerting speed.

In one remarkable scene -- certainly the most jarring theatrical moment I've seen this season -- Andre's son-in-law (Christopher Evans) exits the room with a pair of grocery bags to prepare a chicken for dinner. Andre is perplexed when he doesn't return.

A moment later, his concerned daughter (Aleks Malejs) tells him that there is no man. There are no bags. There is no chicken.

The brilliance of Zeller's script, and especially that scene, is that we feel as confused and frightened as Andre because we experienced the same thing: We just saw the man with our own eyes, and now someone is telling us he doesn't exist.

At the heart of the production is an often thrilling and fully realized performance by David Lamb, who sets a baseline of charm for his character that makes his descent all the more painful to watch. Unshaven, in pajamas and a grey robe, Lamb maintains an air of confidence and ease even as his delusions mount.

He is positive his caretaker has stolen his watch, that his daughter is plotting to take over his flat, that he was once a tap-dancer. For the most part, save a few overly performative moments, Lamb renders his character's increasingly agitated confidence with honesty. The fear his character experiences in later scenes is utterly believable.

It helps that Lamb's scene partners are no slouches. Malejs is characteristically excellent as Andre's daughter Anne, simultaneously loving and exasperated. Evans and Adriano Gatto excel at the challenge of playing men who may or may not exist, doing things that may or may not be real. And Jenn Stafford and Kristen Bentley, sometimes as phantom daughters and sometimes as phantom caretakers, fill out the excellent cast with consummate skill.

Aging, as they say, is not for sissies. Nor is this play. But, at least in the second case, if you're brave and you can face it, you'll emerge from the experience stronger.

A "tragic farce" about a man's descent into dementia, runs through May 14 in the Kavinoky Theatre, 320 Porter Ave.