Dozens of volunteers in the village of Hamburg on Friday began building a $450,000 playground that will be more than your average swing set and slide.

The Hamburg Community Playground will be "a true destination playground," playground committee member Jennifer Gallardo predicted during the planning.

With five slides, swings, ring climber, spinner and a two-way zip line, tight rope bridge, fire pole and more, there should be something for every child when it's built.

Three large piles of stone and wood chips greeted volunteers as they gathered Friday at the site between Highland and Prospect avenues. Three more building days are scheduled: Saturday, May 5 and 6.

Months of fundraising, from chicken barbecue dinners to sales of aerial photos and pavers, to appeals to foundations and elected leaders for grants, preceded the start of construction. The fundraising got a major boost from state Assemblyman Sean M. Ryan, who secured a $220,000 state grant two years ago. 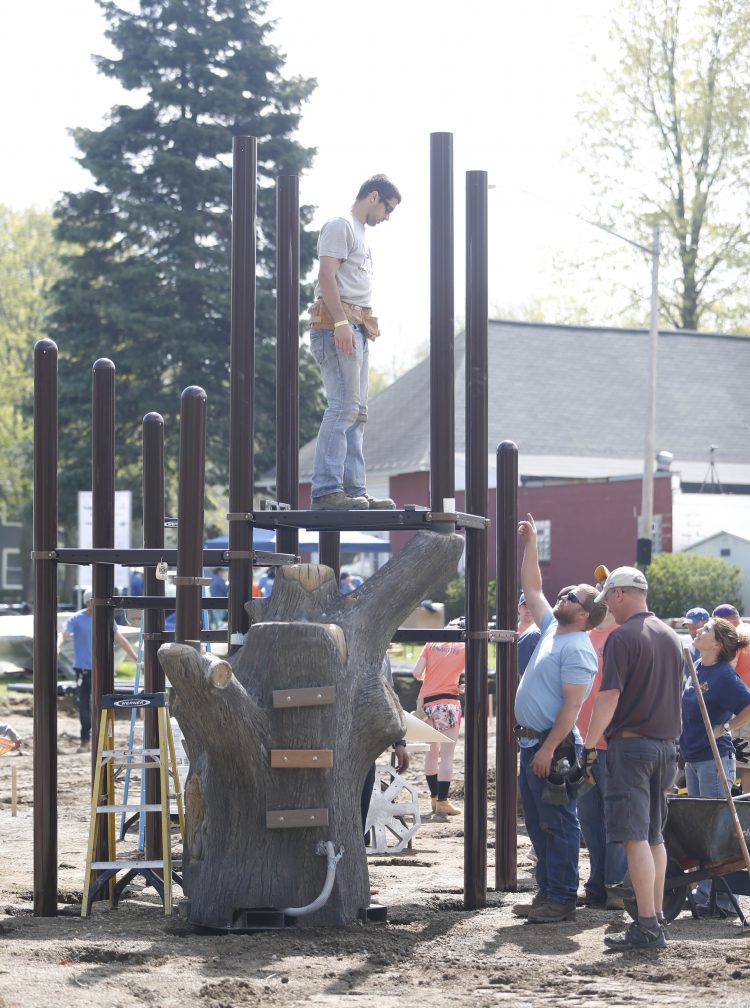 "This significant investment from New York State was a huge boost to the fundraising effort for a new playground in Hamburg. The former wooden playground served the Hamburg Community for 25 years, and it was time for a new modern playground that the children of Hamburg could enjoy for many years to come," Ryan said.

“Our playground project is not just another playground. The new play area will include a lot of accessible play pieces and will meet the needs of a variety of kids including those in wheelchairs to kids with autism. The space will also include many play components you can’t find at any other local playground," Gallardo said when it was being planned.

After the equipment has been installed, the playground will remain closed while concrete walkways, stone base and rubber safety surfacing are installed.Construction of the playground is expected to be completed by May 26.

"This project has shown us what an amazing community we live in – both Hamburg and Western New York – and we’re so excited to be able to share this amazing new playground with children and families from all over our area," said Laura Herman, volunteer chairwoman of the committee.