The end of a pet's life can be difficult for the animal and for its people.

But an innovative approach to those final months, weeks or even hours is easing the way for both people and their beloved cats and dogs. Lap of Love mobile veterinary hospice care has been offered in Western New York since 2014 by a longtime Lockport veterinarian.

Dr. Steven M. Schultz provides both home hospice care for dogs and cats with any terminal diagnosis, care that can go on for months, and gentle at-home euthanasia. And Schultz said the gratitude of the people whose pets he cares for eases the burden of what could be a depressing job.

"What we are doing is so much less stressful for the pets," said Schultz. "They're at home, they're relaxed, we're relieving their pain and suffering. People, especially the elders, are so appreciative that we come to their homes, they don't have to put their little cats in a carrier and haul them off to the vet, which is totally stressful, or try to get their big dogs into a car and get them to the vet because they can't walk anymore."

"End of life for our pets is a heartbreaking and extremely difficult time," said Robyn Eckhardt of Lockport, whose 17-year-old dog, Gemma, a Lab-border collie mix, has been Schultz's hospice patient for more than a year. "Dr. S. is the perfect vet for this. If we can help our pets go peacefully, without unnecessary stress on them – and you, which your pet can pick up on – it is better for everyone."

The concept of veterinary hospice, which involves providing pain relief and life-improving measures for pets, rather than surgery, chemotherapy or other drastic treatments, is relatively new.

"Years ago, the concept of the human-animal bond was quite different than it is today," said said Kathryn Jennings, executive director of the International Association of Animal Hospice and Palliative Care, a nonprofit that was founded nine years ago in Chicago. "Today, people are doing more for their pets when it comes to diagnosis and treatment. So when we're looking at end-of-life, people also want to have more services available."

Schultz dealt with many animal health issues that sometimes included serious illness and death at Countryside Veterinary Clinic in Lockport, which he operated for almost 30 years before selling the practice in 2012.

"By sheer coincidence," he said, he and his wife, Sara, who have three adult children, sold their house at the same time. "So I said, let's go out on the road," he said.

During their travels, including a stay in the Virgin Islands and Texas, Schultz learned about two young veterinarians in the Tampa area, Dani McVety and Mary Gardner, who had started a hospice and in-home euthanasia practice called Lap of Love. "I said, 'We could really use something like that in the Buffalo area,' " he said.

In 2014, after returning to Western New York, Schultz opened the local branch of Lap of Love, becoming the first in New York State to offer the group's specialized services.

Schultz began reaching out to other local veterinarians to inform them of his new specialty. "Because I've been in this area for so long, I know most of the veterinarians, so I got a lot of referrals," he said.

Lap of Love provides guidelines, Schultz said, "which are good for new or younger veterinarians," but as an experienced veterinarian he has his own time-tested care protocols.

Schultz's practice accepts two kinds of referrals, he said. The first is for dogs and cats that "have a terminal diagnosis of some sort, which could be cancer, heart disease, kidney failure – those types of things that aren't going to be cured, most likely," he said. These animals are generally older and their owners have decided not to pursue expensive surgeries, invasive tests or chemotherapy, he said. "That's where hospice takes over and we just try to keep them as comfortable as we can, as long as their quality of life is good."

Schultz usually receives a records transfer from the animal's regular veterinarian, as well as any specialists. Schultz also examines the animal and talks with the owner, then provides his opinion on what steps should be taken to preserve the pet's quality of life, and how to recognize when it is time to consider euthanasia.

"A lot of people wonder when is the right time to let go," he said. "We go through all the things that make up quality of life, we go through questions and answers. As long as their quality of life is pretty good, we'll keep going, but if it changes, we talk about peaceful euthanasia. How is their hydration, are they eating, are they able to keep themselves clean, how is their mobility, are they having more good days than bad days?"

More than 400 veterinary practitioners belong to the International Association of Animal Hospice and Palliative Care, said Jennings, although there are certainly more veterinarians providing mobile and hospice care. But membership "is on the rise, big time," she said.

"If a pet had a chronic illness, years ago, veterinarians might suggest euthanasia, but today we have many more options," she said. "Pet families are willing to do more for their pets, based on the fact that there is more availability in health care."

Depending on the pet's needs, Schultz may prescribe appropriate animal or human medication, as well as home-prepared food or prescription diets.

Anne Banas, of Clarence, has a unique perspective on end-of-life issues: She is a physician with Hospice Buffalo. "I’ve learned that knowing time is short can be a blessing," she said. "Death is a natural part of life, and it doesn’t always have to be a medical emergency. When we know that time is short, we can focus on making the best of the time we have, and we can plan for a good death."

In August, the Banas family was devastated by the death of feline Charlie, 16, who hid the symptoms of a lung tumor until it was a medical emergency. "It broke my heart that my 10-year-old daughter did not get the chance to say goodbye to her lifelong friend," said Banas.

The family's gray-and-brown-striped tiger cat, Daphne, is almost 15 and is living with either inflammatory bowel disease or lymphoma. "Pursuing diagnosis and treatment would not have changed her outcome in a way that justified the burden and distress," said Banas.

"Dr. Steve is exactly what we needed," said Banas. "He focuses solely on Daphne’s comfort and quality of life."

When Daphne first became ill, the family had to drive her to the vet for injections of anti-nausea medication and steroids, Banas said. "Dr. Steve has been able to offer us options to treat her symptoms at home, avoiding the distress of car rides," she said. "For now, she tolerates her medications well, and she seems to be quite happy."

Banas said, "We don’t know how much time we have left with Daphne, but we take comfort in knowing that, with Dr. Steve's help, we can keep her comfortable at home, and when it’s time, she can pass peacefully at home in our arms."

Another part of hospice care is emotional support for the grieving pet owner, who, unlike those who lose a human companion, may be belittled for an emotional reaction. "This has been a disenfranchised grief in our society, at the end of a pet's life and after the loss of a pet," said Jennings. "Part of the concept of hospice is not only care for the patient, but also the concept of being able to offer compassion and support for the family and what they're going through as well. And they want that." 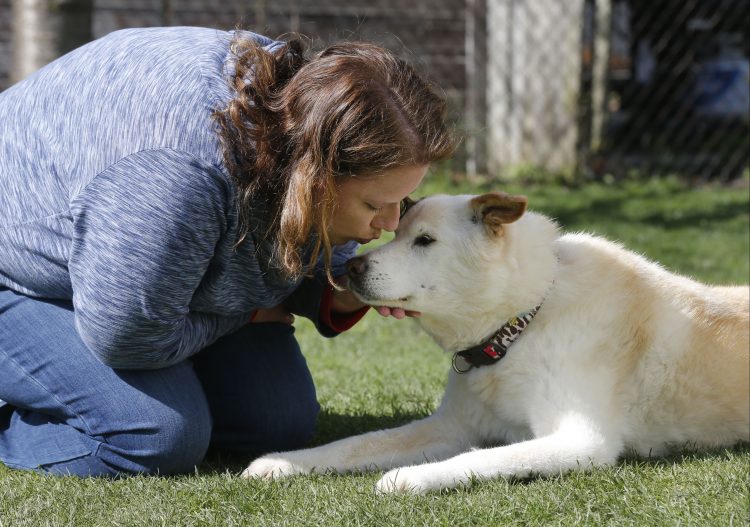 Robyn Eckhardt shares a moment with 17-year-old Gemma, who has seizures and is under the care of Dr. Steven Schultz through his Lap of Love practice. (Robert Kirkham/Buffalo News)

Eckhardt said Schultz "was my dogs' regular vet before he retired from his practice. I trust him implicitly." When she heard that his new practice was offering hospice care, she said, "I was extremely relieved and happy ... The thought of having to take Gemma, transport her to the vet's office and have her last life experience be of stress, fear and in a cold, clinical environment is not something I want for her. I want her to be home, where she's lived and been loved all her years."

About a year ago, Schultz visited the Buffalo home of Laurie Reagan to euthanize 13-year-old Chloe, a Lab-cattle dog mix who was suffering from lymphoma. "She had always been very nervous and stressed-out at the vet," said Reagan, "so I thought this would be a great alternative."

Although Chloe had not been in hospice care, Reagan knew the end was near. "I had to carry her in the final few days, I had to hand-feed her, I couldn't see her continuing through this process," said Reagan. "I called my own vet to see if they offered a house-call visit, and they said no, but there was a service locally."

The euthanasia visit was as peaceful as she had hoped, Reagan said. "It was amazing. He was very calm and quiet and I had set up a blanket, to make her comfortable."

Although saying goodbye to a beloved animal is difficult, Reagan said she was comforted by the visit. "He was so sympathetic and kind, and understanding and empathetic about an owner going through this," she said. "I would absolutely recommend this service, and I did, to a friend of mine in a similar situation. And I would do it again."

The euthanasia is a gentle two-step process that begins when Schultz sedates the pet deeply. Afterward, he said, "a lot of people like to make their own arrangements, which could mean a lot of things, from burying them in their backyards to taking them to the SPCA, to taking them themselves to one of the pet crematories," said Schultz. "If I take care of it for them, which does make it easier for the pet owner, I arrange for either a private cremation, which can be somewhat expensive, or a communal cremation, which can be less expensive. We use the same crematory services any veterinarian can offer."