The solid 6-foot-2-inch Roberson was an outdoorsman who led whitewater rafting trips down the Ocoee River in Tennessee. When he was not rafting, he worked his usual 50-hour week as a waiter at FoodWorks, a casual upscale restaurant in Chattanooga.

It was early April and it seemed his deteriorating vision – steadily worsening for 18 months – had gone into overdrive. He was told sunlight and its warmth caused the lenses on his eyes to get gray and somewhat hard. Roberson knew he needed help, but without insurance he could not even get an appointment with a doctor.

"Last month my left eye got worse," said Roberson, 46, the father of four, on Tuesday. "I don't see faces anymore. Everyone is faceless."

But then an Amherst ophthalmologist's foundation and a Cheektowaga surgeon stepped up to the plate and restored Roberson's vision. They did it for free, as a Buffalo News photographer and reporter watched.

Dr. Kenneth Anthone launched his nonprofit, Eyes on America, in the United States in 2009. Anthone and his team had just returned from an unsuccessful medical mission to Ecuador to perform cataract surgery on the country's underserved. But his surgical equipment was confiscated upon his arrival at the airport, said Karen Anthone, executive director.

"When we came back, we put out feelers in our own community and we performed 30 surgeries," said Karen Anthone. "Our patients were uninsured people, the working poor who did not qualify for medical insurance and who didn't have money for health insurance. We had waitresses get fired from a restaurant because they could not distinguish a 6 from an 8 on the cash register."

Each year since 2009, usually on a Saturday in October, Kenneth Anthone offered free cataract surgery to those who could not afford it.

"Last year we began accepting veterans and immigrants for cataract surgery," said Karen Anthone. "Nationally we are the only providers who accept out-of-state residents."

"I took my daughter in for dessert one night, and watched as he tried to pour a glass of wine," the Chattanooga woman said. "Dennis Roberson knew a lot of people, but not many knew his vision had gotten so bad."

As his vision decreased, Roberson had to adjust at work. He began to memorize the order screen the wait staff used at work. He counted steps into the dining room so he wouldn't miss one. He memorized the face of his smartphone so he could make calls.

Lambert used her laptop to search for "financial aid for cataract surgery no health insurance." At least seven sites popped onto her screen. She contacted all of the sites, but only one, Eyes on America, offered immediate help. 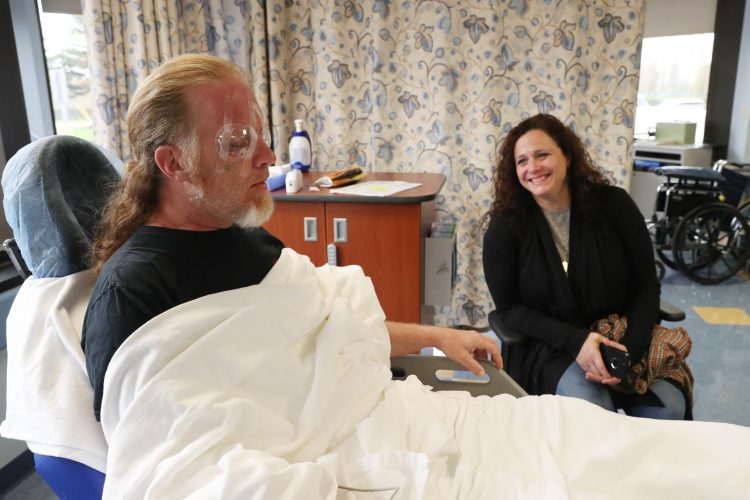 Dennis Roberson with his friend Jen Lambert, right, in a recovery room after the surgery. Roberson was already making jokes. (Sharon Cantillon/Buffalo News)

Roberson scraped together $300 for a doctor's visit to obtain a referral. Friends footed the bill for travel to Buffalo. The Anthones picked up the hotel tab for Roberson and Lambert.

Roberson's cataract surgery was to be performed free of charge by Dr. Ephraim Atwal, who in 2015, along with his father, Dr. Amar Atwal, joined the board of directors of Eyes on America. It was scheduled at Atwal Eye Care in Cheektowaga.

Hours before his surgery, with sandals peeking out from his hospital gown and a sleeve tattoo riding his right arm, Roberson joked around.

"Ask how much it cost," he said looking at his tattoo. "I gave (the tattoo artist) kayaks, paddles and a life vest. I am Scotch Irish, and this tattoo is Celtic."

The din of the operating room became a symphony of medical machinery soon after the procedure began. With two screens displaying the surgery as it was being performed, it appeared Roberson's eyeballs, magnified to the size of bowling balls on the screens, were overseeing the procedure.

Atwal towered over his patient. The thing about cataract surgery, the doctor explained, is that the patient must participate. Roberson's ability to follow instructions to move his eyes or keep them still is critical as Atwal peels off the cloudy lens and replaces it with a clear one. As Atwal unfolded the lens over the ball of an eye, Roberson began to move his right hand.

"Don't move that hand," Atwal cautioned. "If you move your hands and feet the eye usually follows." 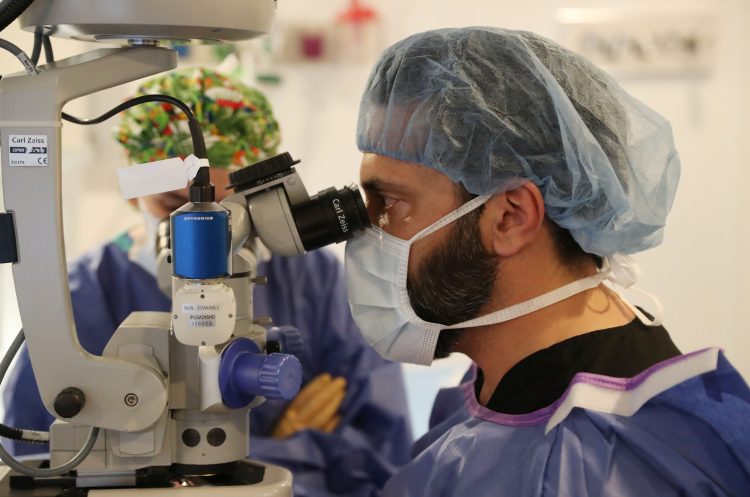 As he operated, the young doctor was shoeless, his socked feet positioned on a floor control pads, guiding the speed and direction of the surgical tools that touched Roberson's eye. Atwal's arms were braced to steady his hands as they held the instruments.

"I work with my left foot, and the right palm of my right foot," he said. "There's so many different buttons on the control that I like to feel it with the pads of my feet. It's not really great technique, because they say if anything is sharp is on the floor you'll hurt yourself."

The intensity with which the doctor worked was apparent in his relentless gaze. As he looked into the scope that magnified Roberson's eyes, the doctor's eyes did not blink. He sat with ergonomically correct posture.

"I'd feel it by my fourth case in if I did not sit straight," he said.

After 26 minutes, the surgery was complete. Two faulty cataracts had been replaced. The cataract in Roberson's left eye was so deteriorated that he had lost the ability to see out of it.

Roberson is asked how he felt.

"It feels like someone poked me in the eye," he said.

But he could see.