Plans to expand the Metro rail from the University at Buffalo South Campus in Buffalo to the North Campus in Amherst ran aground in the 1980s and 1990s in the face of stiff community opposition and a lack of funding.

Residents and officials who didn't support bringing the Metro rail into Amherst back then say they didn't want construction tearing up their neighborhoods and they doubted the extension's value. There was a perception then that the expanded line would bring crime from Buffalo to the suburbs, but residents today deny anti-city or racist views played a role in their opposition.

"It wasn’t discrimination, as much as ruining the neighborhood," said Ray Wedekindt, 74, the semi-retired former owner of the Harry A. Wedekindt Funeral Home in Eggertsville, who was involved in anti-expansion efforts.

Now, for the first time in several decades, government officials are again pushing to extend the region's Metro rail system from Buffalo into Amherst.

Some critics remain, but the organized opposition that sank the Metro expansion plans a generation ago hasn't developed. In fact, in another dramatic change, some business owners and community leaders are enthusiastically embracing the idea.

"It's something that has to happen. It's just a matter of when will it happen?" said Eric Balsom, the sales manager at Kenny Carpets, who favors putting a Metro rail station near his family's Sheridan Drive location to boost its name recognition.

Plan for Metro Rail extension to Amherst coming into focus

Starting about seven years ago, the Niagara Frontier Transportation Authority revived talk of expanding the 6.4-mile Metro rail, and an analysis found the extension connecting downtown Buffalo to UB's Amherst campus made the most sense. Earlier this year, Gov. Andrew M. Cuomo threw his support behind the plan, committing $5 million for an environmental review of the proposal.

The NFTA and Empire State Development tout the benefits to the town as more shoppers visit existing businesses and new companies add to the property tax base, all drawn by an expanded Metro rail.

Some skeptics question those projections. And it's not clear where all of the $1.2 billion estimated cost of the project would come from. Still, Metro rail expansion is as close as ever to getting the green light.

Why Amherst was opposed

Buffalo Niagara has a 6.4-mile light-rail system that runs in a straight line, entirely within the city limits, because the NFTA ran out of money as it was building the system in the 1970s and '80s.

The original plans called for a network that ran from the foot of Main Street downtown all the way to the UB North Campus. But initial cost estimates spiraled higher, and people who lived along the route near Canisius College objected to a proposed elevated rail line, forcing planners to dig a far more expensive tunnel. 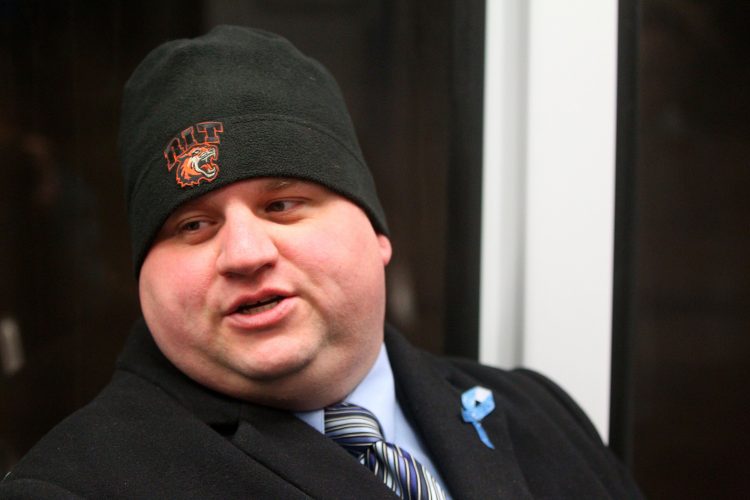 That raised the cost of the project to $530 million, and forced the NFTA to stop the Metro rail at UB's South Campus.

A Citizens Rapid Transit Committee supported extending the line into Amherst, which had an estimated price tag of $366 million at that time.

As a counterpoint, a group of Amherst residents started Citizens Against Rapid Transit, which met at a church in the town and had between 150 and 200 members at its peak, said William L. Kindel, a 20-year Town Board member who this year is seeking a return to the board. Kindel also was part of this anti-expansion fight.

Town residents were worried about having a Metro station built near them, he said. "Would you want that in front of your house?" Kindel asked.

"It was never a racial thing," Kindel said. "We never thought of that."

However, Barb Abel, treasurer of the Eggertsville Community Organization, who has worked on Bailey Avenue in the neighborhood for 35 years, said she does remember the concerns Amherst residents had over city riders taking the Metro into the town.

"Oh, definitely, big time. But now, with Walmart, we're getting them anyway on the buses," said Abel, referring to the Walmart Supercenter at 3290 Sheridan Drive that opened in 2011.

She said fears that a Metro expansion would drive up crime in the 1980s have been realized with the opening of the big-box retailer. "Issues with robberies and car break-ins and whatever at the Walmart," Abel said. 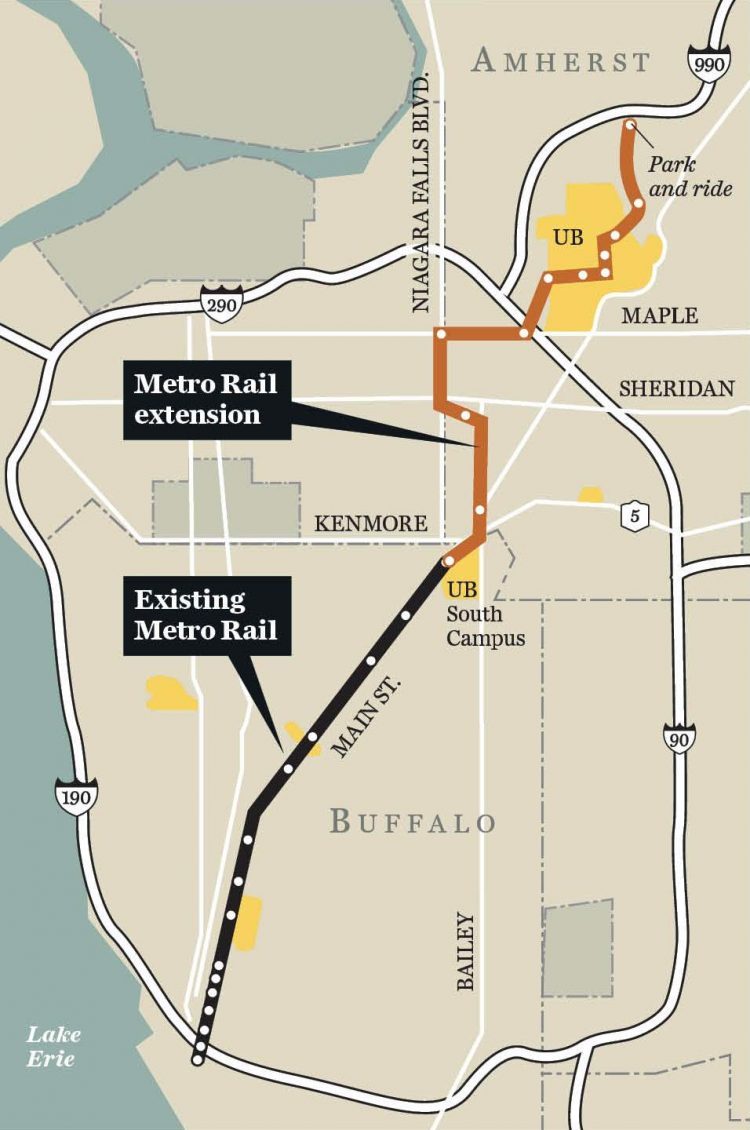 So why is the expansion coming back to life now?

NFTA officials revived the idea in 2011, saying rising gas prices at the time made wider use of light rail more attractive by comparison.

The agency settled on a rail-only Amherst extension as the most likely to win federal funding under the scoring system used by the federal government.

The agency and public transportation advocates saw it as the best chance to link the North Campus to the South Campus and – more importantly – to the burgeoning Buffalo Niagara Medical Campus downtown.

"In terms of both the quality of life for in excess of 20,000 students and faculty and others who are on that somewhat isolated campus and connecting them to the urban core, which right now is thriving more than it ever has in a generation or two, in the governor's mind made enormous sense," said Sam Hoyt, regional president of Empire State Development.

And attitudes have changed since 15 or 20 years ago, when opponents of Metro rail expansion "inundated" the Amherst Chamber of Commerce with phone calls and letters, said Colleen C. DiPirro, the chamber's president and CEO.

This time around, DiPirro said, "I've not gotten one negative phone call or outreach about the NFTA extension."

The proposed Amherst extension would leave the University Station at UB's South Campus and run underneath the campus and a portion of the Eggertsville neighborhood, primarily along Bailey Avenue. The rail line would move above ground somewhere near the former Northtown Plaza, and then head north on Niagara Falls Boulevard toward Maple Road.

It would take a right turn and head east on Maple before taking Sweet Home Road into the UB campus. The rail line would run through the heart of the campus before following John James Audubon Parkway past the campus and out to the Lockport Expressway, where the agency would build a park-and-ride station.

Preliminary plans include 11 stations along the route, most on the UB North Campus, with another at the corner of Maple and Niagara Falls Boulevard near the Boulevard Mall.

"The benefits obviously would be, in the short term and long term, the jobs and the development that takes place with these projects," said Jibreel Riley, an Eggertsville resident who started the Twitter account @AmherstMetro. "Unlike in the past, where you would have put something like this in Amherst, and you'd have seen a series of parking lots near the stations. Now you see transit-oriented development."

Will anyone ride it?

Some people who live along the proposed route express mixed feelings about it.

In Eggertsville, where the NFTA has held a number of meetings with residents, concerns abound over the disruptive effects of construction and Metro stations, wherever they are built. They still are urging the agency to run the line entirely along Niagara Falls Boulevard from the South Campus to Maple Road.

However, some neighbors say they are more open to the idea of a Metro rail extension because they know the technology for building tunnels has advanced from the traditional cut-and-cover method.

That doesn't mean Stephen W. Matisz Jr., the president of the Eggertsville residents' group, thinks people who live in Eggertsville will actually use the Metro rail. "Are you going to take it to Wegmans? I don't know," said Matisz, who works as a supervising fire dispatcher for Town of Amherst. "How do you take your groceries home?" 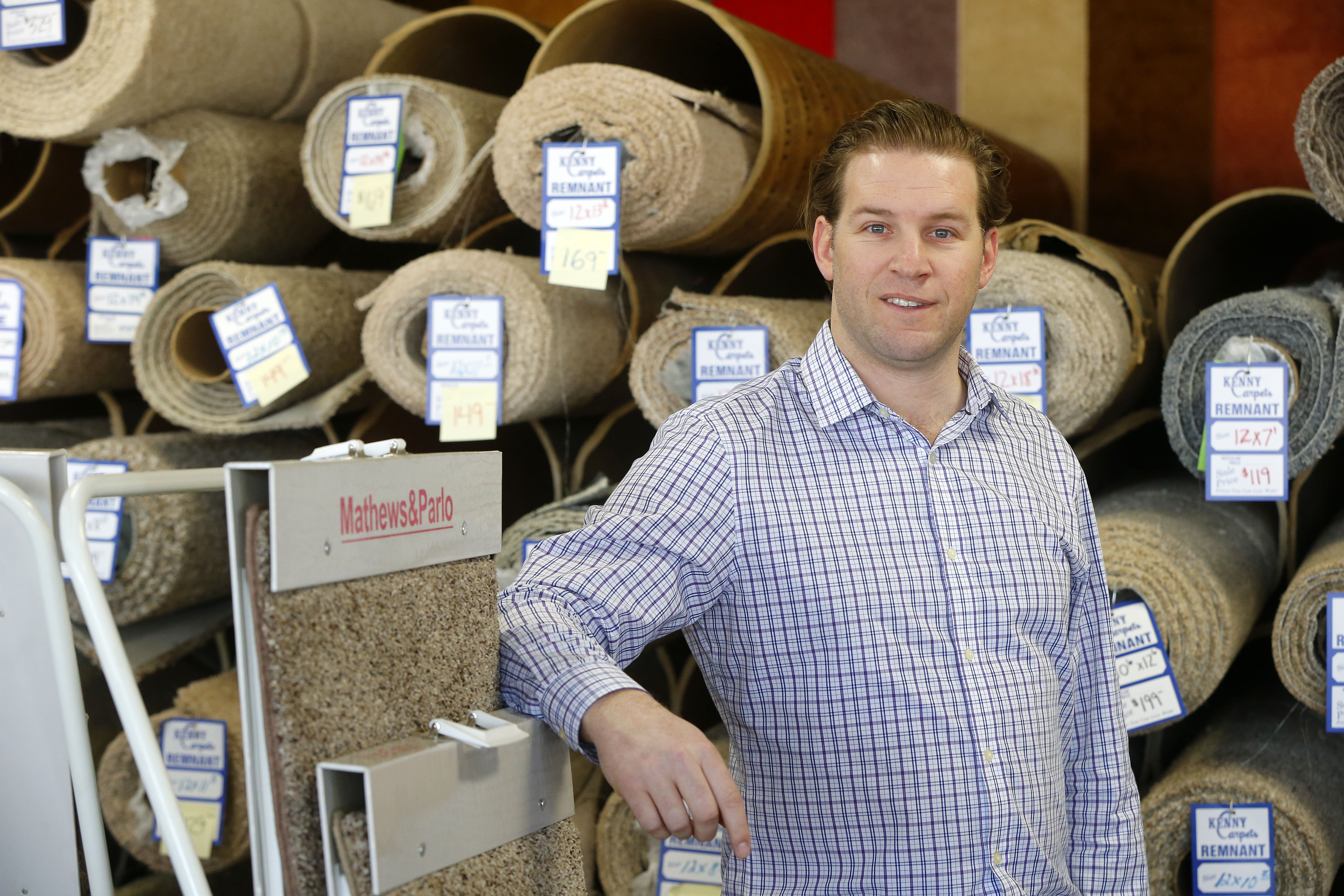 "It's something that has to happen. It's just a matter of when will it happen?" said Eric Balsom, sales manager at Kenny Carpets, who favors putting a Metro rail station near his family's Sheridan Drive location. (Mark Mulville/Buffalo News)

Some owners and managers of small businesses along the proposed Metro route see its potential.

Balsom is a member of the third generation of the family that has owned Kenny Carpets, which has three locations including the one on Sheridan Drive. He said older residents may not support the extended rail line, but younger people who seek alternatives to driving, such as ride-hailing, would.

Scott Henderson is the assistant manager of the Amherst Feel-Rite Fresh Markets, one of five locations in the locally owned chain that sells herbs, vitamins, natural foods and organic produce. He said the UB students who work in and shop at the store would benefit from the new line, even if he questions whether it makes financial sense to build the extension.

"Obviously the students are going to be the bread and butter. And is that going to be enough?" Henderson said. "I think most people who have been in Buffalo for any length of time just drive down to the city."

People who regularly commute on the Metro rail welcomed the proposed expansion.

Tom Naeger, an IT specialist for a downtown law firm, was riding the Metro inbound on a recent weekday morning. The Town of Tonawanda resident said he takes the train five days a week, leaving his car at either the University or LaSalle Park-N-Ride stations, and getting off at Fountain Plaza. He said the Metro saves him maybe $10 or $15 per month in gas and parking.

He said he wouldn't mind being able to drive to a station that's even closer to his home if the extension is built.

"That would be nice for me," Naeger said.

Who will pay for expansion?

Whether the Metro rail comes to pass, of course, once again will come down to money: How much will it cost and who will pay for it?

President Trump's proposed budget contains no provision for the Federal Transit Administration’s “New Starts” program, and that presents a serious setback to the region's effort to obtain federal funding for the Amherst extension, Sen. Charles E. Schumer announced in March.

The governor's office projects the extension would cost $1.2 billion, with the federal government contributing $600 million and the state and local governments picking up the other half of the cost.

The state projects developers would build 8.4 million square feet of commercial and residential space directly linked to the Metro rail expansion with an assessed value of $1.7 billion, while existing properties would see their assessed values rise by $310 million. Together, Buffalo and Amherst would collect $61.5 million in additional property tax revenue annually if the rail extension is built, according to the state. The retail development tied to the project would generate millions more in sales tax revenue, as well, the governor's office predicts.

But not everyone is convinced. 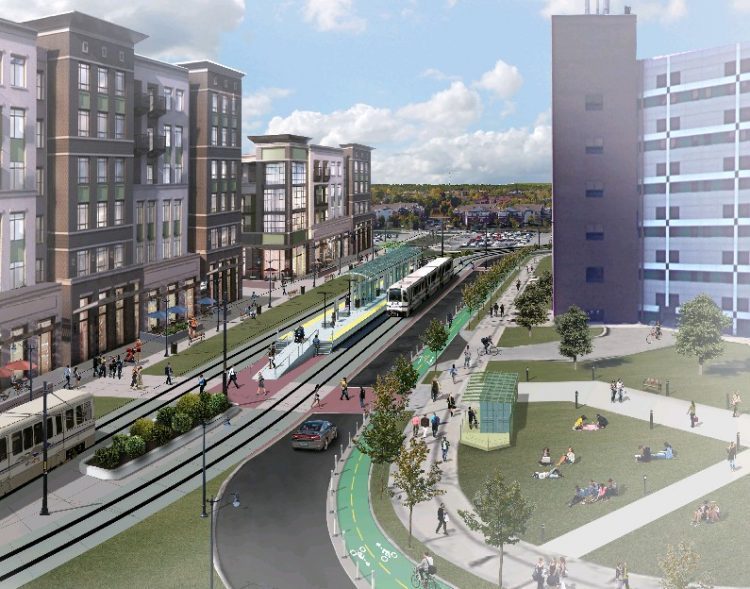 A rendering of plans for the Metro Rail station at the University at Buffalo's North Campus in Amherst, part of the proposal to add 6.5 miles to the line, for a total of just under 13 miles.