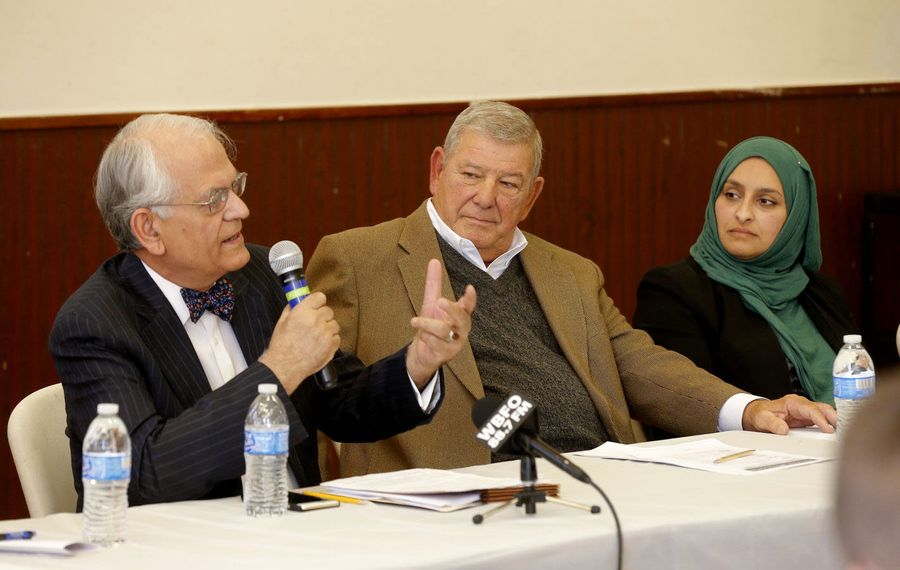 How the media covers the Muslim community and how the public interprets that news was the focus of a wide-ranging "Muslimedia" panel discussion Sunday in the Islamic Center, Getzville.

The crowd of about 60 people obtained insights from two retired Western New York journalists as well as religious leaders and representatives of the Muslim community.

Lee Coppola, a print, TV reporter and longtime dean of St. Bonaventure University's journalism school, praised journalists' work in covering the Trump administration but said there is room for improvement when it comes to reporting on Islam, and reporters have not "done an adequate job."

"Have journalists done a good job reporting on Islam?" he asked. "No. And that's simply because I think that when news happens, it's the news that attracts attention – the violence, for instance, the crime for instance, and not the good deeds ... I think journalism needs to do a better job at that."

As a journalism teacher, he said, he would look at a classroom full of "white-faced, generally from suburban America" students and tell them: "If you were a reporter and you had to cover an issue involving a Muslim or a black person or an Asian, do you know anything about those people? ... It's your job to find out about people who are foreign to you. "

Rich Kellman, a 40-year broadcast journalist and TV news anchor, recounted that when 9/11 broke, he went to Lackawanna the next day to talk with the Muslim community.

"I thought, they must be terrified. Most people hid in their houses and didn't want to be exposed," he said. "They didn't know how to feel."

Kellman said he found out that Lackawanna's Muslims were "just like you and me."

They were angry as hell," he said. "I don't think it was phony."

Both Kellman and Coppola concurred that it is a journalist's job to cover a community – "not to just scratch the surface."

Rabbi Jonathan Freirich of Temple Beth Zion added that the news consumer also has a responsibility.

"In our specifically American context," he added, "many people who are in the media encounter Jewish people and encounter the diversity of Judaism. So Jews don't look or sound the same to most of the people who are making American news, whereas Islam gets a treatment that is unfairly monolithic."

"When we look at the American media, we want black and white, we want pro and con. We want things that are simple," he said.

"And to identify culture of religion with people of a billion individuals plus, as simple, is problematic," he said.

Gamileh Jamil, who serves on the Erie County Commission on the Status of Women, is keenly aware of the fear factor.

"We see that with students and health care professionals," she said. "As soon as they invite you into their home, then you know that they love you. That misconception and fear is very real."

Dr. Khalid J. Qazi, founding president and senior adviser of the Muslim Public Affairs Council of Western New York, said change is slow, "but it is critical to change one person at a time," he said.