Those with Type 2 diabetes may soon want to add a new name to their list of iPhone helpers.

Move over Alexa. Zip it, Siri.

Independent Health is involved in a pilot program designed to help the makers of the Brook Inc. app bring it to a broader audience in the coming months.

"This is the beginning of a significant transformation,” said Dr. Michael Cropp, president and CEO of the Western New York health insurer. “While we're starting with diabetes, this can one day be helpful for other diseases, as well."

The free app allows those who use it to tell Brook about their daily blood sugar levels, meals, medication use and exercise. They also can connect Brook technology to fitness trackers and other devices so the app can provide insight into which behaviors are working to keep glucose levels in line, or what needs to be tweaked.

App users also can talk directly or through a chat forum to other users to gain insight into how to better manage their diabetes. 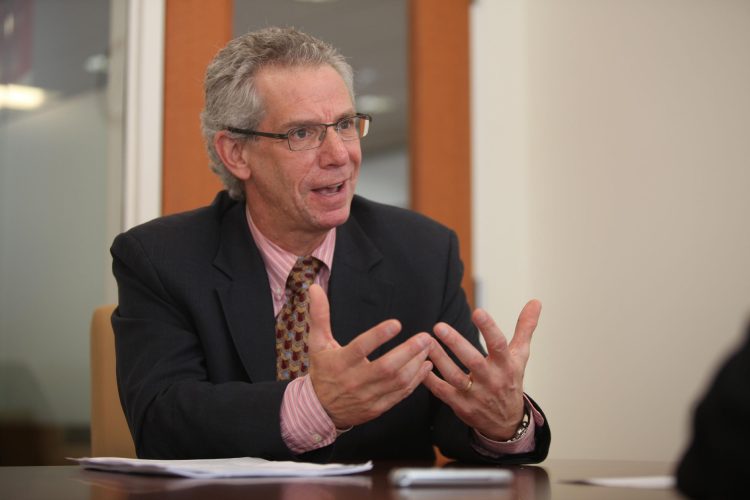 “Within the next half a year, they're going to identify a business model around it and determine whether it's something to sell through the app store or whether they should go through health plans and health systems" Dr. Michael Cropp, president and CEO of Independent Health, says about the new Brook app. (Buffalo News file photo)

"So many elements of your life can impact diabetes,” Cropp said. “If you sleep poorly, if you don't do a regular exercise routine, if you eat the wrong balance of foods.”

Cropp said he was attracted to the app because it uses an artificial intelligence engine that collects global information, boasts a rich scientific knowledge about diabetes, and can marry the two to provide keen insight for individual users.

“It was designed to interact with you through a conversational user interface,” he said. “It's very attractive and easy to use. You don't have to go through multi functions, multiple screens. It's right there with you.

"Somebody in the middle of the morning, whose blood sugar has taken a nosedive and feels really awful, can get on Brook and describe what happened. Brook may already know that they slept poorly the night before because the iPhone already told it that. Brook might know that they already did their exercise, then might ask – ‘What did you have for breakfast?’ – and be able to come in with some advice at the moment."

Brook CEO Oren Nissim was former chief of Israel-based Telmap, and director and general manager of mobile and location services for Intel Corp. before launching his new company in 2015. The goal: create a wellness platform to help those with chronic diseases better manage them.

The Seattle-based company chose diabetes first and started testing the app with help from several health care systems in the Pacific Northwest. A mutual friend of Cropp and Nissim connected the two by Skype last year and Cropp agreed that Independent Health also would launch the technology.

The app currently is only available on iPhones, though an Android app is in the works, Cropp said.

"We're helping them broaden their base to understand how the app is best used,” Cropp said. “Within the next half a year, they're going to identify a business model around it and determine whether it's something to sell through the app store or whether they should go through health plans and health systems."

Independent Health has targeted members of its commercial health plans who have Type 2 diabetes and are between the ages 18 and 65. The insurer looks to expand into its Medicare and Medicaid plans as they learn more about Brook. Those interested should call Member Services at 716-631-8701 or 800-501-3439, and ask for an individualized access code to use the app.

Dozens already have signed on. The goal is to get 400 members in the pilot program to capture enough experience.

"People love it,” Cropp said. “Having the requisite knowledge at your fingertips, when you want it, when you need it, is unique when you think about how health care has been structured around the provider with schedules and availability. This turns that upside down."