PERRY – The crowd at a monthly food pantry in this Wyoming County town of about 4,500 turned out to be a perfect microcosm of the most pro-Trump county in New York, where 72 percent of voters pulled the lever for the rebellious Republican candidate for president.

Waiting to gather their food from a nonprofit that might have to shut down if President Trump's budget becomes law, seven out of 10 people interviewed last week said Trump was still their man, their president, no matter what his budget says.

"I'd vote for him again 20 more times if I could," said Hal McWilliams, 59, a self-employed contractor from Portageville. "Build the wall! ...Democrats do everything in their power to destroy this country. Hillary Clinton was everything I am against. She was out to destroy the culture that made this country: Hard work, guns, freedom."

Voters talk like that in every corner of this county of rolling farmland just east of East Aurora, where the 40,000 human residents are, according to federal statistics, outnumbered by the cows by a margin of about 2 1/2 to 1.

You will hear some strikingly different comments, though, from the people who run that food bank, from some of the county's 16 town supervisors – all Republicans –  and from some of the farmers who tend to those cows. 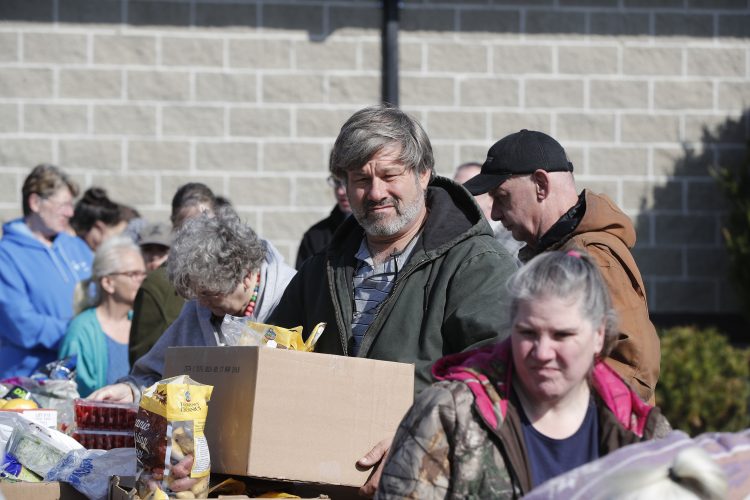 Hal McWilliams selects some produce at the Cornerstone Balus Center for Community Action in Perry on Thursday, April 13, 2017. "I'd vote for (Trump) again 20 more times if I could," McWilliams said. (Mark Mulville/Buffalo News)

Many of them speak of Trump's actions as president with varying measures of concern, none more so than Connie Kramer, executive director of Community Action for Wyoming County. The nonprofit, which runs that monthly food bank, projects it would lose about 90 percent of its funding if Congress were to approve Trump's proposed budget.

"That is our core funding, and that definitely would cause us to look at the viability of the agency and whether it could continue," Kramer said.

Praise for the president

Community Action runs a host of programs, from job training to rental assistance to housing weatherization, all funded by the Community Services Block Grant and other federal programs that Trump wants to eliminate or dramatically cut.

That seemed to be of little concern to most of the people packing their pickups with fresh produce and other items at last week's food bank.

Told that the food bank was in danger, McWilliams shrugged and said: "I grow most of my own food anyway."

Meantime, Reggie Clark, a 51-year-old chef from Castile, said he thinks Trump will back off from his budget cuts, which is possible, given that members of Congress oppose many of them.

What matters more to Clark is what he sees from the new president day in and day out.

"He's about action," said Clark, who didn't vote for Trump but said he would do so if he could vote again now. "I believe he's doing pretty much everything he promised to do."

That's what Keith and Bobbi Muhlenbeck think, too.

"We love him," said Keith Muhlenbeck, 46. "We support him in everything he's doing. He's a businessman who knows how to get things done, and you can tell he has America's best interests at heart."

Washington pundits might be criticizing Trump for his recent reversals on a number of policy issues, including trade with China and the future of the Export-Import Bank. But Bobbi Muhlenbeck sees the president as a tough talker who stands his ground.

Syrian dictator Bashir al-Assad found that out the hard way, her husband noted, citing Trump's decision to bomb a Syrian air base to retaliate for Assad's use of chemical weapons on his own people.

"This country used to stand for something, and now we're a joke," he said, arguing that former President Barack Obama projected weakness – something Trump obviously doesn't do.

"There's iron in the glove now," he said.

As for Trump's proposed budget cuts, Muhlenbeck doesn't worry that the food bank his family depends on will be forced to shut down.

"I'm sure they'll find the money somewhere," he said.

The Muhlenbecks, who live on government disability payments due to assorted ailments and injuries, were among about 200 people who lined up in a parking lot outside the Cornerstone Outreach Center for free groceries last week.

The line at the food bank should come as no surprise, given the state of the Wyoming County economy. Heavily dependent on agriculture, the local job market swings with the seasons. The unemployment rate sank to a mere 4.3 percent last August, but then shot up to 7.7 percent in February.

Beyond the farms, the county lost a quarter of its manufacturing jobs over the past decade, and locals complain that young people continue to move away in pursuit of the jobs they can't find here. The Census Bureau estimates that the county has lost 3.3 percent of its population in this decade alone, continuing a 20-year trend that has seen the county shrink by 7.2 percent.

In other words, Wyoming County is much like the struggling rural counties of Pennsylvania, Ohio, Michigan and Wisconsin that made Trump president.

While Wyoming County has long been heavily Republican, Trump exceeded the vote total of the 2012 GOP presidential nominee, Mitt Romney, by 8 percentage points here, as voters embraced his promise of bringing back jobs that had disappeared. 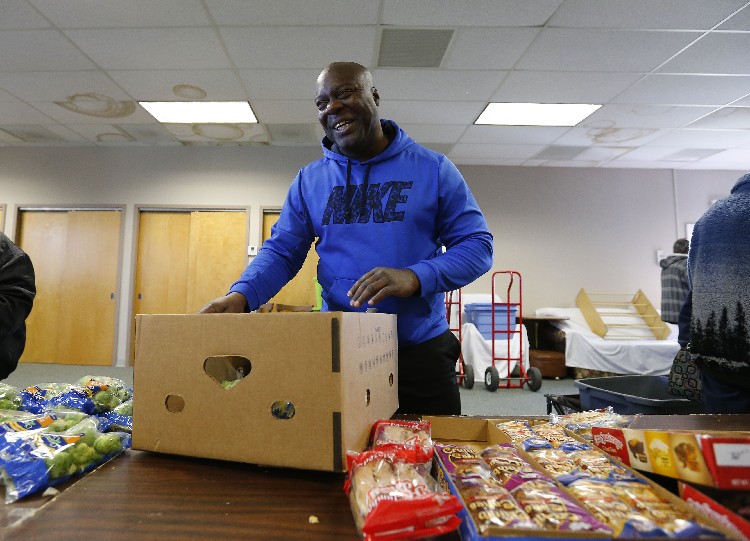 Reggie Clark, looking over the free groceries at a Wyoming County food pantry, didn't vote for President Trump but would now because 'he's about action.' (Mark Mulville/Buffalo News)

Locals – especially farmers – came to see Democrats as job-killers, several Wyoming county residents said last week. Farmers in particular pointed to an Obama-era regulation that expanded Clean Water Act protections to small wetlands and streams, a move that could have limited how farmers use the ponds and creeks on their own property.

"When you talk about why Trump did so well here, it's things like that," said Daniel Leuer, supervisor of the Town of Middlebury.

Trump quickly moved to repeal that Clean Water rule, and it's those sorts of moves that make him popular here, said Rep. Chris Collins, R-Clarence, whose district includes Wyoming County.

"These folks don't like government," said Collins, a strong Trump supporter who himself fought that Clean Water rule for years.

Quietly, on local matters, Collins stands up to Trump

Besides, people in Wyoming County could relate to Trump far better than they could Clinton, his Democratic opponent, said Tom Marquart of Marquart Brothers Farming, a dairy and produce farm in Gainesville.

"Hillary and Trump, they live in a different world, but at least he knows what the other world is," said Marquart, who thinks Trump inherited "a big mess" and is doing his best to clean it up.

Despite Trump's anti-immigrant rhetoric, even some of the Bhutanese refugees who work as farm laborers here voted for Trump, said Pat Standish, founder of Angel Action, a Community Action effort that enlists volunteers to work on everything from early childhood education to emergency help for families in need.

"One of them told me that Trump loved the country more than his party," Standish said.

Now, though, the reality of the Trump presidency is starting to shake some Wyoming County community leaders.

"We're just hanging by a thread here," A.D. Berwanger, supervisor of the Town of Arcade and the chairman of the county Board of Supervisors, said of the local hospital in Warsaw.

Meantime, Supervisor James R. Brick of the Town of Perry noted that his town and others could benefit from federal funding to expand their water systems. That's something that could be included in the billion-dollar infrastructure bill Trump promised but hasn't delivered.

Trump has, however, moved forward with plans to build a wall at the Mexican border. That could be troublesome, said Leuer, the Middlebury supervisor, because Mexico is a huge trading partner that buys dairy products from Wyoming County.

That's just one reason some local farmers are starting to worry a bit about some of Trump's policies.

Pat McCormick, a Wyoming County farmer who serves as a top official with the New York Farm Bureau, said farm labor shortages – a growing problem for several years – could grow worse because of Trump's crackdown on undocumented immigrant workers. He also worries that Trump's Department of Agriculture is not fully staffed and not prepared to deal with a Canadian government action that's limiting the shipping of milk north of the border.

"I don't agree with everything he's done," McCormick said of the new president.

Then there's the matter of Trump's budget cuts, which would cost 5,302 families in the county their home heating aid while probably shuttering Community Action, a nonprofit that essentially serves as an adjunct to the county Department of Social Services.

"Community Action is a key human services agency for us," said Ellen Grant, supervisor of the Town of Bennington. "If they don't have the funds to continue to operate, a lot of the services are going to fall back on our Social Services office."

"Trump is a go-getter"

Those realities seemed not to matter much to the Trump supporters at last Thursday's food bank.

Frances Daley, 90, of Castile, said she doesn't agree with some of Trump's budget cuts. But she quickly added: "I think he's doing a good job. He's more down to earth and speaks to the people. The Congress needs to cooperate with him more."

A middle-aged woman, who identified herself only as Sherri, agreed that Trump is doing well – despite the roasting he's taken in the mainstream media for the failed attempt to repeal Obamacare, the palace intrigue inside the White House and a continuing stream of controversial tweets.

A resident of Java, Sherri complained that the Obama administration fought her effort to get Social Security disability payments and otherwise produced a stagnant economy all across the nation.

Not everyone in line at the food pantry agreed.

"I think he's going to ruin the country," said Carol Green, 53, a Clinton voter from Warsaw who worried that Trump sets a poor example for young people.

Yvonne Barnhardt of Silver Springs, who was collecting groceries for her 87-year-old mother, was fully aware of Trump's budget cuts.

"He's taking away stuff we might need," said Barnhardt, 55.

Barnhardt didn't do anything to stand in the way of a Trump presidency, though.

She's not registered to vote.

"I never thought about it," she said as people in front of her in the line snagged their free groceries.