They sawed, bent, clamped and hammered planks for months – building something that hasn't been built in Buffalo in at least 170 years.

The Erie Canal has a new cargo boat.

"I think the most challenging part was, a boat isn't square," Marc Frys of North Tonawanda said. "You can bend (the planks) some, but it's not the easiest thing. It's a lot of clamping, a lot of physical labor."

The builders faced a few other challenges, too.

And they didn't have plans or blueprints to follow.

But they accomplished their mission to build a replica of a "Durham boat" – the type of flat-bottomed cargo craft used on the canal nearly two centuries ago. 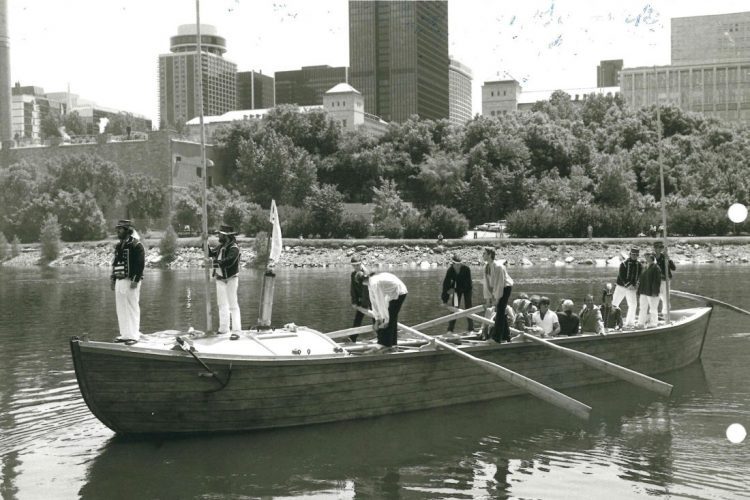 A Durham boat, similar to the one pictured, is to be used to demonstrate the original Lockport locks in 2017. (Courtesy Buffalo Maritime Center)

Staining the wood and checking for leaks remain as the last tasks before the Erie Traveler – the name given the 9-ton boat – is taken to Lockport and placed in the locks for a dedication ceremony May 13.

The Erie Traveler fills a need for the Lockport Locks Heritage Corp., which has long sought a boat of its own that can be used to show tourists how the old locks worked. The agency commissioned the Buffalo Maritime Center on Arthur Street in Black Rock to build the boat.

"We think it's historically an important boat to have," said Roger Allen, retired executive director of the Maritime Center. "This is the only known replica."

The last one, built in Canada, was scrapped in 2006, Allen said.

Volunteers were needed because there wasn't nearly enough money to hire a commercial firm. That probably would have cost between $500,000 and $1 million,  Allen said.

"They really had no other option," said Chris Andrle, the volunteer foreman for the project.

How to build a canal boat

The Erie Traveler's bottom is 42 feet long, but counting the protruding bow and stern, the boat stretches 51.5 feet. It is 7 feet wide.

Yellow pine is not altogether historically accurate. Two hundred years ago, "they used whatever they had, but mostly they would have used oak for the frames and pine for the planking," Andrle said.

The lumber came in the form of 16-foot-long 2-by-12s. They chose the best eight planks for the bottom of the boat.

"They have the fewest knots and defects," Andrle explained. "We're only worried about water getting in the bottom nine or 10 inches of the boat. We'll never have a heavy cargo, so the planks up above don't have to keep water out."

They had to be clamped in the middle and on each end to keep them from warping as they were planed down from two inches thick to one inch thick.

During October, some of the crew assembled the keel, or floor of the boat, while others constructed a wheeled cart on which the boat could be placed after the keel was done.

It wasn't until Nov. 28 that the keel could be flipped over and placed on the cart, with the help of a crew from Higgins Erectors & Haulers.

The frames of the sides and the interior were built next. That took a month, and in the first week of January the volunteers began nailing planks for the sides into place. 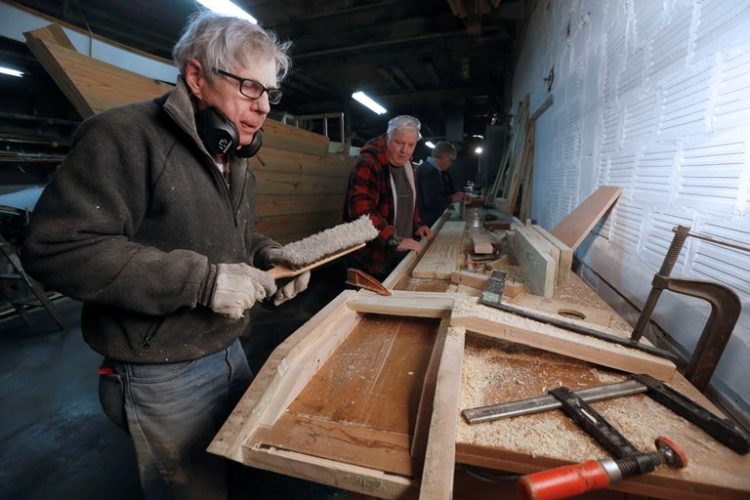 By early February, the six courses of side planking were in place on part of the boat. Mike Banks of Youngstown spent much of a day at the table saw around that time, cutting "scarfs" at an angle across the boards so they would fit better.

"You're working with your hands and then you get to see the finished product. It's really very satisfying," Banks said at the time.

His friend, Dan Breed of Youngstown, used a plane to bevel, or shape, the boards.

"I've been around wooden boats my whole life. That was my father's hobby, redoing old Chris Crafts, so it seemed like something fun to help out with," Breed said. "To see something like this come together, it makes me feel like I might take on one of my own someday."

The roar of the power saw was constant during the four-hour work shifts, as the volunteers cut the boards to size and then passed them to those climbing the ladder into the boat to install them.

"Whatever they ask me to do, I try to do it," said the Rev. Grant Appell, pastor of the Delevan Baptist Church, brandishing a hammer.

There was a little less clamping and sawing by late February, when much of the assembly work was complete.

Some of the crew, such as Carol Schmidt of Amherst, started sanding the wood to get it ready for staining.

"I come with a limited skill set, but I'm learning," said Schmidt, who said she has renovated two houses but wanted to learn more skills. 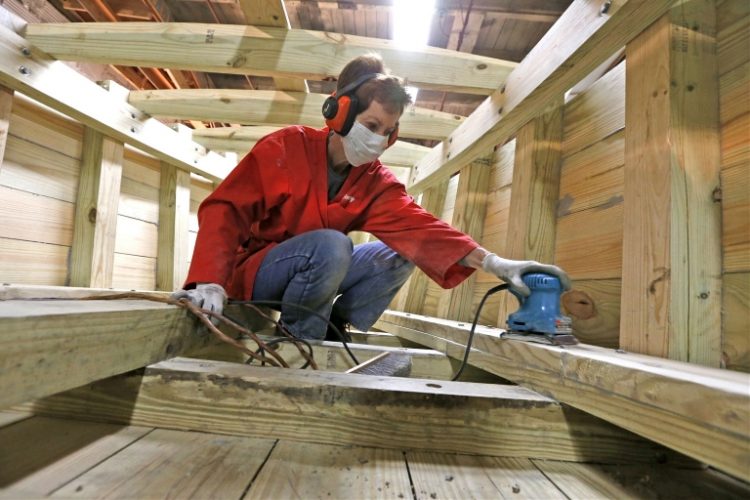 Other volunteers include Maritime Center regulars or people who heard about the project and wanted to get involved in building an old-fashioned wooden boat.

"A lot of them didn't have any woodworking experience, but it's been interesting to see some of the earlier ones, who didn't know anything, now are teaching the more recent volunteers," Andrle said. "I've seen some of those skills being picked up and passed on, which is what the Maritime Center really is all about."

"Once you do it, once you cut that first board or run in that first lag bolt, you're an expert," laughed Kent Iggulden of Hamburg.

With no blueprints or plans available, the crew worked largely from drawings and photos in old books, as well as Allen's knowledge of old-fashioned boats.

"Roger Allen is a professional boat builder. He's one of the top boat builders in the country," Andrle said.

"Luckily, we had some really talented volunteers and they just got it, picked it right up and understood the geometry of it after a simple explanation," Allen said. "We really did get a great bunch of volunteers, really some knowledgeable people."

"Traditionally there was one boat builder in the crew and everybody else who worked on it was a barn builder or a house builder," Allen said. "The boat is a funny conundrum. Some of it is very simple construction that a barn builder would get, but some of the bits are actually quite complicated." 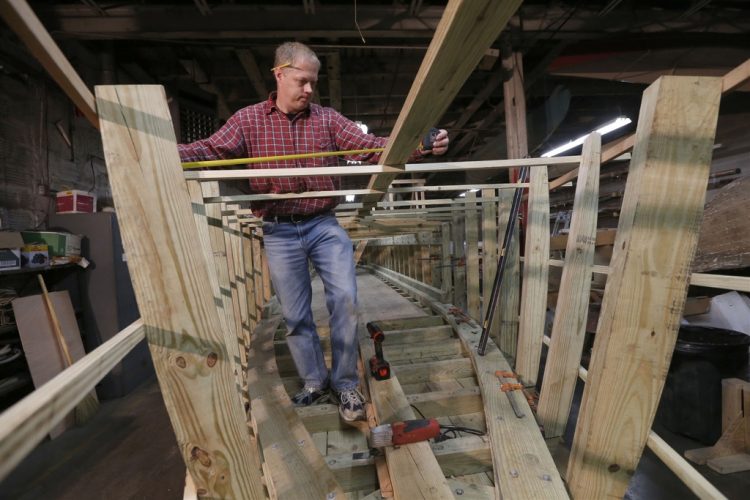 Volunteer Rev. Grant Appell of Delevan works on a cross piece plank support of the 42 foot replica Erie Canal cargo boat that is being built at the Buffalo Maritime Center on Arthur Street in Buffalo. (Robert Kirkham/Buffalo News)

The final push started in late March, with the spaces between the boards caulked with cotton and oakum, a traditional material made from tree bark. Then the staining began. The color will start out as a light wood tone, but that won't last forever.

"In historical accounts, these boats were usually said to be black," Andrle said. "People have assumed they were painted black, but we don't think so. We're using a traditional preservative, a mixture of linseed oil, turpentine and pine tar, which actually turns black if it's left alone. Initially, it'll just darken the wood, but eventually it'll turn black."

Staining isn't all that needs to be completed.

"We have to fill the boat with water to see if there are any leaks," volunteer Clint Starke, of Lockport, said.

"All wooden boats leak, but this one will have a battery-operated sump pump under the deck at each end. When we put it in the water, anything that comes in should be pumped right out," Andrle said.

The Erie Traveler will be launched in Buffalo Harbor sometime during the week of April 24, said David R. Kinyon, president of the Lockport Locks Heritage Corp. On May 4, it will be hauled by truck to Lockport, and a crane will place it in Lock 69, one of the five original locks, either that day or the next. The dedication ceremony will be held May 13. 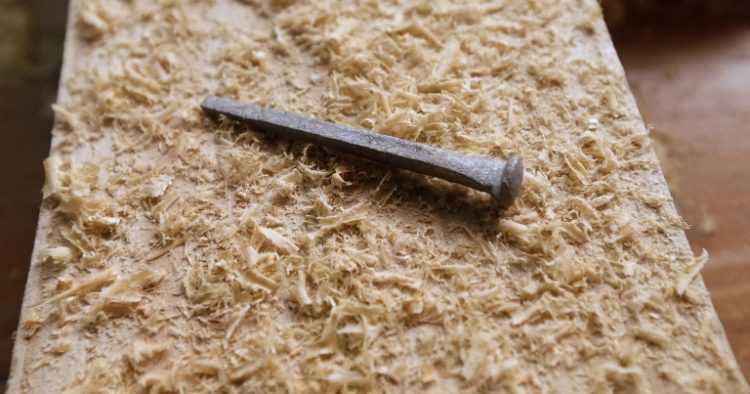 But before any of that happens, another long-defunct tradition must be renewed.

A bottle of Jameson's Irish Whiskey has been on a workbench at the Maritime Center for weeks. It will be shared among the workers and Lockport dignitaries Tuesday at a "whiskey party," a tradition among the canal boat builders of the 19th century.

When the last plank - the "whiskey plank" - was nailed into place, the builders started drinking.

A plank at the top of the Erie Traveler has been left unnailed, for completion at the celebration. It's believed to be the first whiskey party since the Black Rock shipyard closed in 1844.

Workers likely will autograph the inside of the plank before it's nailed into place.