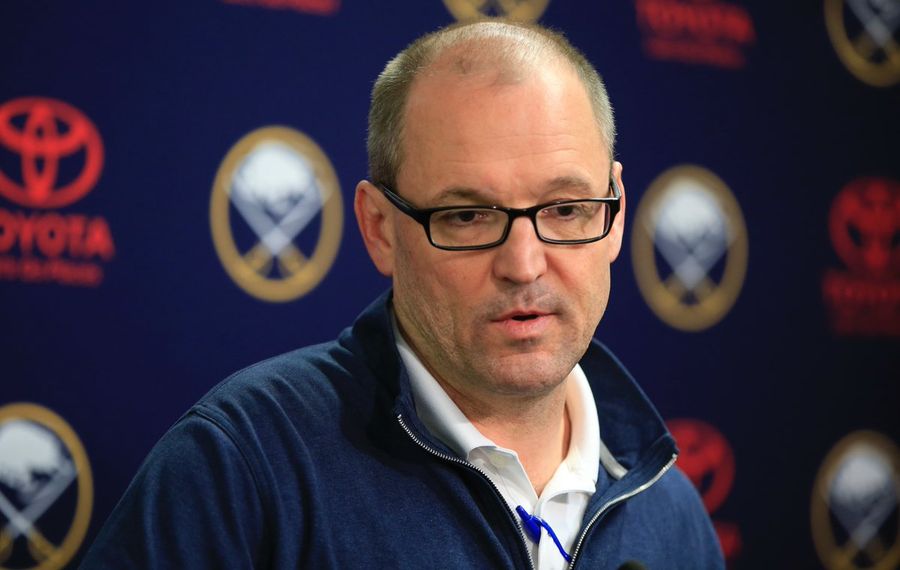 NHL teams move fast in this area. Old friend Lindy Ruff got turfed Sunday in Dallas. Willie Desjardins (Vancouver) and two-time Stanley Cup champion Darryl Sutter (Los Angeles) got the boot Monday. Tim Murray is speaking on Wednesday, so it seems unlikely the team would let Bylsma take lots of bullets the day after the season and then say see ya two days later.

Monday was all about reading tea leaves as the Sabres had their final say at all that's happened here since October. Bylsma stuck his chin out, took the blows and pondered the future. Evander Kane said the team needed more swagger, Josh Gorges talked maturity, Robin Lehner talked consistency.

Jack Eichel was downright churlish at times, providing curt answers to many questions. That's how Eichel rolls when he loses, and it's actually something this team could use a lot more of.

But a big part of the day's focus was about the coach, who is being savaged on social media and talk radio for not instantly engineering a turnaround from Tank Central to Cup Central. Of course, the silly quick-fix mentality those two segments of the populace jammed down everyone's throats is proving to be a pipe dream here because the Sabres didn't land Connor McDavid and because Murray squandered too many assets while overpaying for others.

So how much of that can be pegged on the coach?

Lehner and Ryan O'Reilly have made it clear Bylsma is not the issue in their minds. Brian Gionta and Josh Gorges certainly feel the same way. Still, it's not like anybody has made an impassioned defense of Bylsma or said it would be a mistake to change coaches either.

There's a school of thought you should fire Bylsma right now and not wait until next year, and it's not unreasonable. If the team struggles out of the gate yet again and Murray decides to pull the rip cord on Bylsma around, say, Thanksgiving, the risk could be another season going down the drain.

But the prevailing theory among fans seems to be that if the players don't like the coach, the coach has to go. And that's really laughable. Especially on a team full of young players.

The longtime joke in hockey circles is that the Montreal Canadiens use to despise Scotty Bowman for 364 days a year -- and loved him when the 365th included the delivery of their Stanley Cup rings.

Where is it a prerequisite that the players have to like the coach to have success? Names like Sutter, Ken Hitchcock and John Tortorella all have Stanley Cups and many of their players hated them. Joel Quenneville is known to be brutal to his young players at times.

And while you were all singing along to "Better Days" 10 years ago, do you think the Sabres where enthralled with Ruff? Go ask Thomas Vanek, Derek Roy and Tim Connolly, among others, what they thought.

What has to happen here is everyone has to come together and give a little. Bylsma is a little too inflexible for his own good at times, but his system would obviously work better if Murray gave him better players. The players -- as Lehner pointedly said after that dreary home loss to Vancouver in February -- need to respect the coach and follow instructions.

And has anyone thought about the possibility this is just an entitled group and they might try to act this way no matter who the coach is? What if you fire Bylsma and the same thing happens? Where are you then?

"I don't know the narrative," Bylsma insisted when asked about any disconnect he may have with his players. "We have conversations with players about the system throughout the time. We believe we're on the same page, have a good understanding of that system and how we play. I feel like there's not a disconnect. They're a part of the conversation and part of how we play and that's something we all have ownership in."

Eichel is known to be less than enamored with Byslma but tried to take the high road Monday when asked about the way the players respond to the coach.

"I'm not a coach. I'm just a player," said Eichel, repeating a response he's given a few times this year. "Our coaches put in systems for us to follow. We didn't do good enough job doing it and that's why we didn't win enough games."

While this is a huge disappointment in Buffalo, the Sabres' continued residence at the bottom of the Eastern Conference was no surprise nationally. Last fall, USA Today picked them to finish last in the East. TSN and the Sporting News both hit the jackpot by calling 15th. The Hockey News and ESPN.com both picked them seventh in the Atlantic. Frankly, I can't remember seeing a single prediction that had them in the playoffs.

But injuries aside, no one could have predicted last in the Atlantic, 15th in the East and 26th overall. Murray has said he's done with the lottery but the Sabres have a 7.6 percent chance at the No. 1 pick and a chance over 20 percent of a top-3 choice, albeit in what's considered a down draft.

Bylsma said it's going to be about fine-tuning both the roster and the way players attack the games. Preparation seemed to be a target of his remarks.

"We can't expect to continue to do the same things, do it the same way and have a better result," he said. "It's got to change and that change comes with some uncomfortable times and some unhappy people at different times. That's something we're going to keep pushing on for our team. We have to know we have to change if we're going to develop into the team we think we can be."

Murray needs to get Bylsma some defensemen who can move the puck up the ice. He needs to shore up the bottom two forward lines as well. More veteran presence with playoff experience (think the Leafs' acquisition of Brian Boyle from Tampa Bay) is a must for a club that hasn't gone since 2011 and has two veterans in Evander Kane and Zach Bogosian who have totaled nearly 1,200 games with nary a playoff appearance.

Bylsma is already thinking year three. Remember, his contract goes for five years. If this keeps up, he's not going to be around that long. But, frankly, neither will Murray.

"You add a few pieces and you have to continue on that development plan," Bylsma said. "I don't think anybody in here this year thought we would be a Stanley Cup contender. That's what we're trying to develop into and that's a process that's going to keep going on here into next year and the year after."

While it might seem premature in some ways to be talking about an exit for Bylsma after two years, what's fairly obvious here is this point: The Sabres must make the playoffs in 2018. The fanbase's patience is just about gone.

If the club fails, Bylsma won't be the only person looking for a new work address.

Okposo's leadership, illness on Sabres' minds as they depart