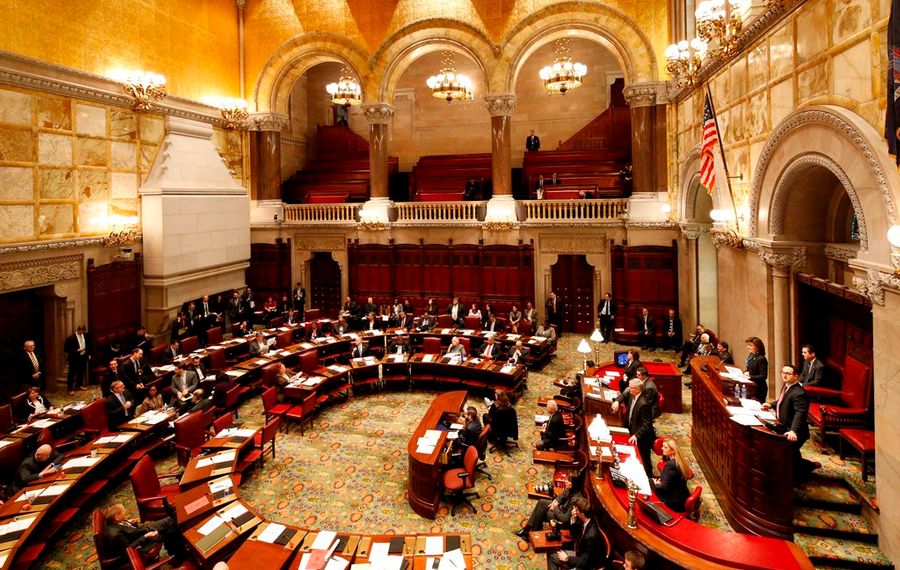 ALBANY – It is the latest a state budget has been adopted since 2010, but the Senate late Sunday night gave final approval to a $163.2 billion spending plan for the next year.

The budget was due April 1, and is the third in a row to be late.

The Senate reconvened Sunday evening after bolting Albany last Wednesday amid a breakdown in talks. Senators said they would return only when there was a final deal on the remaining, and most controversial, budget bills. That deal came Friday night.

To get the budget wrapped up and not risk another blow-up during their scheduled two-week break from Albany, senators returned to the Capitol Sunday from districts around the state and from vacations as far away as Florida. Five senators didn’t make it back, including Sen. Rob Ortt, a North Tonawanda Republican, as well as one senator traveling in Israel and another on Navy Reserve duty.

The final measures passed Sunday by the Senate provide for the flow of funds to state agencies, money to be sent to school districts, public college tuition to be cut or raised for students depending on their family incomes, and non-fiscal matters, including the legalization of ride-hailing upstate.

State aid to schools grows, but some administrators call it 'status quo'

"I congratulate all of you,'' Senate Majority Leader John Flanagan said shortly after 11pm as he closed out an especially challenging budget process that began in January and intensified during the past month of public and private battles at the Capitol.

While lawmakers touted many of the budget's components, even supporters lamented how the process went.

“I had great hope that I would feel much more comfortable about this budget than I do,’’ said Sen. Chris Jacobs, a Buffalo Republican in his first legislative session in Albany.

Jacobs voted for one of the most contested budget bills on Sunday night, but said he was concerned that “core government functions” were “essentially held hostage” by non-fiscal items that were linked to the overall fiscal plan, such as a new adolescent criminal justice measure and a new public university tuition plan that he called “a new entitlement” program for the state. Such items, Jacobs and other lawmakers contend, should be forced to stand on their own and not tied to key fiscal programs in the budget.

The Senate Sunday night spent nearly four hours debating the most controversial bill – dubbed the "big ugly" for its many unrelated items and tens of billions of dollars in spending. Despite the lengthy floor speeches by lawmakers, nearly all from a mainline group of Democrats in the Senate's minority, the bill ended up passing easily by a vote of 53-4.

It was an especially challenging budget for Gov. Andrew M. Cuomo, who battled a Legislature this year more eager to get deals they wanted than an on-time budget.

The tensions raised at the Capitol over the past few weeks – punctuated by late nights and weekends of negotiations coming together, breaking down and then finally getting resolved – have been evident as both houses took up the final set of budget bills to enact a 2017-18 budget.

The budget process opened for all to see the level of internal strife within the Democratic Party.

In the Senate, the mainline group of Democrats – who sit powerless in the minority – has used the budget to ratchet up its attacks on the Independent Democratic Conference, a group of eight lawmakers who have an alliance with the Senate GOP and who the mainline group refers to as “rogue Democrats.” The Democrats fought over everything from immigration policies, taxes and school funding, and their open warfare was played out by advisers on Twitter and by lawmakers on the Senate floor.

“While this budget makes some progress, many important issues were watered down or fell off the table entirely. As a result, the budget represents a lost opportunity to achieve even more for hardworking New Yorkers,’’ said Sen. Michael Gianaris, a Queens Democrat and member of the mainline group of Democrats.

In the Assembly Saturday, meanwhile, the house took eight hours to complete two bills, including an omnibus measure that had hundreds of unrelated items stuffed into it, including some of the more controversial measures involving criminal justice and education issues. The budget was passed in 11 separate bills, starting with the simplest – ensuring payment on the state’s debt – on March 28.

For Assembly Democrats, the final day of their fiscal work was part budget passage and part pressure relief valve. A series of Democrats throughout the day took to the floor to discuss the budget bill but then also bashed Cuomo, the head of the Democratic Party. It got so bad that Assembly Speaker Carl Heastie, a Bronx Democrat, temporarily recessed the proceedings to call his more than 100 Democrats into a private meeting to urge them to go easier on Cuomo.

You bet your app: Ride hailing upstate may debut by July 4

Some Democrats have been angry over everything from concessions made on criminal justice to income-tax levels affecting high-earning New Yorkers. Other Democrats have lashed out at what they say is a lackluster final plan to cut tuition payments for some New York public college students. Assemblyman James Skoufis, an Orange County Democrat, went so far on the Assembly floor as to call it a college “unaffordability plan.’’

The governor ignored the complaints. On Sunday, he took to a New York City radio show to tout the college plan, which raises the income level of students who will not have to pay tuition at state university campuses to $100,000 in the coming academic year. Cuomo called the plan “smart” and “right on a moral level” and “a life changer.’’ At the same time, the budget also includes a $200 annual tuition increase for five years for in-state students whose family income levels are above the amount of the new grant program. There is no plan in the budget to increase tuition for out-of-state students.

Cuomo took to social media a number of times on Sunday to publicize the college plan, quoting stories in national newspapers and proclaiming that it “shows the difference that responsible government makes.’’

No matter the post-budget spin by all sides, the fiscal maneuverings are over, and lawmakers can now take off for an uninterrupted, two-week Easter and Passover vacation.

Cuomo, as in previous budget adoptions, will likely travel throughout the state promoting different policy items – from raising the age of adult criminal responsibility to 18 and the legalization of ride-hailing upstate. One likely stop is Buffalo, where he will likely tout the approval of $500 million in the second phase of the Buffalo Billion program and the legalization of ride-hailing in upstate.

The budget also provides an overall funding increase for public schools of 4 percent, although for some districts, the increases will not make up for a budget maneuver enacted seven years ago during a financial meltdown in Albany.

Several budgetary factors have yet to be released, including how the budget was cobbled together, with specific numbers for spending, revenue, borrowing – as well as information that bond credit agencies want to see. Those details will come in a month when Cuomo's budget office releases the adopted budget's financial plan.

Herman Farrell, the head of the Assembly Ways and Means Committee, said last week during passage of one of the budget bills that the state dipped into reserves in the amount of $2 billion to balance the coming year’s budget.