A North Buffalo charter school that's expecting a lot of growth wants to expand its Great Arrow Drive building with a three-story addition designed to meet its future needs and improve its sports facilities.

The new building at 111 Great Arrow Drive would include classrooms, offices, a full-sized gymnasium, a cafeteria, a laboratory for science, technology, engineering, arts and math, and classrooms for the arts. Plans also include a bus loop, 83 additional parking spaces, green space, a playground and a turf soccer field on adjacent land.

In a letter to the Buffalo Planning Board, Trautman Associates Principal Robert H. Rumpl said the project would enhance "the neighborhood's urban fabric and quality of life."

The proposed precast stone masonry and metal panel building would be located on a 7.6-acre former industrial property at one end of Lincoln Parkway, expanding its academic campus near the Pierce-Arrow buildings now being redeveloped by a New York City firm and a Buffalo investor.

The planned bus loop and new parking is designed to alleviate the congested traffic that exists along Great Arrow, which is used by both Tapestry and P.S. 64 Frederick Law Olmsted School for buses, parking and primary access.

"Tapestry is looking to minimize their impact on the neighborhood by pulling their traffic off of the street," Rumpl wrote. "This action creates a safer environment for children as they enter and exit both school buildings." 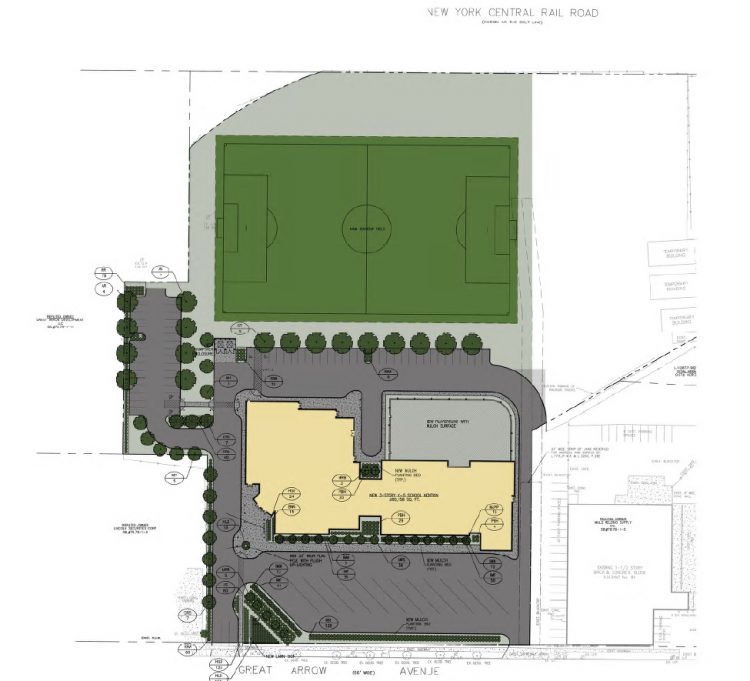 Tapestry, which opened in September 2001, is a K-12 "arts-integrated" and "expeditionary learning" school that started with 100 students up to fourth grade, before adding on one grade a year. It reached 12th grade in 2009-2010, with 515 students.

The Buffalo Planning Board will consider the school's project on Monday. If approved, construction would begin in August, with completion by the start of school in September 2018.