Eckl's is the house that beef built. Since the Great Depression started easing up, Eckl's has been carving beef and piling it onto kummelweck rolls or serving it straight up by the plateful, drawing faithful families of carnivores to its Orchard Park tables.

No one can prove who invented beef on weck, but there is ample proof that generations of Eckls have sold enough of them to consider renaming it a "beef on weckl."

When the state took the restaurant's original land for a highway in 1963, the Eckls moved the whole building to its current location. When its doors reopened, the tables filled again.

In 2015 Dale Eckl Sr. retired, and the place closed. James Cornell and Ted Smith bought it, and reopened it once again. When I finally navigated its sloping floors for the first time, it was a Saturday night. Guess what? The tables were filled. 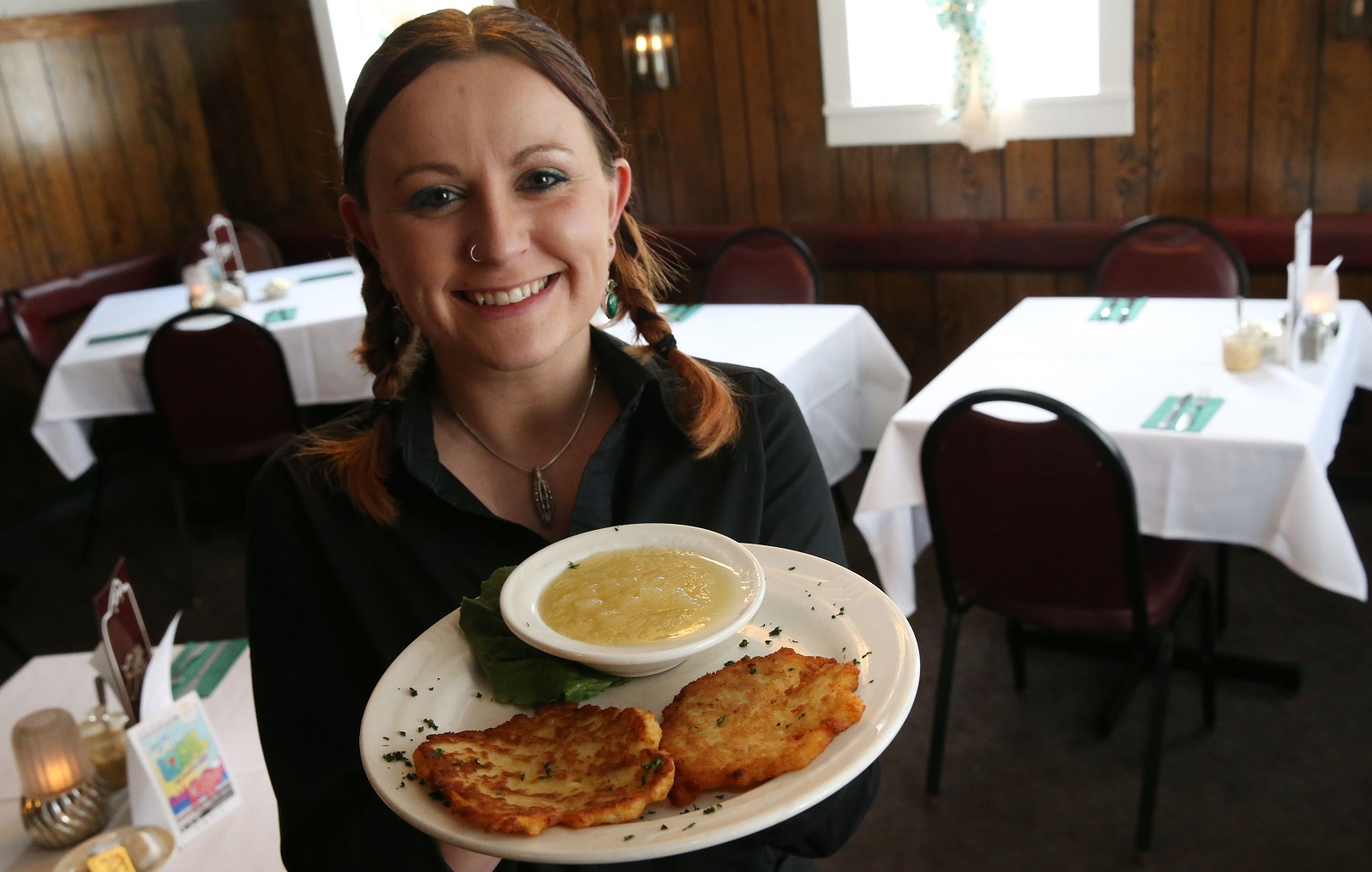 We waited in the bar for the rest of our party, consoled by its reasonable prices, like a $6 Tanqueray and tonic.

The new owners said their mission was to change nothing. The décor suggested they were successful. The last time I saw a paneling, carpet and button-studded bar chair combo like this, ash trays were standard. The beef-cutting station in the largest dining room was its most important design feature, a white-coated man carving up portions of top round and prime rib. Lesser dishes came from the kitchen, but the beef was a public affair.

There are no surprises on the Eckl's menu, a lineup of roast beef and seafood in various permutations; chops of pork and lamb; and chicken – wings, tenders, breast and in a basket. 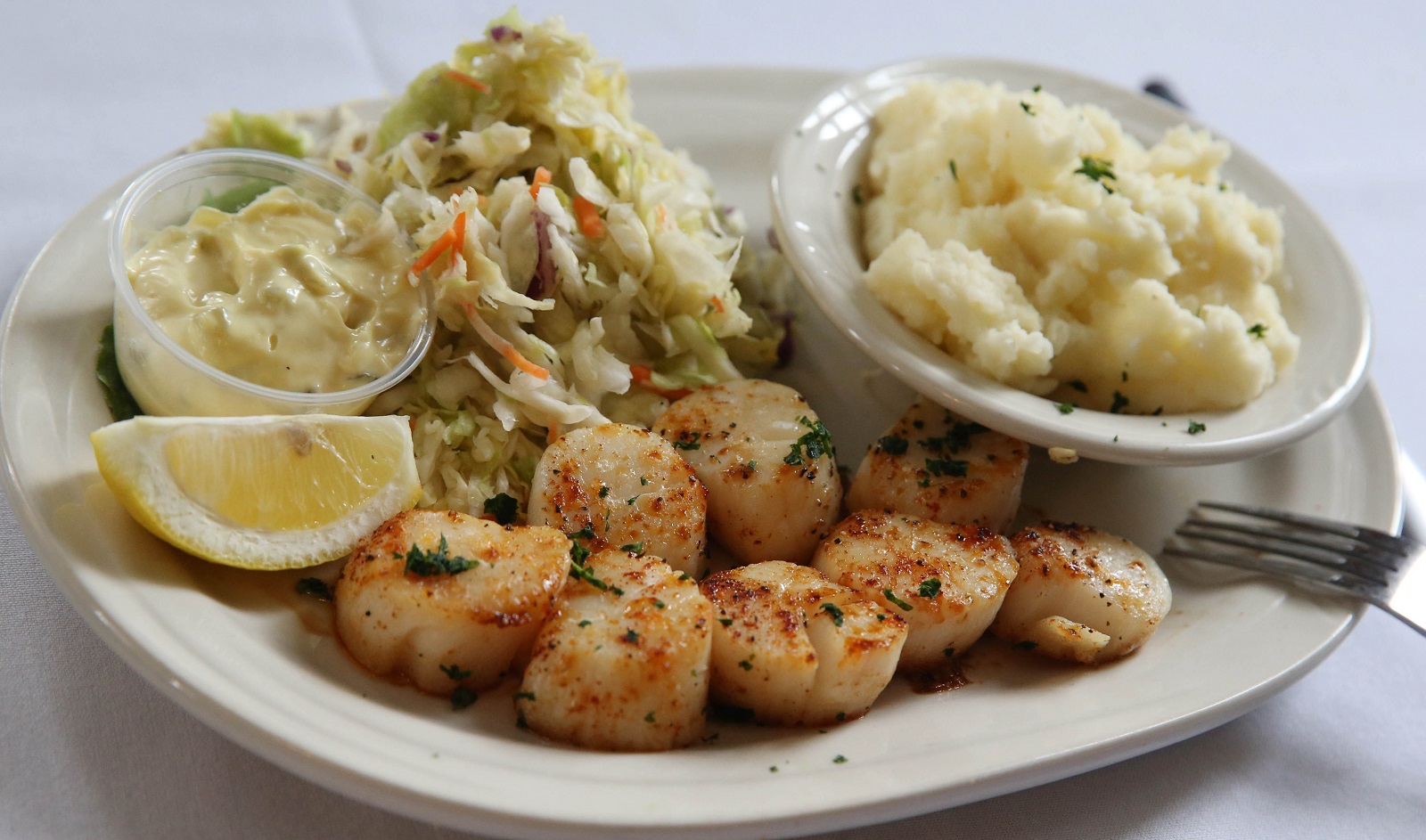 White tablecloths are changed between parties, and there's a real lamp flickering on the table, contributing to the old-school feel. So do relish trays, which come with seafood entrees and chops, bearing pickled cherry peppers, bread and butter pickle slices, radishes, celery, carrots and baby corn, plus black and green olives. The complimentary bread isn't as grand, a step up from Wonder bread.

Four appetizers that are old hat elsewhere are new here, so I asked for them. When the dishes arrived they underlined the enduring appeal of Eckl's: nothing fancy, just good, solid cooking.

Spinach and artichoke dip ($5.95) was browned under a broiler and served with plenty of red and black tortilla chips. A pair of crab cakes ($6.95) had more crab than crumbs and a stout brown crust. 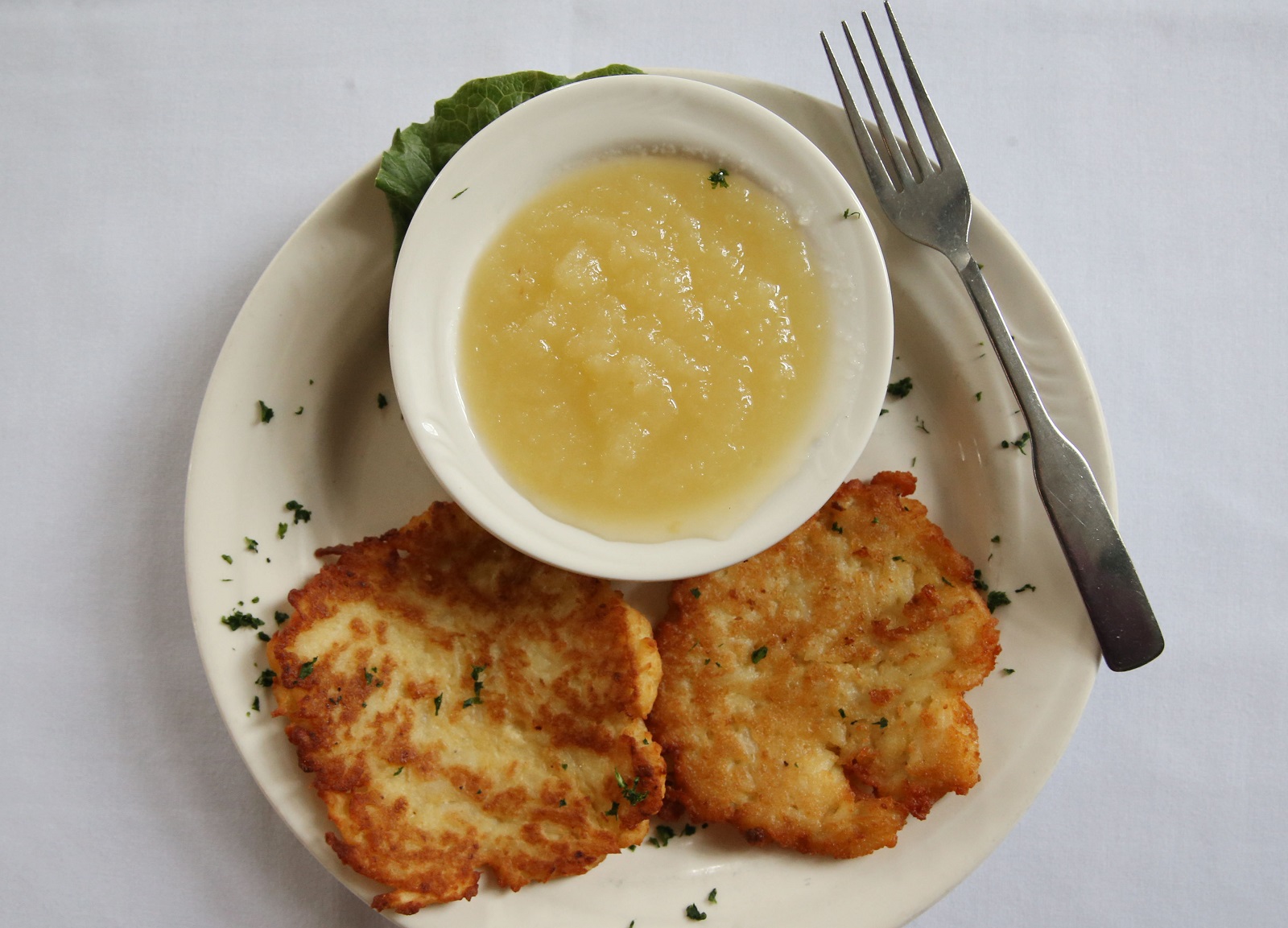 The potato pancakes are the German recipe of Eckl's cook Maria, and the pair arrive with housemade applesauce or sour cream. (Sharon Cantillon/Buffalo News)

Scallops wrapped in bacon ($7.95) offered tender shellfish surrounded by bacon crisped with a turn on the grill. Best of all were two potato pancakes ($5.95) with lacy, crispy edges from coarsely shredded spuds, the better for scooping up applesauce.

French onion soup au gratin ($6.50) wasn't as satisfying, with weak broth, light on the onions and a patchy cheese layer over croutons.

Our server was attentive, professional and detailed in having diners describe their desired doneness for lamb chops ($28.95) and pork chops ($21.95). They both arrived a notch too well done, perhaps edged on by the sizzling the meat did on iron platters on the way to our table. 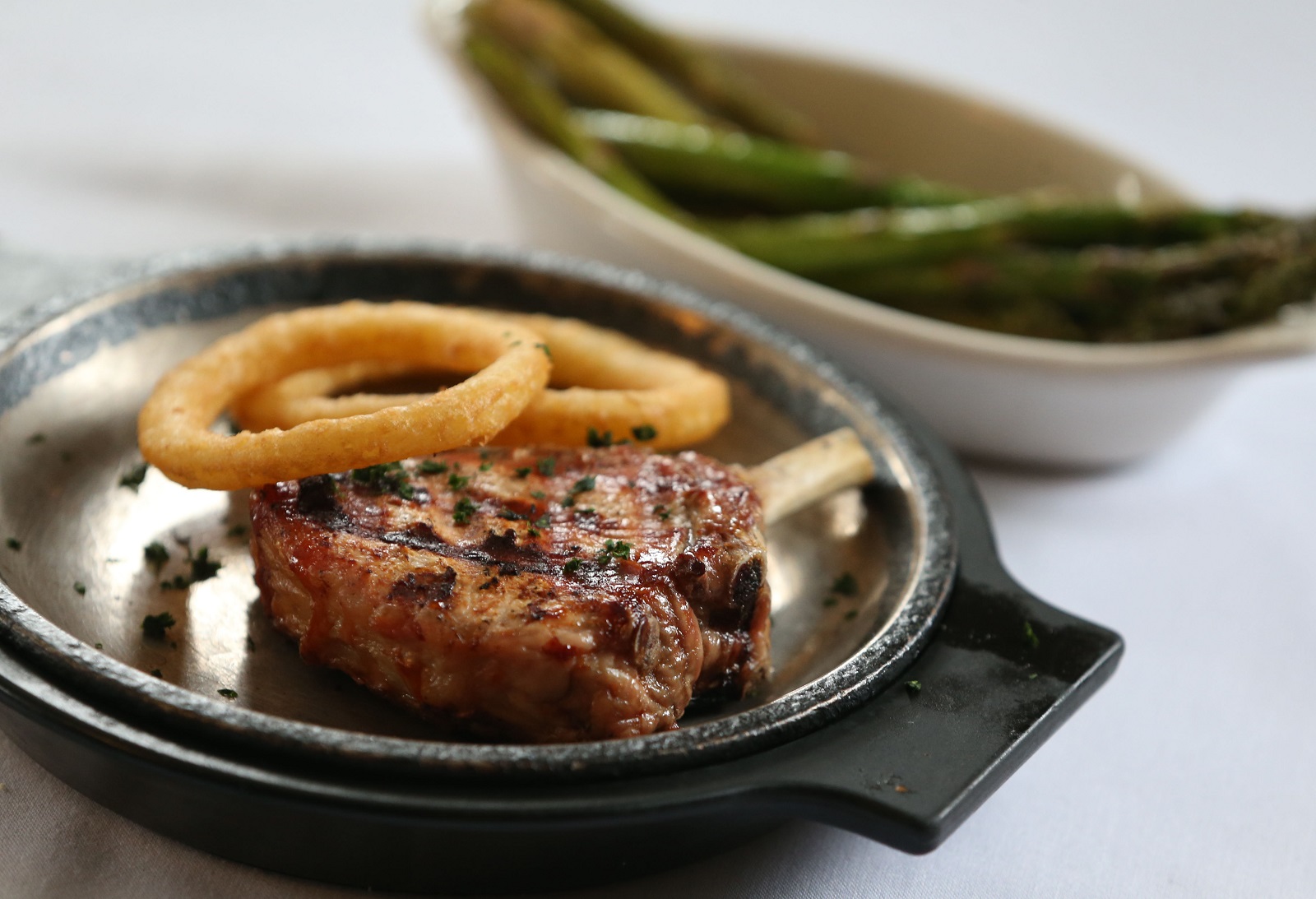 The pork chop dinner is an 8-ounce 1-1/4 inch center cut with salad, and vegetable or potato. (Sharon Cantillon/Buffalo News)

Not so the beef. The iconic beef on weck ($10.95) was spot-on medium rare, about an inch of meat on a jus-moistened bun. The beef was ruddy, sliced thin and tender enough to make a clean bite possible. You can find bigger beef sandwiches in Buffalo for less money, but this one was just right. If I had grown up eating at Eckl's, I would no doubt defend it against all comers.

A rare large beef plate ($14.95), just meat and jus, might have satisfied two beefeaters, especially those avoiding gluten in all its forms, including weck. Both sandwich and plate were enhanced by the application of sinus-clearing horseradish from the jar on the table.

Side salads were dotted with obnoxiously crunchy croutons, but the star was tangy, smoky hot bacon dressing, which I wished I could get on every side salad. A baked sweet potato was naturally sugary, and soft enough to scoop like ice cream. A side of diced winter squash, apparently forgotten on a griddle, was unpleasantly charred on one side.

We tried the fish fry in both haddock ($17.95) and yellow pike ($17.95). The haddock won, with a crunchier crust holding a pleasantly flaky fillet. The pike's coating was chewier, and I failed to find a difference in flavor. Both came with sweet vinegared cole slaw, tartar sauce and coated fries. 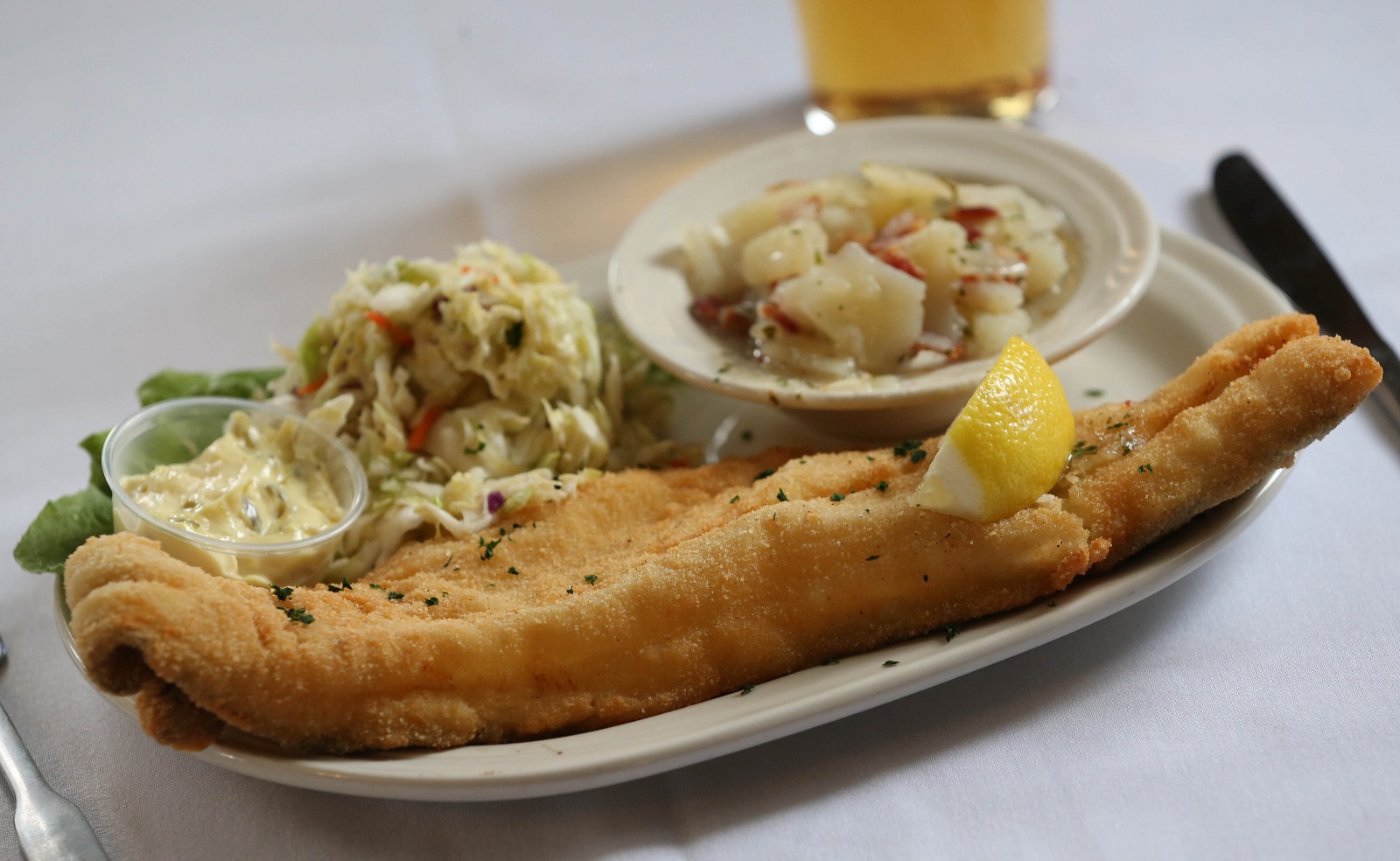 Eckl's haddock fish fry is made with a golden batter and comes with coleslaw and a choice of potato. (Sharon Cantillon/Buffalo News)

For dessert ($6.95), a blueberry crumble cheesecake was a cool and creamy amalgam of cream cheese and pie filling. Tiramisu was enjoyably light and delicate, with espresso-soaked ladyfingers in a creamy matrix.

Tradition drives the program here, and regulars reap the rewards. I respect that even though first-time visitors like me are unlikely to find the same satisfaction in its simple, straightforward food without a side order of backstory.

Nostalgia is a heck of a sauce. 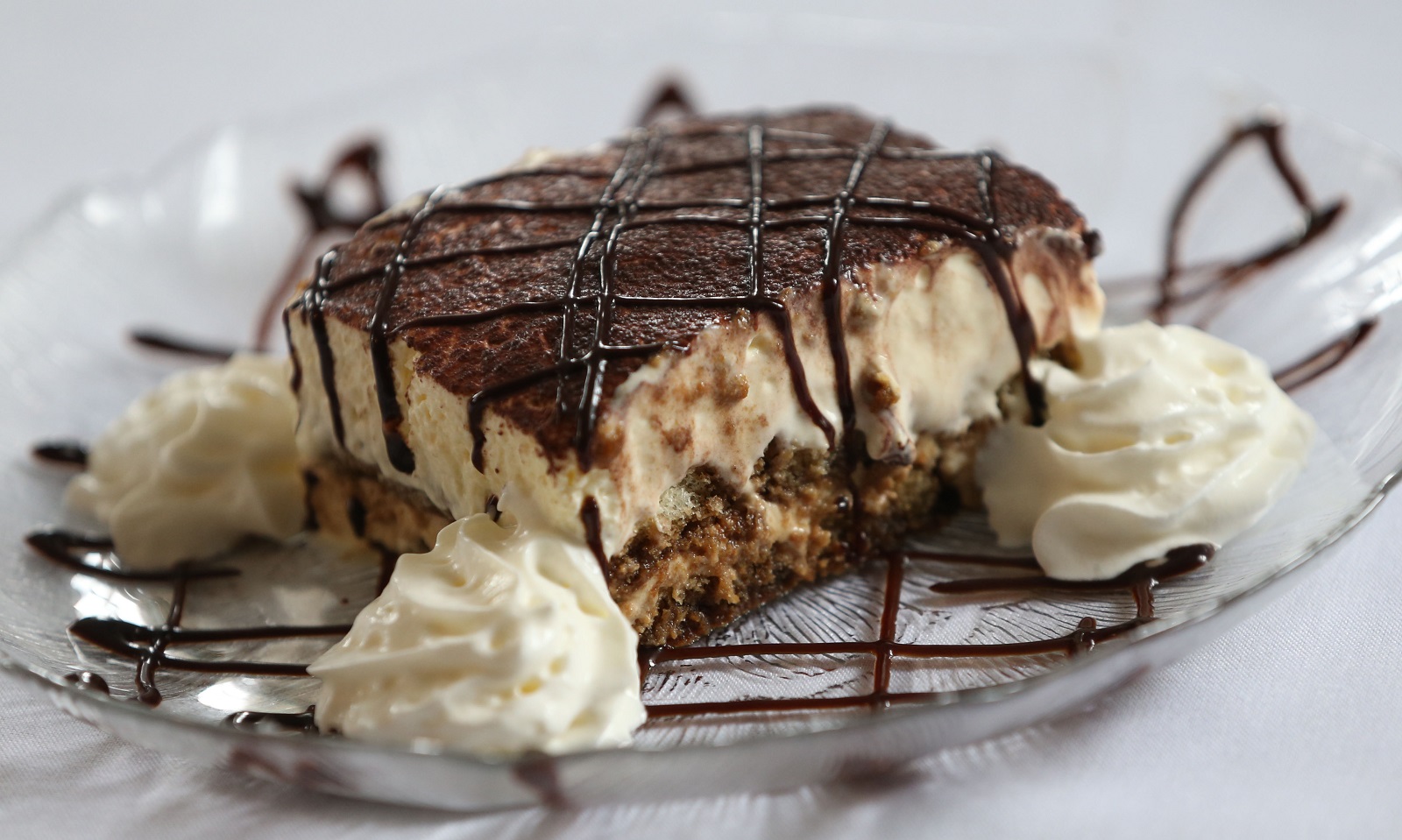 The tiramisu is one of Eckl's rotating desserts. (Sharon Cantillon/Buffalo News)

Tradition, and beef, defines the menu

Wheelchair-access: One step, no ramp. 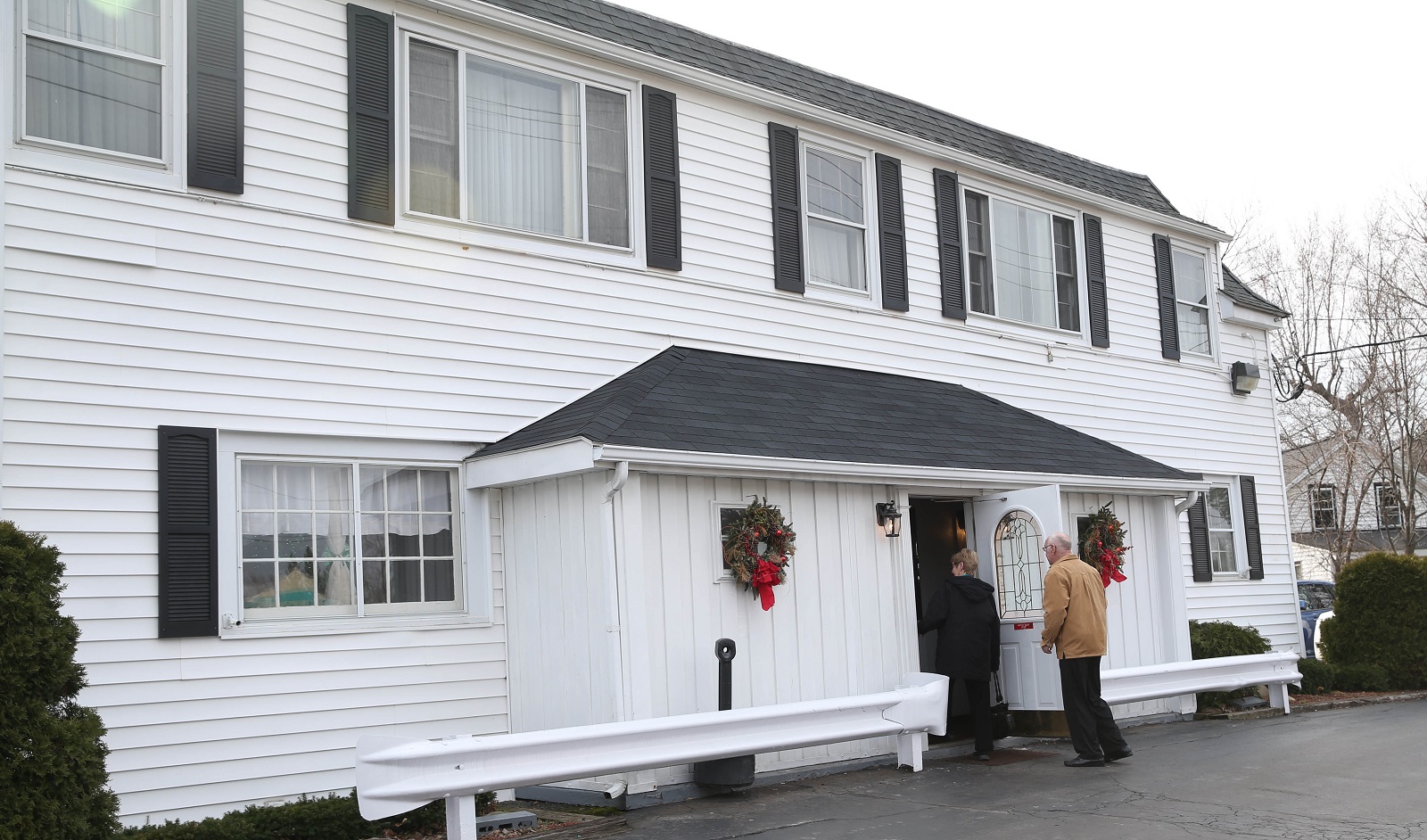 Eckl's building is 200 years old, one of the oldest in Orchard Park. (Sharon Cantillon/Buffalo News)

At Oak Stave, an eatery getting its sea legs