Nurses and staff at UBMD Pediatrics began their work day at 6 a.m. Thursday in the outpatient clinics at Women & Children's Hospital on Hodge Street.

They ended it in early evening a mile away in a new children's outpatient center in Conventus on Main Street after trucks spent the day hauling everything from information technology equipment to nursing supplies to the new site.

It was one of three big moves this year to transfer dozens of outpatient clinics and other services from the old Children's Hospital complex to the Buffalo Niagara Medical Campus leading up to the November opening of the new 12-story John R. Oishei Children's Hospital.

The latest move, which included UBMD Pediatrics, clinics and a pharmacy, will open to patients Monday inside the new outpatient center in the Conventus medical and research building at 1001 Main St.

The flurry of moving and unpacking in one day was followed by a day of mock run-throughs Friday for staff to make sure everything was "a go" for Monday's opening.

"It was very hectic, but it was organized for a very, very long time," said Dr. Teresa Quattrin, president and chief executive officer of UBMD Pediatrics. 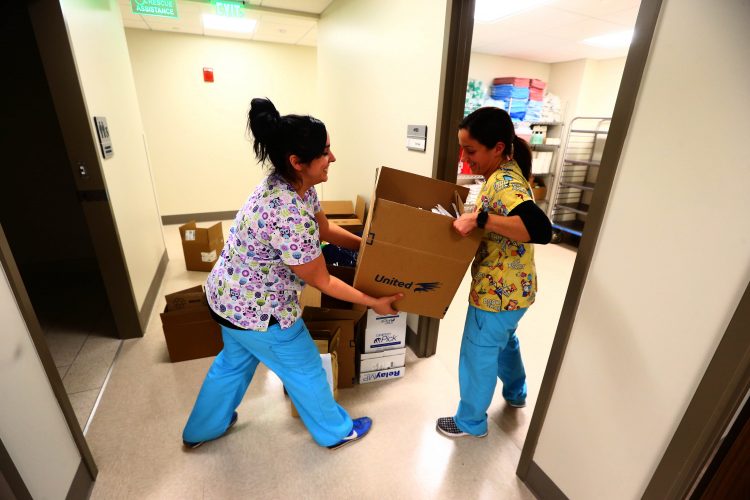 Emily Aquino, left, a registered nurse at UBMD Pediatrics, gets a hand from LPN Meghan Fusilli as they unpack supplies in a storeroom at the new pediatric clinic opening in Convenus. (John Hickey/Buffalo News)

The Oishei Children's Outpatient Center, which opened in January in Conventus, will be connected to the new hospital under construction on Ellicott Street.

"It is going to make a tremendous difference for all the kids and adolescents who are in need to see pediatric subspecialists," Quattrin said. "Because of the different layout of the space, we will also be able to facilitate for patients to see more than one sub-specialist in their same appointment."

The eight pediatric clinics that moved are on the fourth floor and join a cadre of other clinics in the outpatient center in Conventus that moved in January.

The fourth-floor suite is dedicated to pediatrics and has 22 rooms, including what UBMD Pediatrics calls its "reception welcome area."

At 16,000 square feet, the suite is two-thirds larger than its former home. "We will have, overall, more room to allow for much better patient flow and patient experience," Quattrin said. "And when they need to go to adult sub-specialists, they are right next door. The handoff and transition to adult care will be on the same floor."

The new pediatric suite is about one quarter of the 49,000 square feet on the fourth floor of Conventus. The remaining fourth floor space is used by UBMD Physicians' Group and sub-specialty practices. Those services are opening on a phased-in basis, with neurology and OB-GYN having opened about two weeks ago.

"I have been contacted by grown-up patients still in Buffalo and some of their parents who have seen the building from the outside and are still excited, because when you have a chronic disorder and have to go through the trauma of having to see a doctor every three months – it will be a much nicer environment for the kids and their families," Quattrin said. "They know it will be a staggering change."

The third outpatient move, planned for October, will include cardiology, hemotology and oncology services. Cardiology services will move to Conventus, while hemotology and oncology outpatient services will be paired together in a joint program based at Roswell Park Cancer Institute. Inpatient care for those patients will be at the new Oishei hospital.

The final chapter of the Children's Hospital moves concludes in November, with pediatric critical care, neonatology intensive care unit and other inpatient care, along with the emergency department, opening in the new hospital at 818 Ellicott St.

Parking for the clinics and outpatient services is encouraged in the High Street parking garage beneath the Conventus building.