Montez Billquist had it all mapped out. On an April evening, long ago, the 15-year-old was on a quest with three teenagers from Jamestown: There was Montez's best friend, Ann Meurer, and Ann’s younger sister Pat, and Karen Sampson, another teen Pat asked to come along.

Roy Meurer, Ann’s father, dropped them off in a parking lot at the old Buffalo Memorial Auditorium. He worked as a draftsman in Buffalo, and he’d provided them with this chance to see a once-in-a-lifetime concert they never thought they could attend. Roy told his daughters they could each invite a friend. Ann brought Montez, a companion in mischief. Anytime they were together, those around them knew they'd better brace themselves.

In the parking lot, Montez decided she could find a better view than the one promised by the $1.75 ticket in her hand. She said to the others: “Come on. Let’s sneak in.”

While the younger girls declined and went to their seats, Ann Meurer immediately decided she'd take part. For Montez, it was a fateful choice.  It would cost her a boyfriend but it would earn her a place in legend.

The performer they went to see:

Before the show was over, he’d reach out from the stage to hold Montez's hand. She'd turn into a central figure in some unforgettable photographs that captured Elvis on his knees, singing directly to Montez during his final song of the night.

“I never saw him again,” Montez said. She describes herself as someone who rarely looks back, who prefers to confront the world as it comes toward her, but she called that concert "a positive highlight of my life.” 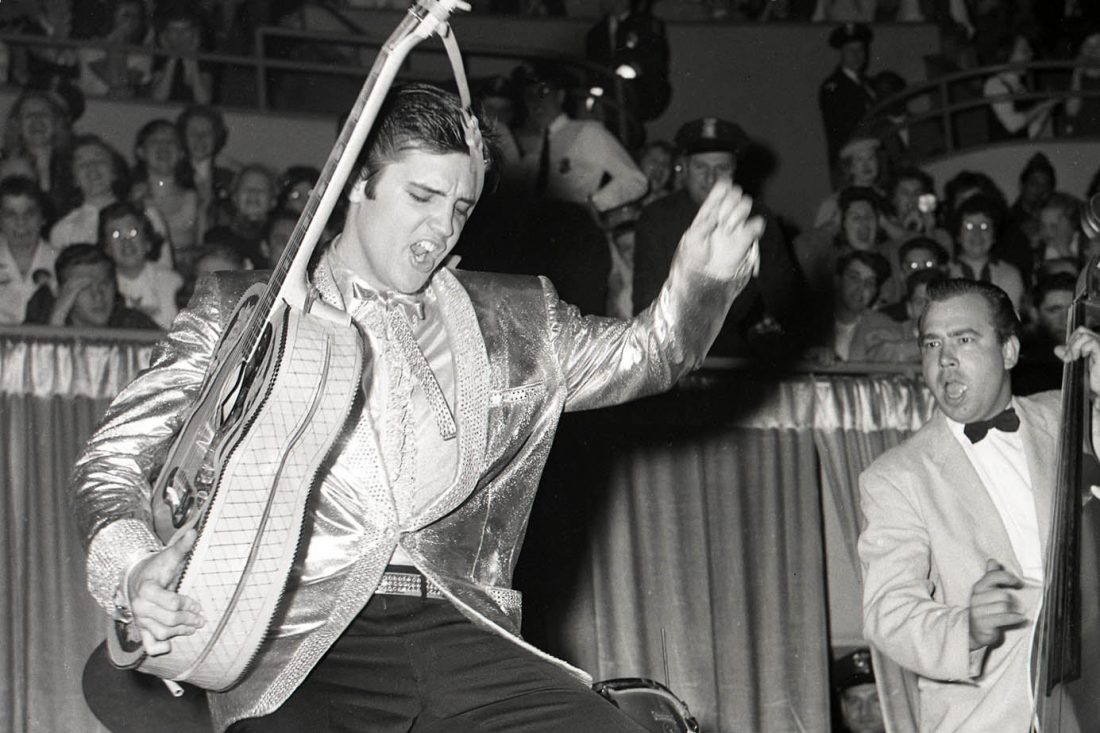 A photograph of Elvis Presley in Buffalo, 1957, that is now a famous image of the performer. (Robert L. Smith/The Buffalo News)

Her name today, at 75, is Montez Cusimano Thalman. She moved to California in the early 1960s. Her own parents divorced when she was a little girl, “before many people divorced,” and much of her childhood in Jamestown involved struggle. She remembers children at school who were not kind to her, who were not allowed to play with the daughter of a divorced woman. Her family, she said, never had much money.

She took comfort in the loyalty of her best friend, Ann Meurer – now Ann Shea, of Coeur D’Alene, Idaho. Montez lived on Fairmount Avenue in Jamestown. Ann's family had a house on the far side of the backyard. They walked to school together. As teens, they’d go to Perry's, a soda fountain in Jamestown that is now called Lisciandro's, and listen to Elvis on the jukebox there.

This was not the older Elvis of the Las Vegas years. This was the sneering, swivel-hipped, hooded-eye musical dynamo who seemed to embody teen rebellion. He terrified many parents and electrified their children.

The girls figured they had no chance of being there when he performed in Buffalo. But one night in 1957, at the dining room table, Roy Meurer calmly told his daughters he’d bought four tickets. He offered to drive them if they wanted to go.

“We were ecstatic!” Ann Shea said by telephone Saturday, from Idaho.

Their tickets were for seats deep in the arena. On the night of the show, once the girls saw Roy drive away, Montez and Ann got moving with their plan. They were already guerrilla veterans at the art of “sneaking in.” When Lucille Ball and her then-husband, Desi Arnaz, visited Jamestown for the premiere of the film, “Forever Darling,” the girls found a way into a hotel where the couple was staying. They came upon Lucy in a housecoat, and asked for her autograph.

Lucy signed for them, then told them to leave.

She was not pleased.

Elvis represented a whole new level of triumph. Before the show, Montez and Ann ran through a parking lot and scrambled up a ramp behind the stage. No one stopped them. Inside, stunned, amid a flood of distracted musicians and other adults, they realized they were just outside his dressing room. Elvis emerged, wearing a glittering golden jacket as he hurried toward the stage. The girls, without hesitation, followed him.

"All anyone could have done," Ann said, "was to kick us out."

No one did. Montez and Ann pushed up to the stage, shouldering for a spot alongside police officers, photographers and stage hands. They watched as Elvis triggered a shattering explosion of noise that Sylvan Fox, a Buffalo Evening news staff writer of the time, described as “incredibly ear-splitting screams and a fervor of arm-waving” from more than 10,000 in attendance, primarily teens.

Occasionally, Montez recalls, Elvis would look down and catch her eye as he sang. She kept holding up a piece of paper to him, hoping he would pause to sign it. Yet what he did for her, in the big picture, was far more memorable. Indeed, this is how Fox described her role during the climactic version of “Hound Dog” that ended the 30-minute show:

Elvis, Fox wrote, “moved violently about the stage, clasped the hand of excited Montez Bellquist, 15, of Jamestown, threw himself to his knees in an impassioned gesture, ended the song and dashed from the stage. He ran full stride down the ramp, into a waiting auto and was gone.”

Robert L. Smith, a photographer for The News, captured the moment when Montez reached toward Elvis, when he dropped onto his knees and sang for her. After the show, back in Jamestown, Montez wrote to Smith and asked for a print of the image. The photographer obliged as an act of kindness, she said, and a copy of the photograph – which ran on the front page of Saturday's Buffalo News –still hangs on her wall.

From the instant Elvis sang to Montez, her life was never exactly the same. She said she was mobbed by fans in the parking lot who wanted to touch the hand that Elvis held. Back in Jamestown, she received so much attention in high school, and from the regulars at the jukebox stop, that her boyfriend – who felt he could not compete with Elvis – broke up with her.

As a young woman, she married Dave Cusimano, who worked for her father’s cab company. But the company went broke, and Cusimano moved to California. Montez followed with their three children “and a suitcase packed with toys.” The marriage eventually crumbled. Montez "worked a lot of jobs" to support her family before she married the Rev. Norman Thalman, a Lutheran minister who died seven years ago.

In retirement, she finished a book, “Just in Time,” which is about loss, alcoholism and “rekindled love.” Parts of the story, she said, are “pretty much true.” Her greatest accomplishment, she said, was fighting through many difficulties to raise three hard-working, loyal children. That parenting demanded a certain self-belief, and for that – at least on some level – she gives thanks to Elvis.

She never saw him perform again after the show in Buffalo. “But I felt really close to him," she said. "I came from a troubled family, and his music always soothed me.”

Montez sensed a connection. She knows Elvis had almost nothing as a child, that he was raised amid harsh times in Mississippi. She hangs onto the photograph that shows her reaching toward him as he sings, as well as a pencil drawing of his face that she bought years ago. On the day he died – the 40th anniversary will be this August – she felt a sense of grief almost akin to losing family.

In a way, maybe he was. Montez finds a certain lasting power in the idea that in Buffalo, in a hall filled with more than 10,000 people, at a time when she believed she had no status in the world, the king of rock 'n' roll made a statement on her worth:

He took her hand, fell on his knees, and he sang for her alone.

Sean Kirst is a contributing columnist with The Buffalo News. If you have memories of Elvis at any of his Upstate New York appearances, feel free to leave them here or share them with Kirst by emailing him at seanpeterkirst@gmail.com. You can read more of Kirst's work in this archive. Here is the entire image of Montez, with the Robert L. Smith photo that captures her with Elvis: 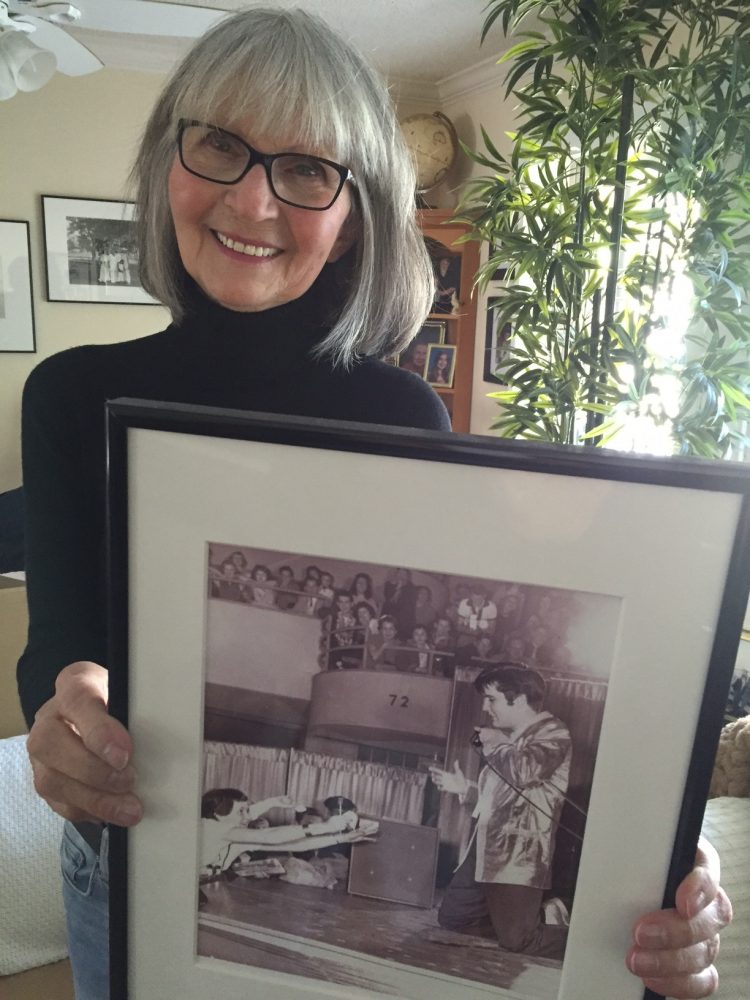 Montez Thalman and the Robert L. Smith photo that she keeps her on wall; that's Elvis Presley, in Buffalo, kneeling for a teenage Montez. (Image courtesy Montez Thalman)