A robot butler at the Westin Buffalo on Delaware Avenue is welcoming guests to the future – and it doesn't even expect a tip.

The Savioke Relay is a sleek, waist-high robot programmed to provide automated service to hotel guests. It doesn't make beds and it can't call you a cab, but it will bring a cold cocktail to your room, deliver extra towels to your door or drop off a new tube of toothpaste if you forget yours at home.

"Everybody stops to watch it. They're amazed," said Thomas Long, the Westin Buffalo's general manager. "It's a different experience guests won't have at another hotel."

The Westin is employing a "robot butler" to wait on guests. It can deliver drinks, merchandise, etc. built by Savioke pic.twitter.com/Co6Seq7DSS

When it's not in use, the Relay charges at a docking station next to the hotel's front desk. Once a guest calls with a request, a customer service agent loads the robot with snacks, souvenirs or whatever was ordered, then programs the robot to make the delivery to their room number.

Guests are given a heads up that their delivery will be made by a robot.

"Parents will sometimes request the butler for their kids," said Samantha Elwell, front office manager. "They want to see R2D2, they say."

The Relay makes its way down the hall with intermittent "beeps" and "boops" and tells the elevator which floor it wants via Wi-Fi. Once it gets to the selected guestroom, it calls the guest's telephone to announce its arrival. The robot waits until it sees the door open, then pops the lid on top of the machine so the guest can retrieve their order.

Before the robot leaves, it asks if the guest would like anything else and, if not, asks them to rate their Relay experience. If the robot gets a five-star review, it makes a digital "Wooooo!" noise and wheels side to side with a little dance.

The Westin is the first hotel in New York State and one of just 20 hotels in the country to employ a Relay which has been serving customers at the high-end hotel since December. Buffalo would probably be waiting much longer for a robot butler if it wasn't for Delaware North Cos., which owns the hotel and is headquartered in the same building, according to Long.

"They have a willingness to try the technology that's out there," he said.

The Westin Buffalo is the first Delaware North hotel to use a Relay. The company declined to disclose how much the robot cost. 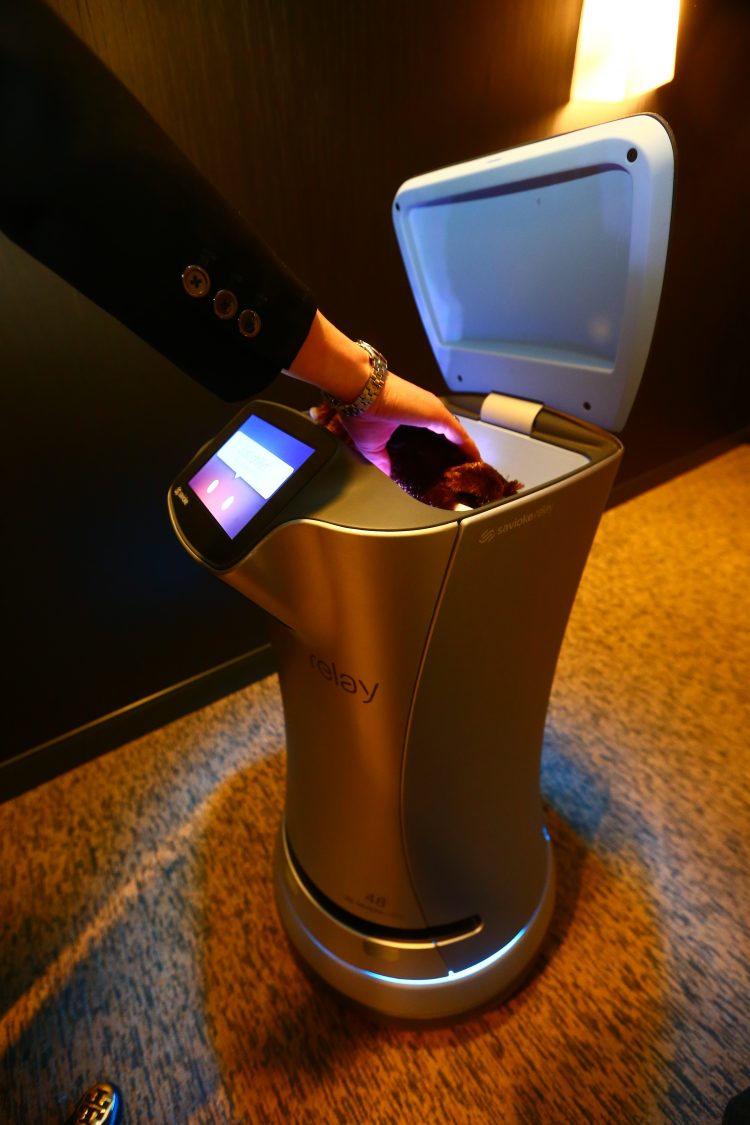 Samantha Elwell gets a stuffed animal at Delaware North from the robot butler at The Westin Buffalo, which the global hospitality and food service company operates. Designed and built by Savioke, the "robot butler" can deliver drinks, merchandise, etc., to guests. (John Hickey/Buffalo News)

Relays are made by California-based Savioke and were first used at an Aloft in Cupertino, Calif. The robots have been used in Dallas, Florida and California.

News of this kind of automation in the service industry has raised concerns about robots taking jobs from humans. A calculator on the Savioke website shows that Relays can bring a significant return on investment over human labor.

But the Westin says that's not the case – that humans are needed to load and program the robot, Long said. It's really more of a novelty, though it might create some added efficiencies as a bonus.

Either way, we're a long way from the futuristic Hen Na hotel in Japan, which is completely run by robots (and one animatronic dinosaur).

Relay machines elsewhere have been given names, such as Botlr, Wally and Dash. The Westin launched a poll Thursday to give Buffalo's machine a locally inspired name. Users will be able to vote for a name on the Westin Buffalo's Twitter and Facebook pages. The names are Chip (referring to Chippewa and its microchips), Grover (after former Buffalo mayor Grover Cleveland), Silo (after the grain silos) or Sally (after Sally Johnson, the former first lady of Buffalo who lived on the site of the current Westin Buffalo).

Westin is one of the upper-upscale properties in the Starwood collection. The hotel occupies the first five floors of the 12-story hotel and office tower. It opened in September.