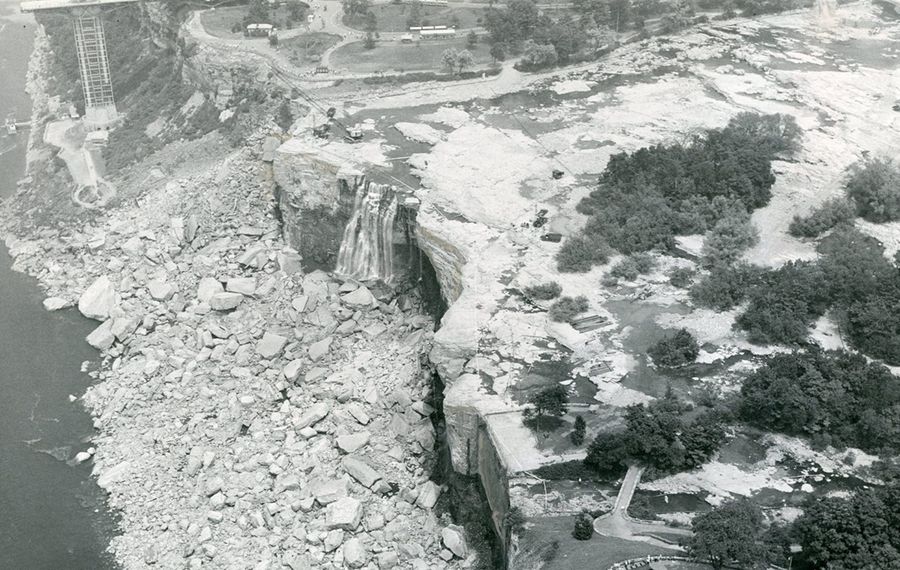 This story was originally published March 29, 2017.

The U.S. Army Corps of Engineers wasn’t the first to dry out Niagara Falls.

Nature did it long ago, Ontario's Niagara Parks wrote, shutting down both sides 170 years ago today.

All it took was several days of gale force winds from the southwest. That pushed Lake Erie’s lingering ice floes to the mouth of the Niagara River, a natural glacial gathering place even in the days before the Corps of Engineers’ Ice Boom.

The floes, millions of tons of ice, packed up so tightly that it became a dam. By the morning of March 30, 1848, the rushing river was reduced to a trickle - all the way from Buffalo to the cataracts.

A farmer from Niagara Falls, Jed Porter, was the first to discover that the mighty faucet had been turned off, according to newspapers of the day and historical accounts. Out for a stroll around midnight near the Falls, he heard silence. No roar of rushing water.

Come morning, flour mills and other factories along the banks, without power from their water wheels, had to shut down.

As the Buffalo Express newspaper reported at the time:

"The Falls of Niagara can be compared to nothing but a mere mill dam this morning. In the memory of the oldest inhabitants, never was there so little water running over Niagara’s awful precipice, as at this moment! Hundreds of people are now witnessing that which never has, and probably never may again be witnessed on the Niagara River.

"Last night at 11 o’clock the factories fed from the waters of this majestic river were in full operation, and at 12 o’clock the water was shut off, the wheel suddenly ceased their revolutions, and everything was hushed into silence. Various are the conjectures as to the cause; the most reasonable of which is that Lake Erie must be making a grand delivery of ice, and this the mouth of the Niagara, although large, is not quite enough to take in the whole at once, and that the consequences are, back water."

People from both sides of the border soon were venturing out where no man or woman had walked before. The U.S. Cavalry joined the parade, riding their horses back and forth across the riverbed.

Souvenir hunters hauled off previously submerged tomahawks and a variety of weapons from the War of 1812.

Enterprising youths with a logging cart removed some 40- to 60-foot-long pine timbers from the vicinity of Three Sisters Islands.

The operators of the Maid of the Mist sightseeing boat, which started sailing two summers earlier, used the opportunity to blast away some dangerous rocks in the gorge below the Falls.

As word spread, sightseers swarmed in from nearby cities and towns. After sunset, hundreds of people reportedly lined up and carried torches along the brinks of the American and Horseshoe falls.

Others saw this prank of nature as a sign that the world was coming to an end. Churches held special services and congregations prayed for the water to start flowing again.

It did – shortly after nightfall on March 31, after the wind shifted to the opposite direction and weakened the impromptu ice dam.

The pressure from pent-up Lake Erie sent a wall of water cascading down the river and surging over the Falls with a mighty roar.

Since that performance, there hasn’t been an encore. And there won’t be one anytime soon, thanks to the Army Corps of Engineers.

Its ice boom won’t allow it.