Could this one show possibly live up to all the hype I created for myself by publicly writing about it in detail and anticipation for 10 weeks in a row?

The answer is yes.

The day of the show, I was in work mode. I was focused. I didn’t eat much because I wanted to make sure I fit into the Extra-Medium button down I had picked out for the night. I had a clementine for breakfast and a single Mighty Taco for lunch -- mild sauce, no sour cream.

I didn’t drink any coffee or anything other than water all day. Caffeine makes me sweaty. I knew the show would come and go in a flash, and I wanted to give my best performance, so I prepared like a thoroughbred on Derby Day, grazing the town and keeping my head clear until the big moment. 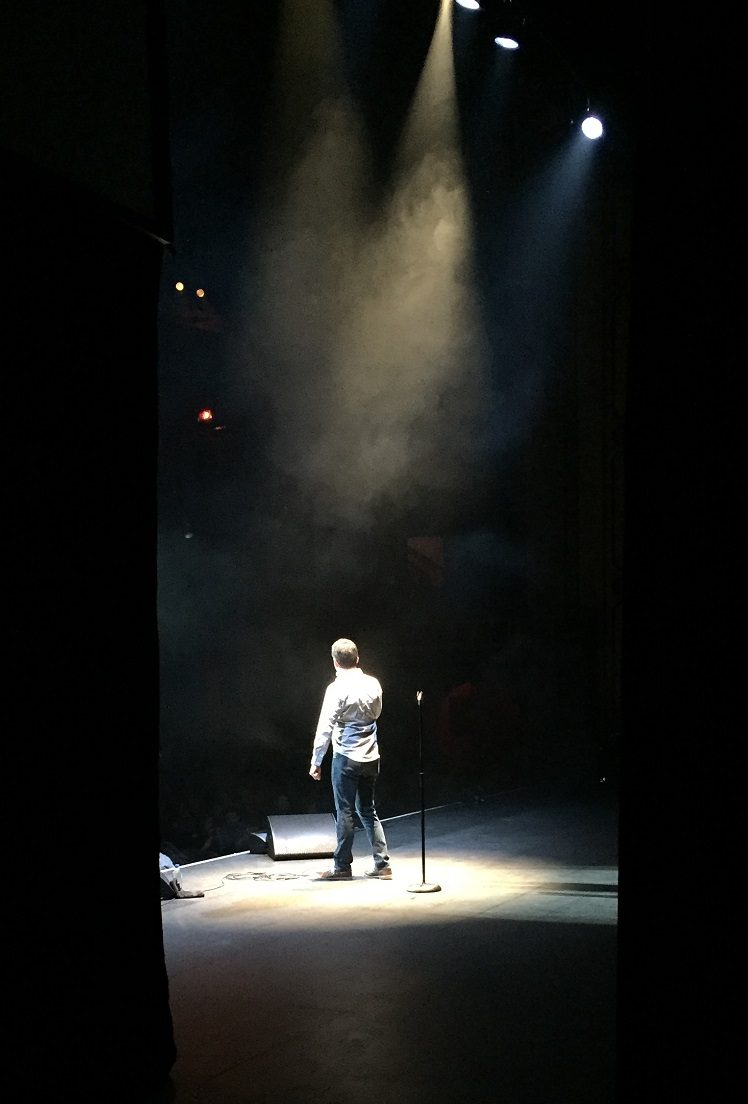 Brian Herberger on stage at Shea's.

I listened to my set from the theater show I opened for Sebastian in Charlotte, N.C. a couple of weeks back. I knew in my head everything that I wanted to say and touch on for this show.

A couple of hours before start time, Sebastian’s tour manager emailed me and said that I could do 20 minutes instead of the 15 I was expecting. This was great news. I just had to figure out what I wanted to do with the extra five minutes.

My fiancee and I got to the theater an hour before showtime. I came in through the front and awkwardly explained to the gentleman at the ticket booth that we didn’t have tickets because I was on the show. My bag of deodorant and hair care products seemed to be proof enough for him, and he led us backstage.

It was quite a rush to walk through the empty, historic theater on the way to my green room, knowing that in less than 60 minutes the seats would be full with all eyes on me. There wasn’t much time for a tour or anything like that. They led us up an elevator to a room with a couch and a private bathroom. All that was left to do was wait.

It helped having already done a few other large-sized crowd shows with Sebastian before. I knew what to expect. I was still focused. My fiancee seemed to be more nervous than I was.

The only thing I was worried about was that there might be a good number of people trying to find their seats as I took the stage. I didn’t want to have an audience scrambling to get seated.

Finally, it was time. The voice of god called my name over the sound system and I walked out to the sweet sound of applause. After a quick greeting, I went with “Shea’s Performing Arts, this is incredible for me. I was born and raised in Buffalo right off of Hertel Avenue.” (Loud cheers and support from the mostly Italian-American audience). “Oh that’s right, and so were most of you.”

I toyed with the idea of making a joke about how we were lucky they didn’t decide to suddenly move this show to the Outer Harbor, but I opted to segue into some other Buffalo material instead.

I was excited to be able to share this night with so many people who mean so much to me. I was able to secure tickets for about 30 friends and family members. Most of them were right there in the fourth row, taking it all in with me.

From bartender to stand-up act, Herberger rises in comedy

One surprise came about a minute into my set when out of the corner of my eye I realized that I was being broadcast on two huge screens on either side of the stage from the chest up. This wasn’t done at the other theaters, and suddenly I was extra conscious of my movements and facial expressions with each word.

I glanced down at a clock underneath a speaker on stage to make sure my pacing was right and that I was on schedule. If not, I would have to add in an extra joke or take something out toward the end of my set. The crowd was great, and I got big laughs at every spot I was hoping to get them. With two minutes to go, I got ready for my big closer. It hit harder than any joke I had told up to that point, and I paused a little longer than usual to milk the laughs.

As I wrapped up, I put the mic back in the stand and thanked the crowd. “I’m Brian Herberger, thank you! (applause) You guys are awesome, have fun with Sebastian.” The walk to stage left seemed to take forever. Should I wave one more time? Nah, just keep staring straight and act like you’ve been there before. I walked off with perfect posture, even though I was high-fiving myself and doing cartwheels in my head.

I kissed Lauren and we watched the rest of the show from backstage. I could finally smile and let my guard down. It had gone exactly the way I wanted it to go. 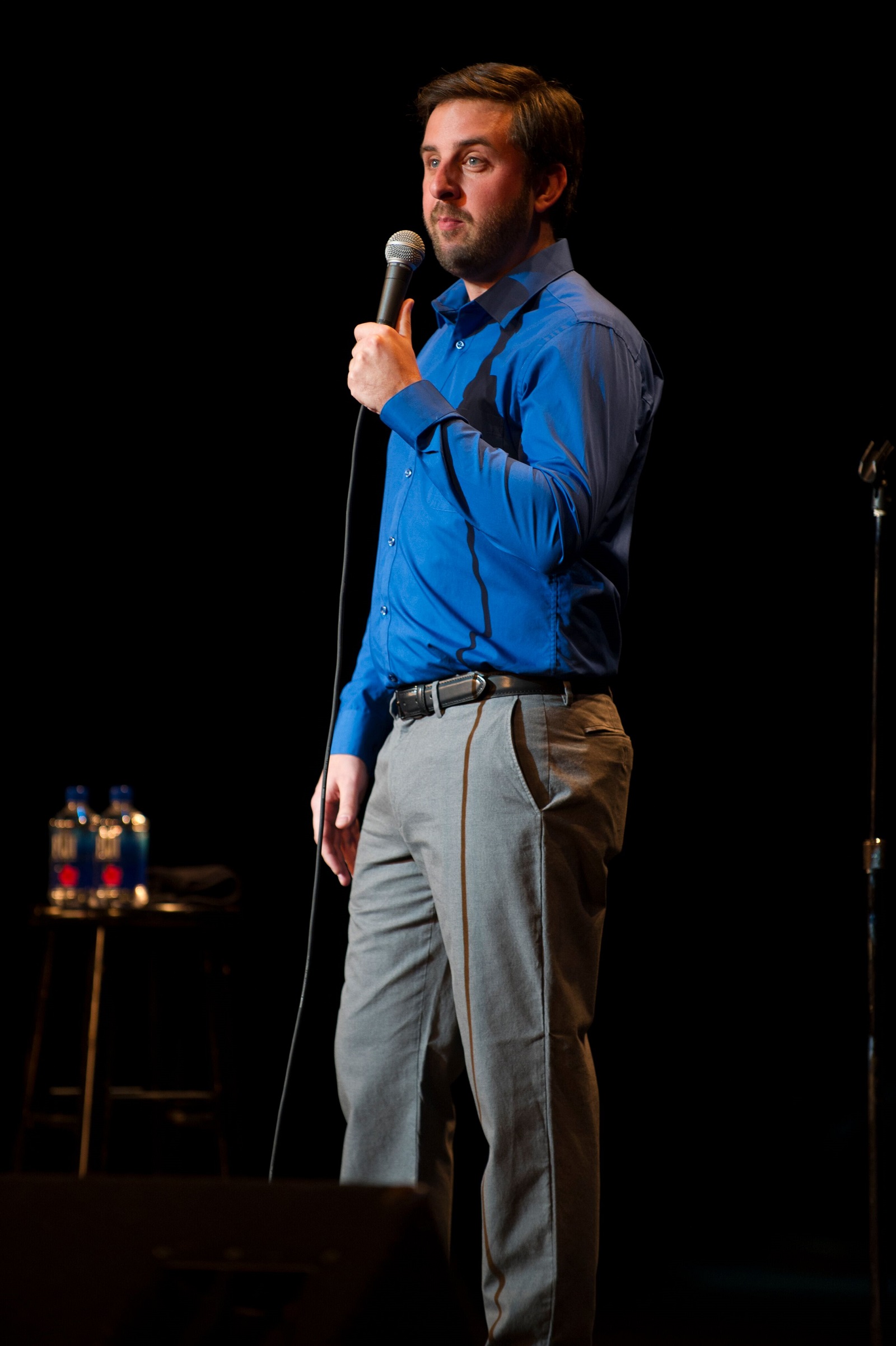 Brian Herberger on stage in Rochester in 2016.

A small part of me felt guilty. I wish I could have shared the stage with some of my Buffalo comedy friends. There are others who either also started comedy in Buffalo or still live here today that are as qualified, if not more so than I am, to perform on such a grand stage. On that particular night, I knew it had taken a lot of hard work, a little bit of luck, and I was grateful.

And then it was over. One minute you’re the most important person in the room to 3,700, and the next, you’re “Hey, isn’t that the opener?” But I was more than fine with it.

I get to stay in town for another week as I’m performing at Helium this weekend. It’s nice, because it gives me an extended opportunity to soak it all in. This has been a great experience for me, sharing these weekly articles. I pushed myself to open up in ways that normally only a few people see me.

If you wish to follow my story, I will continue to post weekly articles that you can find through my Facebook Page: Brian Herberger Comedy. “Like” my page and keep tabs on me there.

Find out about our new townhouse in Raleigh, my wedding that still has to be planned, and my tips for adjusting to life with a cat who wants to sit on your lap far too often.

For now, it’s back to weekends at comedy clubs a couple of times a month and figuring out what’s next. These theater shows, culminating with Shea’s in Buffalo, are the apex of my comedy career so far. Now the real work begins.

On Saturday night, I stood at the top of a mountain that took me 15 years to climb, and while up there, I discovered there are mountains as far as the eye can see, each one worth the seemingly endless journey.

I don't want to get all philosophical and introspective; this is comedy after all. But stay tuned. This ride is only beginning.

*Look back at Brian's stand-up journal:
- Part I: A funny guy from Buffalo tries to make it in stand-up
- Part II: Bad waffles, too much laughter and other tales from Albany
- Part III: Starting over every day and getting laughs from the Pledge
- Part IV: When life becomes a distraction from comedy
- Part V: Cats, burps, a fiancee and other comedy material
- Part VI: Small crowd, free Mookie and 40 shades of grout
- Part VII: Finding peace and solace at Wal-Mart, and not the beach
- Part VIII: Packing in comedy shows as a date with Shea's looms