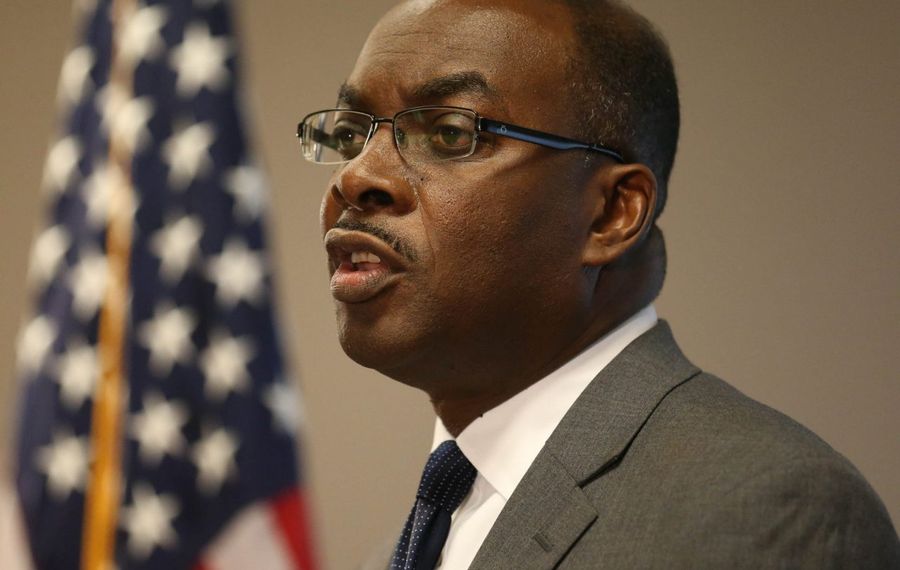 Mayor Byron W. Brown is not taking a public position on which location he would prefer to see a new Amtrak station built in Buffalo.

But comments that Brown, chairman of the train station site committee, made to The Buffalo News Editorial Board on Tuesday suggested steep challenges for the Central Terminal as the location.

Meanwhile, Assemblyman Sean Ryan, D-Buffalo, sent a letter to the Erie Canal Harbor Development Corp. calling on it to withdraw Canalside as a potential location for the train station. An undeveloped area where the Buffalo Memorial Auditorium once stood is one of the downtown areas under consideration.

"There is nothing in their master plan about a train station," Ryan said, citing a plan last updated in 2013.

He warned of "years of delays" that would "harm the progress we have seen at Canalside."

Ryan favors putting the train station at Central Terminal, which he said would be a "major stimulus for Buffalo and Western New York."

The mayor cited several discoveries by an engineering consultant not in the East Side landmark's favor. He noted preliminary cost estimates announced last week, which determined it would cost far more to return train travel to the Central Terminal than keeping train service downtown.

The cost estimates for a downtown station range from $34 million to $86 million. That's considerably less than the $68 million to $149 million estimated for the Central Terminal.

"If you have $25 million and you have to build a $34 million station, in the short term it's a lot easier to go up to $34 million than to go up to $68 million," Brown said. "That's a pretty significant jump. We are in an area where budgets are still incredibly challenged."

Robert Shibley, dean of the University at Buffalo School of Architecture and Planning, and the committee's facilitator, and Mark Tytka, lead consultant for WSP Parsons Brinckerhoff, the engineering consultant, also spoke at the meeting.

The mayor said the consultant determined it would take "at least two years longer" to get a train station up and running at Central Terminal than at downtown. And Brown said the return of Amtrak service to Union Terminal in Cincinnati and at a few other train stations that regained service occurred only after other development.

"Economic activity was already underway, and partial train service was restored," the mayor said. "None of these examples that are out there suggest adding train service prior to a development plan will spur the growth of an area. That is the factual information we have been able to look at. It's not emotion or opinion-based, but fact-based."

Higgins on Monday said he didn't think the consultant's cost estimates are valid, and he questioned the 17-member committee's integrity.

The mayor took exception to that, saying the committee had conducted itself in an impartial and transparent manner.

"That's absolutely, totally inaccurate," Brown said. "All of the meetings have been public. Every member of the committee has been invited to participate ... and the congressman has had a staff member at every single meeting."

"We certainly respect Congressman Higgins' position, we respect his passion for a location and I think all of us on the committee would like to see the historic Central Terminal restored," the mayor said.

"But really, the charge we were all given – those of us who agreed to serve on the committee – was not to advocate for one site or another. I don't think you see any other members of the committee publicly advocating for a position."

Central Terminal vs. Canalside: Where to put a new Buffalo train station?

The mayor also said that because Central Terminal is located in a busy rail yard and the tracks are owned by CSX, the freight railroad, expensive track realignments would be necessary before passenger service could be restored.

"That is something else factually, not emotionally, that has to be taken into consideration in looking at that site," the mayor said.

Brown also noted that while comments were running for the Central Terminal two to one, most were from people outside Buffalo.

"They were primarily based on nostalgia, the beauty of the building and the fact that many people see it as an architectural masterpiece," Brown said.

In contrast, speakers at a January public meeting were split roughly 50-50, he said.

"It should also be noted that several downtown business owners, major entertainment, hotel tourism and stakeholders, not advocates, all expressed a preference for downtown," he said.

The committee plans to announce its decision in April.