The Buffalo Sabres have won three of their last four games while the Florida Panthers are coming off Saturday's 7-0 destruction of the Chicago Blackhawks. For two teams who are likely to miss the playoffs, it still makes for an interesting meeting Monday night in KeyBank Center.

The Sabres are 1-0-1 against the Panthers this season, with Anders Nilsson posting a 33-save shutout here in a 3-o win on Oct. 29 and Robin Lehner taking the loss in a 4-3 shootout defeat Dec. 20 in Sunrise.

Here are Five Things to Know about tonight's game:

1. Milestone mania: There will be a pregame ceremony to honor Sabres captain Brian Gionta for his 1,000th game. It will be the 700th game for Panthers forward Shawn Thornton and the 200th for Florida defenseman Mark Pysyk, the former Buffalo No. 1 pick traded last June for Dmitry Kulikov. 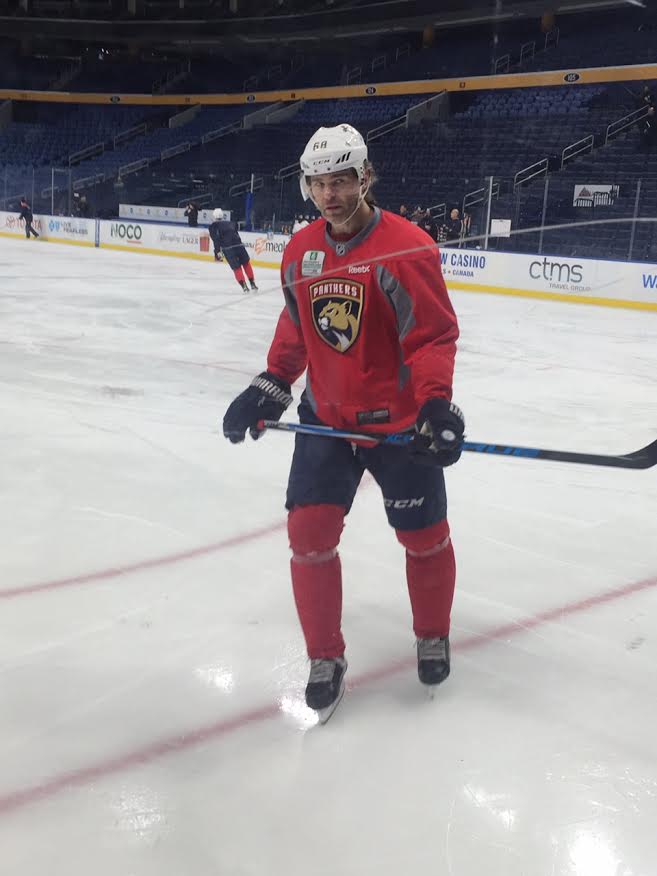 2. Jagr answers the bell: It will be the 1,704th game in the career of ageless Florida forward Jaromir Jagr, fourth on the all-time list. Jagr was questionable after suffering an upper body injury Saturday but took the morning skate fully and will play. He has 14 goals, 27 assists and a plus-11 rating this season, and 107 career points in 89 games against the Sabres (46-61).

Jagr enters the game with 763 goals, 1,146 assists and 1,909 points in an incredible career that dates to 1990. He's second all-time in points (behind only Wayne Gretzky's other-wordly 2,857), third all-time in goals (behind only Gretzky and Gordie Howe), and fifth in assists.

4. Old faces in new places: Pysyk has four goals, 11 assists, a plus-1 rating and is one of three Panthers defensemen to play in all 74 games this season. In addition to Pysyk, the Florida lineup features longtime former Buffalo winger Thomas Vanek, who was acquired at the trade deadline from Detroit. Now 33, Vanek has 16 goals and 30 assists this season but just one goal and seven assists in 12 games for the Panthers.

"I was surprised actually how great of a setup it is in Florida to be honest with you," Vanek said today. "You hear how nice it is to live there away from the rink. But everything at the rink and how the players get treated, it's really been an eye-opener how great it is there."

Vanek will be heading into free agency this summer, and said both Detroit and Florida would be high on his list for a new deal going forward. The Panthers are his fifth team since the Sabres traded him to the Islanders for Matt Moulson in 2013.

5. Special teams battle: After going 2 for 2 Saturday against Toronto, the Sabres are back to No. 1 on the NHL power play charts at 24.5 percent -- including a sparkling 27.7 percent at home. Florida, meanwhile, is the league's top penalty killing unit at 86.1 percent. The Panthers killed off all three penalties Saturday against Chicago and are 12 for 14 the last six games.

"Staying out of the box would be first and foremost our goal," said Pysyk, one of Florida's key PK blueliners. "Obviously there's going to be some power plays. There's lots of skill over there and obviously you need to take away the time and space from guys like Eichel and 'Ryno' [Ryan O'Reilly] in front. It will be a good challenge for us."