Months before any trial begins, State Sen. Robert G. Ortt already is mounting his defense against the felony election law charges lodged against him last week.

And he is squarely aiming at his accuser – state Attorney General Eric T. Schneiderman – and the “politics” that the North Tonawanda Republican claims spawned the “ridiculous and baseless” accusations against him.

“I have no doubt the only reason I am involved in this case – I was a part of this investigation – is to make it more politically appealing and further Eric Schneiderman’s partisan agenda,” Ortt told reporters minutes after he and former Sen. George D. Maziarz were arraigned in an Albany court room on Thursday.

After more than two years of investigation, the Democratic attorney general contends Ortt and Maziarz maintained pass-through campaign accounts that financed no-show jobs. Schneiderman called it “a shameful breach of the public trust.”

“New Yorkers deserve full and honest disclosures by their elected officials — not the graft and shadowy payments uncovered by our investigation,” he said.

But Ortt has assumed full attack mode. He hired politically experienced Mercury Public Affairs to advance the partisan theme and highlight his distinguished military record. The former Army lieutenant was awarded a Bronze Star in Afghanistan.

He also retained Stephen R. Coffey, one of Albany’s best known criminal defense attorneys, to represent him in court.

Now his team says Schneiderman – a former Democratic senator from Manhattan’s Upper West Side – is attempting to alter the balance of power in the Senate, which Republicans control with the help of breakaway Democrats.

They suggest that Ortt’s potential absence could affect budget votes later this month and threaten the fragile GOP-dominated majority. 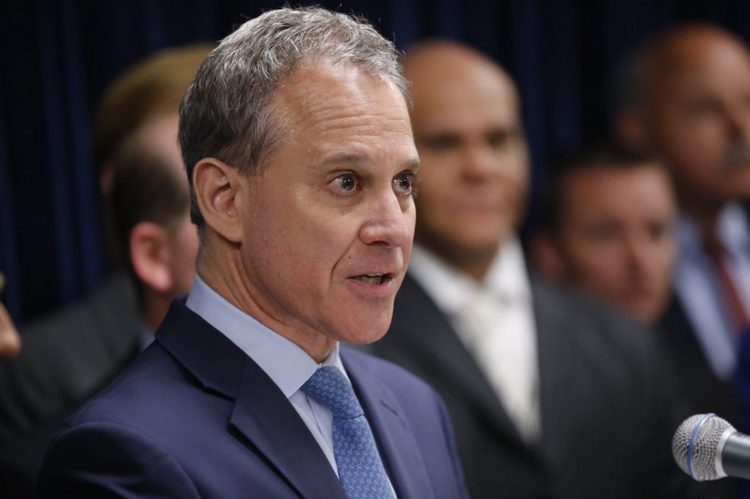 State Attorney General Eric Schneiderman says his office began investigating the Ortt-Maziarz case after receiving a referral from the State Board of Elections. (Derek Gee/Buffalo News)

One source close to the senator questioned why Schneiderman granted immunity to Assemblyman Michael J. Norris, R-Lockport, in exchange for his grand jury testimony on March 9. Norris headed the Niagara County Republican Committee at the time of Schneiderman’s 2012-2013 scrutiny, the source said, and may have more appropriately drawn investigators’ attention – especially since party funds are key to the case.

But Norris serves in the Assembly where the GOP has no chance of achieving a majority.

“He could have gone after Norris the assemblyman. But who cares?” the source said. “Going after a Republican senator? That matters.”

And Ortt’s supporters point to previous GOP complaints of politically motivated actions from around the state, hinting that Schneiderman is trying to build a corruption-busting resume to someday run for governor.

[RELATED: 'I am guilty of nothing': Ortt pleads not guilty to election law violations]

“Growing up, we were told that regardless of our political views or party, America treats us the same under the law,” said Andrea Bozek, the Mercury spokeswoman for Ortt. “What’s sad is that so far this Democratic attorney general’s primary goal is flashy headlines and political retribution, not equal justice under the law.”

Bozek added that Schneiderman’s political motivations will “absolutely” be part of his defense at trial.

Ortt’s argument so far “sounds like something an indicted politician would pay a public relations firm to say,” Schneiderman spokesman Eric Soufer said.

“These charges were the result of a joint investigation by this office and the FBI,” Soufer said. “We will let the facts of this case speak for themselves and look forward to proving our case in a court of law.

The Attorney General’s Office also notes that it began probing the Ortt-Maziarz case after receiving a referral from the State Board of Elections. And in the vast majority of cases, legal sources confirm that the attorney general can only pursue an election law violation with a referral from the board.

It is also expected that Ortt will claim he is not responsible for filing the “false instruments” – in this case campaign finance reports – that lie at the heart of the charges. Sources close to him say the attorney general is probing documents submitted by the Maziarz campaign and the Niagara County GOP, and that the senator had nothing to do with either.

Former Niagara County Republican Chairman Henry F. Wojtaszek offered that same argument while he was under investigation in the same case. He pleaded guilty to a misdemeanor election law violation on Wednesday.

Wojtaszek also maintained he had nothing to with filing any of the Maziarz or party documents, though legal experts familiar with such matters say the state would argue he acted as their “agent.”

Schneiderman alleges that Maziarz orchestrated a “multi-layered pass-through scheme” that enabled him to use money from the two committees. He is charged with funneling campaign payments totaling $95,000 over two years to a former Senate staffer who had left government amid charges of sexual harassment. Other sources have identified the staffer as former Niagara County Legislator Glenn S. Aronow, who also testified before the grand jury on March 9 and received immunity.

To conceal the payments — and to avoid public scrutiny of his decision to retain the former staffer for campaign-related work — Maziarz and others falsely reported the expenditures on five separate filings with the New York State Board of Elections, the state contends.

They were illegally disguised as payments to pass-through entities, rather than to the staff member, the attorney general’s papers say.

The indictment also alleges that, in order to make up for a $5,000 reduction in annual salary when he was elected mayor of North Tonawanda – he previously served as city clerk and treasurer – Orrt and others devised a pass-through scheme to pay his wife for a no-show job.

Schneiderman contends Meghan Ortt received approximately $21,500 from 2010 to 2014 as part of the scheme, falsely reported as payments to a pass-through entity.

The attorney general also claims Ortt failed to include his wife on forms filed by the Niagara County GOP Committee. She worked in conjunction with the committee during 2012 and 2013 as a graphic designer, and was one of at least five local people subpoenaed by Schneiderman to appear before the grand jury on March 9.