For hundreds of young women in Western New York, the Gowns for Prom program is all about the dress.

Each year, Colvin Cleaners collects thousands of donated dresses and displays and distributes them free to high school girls April 4-6 on the stage at Shea's Performing Arts Center.

The dresses chosen by the girls are professionally altered, dry cleaned and delivered to the girls. The goal, according to Colvin Cleaners, is to make sure "every young lady in Western New York has a gown for the prom." 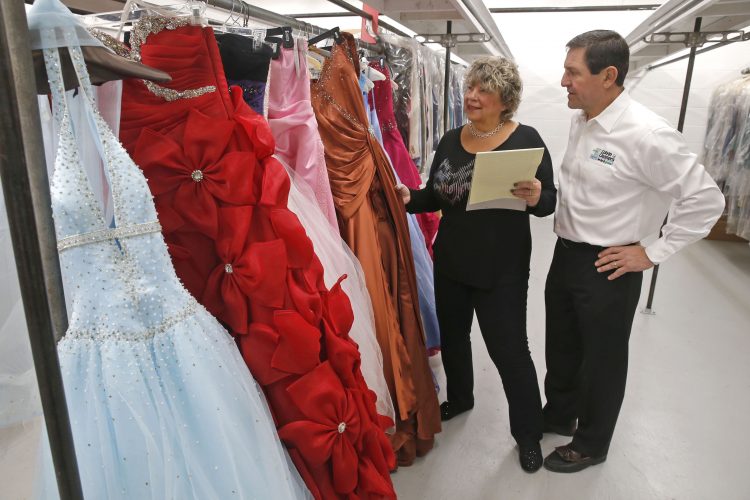 But for Paul Billoni, the owner and president of Colvin Cleaners and his wife, Cyndee Billoni, the 12th annual campaign is about much more than a dress.

"We just feel very fortunate to have what we have. To be able to help people that are in need puts a smile on our faces," said Paul Billoni. "My mother always taught us, 'You get so much by giving.' It's something I learned at a young age."

"There's a couple times a day that we are in tears because people are just so appreciative," said Cyndee Billoni, who said they've seen the need for the dresses increase in the Buffalo area.

This year, Colvin Cleaners expects to have 3,000 or more dresses available.

Dresses, as well as shoes and purses, are being collected through March 31 at Colvin Cleaners, 2375 Elmwood Ave., as well as at 39 Allstate Insurance agency locations and at other participating sponsors across the area.

More than 1,000 girls from 60 schools are expected to be given a dress this year, and the Billonis try to make each one feel special.

When a high school student arrives at an appointed time at Shea's, she is brought onto the immense stage and left among the racks of gowns to pick out and try on as many dresses as she would like. Once the girls have chosen a dress they are taken backstage to the Shea's dressing rooms, where professional seamstresses transform the chosen gown into the perfect dress.

Cyndee Billoni said they continue to bring in new dresses,  from 3 to 8 p.m. over the three-day period, so that the last girl on the last day will have just as many choices in just as many sizes as the first girls to arrive.

Girls who can't afford to purchase a prom dress can make arrangements through their schools to be part of the dress giveaway or may sign up online on the Gowns for Prom website. Seamstresses and tailors who would like to volunteer may also contact Gowns for Prom through the website.

In addition to the donated used dresses, Gowns for Prom gives away new dresses from participating stores and shoes and purses.

One volunteer, Marlena Gagner, has been working with the Billoni's for 10 years, providing beaded jewelry and also repairing beading on used dresses. She provides 500 each of beaded earrings sets, bracelets and necklaces.

Gagner told the Billonis that she was "one of those kids" who couldn't afford a dress and her mother used drapes to make her one.

"Talk about 'Gone with the Wind,' " laughed Cyndee Billoni. "She's awesome with the girls and helps them find the perfect piece for that dress."

Paul Billoni said his family's dry cleaning business was struggling when he was growing up. Just a few relatives, plus his mom and dad, ran the shop. But he said the family still donated to their church and volunteered in the community.

A 1974 graduate of Kenmore West, Billoni was elected to be a Village of Kenmore trustee in 1981, the youngest ever elected to that position. During his 14 years on the board he led the charge to build the community center in Mang Park, across the street from Colvin Cleaners.

His business now has 73 employees, with 13 trucks that pick up clothing  across Western New York, as well as a fire restoration and drapery businesses. The Billonis' son, Christopher, is vice president, the third generation to work in the family business, which Billoni's uncle founded 86 years ago.

Colvin Cleaners has also organized a Coats for Kids program for the past 21 years, distributing over 80,000 coats in that time, and also cleans and tailors suits for Veterans One Stop.

"He flies under the radar and what he gives that no one will ever see is absolutely amazing. I know my folks are smiling down with immense pride," said Michael Billoni.