Leaders at the City Mission in 2014 unveiled a dream expansion that would have tripled the size of its East Tupper Street headquarters and created room for 184 emergency shelter beds.

But after three years of fits and starts, the project didn't get off the ground.

Now, the City Mission is pursuing a scaled-back, $15.1 million plan to construct a four-story complex and demolish the outmoded building in which it has operated since 1984.

The new building at 90 East Tupper would include expanded dining and sanctuary spaces, an on-site medical clinic, an 82-bed emergency shelter and 52 "transitional supportive housing units," as well as classrooms and offices.

The proposal to demolish the existing building is a major change from the initial $31.5 million proposal, in which the City Mission would have retained and renovated the current 40,000-square-foot building, alongside the new one, for a total of about 120,000 square feet.

That's because the City Mission failed to obtain some state funding it had been seeking, and lacks sufficient dollars to pay for the full project. So rather than continuing to pursue that path, officials decided "to reduce the scope to get it to something they can self-finance or raise money to do," said architect Paul R. Lang of Carmina Wood Morris PC.

The new proposal calls for a 74,138-square-foot facility built on the current parking lot. Once complete, after about 18 months of construction, the existing red-brick building will be razed to make room for parking, outdoor dining areas, enhanced donation drop-off space, green space and landscaping around the client and employee entrances, according to documents submitted to the city Planning Board. 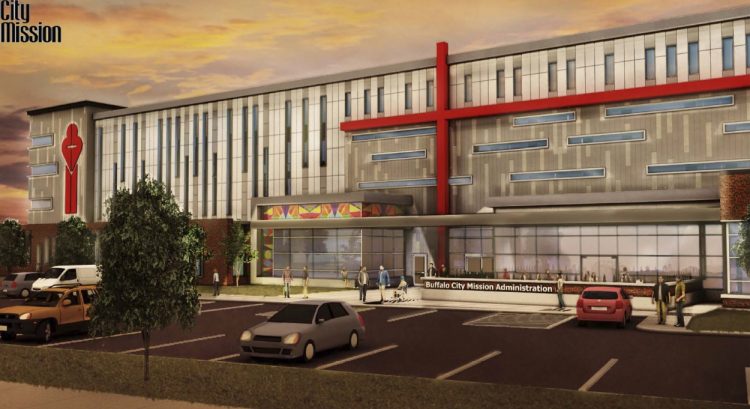 The agency is working with McGuire Development Group on the effort.

The City Mission's original proposal, which was introduced in 2014 and initially approved in early 2015, was already extended once as officials sought funding, and the Mission next week will ask the Planning Board for another extension. Now, though, the smaller project "eliminates some of the concerns and extra costs of renovating the existing shelter and the logistical issue of finding a temporary home for the Mission during construction," Lang said.

Stuart Harper, executive director and CEO of the City Mission, declined to publicly discuss the new plan until after it is aired at a Planning Board meeting on Monday.

Founded in 1917, the City Mission Society Inc. provides housing and other services to homeless men, women and children, but the scope and expectations of services have grown dramatically, "leaving the current facility dated and the Society incapable of completing their mission," Lang wrote in a letter accompanying Planning Board documents. The nonprofit organization tried to address the needs of women and children when it completed its new Cornerstone Manor, but was still limited in what it could do for men.

The Mission previously looked at relocating, given the newfound attractiveness of its downtown home for potential redevelopment. But they abandoned the idea of moving from the 1.41-acre site because of logistical concerns, client needs and neighborhood opposition, deciding instead to stay where they are.

"It's an ideal location for the clients and their services," Lang said. "It's just a matter of making the facility meet modern desires for homeless care."

The inside of the new building will include expanded dining and sanctuary spaces, an on-site medical clinic on the first floor and space for new client registration and "triage," according to Lang's letter to the Planning Board. The second floor will house the 82-bed emergency shelter and related support services, while the third floor will contain 52 "transitional supportive housing units." The agency's administrative offices, as well as offices for partner agencies, will occupy the fourth floor, along with classrooms to provide an expanding educational curriculum for residents.

The previous proposal had as many as 184 emergency beds and 68 housing units. The current facility has 153 beds and room for 90 emergency shelter cots, but with little or no privacy.

The building facade will feature a cement-like rainscreen system, panels and some brick, with tall and narrow window slits along the white and gray front. A brick wall along the front of the building will feature the organization's mission statement in white lettering, while the Mission's red logo and a giant cross adorn the building face.

Parking will still be a temporary problem during construction. McGuire is working with the Mission to arrange for parking in lots controlled by the developer or partners to handle the needs of the agency's administrative staff and "personnel that have to be there on a daily basis," Lang said.

The project will be funded from both public and private sources, relying particularly on City Mission's existing resources and donors, Lang wrote in the letter.

"We and our partners are excited about this project and the role the new facility can play in reaching Buffalo City Mission's goal of ending homelessness in Buffalo," Lang said in the letter.

The project, which Lang said was designed according to the new Green Code, will be considered by the Planning Board on Monday. Officials hope to start construction by contractor R&P Oak Hill in August and finish by November 2018.