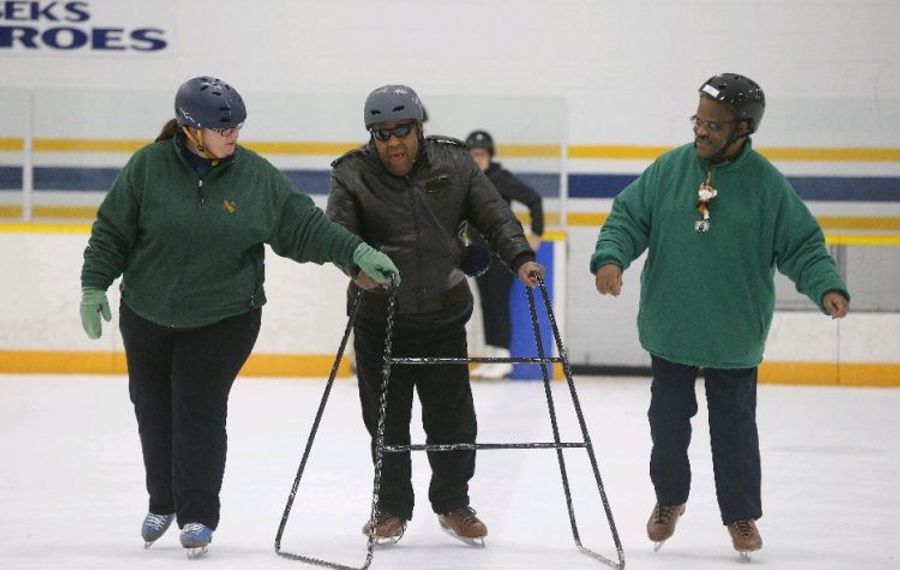 In many ways, Paris Adams and David Tyler represent the heart and soul of SABAH – Spirited Athletes Bold at Heart.

Tyler’s never met a person he couldn’t compliment. “Is that the beautiful Sheila?” he always asks in greeting Sheila O’Brien, the skating association’s executive director.

It doesn’t matter that Tyler’s been totally blind since birth.

Adams also has an infectious, magnetic personality. Last summer, while coaching a kickball team of young professionals, his pep talk inspired the team to a tournament championship. And his strong speaking skills have led him to address both the New York State Legislature and hundreds of people attending SABAH’s annual fundraiser last year. 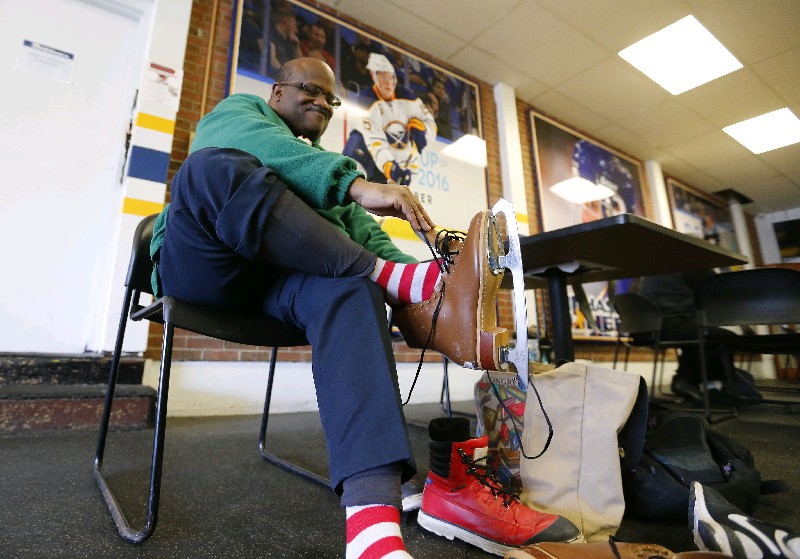 SABAH skater Paris Adams puts on his skates getting ready for practice at the Riverside rink in Buffalo, (Mark Mulville/Buffalo News)

“They are both so thoughtful and kind,” O’Brien said. “They are two of the sweetest men.”

Adams and Tyler also personify an important new trend, as people with intellectual disabilities who are living longer. The challenge is the same as with any aging people, to keep them active and physically fit as they approach their senior years.

O’Brien called them her “super seniors.”

As the association prepares for its 40th annual ice show, “Fabulous at 40,” at 2 p.m. Sunday in KeyBank Center, the show’s title could have a second meaning, referring to the skaters’ advancing ages. SABAH officials say 14 percent of their 660 skaters are 35 or older.

“Over the last 10 years, we’ve consciously gone out to the day-treatment programs and group homes to increase the number of older adults in the program,” O’Brien said.

“There is a hole in services for adults with disabilities – recreational programs, anything to do with physical fitness,” she added. “I think in the past it’s all been based on providing the necessities for life – food, housing and medical, which are all necessary. But the quality of life was lacking.”

These disabled people clearly are living longer. Precise figures are hard to find, largely because there are so many sub-groups of people under the umbrella of “intellectual disabilities.” But one such group has startling statistics. Life expectancy for people with Down syndrome has increased dramatically – from 25 in 1983 to 60 today, according to the National Down Syndrome Society.

Interviews with people with intellectual disabilities often are a challenge. Some have poor communications skills, while others are too shy to discuss their disabilities.

With Adams and Tyler, an interviewer’s challenge is to bring a large enough notebook.

“They’re bright, they’re engaging, they’re funny, and they want to be active,” O’Brien said of the pair, who skate at Riverside Rink and will skate in the “marching band” skit on Sunday. “These two are the superstars of our senior set.”

Adams, who has a mild intellectual disability, is so talkative that he even made an unintentional “butt call” to O’Brien after she asked him to be interviewed for this story.

“It’s always been a dream of mine, to be in The Buffalo News,” he was overheard crowing to a co-worker in the Assigned Counsel Program of the Erie County Bar Association.

It didn’t take much prodding for Adams to recount his pep talk in last year’s inaugural Kickstock Kickball Festival. The team he coached was locked in a tight championship game when he called a timeout, sensing his team’s frustration.

“Listen, I know you’re frustrated,” he recalled telling the young professionals. “I’m frustrated, too. Eye on the prize.”

His inspired team, of course, kicked its way to a 5-3 win. And a photo shows Adams beaming as he hoists the championship trophy with one hand and flashes the #1 sign with the other.

Tyler also has the gift of gab.

“I’m one of the oldest skaters here, but I don’t feel old,” said the 63-year-old, a 25-year veteran with the association. “As long as I have my health and can skate around every year, I don’t feel any different.”

How long does he plan to keep skating?

“For years and years more. It’s my favorite hobby. I love it.”

Tyler also was asked how a totally blind person can skate. He uses a walker and has a volunteer helping him.

“It was hard for me at first,” he said. “But when I learned, I learned fast, and I stuck with it. If I could do it, any blind person could do it.”

Skating every week and participating in the Adult Fit and Fun program in the spring and summer help keep him from being lonely and depressed, keep him in good shape and help him meet new people, he said.

It also gives him a large group of people to compliment.

“She’s beautiful,” he said of O’Brien. “I know that by her voice, the way she walks, the way she dresses and her whole personality.”

To which O’Brien replied, “I’m taking him on the road with me.”