Lyme disease is called “the great imitator,” because its symptoms – which can include severe headaches, joint pain and swelling, fainting spells, heart palpitations and the flu – mimic those of other conditions.

It helps explain why medical professionals feared that landscaper Chuk Roll of West Seneca had cancer, lupus, multiple sclerosis and reactive arthritis before he was diagnosed in the fall of 2013.

“The testing was a nightmare,” said his wife, Rebecca. “I felt like I had a 95-year-old husband. Within 35, 40 days, he had 121 vials of blood taken. There were MRIs, spinal taps and urine cultures – and that’s nothing compared to what most people have been through.”

The Rolls, 38-year-old high school sweethearts who are married and have two children, solved their mystery within several weeks. Many see dozens of doctors, undergo hundreds of tests, and wait years for a diagnosis, the Rolls said, and suffer chronic, debilitating symptoms as a result. 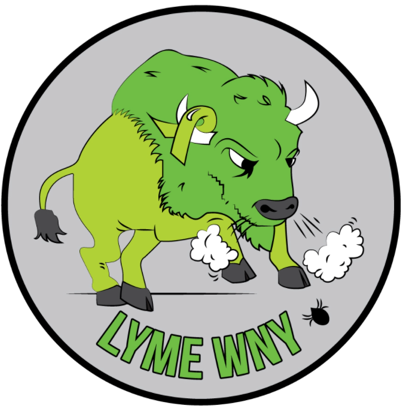 It’s why the couple and other families touched by the tick-borne disease started the Lyme Support Group of Western New York (facebook.com/LymeWNY) last April.

The group will host a Stomp Out Lyme Walk from 9 a.m. to 12:30 p.m. Sunday, March 26 in the Walden Galleria Mall in Cheektowaga. Register on the group’s Facebook page or Event Brite, or in person at 8 a.m. Sunday in the hallway alongside the Melting Pot.

Cost is $25 and includes a T-shirt, music, food and refreshments; mall-goers are welcome to participate in a related auction during the event.

Symptoms of Lyme and chronic Lyme diseases also can include neck stiffness, heart palpitations and lightheadedness. Ticks about the size of a poppy seed carry the pathogens than cause illness, but only one in four diagnosed with the condition remember being bitten, the support website lymedisease.org estimates.

Matchbox 20 lead singer Rob Thomas and his wife, Marisol, traveled the world for years trying to find answers to her debilitating illness. She learned last August that she has late-stage, chronic Lyme disease. Rob Thomas has donated a signed guitar to the Sunday event. "It shows you can have all the money in the world and still get misdiagnosed," Rebecca Roll said.

There were 765 cases of Lyme disease reported in the nine counties of Western New York from 2000 to 2015, according to the federal Centers for Disease Control and Prevention.

Monroe and Erie counties reported 350 and 174, respectively, much larger than the counties near them.

The CDC says that roughly 30,000 cases are reported annually – but the agency estimates the actual number of cases at 10 times that, maybe more.

Testing can be unreliable – it takes several weeks for the bacteria to be detected – and CDC guidelines for testing are several years old. Meanwhile, the number of reported cases has grown during the last three years, mostly notably in the parts of the Midwest and regions closer to the Atlantic Coast in the Northeast.

"When this first happened to us, our whole world was turned upside down," Rebecca Roll said. "When we found out Chuk had Lyme, we thought, 'Thank God, we have an answer.' We found out that was just the beginning of a nightmare because of the challenges that we faced – that we still face – to get him treated.

"We're very fortunate we found out early, before it affected him neurologically. Unfortunately, he is the exception in the support group. Some of those with Lyme disease are so, so sick."

Proceeds from this weekend's walk will be used to help defray support group expenses, provide more educational material to the public and help some families with chronic, long-term Lyme disease, which is rarely covered by health insurance, the Rolls said.

The couple joined forces with Julia and Stephanie Szymanski, of Marilla, last spring after the four of them bumped into each other at Wegmans on Easter weekend. Stephanie, 20, who has Lyme disease, was in a wheelchair. They vowed to start a support group and launched a Facebook page within days.

As many as 40 people have come to monthly meetings. They've included people who think they have Lyme disease, those who have been diagnosed, and family members.

"It's been very therapeutic for those who have come, to know they're not alone," said Rebecca Roll, a first-grade teacher at Maryvale Primary School.

The next meeting will take place at 6 p.m. April 12 at Alton's restaurant, Seneca Street at Transit Road in West Seneca.

Established protocol tells doctors that Lyme disease can be treated and resolved with antibiotics given over 28 days – but there is disagreement.

One medical society, the Infectious Diseases Society of America (IDSA), regards Lyme disease as “hard to catch and easy to cure” with a short course of antibiotics, according to lymedisease.org. This society denies the existence of chronic Lyme disease.

In contrast, the International Lyme and Associated Diseases Society (ILADS), regards Lyme disease as often hard to diagnose and treat, and points out that "coinfections" of other tick-borne bacteria and parasites often complicate treatment.

“The quality of life of patients with chronic Lyme disease is similar to that of patients with congestive heart failure,” according to the website. “Doctors don’t agree about the cause of these ongoing symptoms. The primary cause of this debate is flawed diagnostic testing. There is currently no test that can determine whether a patient has active infection or whether the infection has been eradicated by treatment.”

LYME CAME OUT OF THE BLUE

The Rolls stepped into this uncertain world in August 2013, when Chuk Roll got a fever of close to 105 degrees.

"We knew something was wrong," his wife said. "He's a very active person, a very fit person … and never gets sick."

An emergency room doctor suspected a urinary tract infection, prescribed the antibiotic Cipro and Chuk's symptoms diminished for 10 days. They came back a couple of weeks later in the form of a low-grade fever and conjunctivitis in both eyes.

"I was having extreme joint pain, extreme headaches," Chuk Roll said. "I was completely fatigued."

Members of the regional Lyme disease support group have yet to find a doctor in the Buffalo area who will treat a patient for the condition beyond 28 days, the Rolls said, so Chuk Roll drives 2½ hours each way once a month to see a "Lyme literate medical doctor" in Pennsylvania.

"I was on antibiotics for almost three years," he said. "In October, I went off antibiotics and bought an infrared sauna, which some people with Lyme disease say helps. For me, it does seem to help. When March came, I started to get some symptoms back, so I took 10 days of amoxicillin. I still have symptoms – pain in my knees and my elbows – but not enough that they're going to stop me from doing my daily thing."

Others in the support group see such infectious disease specialists in the Tri-State region of New York City, where the number of reported cases is far greater than in Western New York. It can take more than a year to get an appointment with one of these doctors, the couple said, and cost several  thousand dollars out of pocket for treatment.

A physician assistant has attended recent local support group meetings, Rebecca Roll said, and is seeking a grant to help determine the nature of the Lyme disease challenge in Western New York and the best approach toward treatment.

What is the best approach to a diagnosis?

"Everybody in the support group would say, 'You have to be your own advocate. If you know that something's wrong, keep looking,' Rebecca Roll said. "I literally fought the doctors to get my husband diagnosed and treated. … At first, we were asked if we'd been to New Jersey or Connecticut, where it's more prevalent. No, it's here it's in Western New York."

She suggested doing a tick check on family members, including pets, not only if they have been in the woods, but to a park or anywhere outside. And she had this message for those who get diagnosed:

"There is help, and there is hope."