ALBANY – The Seneca Nation’s decision this week to stop paying the state more than $100 million a year in casino revenue sharing caught leaders in Albany completely off guard.

But on the Seneca territories, more than 300 miles away, tribal officials have known for months that this day was coming.

Seneca officials did not raise a grievance with the state in 2013 when they believed Albany was in breach of the casino agreement, according to one lawmaker, because the Senecas did not want to do anything to alert state leaders to an omission in the original 2002 casino compact and a subsequent 2013 deal.

Both agreements neglected to specifically require the Senecas to continue paying the state a portion of the slot machine proceeds from 2017 through 2023, when the compact expires, according to the Senecas and a state lawmaker.

That back story is just part of the intrigue over the furious round of calls Seneca officials made Wednesday to state leaders, notifying them that the Senecas’ revenue sharing payments from its three casino operations would cease March 31.

“Our obligation to the state has ended,’’ Seneca President Todd Gates said Thursday during a news conference at the Senecas’ Cattaraugus territory.

Seneca Nation president: 'Our obligation to the state ended'

The Cuomo administration Thursday insisted there is no gray area, and that both documents require the Senecas to make payments during a 21-year period that began in 2002.

But the administration declined to respond to requests to cite the specific clauses it bases its claim upon or to detail what steps it may take to challenge the Senecas’ claims.

Privately, people close to the Seneca Nation and a state lawmaker said the tribe has commenced a clever maneuver that surprised the state and will end up saving the Seneca Nation in excess of $700 million in revenue-sharing payments over the next seven years.

State Assemblyman Andy Goodell, a Jamestown Republican who represents the Seneca territories, said his reading of both documents is that the Seneca payments were set in stone for 14 years. Beyond that, he said, the documents are not specific.

“I’m just astounded that the state didn’t apparently include anything in the MOU,’’ Goodell said.

Gates said he had a “cordial” conversation with Cuomo on Thursday.

“There is a willingness to talk,” Gates said.

The two sides are required to use their “best efforts” to resolve the dispute and must agree to meet within the next two weeks. Those requirements are stipulated in the original 2002 compact.

Within 30 days, either side – in this case, it would be the state – can bring the disagreement to an arbitrator for a binding decision.

But the two sides must agree on the arbitrator and that process could wind up in court and take years to resolve.

“It’s important this be resolved quickly,’’ said Goodell, who has spoken with Gates about the dispute.

The Seneca Nation is not publicly stating if it wants something in return for the resumption of payments. Rather, it says that the tribe’s flow of money to Albany is stopping per the deal originally cut with Albany in 2002.

“It makes absolutely no sense at all,’’ John O’Mara said of the Senecas’ claims.

O’Mara was special counsel to former Gov. George Pataki and the lead negotiator during all the talks with the Senecas that led to the 2002 casino compact.

“We wouldn’t have negotiated such an arrangement that lets you pay and then lets them continue with the games with the Senecas not paying. You stop paying, you stop playing,’’ said O’Mara, who has been a district attorney, judge and is now with the firm Barclay Damon.

The 2002 compact was a 14-year deal. It would automatically continue for another seven years if neither side objected in some way. Neither side raised any such objection when the 14-year period ended last December. As a result, in December the seven-year clock started for the Senecas to enjoy operating casinos – exclusively – in a large portion of Western New York.

Three years before the seven-year renewal began in December 2016, Cuomo and the Senecas resolved in 2013 a different dispute over revenue sharing payments. But in that MOU, there was no specific language mandating that payments from the tribe to the state would last beyond December 2016, Seneca representatives and lawmakers say.

Goodell, an attorney, said his reading of both documents is that the Seneca payments were set in stone for 14 years. Beyond that, the documents are not specific.

The lawmaker said there could be other documents to make the state’s case – such as emails from subsequent Seneca leaders after the 2002 compact – but that he is unaware of any.

“There’s no reason why they couldn’t have put in the MOU a few words that state ‘at the same payment level,’ ’’ Goodell said of the administration.

Gates, president of the Senecas, was asked Thursday if the reason for the lack of payment language going forward was a matter of someone forgetting to put a line in an agreement or resulted from some sort of semantic interpretation.

“Not on our part,” Gates responded. 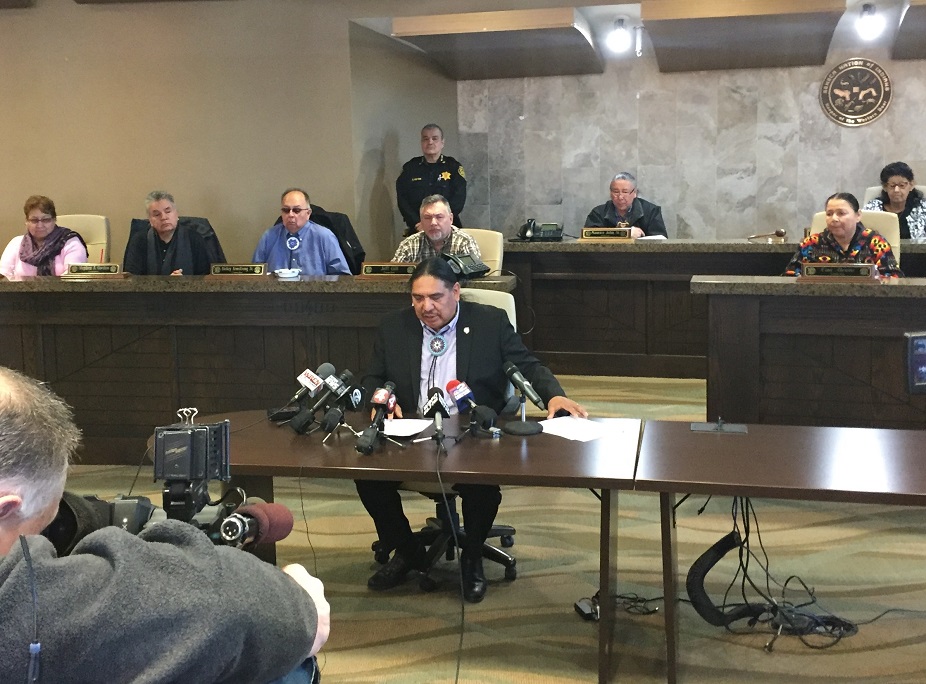 The governor may find his options more limited now than in 2013. At that time, Cuomo threatened to locate a casino in Niagara Falls near the tribe’s flagship casino if the Senecas did not resolve a revenue sharing dispute in which hundreds of millions of dollars was withheld over several years.

This go-around, he does not have the ability to make that threat.

The state in late 2013 OK’d the addition of seven new casinos in New York, with no additional casinos allowed until seven years after the license were awarded in 2015. It would take the Legislature to change that law to permit any other casinos before the seven-year clock expires.

In addition, given the saturation of casinos upstate, New York would be hard-pressed to find a private developer willing to place another casino in Niagara Falls, especially next to the Senecas’ tax-free casino, which also allows gamblers to ignore New York’s indoor anti-smoking laws.

Gates said the Seneca Nation of Indians is looking to make financial agreements directly with the three host cities of Niagara Falls, Buffalo and Salamanca. The Seneca Nation is willing to pay for government services for its casinos and to share a portion of revenue with the host municipalities.

Asked if state officials ever previously acknowledged that payments would end after 2016, Gates said “no.”

He said a final $30 million payment will be made by a March 31 deadline.

Thursday evening, Niagara Falls Mayor Paul Dyster said the city has been assured by the state the “payment structure put into place under the compact and the 2013 agreement is to be continued.’’ He did not elaborate.