Erie County Executive Mark Poloncarz deliberated on whether to show before-and-after photos of Ruth Murray as part of his press conference for a new measures to protect nursing home residents. In the end, he decided he could show the "before" photo -- taken one day before she was attacked -- but not the "after."

"Truthfully, they're too shocking to show in public," Poloncarz said.

Murray's family was initially kept in the dark about the attack and later told she suffered "minor cuts, lacerations and bruises."

Now, Poloncarz is pushing for a county law to require nursing homes to inform a designated loved one or guardian within an hour when a nursing home resident suffers an injury requiring hospital treatment. The proposed local law would also give the county's commissioner of senior services the ability to subpoena and review nursing home injury reports to ensure compliance. 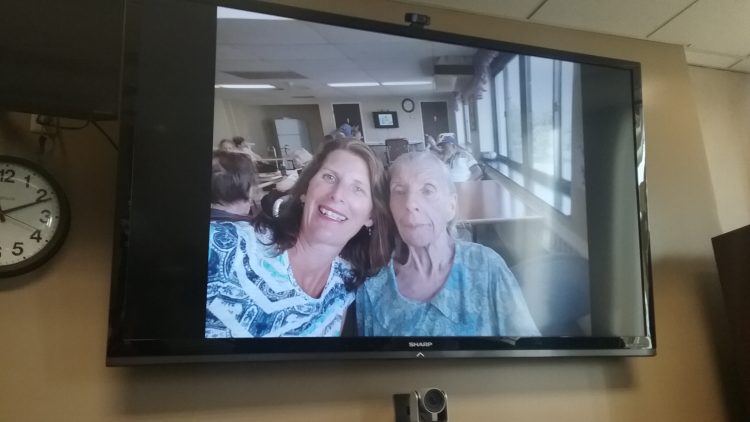 County Executive Mark Poloncarz displays "before" image of nursing home victim Ruth Murray, right, and her daughter, taken the day before Murray was beaten by a fellow resident.

The law would also give the senior services commissioner data on the frequency of altercations between patients, or between patients and staff, that result in injury. Data regarding serious injuries or deaths would also have to be provided.

The county executive called his family notification measure "Ruthie's Law" in memory of Ruth Murray, a nursing home resident who was killed last year. It will be submitted to the Erie County Legislature next week.

"No one should ever be deceived about a loved one's condition," Poloncarz said.

An 84-year-old man last August fatally injured Murray, an 82-year-old fellow nursing home resident, in a brutal beating after she wandered into his room in the dementia unit. Both were residents of Emerald South Nursing and Rehabilitation Center, 1175 Delaware Ave. near West Ferry Street, in Buffalo.

Emerald South sued over fatal beating of patient by another patient

Poloncarz is also partnering with Assemblyman Sean Ryan, D-Buffalo, to require nursing homes to pay a higher fine for procedural failures that result in a patient's death.

The maximum fine is currently $10,000, and without intervention from Albany, will fall to $2,000 next month, Ryan said. Higher fines are needed to prevent nursing homes from ignoring proper procedures and putting residents at risk, he said.

Also, the county executive signed an executive order creating a county website publicizing the rankings of nursing homes in Erie County. Though the federal Centers for Medicare and Medicaid Services publish rankings, which are also available through the State Department of Health, county residents can more easily whittle down that information by looking it up on the county website. That website, erie.gov/saferseniorhomes, went live on Monday.

The Department of Senior Services will distribute and share the online website information, said Commissioner Timothy Hogues. The county will also produce a "Know Your Rights" guide. For those who prefer to speak with a person, Hogues said residents can call the local New York Connects information line at (716) 858-8526 or even set up a personal meeting with a case manager.

"With the information these families receive, they can make a better choice," he said of nursing home options.

In the Murray case, an inspection at the Delaware Avenue nursing home in the days following the death of the woman found “the facility failed to provide adequate supervision to prevent accidents and ensure resident safety,” according to the state Health Department.

The Erie County District Attorney's Office, after consulting with Buffalo police, found that the assailant lacked the mental capacity both to participate in a trial and to form criminal intent in the killing of Murray. So he was not criminally charged.

Both Ryan and Poloncarz acknowledged that nursing homes are heavily regulated and suffer from serious financial pressures because of low reimbursement rates for care and staffing shortages.

"Nursing homes have been in a tailspin for over 20 years," Ryan said, resulting in "cut-rate care."

Concerning a separate incident, Ryan on Wednesday asked for an investigation into how a sex offender who targeted incapacitated and bed-ridden women became a resident in a Buffalo nursing home upon his release from prison.

Thomas Moore, 62, of Queens was moved into Waterfront Rehabilitation and Healthcare Center in late November. In January, Moore was arrested and charged with felony sexual abuse for allegedly going into a woman’s room, pulling down her blankets and molesting her.

Ryan said he wrote to the acting director of the New York State Department of Corrections and Community Supervision to find out how the decision was made to locate Moore at Waterfront Center and whether the facility and its staff were properly notified of Moore’s status as a level 3 predicate sex offender.

Ryan said Thursday that the Department of Corrections said it told the rehab center that Moore was a sex offender, but the center denies receiving that notice.

"We need to get to the bottom of who is telling the truth," he said. "I'm confident the answers will be coming."