To us, Darwin Martin is family.

One warm September day, we visited Graycliff, the summer home he commissioned from Wright in the late 1920s. Martin, who had overcome a poor childhood to work his way to the top of the Larkin Soap Company, intended Graycliff to be a place of calm for himself and his wife.

One brooding October day, exploring Forest Lawn Cemetery, we gazed on the Blue Sky Mausoleum, which Martin also paid Wright to design. Then we saw Martin's grave, a distance away. It was very modest. Martin lost all his money in the stock market crash of 1929. He died broke six years later, the mausoleum still not built. 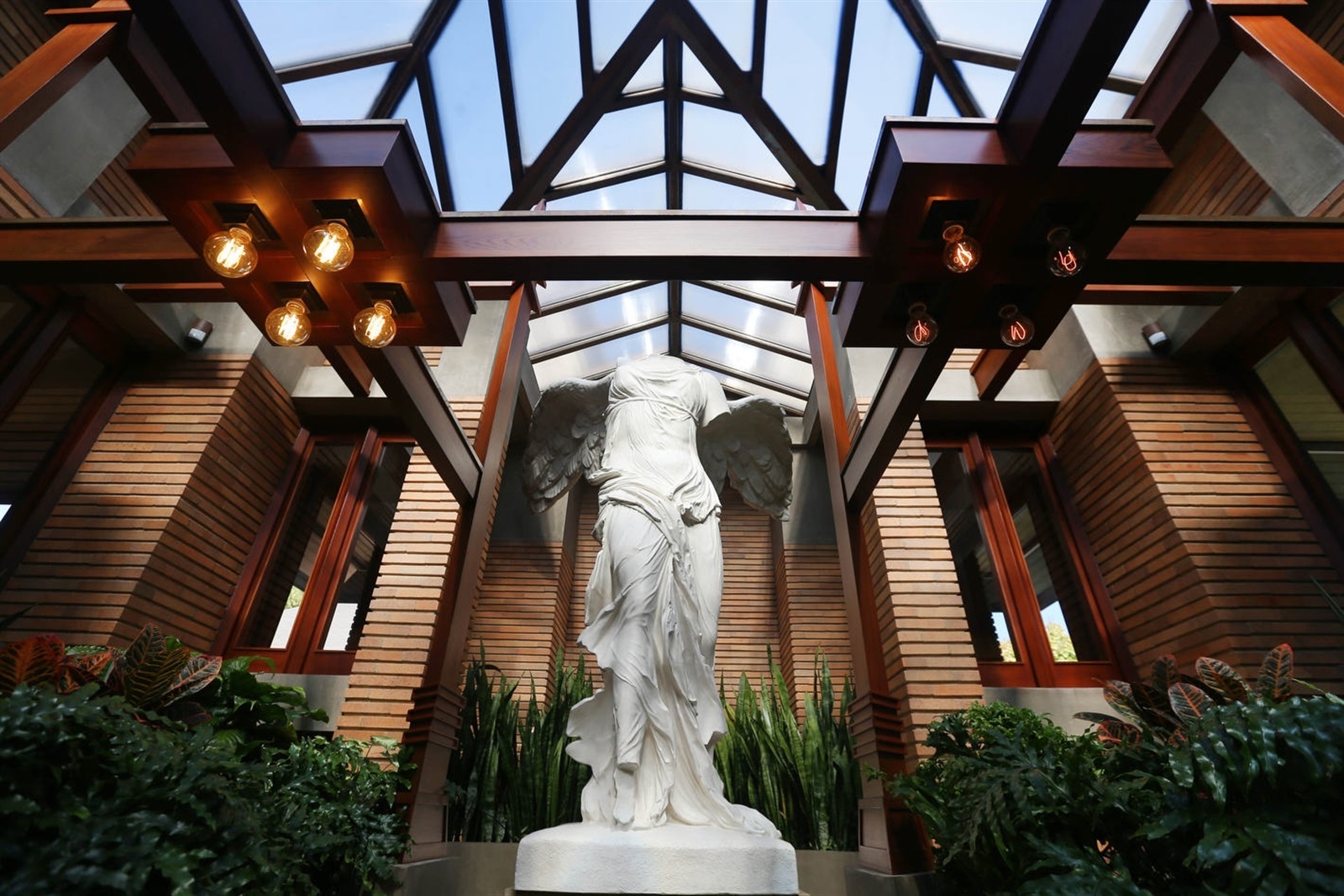 At the turn of the 20th century it was very popular to display classical sculptures. The replica of the famous sculpture "Nike of Samothrace" is the central focus in the conservatory. (Sharon Cantillon/Buffalo News)

Imagine Martin's life -- that spectacular rise, that undeserved fall. The thought can overwhelm you as you approach the greatest work we have that he commissioned from Wright, the estate at 125 Jewett Parkway known as the Darwin Martin House.

Built between 1903 and 1905, the estate is a complex. There is the main house, where Martin lived with his family for 30 years. The house has a conservatory, and a long breezeway connects the two. Nearby is the Barton House, where Martin's sister lived with her family. And there is also the Gardener's Cottage. The gardener's job was to provide fresh flowers every day, for every room.

Mick Jagger, who visited when the Rolling Stones were in town, got a private tour. But a public tour is a richer experience.

Two of us from The News found ourselves in a group that asked quality questions. Shirley and David Susan were avid Wright tourists from Madison, Wis., where Wright had his studio, Taliesin. Shirley Susan inquired about the kind of steel that Wright used. Laman Tasch, of Boston, Mass., was curious about Darwin Martin's descendants.

"Why didn't his children or grandchildren want this house?" she asked. The short answer was that they couldn't afford it. 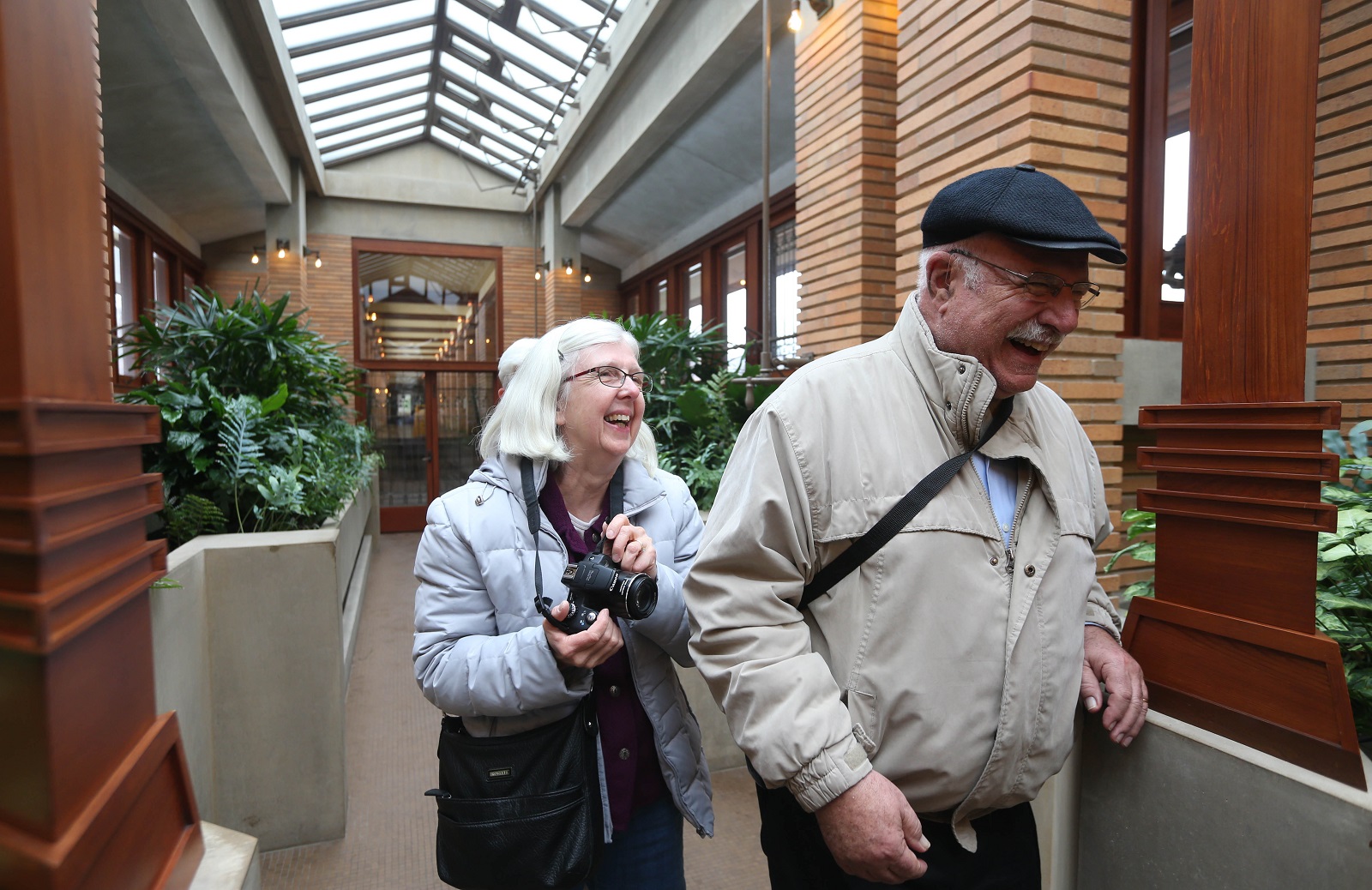 "Wright uses the colors of autumn," docent Jeri Mazur explained. "These colors are very warm." As we learned at Graycliff, it is perfectly normal to talk about the master as if he were still among us.

Lower ceilings make certain rooms seem intimate. Long horizontal lines, a hallmark of Wright's Prairie School style, suggest serenity. Wright thought of everything, you learn as you move through the house. He designed almost all the furniture, from the piano bench by the Steinway to the weird "I"-shaped dining room table. 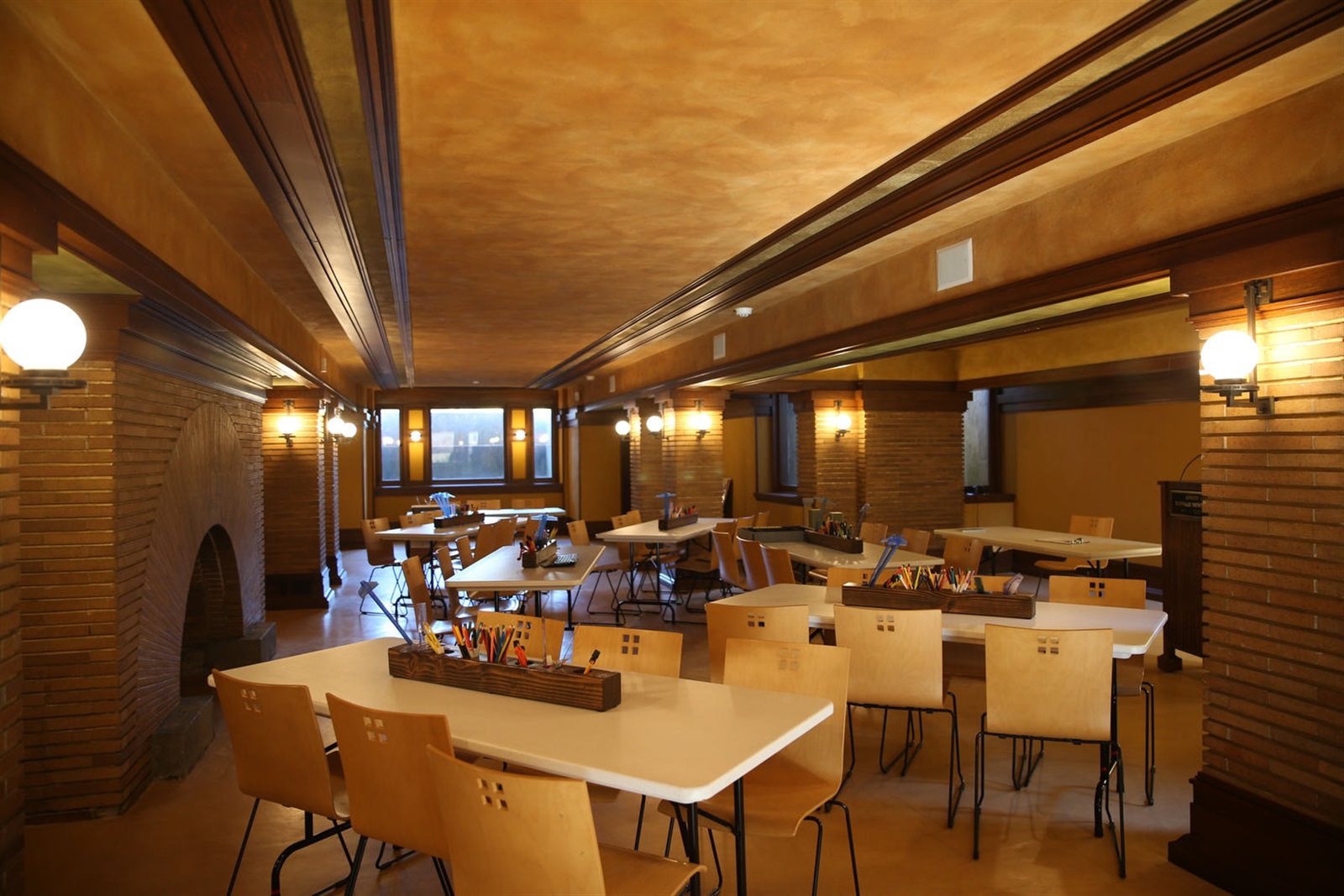 Not all his quirks quite work. Mazur, a former librarian, shrank from the idea of putting books in bookcases designed to hide radiators. "The heat would ruin their spines," she said. 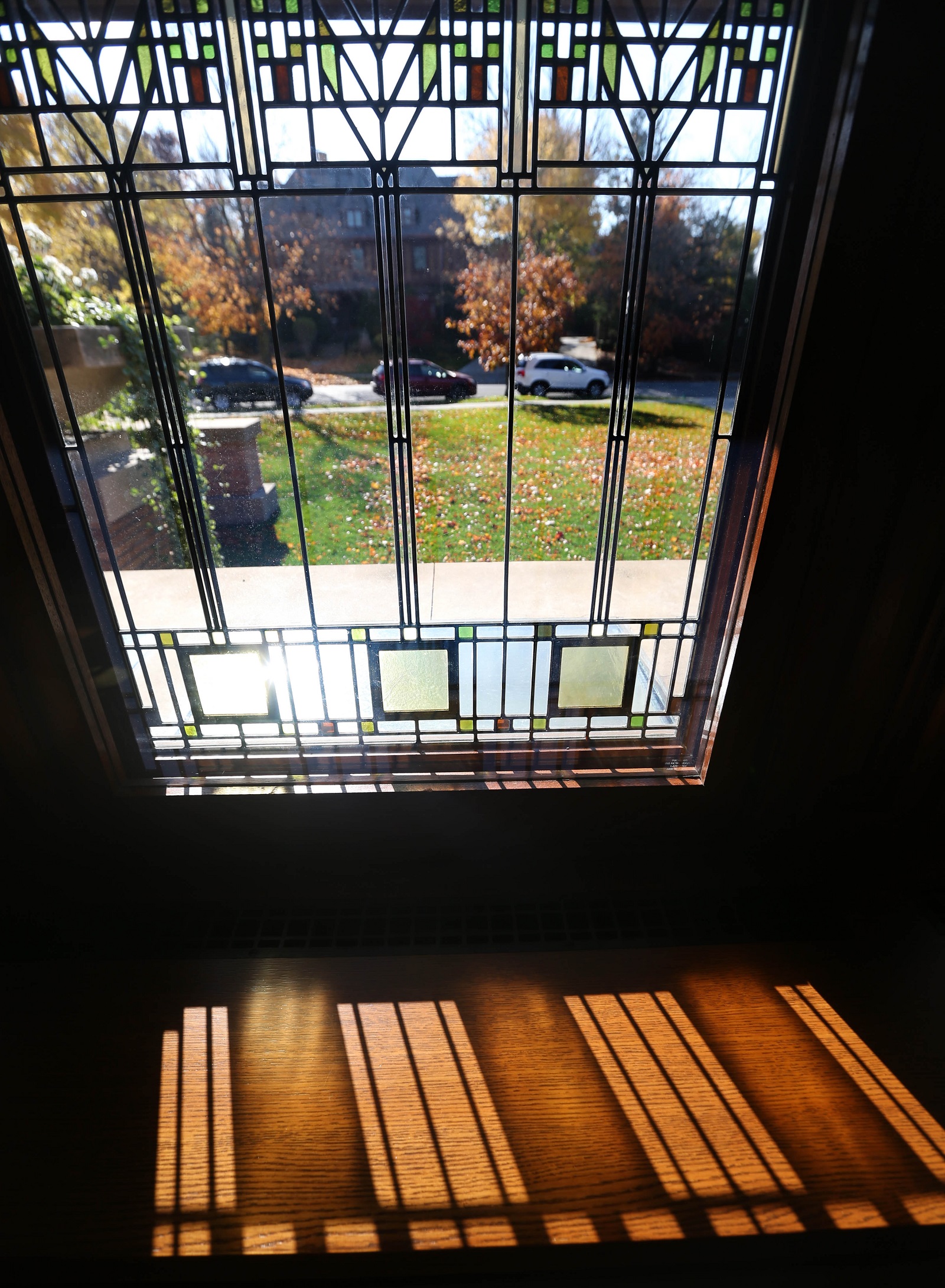 Abstract design of the tree of life light screens in the reception room was meant to accompany the view of the real trees outside, as well as making a beautiful reflection on the windowsill. (Sharon Cantillon/Buffalo News)

But often Wright was right. Matching globe lights throughout the house create a theme, and so do the iridescent, delicately beautiful windows.

Would you believe, 750 panes of glass went into one Tree of Life window? That was just one of many impressive figures Mazur reeled off.

Two Buffalonians, Brendan and Colleen Dowd, were taking the tour on the first day of a weeklong staycation. I felt as if I were on vacation too.

The house holds some amazing stories. In the kitchen, someone asked about the cupboards, and Mazur explained that Wright's original cabinets had wound up in another North Buffalo house.

One dramatic day, the homeowner came forward. "In case you're interested," she said, "I have Frank Lloyd Wright's original cupboards in my kitchen."

And so the cupboards came back. That was how Mazur put it, "came back."

She used that phrase a lot. The Gardener's Cottage, which was rebuilt, "came back." Certain windows "came back." As if it were supernatural.

It can feel that way.

Passed from owner to owner over the decades, the Martin House complex suffered horribly. Its restoration has been miraculous -- and worth it.

Wright was so proud of the Martin House that he displayed the plans for it at his studio, near his drawing board. Scholars esteem it as perhaps his finest Prairie School project. 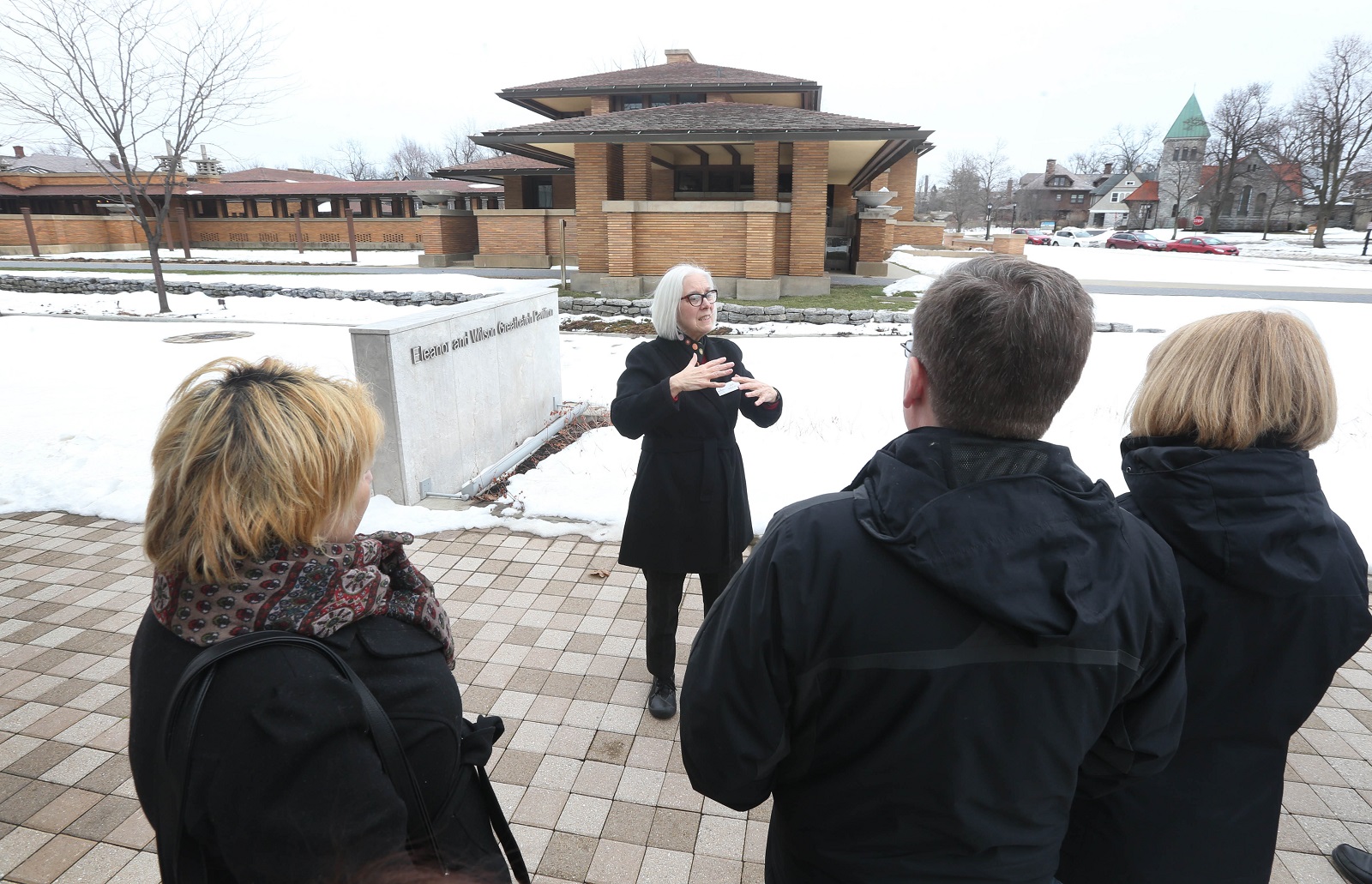 The house stands also as a tribute to Darwin Martin, one of America's great artistic patrons.

What a legacy this good and generous man left Buffalo. And with this house, we bid him farewell. Unless we run into him on one of our remaining 100 Things. Seeing a play at the Shaw Festival, for instance. Or, heck, standing in line for ice cream at Anderson's. We can almost picture it happening.

We know him so well. 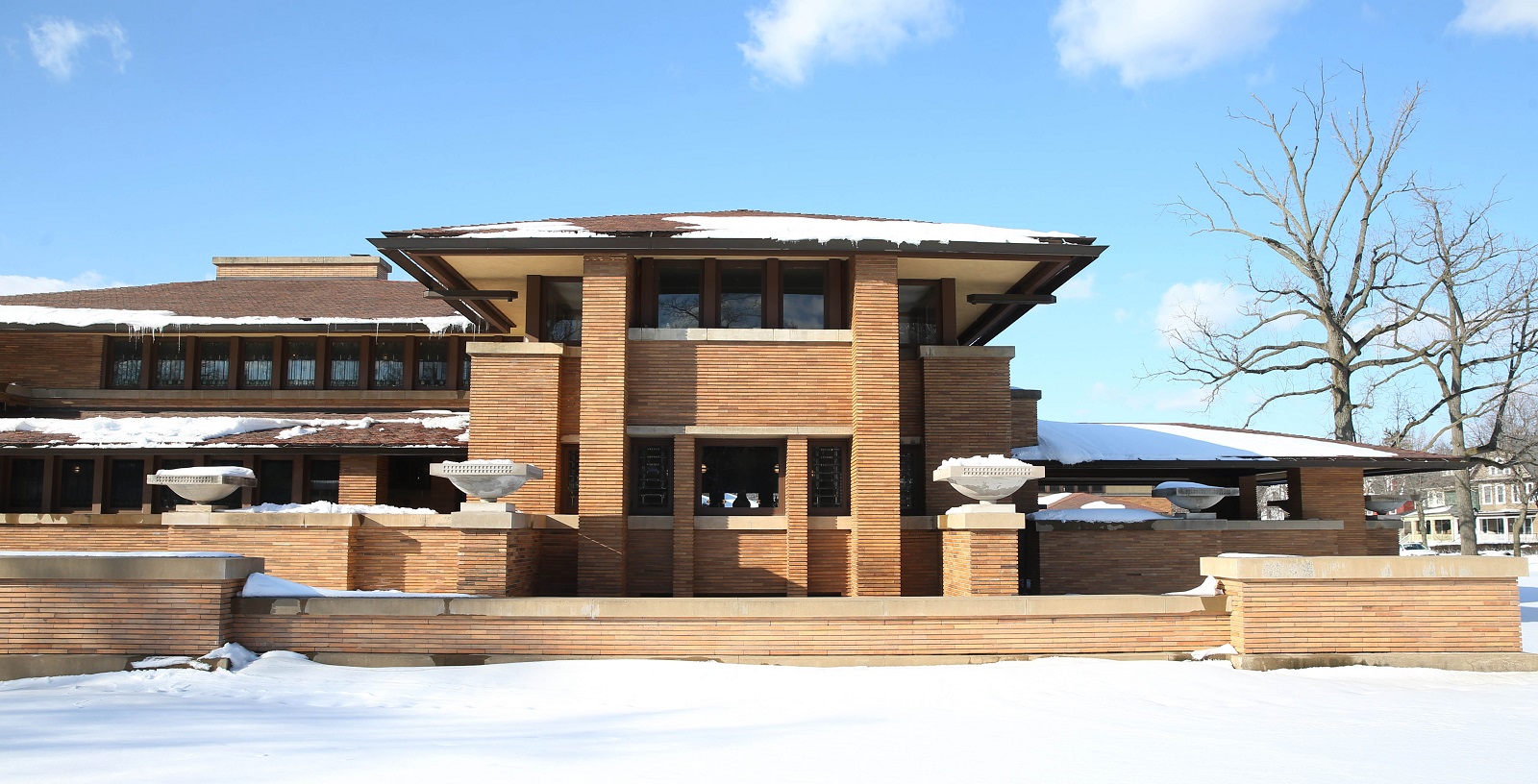 The Darwin Martin House was designed by renowned architect Frank Lloyd Wright and completed in 1905 for Darwin Martin and his family. The multi structure estate is a National Historic Landmark which receives visitors from around the world. (Sharon Cantillon/Buffalo News)